Queen Christina of Sweden: why did this cultured, powerful leader abdicate? 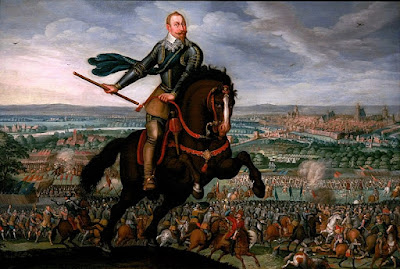 King Gustavus Adolphus
fighting in Battle of Breitenfeld, 1631
Christina of Sweden (1626-89) was born in Tre Kronor castle, only surviving child of King Gustavus Adolphus and Maria Eleonora of Brand­enburg, last of the Vasa dynasty to rule Sweden.
King Gustavus had made Protestant Sweden into a great European power. He was a major leader in the Thirty Years’ War (1618-48) from 1630, a conflict that changed the balance of power between Catholics and Protestants across the Holy Roman Empire.

Anticipating his death, Gustavus got Parliament to swear an oath to his daughter, securing her royal inheritance. He organised a Regency Council of 5 men, led by trust­ed Lord High Chancellor Axel Oxenstierna. Luckily Gustavus got it done, since Christina's mother was unstable.

When Gustavus died at Battle of Lützen in 1632, Christina became queen at 6. Oxenst­ierna & the regents governed Sweden until 1644 when Christina reached adulthood.

Christina was passionate about the arts & sc­iences. Sweden was un­sophisticated, com­pared to the famous cultured courts in Rome and Par­is, and the Queen dreamed of transforming Stockholm into the North’s cultural capital. After reaching her majority in 1644, Christ­ina made a name for herself as a dedicated collector, spending on scientific instruments, drama, music and art, and sending her agents out to purch­ase treasures across Europe.

But Christina clashed with Oxenstierna and actively tried to ignore him. In 1645 the leaders in the Thirty Years’ War agreed to meet for negotiations. Oxen­­stierna wished to continue the conflict, which had given Sweden significant territorial gains. But Christina disagreed and sent her own delegate to conclude peace uncond­itionally. The Peace of Westphalia was eventually signed in 1648; Christina was powerful and Oxen­stierna was bitterly disappointed. 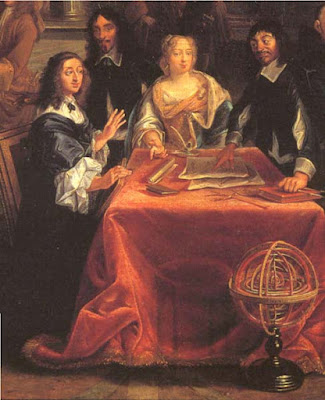 Queen Christina studying with Descartes
by Pierre-Louis Dumesnil the Younger
New World Encyclopaedia
The Queen created one of the greatest libraries in Europe and leading scholars, theologians, scientists and philosophers were invited. In 1649, she invited French philosopher René Descartes to Stockholm to establish a new scientific academy and become her private tutor. But when Descartes arrived in a Swedish winter, he discovered that the Queen could only meet with him at 5am. Anyhow Descartes died from pneumonia in Feb 1650.
In 1649 the Queen frustrated her advisers by refusing to marry and have babies, and she named her first cousin Charles as heir presumptive. Combined with her masculine behaviour, posture, hair, humour and cl­othing, it quickly led to rumours regarding her sexuality. Many bel­ieved Christina had an affair with her lady-in-waiting Countess Ebba Sparre aka Belle. The two women frequently wrote to one anot­her and shared a bed together. But note the Queen also arr­anged Sparre's marriage to Count Jakob Kasimir De la Gardie.

Christina long wished to convert to Catholicism, which had att­racted her since youth. A free-thinker, Christina doubted Lutheran teachings and was frustrated when Sweden’s conserv­ative clergy refused to con­sider reform. But she was the head of the Swedish Lutheran Church, and conversion would conflict with her Queenly responsib­il­it­ies. The fact that Gustavus had fought and died for his Protest­antism made his daughter's wishes even more troub­ling.

In 1651, Christina had a nervous breakdown. She attempted to abdicate but relented when her council pleaded with her to stay, even as a single woman! Nonetheless in 1654 the Queen restated her desire to abdicate, to the distress of her advisers, especially Oxenstierna. 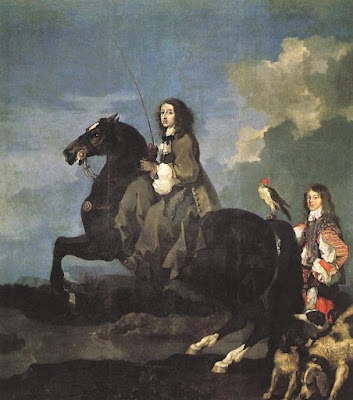 Queen Christina on horseback,
1653-4, Prado
Negotiations continued with the Riksdag regarding the Queen's future financial security, and she was granted a handsome pension. Meanwhile Christina secretly arr­an­g­ed in 1653 for some of her valuab­les (books, statues, paintings, manus­cr­ipts) to be sent to Antwerp.

In 1654 Christina finally ann­oun­ced her ab­d­ic­ation. The cer­em­ony was held in June 1654 at Uppsala Castle. The Queen wore all of her royal reg­al­ia which she ceremonially removed, item at a time. Then Charles ascended the throne as King Charles X Gustav.
At the Sweden-Denmark border, Christina cut her hair and wore male clothes, to disguise herself. Then in Brus­s­els, she privately con­verted to Catholicism, to avoid controversy back in Sweden.

Yet the ex-Queen soon wanted a new throne!! Was she bored? Regretful? In 1656 she neg­ot­iated with French Chief Minister Cardinal Mazarin, wanting to become Queen of Naples, if France conquered the kingdom from Spain. This would have restored her rule, and it would have allowed her to become financially independ­ent from Swe­den. But while staying at Font­ainebleau Palace, her hopes failed.

18 months after abdicating, Christina arrived in Rome to great fan­fare. Her welcome was planned by Pope Alexander VII who saw her con­version as propaganda for the Catholic Church. Fire works, banquets, operas and jousting honoured her for a month; then Christina attended Mass with the Pope, to receive the Holy Sacrament.

In Rome Christina lived in Palazzo Farnese, devel­oping her artistic patronage, supporting scholars and artists, and founding Rome's first public theatre. She started a literary salon for music, poetry and literature, which became the Pontifical Academy of Arcadia in 1690.

Christina’s very close relationship with Cardinal Azzolino created gossip and strained her relationship with the Vatican. Despite abdicating to convert, was she any more obedient to Cathol­ic­ism than she’d been to Lutheranism?

After King Charles’ death in 1660, she returned to Sweden to resume the throne, if Charles’ 5-year-old son-successor died. However the thought of Catholic Christina governing a Protestant realm was terr­ible. She later thought of becoming Queen of Poland aft­er her cousin John II Casimir Vasa abdicated, but this also failed. 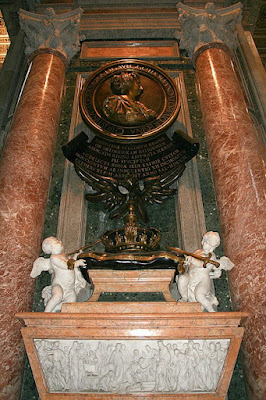 Christina's monument,
St Peter's Basilica
Christina returned to Rome in 1668, busy with artistic patronage and writing. She died at Palaz­zo Corsini in Ap 1689 and was given a huge cere­m­ony to thank her for sacrificing her throne for Catholicism. She lies in St Peter's Bas­il­ica.  Some recommend Christina Queen of Sweden: Restless Life of a European Eccentric by Veronica Buckley.

I could understand why Queen Christina wanted to abdicate, each time to proposed it. She didn't want a husband and children, she felt intellectually deprived in Sweden, she couldn't convert to Catholicism in Sweden and so on and so forth. But when she finally achieved all her goals, why search for another crown for herself?

I can but guess. Christina had throughout her life been treated with the deference due to a ruler and wanted it again. Plus she was one of the most adventurous royals, be it for military, cultural or scientific reasons. So Spanish Naples was a realistic possibility.

But on the second journey back from Rome, Pope Clement IX's supported her to take another crown, that of her Polish cousin John II Casimir Vasa. How would she have tolerated Poland???

To her credit she was a good patron of the arts, but really, talk about having a bob each way.

Christina was already a keen collector in Sweden of musical, science and art treasures. And she created one of the greatest libraries in Europe. But it wasn’t until she settled in Rome that Christina developed her artistic patronage, supporting scholars, artists and theatre people.

I think she was put on earth NOT to be a queen, but to run a famous literary salon.

It seems to me Queen Christina was an unstable person, and not fit to be a ruler. She abdicated from her throne in Sweden, then wished to be Queen of Naples, next thought of becoming Queen of Poland. What for? Her wish to convert to Catholicism despite her father's heritage, was also weird.

Hello Hels, It must be nice to decide to be a monarch, then take your choice of major European crowns. A long time ago I saw the classic movie about Queen Christina with Greta Garbo--I need to see it again, but it was a remarkable performance.
--Jim

it must have been a tough life, losing her beloved dad at 6, having a loopy mother and no other relatives in Sweden. No wonder she became an intense scholar and intellectual, to protect her from the misery outside her brain. But yes I agree. She was often guided in her decision making by what looked like impulses.

one of my measures of being a true intellectual is the ability to speak and write different languages. Queen Christina used Swedish in normal daily use, Italian as her second daily language, then German, Dutch, Danish and French for her regular travels. She didn't need a translator apparently. Queen Christina's own measure was to allocate 10 hours a day to her own studies, with tutors and visiting scholars!

Greta Garbo was wonderful, and very sympathetic to Queen Christina.

thank you. I don't have many powerful women to use as role models in history writing, so I am delighted when I can write about Queen Christina. Even when she clearly made some very bad choices.

She did well in her role of supporting the arts. Maybe she realised too late that it was her position as Queen that allowed her the freedom to pursue her own interests.

What an amazing individual. Sound a bit like a royal Vita Sackville West . I didn't know anything about her at all. I have been researching a very distant relative who was a writer of religious protestant books in this period . He seems to have travelled from Northern Poland to Sweden and then to Denmark where he became my umpteenth GGGGGGGG grandfather . This gives me some context to his travels and the history that might have determined his life choices .as always a great post .

while she was Queen, Christina had access to whatever finances she needed to live a very good life. But abdicating might have threatened her income flow, so she carefully negotiated for a Swedish pension that would be guaranteed for the rest of her life outside Sweden.

In Rome etc she continued to live the good life, but she was always at risk of the Swedish pension being reduced or cut.

having the money, time, language skills and inclination to travel constantly is something I have always envied. From Australia we are totally privileged if we can travel across Europe or Asia for 4 weeks a year, whereas your GGGGGGgrandfather could stroll across Eastern and Northern Europe, for business or pleasure, anytime he wanted.

Hi Hels - she had an interesting life - to put it mildly ... fascinating Queen - who used her intellect to further her interests, obviously at the loss to the Exchequer - were her purchases not part of the Crown's estate. Thanks for the read - cheers Hilary

"who owned her substantial purchases?" was a very interesting question. I suspect that the Riksdag was so keen to secure the Queen's future financial security, she was granted a handsome pension AND could take all her art, furniture, libraries etc with her. Only the royal reg­al­ia had to stay in the palace.