Ada Blackjack - a brave female Robinson Crusoe in the Arctic.

Alaskan-born Ada Deletuk (1898-1983) was an indigenous Inuit. They were a hunt­ing people, eating fish, walrus, seals, whales, car­ibou and bears. Ada saw, but did not learn hunt­ing and surviv­al skills. She moved to Nome and was brought up by Meth­odist mis­sion­aries who taught her Engl­ish, Bible studies, house­keeping and sew­ing. Colonised by Russians since late C18th, AK had been acquired by the U.S in 1867. 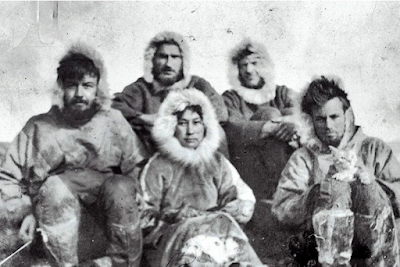 Ada Blackjack (centre front) and her four colleagues
on Wrangel Island, 1921
Photo credit: Oceanwide Expeditions
At 16 she un­hap­pily married a dog-team driver, Jack Black­jack. They had 3 children, two of whom quickly died be­fore Jack aband­oned 5 years old tubercular Ben­nett. The divorce left Ada without money, so she left her sick son in an orphanage and looked for work.
In 1913, Canadian anthropologist-arctic explorer Vilhjalmur Stef­ansson led a voyage into the Arctic. The team split and one group survived on the rich wild­life of Wrangel Island, 200 miles NE of Sib­er­ia. Stef­an­s­son pro­p­osed the idea of a Friend­ly Arct­ic, claiming the island for Canada and Britain as a way­station for those crossing via the frozen north. But the ex­p­edit­ion failed.

In 1921, Stef­ansson organised another expedition to Wrangel Island. The team had 4 young explorers: Allan Craw­ford 20, Lorne Knight 28, Fred Maurer 28 and Milton Galle 19. They planned to live on the uninhab­ited land, in order to claim the territory for the British Empire. The young men were all excited to go, but only Knight and Maurer knew any­th­ing about Arctic surv­ival.

In Sept 1921 the team sailed on the Victoria from Seattle to Nome. In Nome, Stef­ansson was recruiting an Inuit to assist with camp dut­ies, an Eng­l­ish-speaking seamstress who could repair Arctic furs, coats and balacl­avas. Ada was terrified by polar bears, but they needed a skilled seam­stress, and in any case, Blackjack was financially des­p­er­ate!

Allan Crawford (20) was chosen as expedition leader because he had Canadian-British citizenship, necessary for a British claim for Wrangel Island. Crawford’s men immediately hoisted a British flag, stak­ing their claim for His Majesty King George. Excited Seattle native Lorne Knight had been on previous Arctic expeditions with Stefansson! 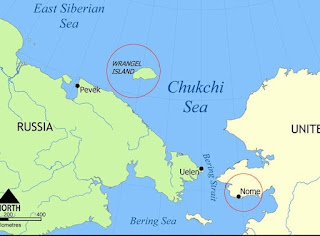 Nome USA and Wrangel Island Russia
Google map
Stefansson financed and organised, but did not join the expedition wh­ich called for the team to be dropped off on the isl­and and picked up by ship the fol­lowing year. So the team took only 6 months of sup­p­l­ies, relying on the oc­ean and island to meet their needs. The first months were optimistic - they set up camp and spent their days mapping the island or collecting specim­ens.
Assured by Stef­ansson that a ship would be arriving with more supplies in the summer, the team didn’t attempt to ration their 6 mon­ths’ worth of provisions, which they topped up with the island’s ample wild game. Ada cooked whatever the men caught, seagulls, foxes and polar bears.

But summer’s end saw a bad Arctic winter that brought endless dark­ness and no game. Knight show­ed little sym­p­athy in his diary, blaming the “foolish female for eating all of our good grub". How­ever they all knew that if they survived till summer, the rescue-ship would arr­ive with new team mem­bers and supplies.

After a late departure due to funding problems, the resupply vess­el Ted­dy Bear met the worst ice in 25 years. In Sept 1922 its captain mes­saged Stefansson that the rescue ship had been forced to turn back, propel­ler broken. Stefansson clearly was not overly-con­cern­ed, tel­ling reporters and expedition mem­b­ers’ families that the group was safe in the Arctic. He wrote a book, The Friendly Arctic (1921), saying that reports of the inhosp­it­able Arctic conditions were fake news. Game was abundant and those with common sense could survive, he wrote.

However it soon became clear that de­s­pite Black­jack’s best eff­orts, there wasn’t enough food to keep all of them alive. Knight had severely weakened, with ach­ing joints and sore gums; he knew about scurvy from his previous Arctic expeditions. In early 1923, with starvation looming, Crawford, Galle and Maurer made a tough decision. They started an ambit­ious trek back across the now-frozen sea to fetch help in Siberia. They set off with supplies and the 5 remaining dogs, but after just a couple of days, a vicious gale struck up and the men vanished forever.

Black­jack had to catch meat to keep the deterior­ating Knight al­ive, so she taught herself to shoot with his heavy rifle. For 6 months Ada was doctor, cook, hunter and lumberjack, but Knight const­antly yel­l­ed at her for caring for him bad­ly. When he died in June 1923 Ada coul­dn’t bury Knight’s body, so she built a prot­­ective wall from wild beasts.

Alone in such a vast, silent land­scape was overwh­el­m­ing, but Black­jack pushed on, filling her journal and worry­ing about her son Bennett. In the day she set traps for foxes and shot birds and seals. Even as she wept with frustration, Ada found solace in her Christian faith.

In Aug 1923 Ada heard a wh­istle, ran outside and saw the schoon­er Don­al­d­­son and crewmen wandering about on sh­ore. Salvation had arrived and her two-year ordeal on Wran­gel Is­land ended. 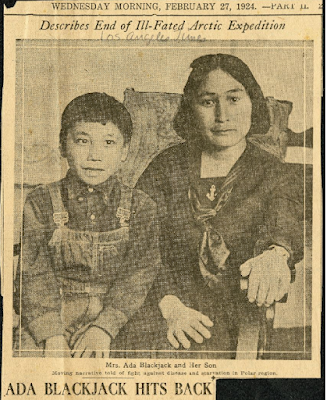 Ada Blackjack and her son Bennett,
Los Angeles Times, Feb 1924
Before leaving the island, expedition leaders had ordered her not to speak to reporters or else they wouldn’t pay her. But everywhere she went in Alaska, re­porters rec­ognised Ada and asked how this Robinson Crusoe had survived an ordeal so gh­astly it had killed the heroic male explor­ers. This very private woman finally spoke out only once (to defend herself against accusations she had not done enough to save Knight).
Ada made nothing from the many articles and books published subsequ­ent­ly. Ste­fansson wrote The Adventure of Wrangel Island (1925), ref­erring to Ada's story as the most romantic in Arc­tic history. She had another son, but finances forced her to place the two boys in care for years. She la­t­er moved back to Alaska, worked as a rein­deer herder and lived until 85. Ada’s family buried her in the Anch­orage Memorial Park Cemetery. 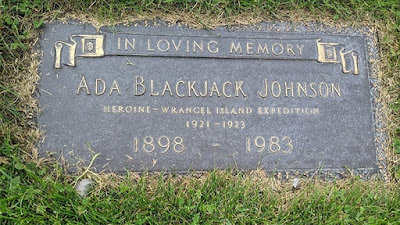 No food or other supplies for 2 years.. good grief. Was Stefansson ever tried for criminal neglect?

What an interesting story of a woman forced to become brave if she wasn't already. Imagine how much money she could be paid now to tell her tale.

Hello Hels, Ada Blackjack lived until 1983, plenty of time for her story to have been written out in her own words (probably helped by a co-author). An adventure story like hers would have sold well in any decade, and legal advice could have informed her about the legality of her original agreement, and how long it would last even if valid. Perhaps the problem was that the original book was written in 1925, and a few years after that the story would be forgotten and not fresh. Since Ada could not be expected to know about the intricacies of writing and publishing, I blame her story not being directly told on the lack of some enterprising author who had read the original reports and should have realized there here was an amazing story. Also, where was Robert Service throughout all this, who could have immortalized her in one of his Arctic poems--or perhaps he did.
--Jim
p.s. I might consider reading the 1925 book, but I am sure there are a lot of negative aspects--the deaths, bad conditions, broken agreements, etc. in addition to the interesting/inspiring bits. Wrangel Island seems to have been well named!

I read criticism about the 1913 expedition on the ship Karluk near Wrangel Island in Siberia. Even though he thought he made a major contribution to Arctic science, 11 of the crew tragically died and Stefansson blamed the ship commander.

But I cannot find any criticism of the 1921 expedition which again Stef­ansson organised to Wrangel Island. Not only was Stefansson delighted with the learning gained, there was no living witness to contradict him. Blackjack was alive of course, but for a time she was vilified in the press.

Blackjack faced some major problems if her own story was ever to be published:
1. She was a woman, hired only for her ability as a seamstress.
2. She was an Inuit, divorced, impoverished and with a child in care.
3. Her written English was uneducated and
4. Expedition organisers ordered her not to speak to reporters or else they wouldn’t pay her the wages she had earned during the expedition.

If you read "Ada Blackjack: A True Story of Survival in the Arctic" (1925) by Stefansson, I would seriously discount Stefansson's view about adventure.

Instead I would read Ada Blackjack: A True Story of Survival in the Arctic (2004) by Jennifer Niven. She had access to the team members' diaries and to Ada Blackjack's son.

It is quite extraordinary that both you and I should be writing about the Insuit people at exactly the same time.
I would be interested to read A True Story of Survival in the Arctic by Jennifer Niven and have made a note if it
I am amazed that Ada Blackjack surived to be 85 years of age having suffered so much deprivation for most of her life. But to have coped with the life she had she must have had an extremely strong constitution.

it is true that Ada Blackjack had a more deprived life than most people have ever heard of. She married a brutal man when she was still a child; lost 2 of her 3 children and couldn't provide medical care for the 3rd child; agreed to go on an expedition to an Arctic island to get enough money to get her son back one day etc etc. I am not a particularly fragile woman, but I could not have survived her early decades, let alone the two years of starvation and death on Wrangel Island. Ada Blackjack must have been braver and stronger Inuit than she had ever imagined.

Hi Hels - I'm sure I've come across her in the last few years ... not sure where - but her story rings a bell. I'm really interested in appreciating that part of the world - west Alaska/east Russia ... it's totally fascinating ... and I enjoy learning more about that part of the world and its history ... thanks for reminding me about her - all the best - Hilary

my history knowledge was deep but narrow, and although I knew a great deal about Russia and Canada, Alaska seemed to have escaped all the lecturers' attention. Good on you for knowing something about Ada Blackjack's story... I found it by accident in a journal of Canadian history.

Same with Rosemary's story in Where Five Valleys Meet. If it wasn't for the word Inuit in her blog, I may not have noticed an associated topic. Thank you to the blogging world :)

wow what a bunch of hubristic pompous young men . They couldn't hold a candle to her . What a woman .

mem
the official team members were selected because of their particular skills and passions. It didn't matter who the Inuit woman was, as long as she could sew and cook. Ada was on a hiding to nothing :(

Enjoyed reading your post on Ada, interesting additions to what I already knew, and great photos too. And thanks for reminding me about Jennifer Niven's book! I had planned on getting it... then forgot. Sieve-brain strikes again!
Joy V Spicer

I am delighted you wrote about Ada Blackjack two years ago:
https://www.joyvspicer.com/joy-blog/2020/2/28/ada-blackjack-unlikely-arctic-survivor?rq=ada%20blackjack It was such an important story to tell.