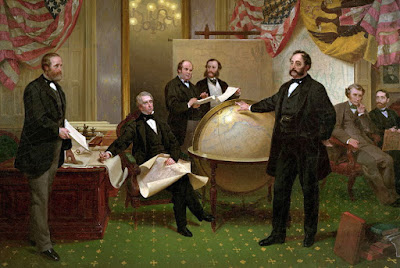 By 1732 Alaska was settled by Russian fur trappers and traders who expanded via Siberia and by the 700+ Russian Orthodox Church mis­s­ion­aries sent to build churches and settle in Alaska.
In 1741, Russia claimed Alaska as its ter­r­itory and over the years, established col­onies there. It also took advantage of Alaska’s natural res­ources, esp­ecially when fur trading became a boom­ing business. The Russian-American Co./RAC was a state-sponsored com­p­any, chartered by Emperor Paul I of Russia in 1799. It had the mis­sion of establishing new settlements in Russian Am­erica, trading furs and exp­anding colon­is­ation. After all Russia and Alaska were separated by the Bering Strait, barely 88ks at its nar­rowest.

Signing of the Alaska Treaty, 1867 (above)
Painted by Emmanuel Leutze.
Seward House Museum in Auburn, NY
Russia and Britain had been on opposite sides of the bloody Crimean War that lasted from 1853-6. British, French and Turkish forces had lined up against a Russian-Ottoman alliance. But the two nations were also struggling to increase their power in the Pacific Ocean.


Although the War had been concentrated on Russia’s SW flank, it also spread to the Pacific when a fleet of Russian cruisers based in Siberian ports threatened Britain’s trading links with Calif­orn­ia. A  combined British-French squadron was assembled at Hawaii and in July 1854 it set sail in pursuit of the Russian ships.

So Russia remained fearful of Britain’s Pac­ific ambitions. Van­couv­er Island, alongside western Canada, was already a British Crown Colony and the population of neigh­bour­ing British Columbia was in­creasing rapidly, as gold prospectors rushed to western Canada. Plans were ad­vanced to incorporate the territory into the Empire; Brit­ain’s colonies in Nor­th America would share a land border with Russia.

Russia felt pressure as both Britain and U.S expanded their power across North America. And as the Alaska territory was re­mote, sparse­ly populat­ed and und­e­f­endable, and as the fur trade dwindled, Russia began re-considering the value of its Alas­k­an land. But to whom would they sell Alaska? Canada was still a col­ony of Brit­ain and though the two territories shared a border, Russia and Bri­t­ain were still rivals.

Let us reiterate why Russia didn’t sell Alaska to Canada. Canada was not a sovereign nation in 1867! British Columbia could not have been a Canadian Prov­ince; it was still a British colony. In any case the Russians were very leery about Britain.
Why Did Russia Sell Alaska to the USA?
1) Security. After being defeated by Britain in the Crim­ean War, the Rus­s­ians would need funds to defend themselves again. Russia fear­ed that Alaska would be easily captured in any future battle with the British, so Emperor Alexander II opted to sell the col­ony. Al­though I am not sure this is true, Rus­sia apparently ap­proached both the British & Americ­ans in 1859. Br­itain's Prime Minister rejected the offer, so they turned to the Americans in­st­ead. But in 1859 the Americans were busy facing their im­pending Civ­il War.
2) Supply lines. The colony prospered under the Russian Governor Alexander Baranov and the fur trade th­riv­ed. The naval governors who took ov­er the company after Bar­an­ov expanded the company’s in­fluence to River Yukon where they look­ed for different furs. Af­ter exh­aus­ting the fur trade by the 1850s, the RAC had no sour­ce of income and depend­ed on supp­lies from Russia. After the Crim­ean War began, Turkey, France and Britain stood between Russia and Al­aska.

3) Natural Resources. The lack of resour­ces and tough condit­ions in Alaska made the sale inevitable. By the time Russia was selling Al­aska, gold had not yet been discovered. The California gold rush con­­firmed that if gold were to be found in Alaska, the Russians would be over­whelmed by Canad­ian and American miners.

After the Alaskan Purchase of 1867
Russia and Canada (orange); USA (cream)
After the Union won the Civil War in 1865, Pres­ Andrew Johnson was busy with recon­struction but Secretary of State William Sew­ard be­lieved that buying Alaska wou­ld divert locals’ attention from the post-war chaos. Interest was rekindled and the tsar in­st­r­uct­ed his ambassador to the US, Edward de Stoeckl, to begin for­mal negotiations with Secretary of State. Of course the potent­ial deal offered a great expansion of US territory, and a strategic location between Russia and British North America.

Alaska was sold to the USA in Mar 1867 with a negotiated treaty, known as the Alaska Pur­ch­ase, that was signed by Pres Andrew John­son and ratified by the U.S Senate. Alaska added 586,000 square miles of territory to the USA for at a mere $7.2 mill! In the same year, 1867, Britain estab­lish­ed the Dom­in­ion of Canada, moving the ter­r­itory closer to be­coming its own nat­ion.

When the Alaska Treaty was signed in 1867, the Russian minister Ed­uard Stoeckl was standing beside the globe and pointing to Rus­s­ian America while the US sec­retary of state, William Seward, signed the document. Many Russians quickly ret­urned home.
The Americ­ans who be­lieved that Al­as­ka was full of riches migrated into the territory, and after disc­ov­ering that they would need funds to mine, they realised the territory was not profitable for the U.S. Nonetheless U.S and Canada had a long, bitter dis­pute, because Britain was still controlling Canada's foreign relat­ions. This territorial dispute was only resolved by arbitration in 1903, favouring the American position; Canada did not get an all-Canadian outlet from the Yukon gold fields to the sea!
For decades the U.S largely ignored Alaska, which was govern­ed by military rule. Seeking a way to impose national mining laws, the U.S constituted a ci­v­il government in 1884. Sceptics had dubbed the purchase of Alaska Seward’s Folly, but the former Sec­ret­ary of State was vindicated when major Yukon gold deposits were dis­covered in 1896. Al­aska became the gateway to the Klondike gold fields, attracting many new settlers for the first time. Alaska’s strat­eg­ic importance was finally recognised in WW2.
Alaska went on to become the USA’s 49th state in 1959.

Hi Hels - I loved learning more about the Russian colonisation of Alaska ... when Peter the Great sent Vitus Bering on his expeditions to conquer Alaska. Also when living over on Vancouver Island I added to my general knowledge. It's all fascinating to learn about ... I'd add Inuit/ indigenous peoples to your list ... such an interesting area to get to grips with. Take care - Hilary

Helen what is the coastal strip of land in British Columbia going to Alaska? It looks Canadian, but clearly is not.

Very interesting as Alaska seems such a natural fit to be part of Canada. But there'd be Vikings in the very north of the continent much earlier.

I too knew about indigenous communities and the Russian colonisation of Alaska, especially regarding the work of Russian Orthodox missionaries and Russian fur traders. But in the references I consulted, there was barely a mention of indigenous families once the Russians went home. If you know of a good reference on the topic, do let me know.

What a strange thing, the Alaska Highway is. Its 2,700 ks were built to connect the United States to Alaska, via British Columbia in Canada, starting at Dawson Creek British Columbia (Can), then Whitehorse Yukon (Can) to Delta Junction Alaska (USA). I don't suppose the Canadians were thrilled, right in the middle of WW2 (1942), but their cooperation was of course essential.

did you see the series America’s Lost Vikings? Although I think the programme mixed up the early vikings and the later norsemen, inevitably plenty of relics survived in Alaska.It is a series well worth watching.

Canadian-American relations have always seems rather odd to me. I think the USA tends to mock Canada as being unsophisticated: if only they knew! On several visits to Canada I have thought of it as a place having the high standard of living of the United States but with the veneer of European refinement. I know that's simplistic but that's how it looks.
Have you seen Michael Moore's film Canadian Bacon? It's a satire in which, to divert attention (again!), the US declares war on Canada. It's hilarious!
CLICK HERE for Bazza’s continually capricious Blog ‘To Discover Ice’

I like Michael Moore's films in general, but haven't seen Canadian Bacon.

Back in the day, when the children were still school boys and we had limited financial resources, most of our social life consisted of dinner parties in friends' homes. One of the questions we had to think about then was "If Melbourne was destroyed in a giant bushfire, where would you like to live and why?" Most people discussed London, Tel Aviv, Vienna etc... but I chose Vancouver BC. I probably would still say that today.

I think it was an important formal ending to a long process, yes. Many other borders were decided largely by war.

Yes, I'd possibly choose Vancouver as well (I've got family there).
I forgot to mention previously that I think Emanuel Leutze famously painted Washington Crossing the Delaware

Leutze became quite famous for his big historical and military paintings *nod*. I actually prefer Signing of the Alaska Treaty because it is less crowded and, possibly, more historically valuable.

Definitely Vancouver. I went there after the Nixon putsch and it was the best thing since the Bay Area.

We can holiday in any place because at the end of the holiday, home beckons. But a permanent home for me would require:
a. A language I know - English, Hebrew and bad French
b. Coastal views and close swimming beaches
c. No snow ever and
d. A Westminster democracy... no dictatorial heads of state.

A very enjoyable post! I didn’t know Alaska had become a UN state so late in the piece. Drat, I’d love to see America’s Lost vik8ngs, bu5 my only strwam8ng service doesn’t have it. I wonder if it’s on Kanopy or Beamafilm?

America's Lost Vikings has had very good reviews and was on the Science Channel, Discovery Channel, Amazon shops etc. But the series ends in c1000 AD and will not prepare you well for Russian settlement in Alaska in the early 18th century.

My family was Russian before they divided up and went to Australia and Canada. Thus in writing this post, I must admit to feeling sorry for the Russians and the Canadians.