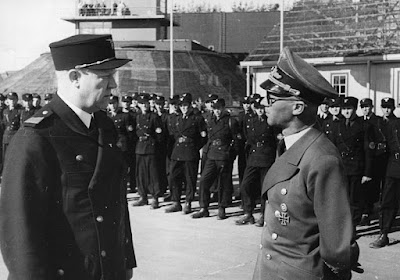 L] Quisling and R]  Reichskommissar Terboven, 1940
partnership of the paramilitary organisation, Hirden,
during Nazi occup­at­ion of Norway, Wikiwand
Vidkun Quisling (1887-1945) was born in Telemark, S.E Nor­way, son of a distinguished Luth­er­an minister and an heir­ess ship owner. His parents intended their studious son to have a mil­itary career, so he en­rolled in the Norw­eg­ian Milit­ary Ac­ademy. He was sent to Rus­sia to study and became Nor­­way’s mil­it­ar­y ex­p­ert on Russ­ian aff­airs. In 1917 he was a cap­tain and later a major.
Quisling also had a diplomatic career, as a military attaché to Petro­grad (1918-19) and to Helsinki (1919-21). Then Quisling repr­esented Norway on the League of Nations’ Dis­ar­mam­ent Committee, established post-war to settle inter­­nat­ional dis­putes. Later he assisted Fridtjof Nansen on humanitarian missions in the USSR and Armenia from 1922-25. Nansen was a famous explorer-dipl­om­at who won the 1922 Nobel Peace Prize. Then Quisl­ing served as a diplomat in Moscow. Luckily he met a Russian girl, Maria Vas­il­jev­na, in 1923, and they lived as a married couple.
In 1928 while in Armenia, he & his boss Frederik Pytz were ac­c­used of smug­gling millions of roubles onto the black market. Nothing was ever proved, but any sympathies he had for the Bol­sh­eviks began to wane. No matter! He was a diplomatic liaison for the Bri­tish next, since Russian-British relations were being facilitated by Norway. His work was re­ward­ed by having him made a Commander of the Order of the Brit­ish Empire. How ironic!

Quisling was Norway’s Minister of Defence from 1931-33. He and state attorney Johan Hjort then left the Agrar­ian Party to found the Fascist Nasjonal Samling-National Unity Party. Initially his party had the support of the Nor­wegian Ch­urch, so they had modest succ­esses in the 1933 el­ec­tion. But the party became more ext­rem­ist and Quisling feared that Norwegian Labour leaders were plan­ning revolution. So he banned unions, and eventually lost the votes.

Map of Norway, 1940
Naval History Homepage
Quisling befriended Nazi ideologue Alfred Rosenberg, visiting Nazi meetings together from 1937. Naturally Adolf Hitler plan­n­ed to conquer Eur­ope, before he and Quisling met in Dec 1939. But eit­h­er for power or for ideology, Quisl­ing was happy to negotiate for HIS country. Early in 1940, ex Defence Minister Quisling travel­led to Ber­lin to meet with Nazi command and gave the secrets of Nor­way’s defenc­es to the German agents. Although Norway had dec­lared neut­rality when WW2 started, oc­cupying Norway was a st­rategic and econom­ic necess­ity for Quisling.
He met Hitler just 4 days before the invasion; Rosen­berg documented Quisling’s proposal for wel­com­­ing the Germans. Quis­l­ing inform­ed Hitler that the Wes­t­ern powers were planning to occupy Nor­w­ay’s air bases eg the British would land at Kristiansand & Stav­ang­er. Quis­­l­­ing was willing to take over the bases and give them to the Ger­mans. The information earned Quisling 200,000 gold marks from Hitler.

With the invasion, Princess Märtha and the children fled Norway for the safety of the US. And when King Haakon VII and the gov­ernment dramatically escaped in April to the UK, Quisling stormed into Oslo’s radio station, an­nounc­ing the coup. In the chaos, he named him­self prime min­ister!
Early on, Norw­eg­ian Fascist forces were a 5th col­umn for the German invaders who occupied military bases. German warships en­t­ered ports and deployed thousands of  troops, cap­t­uring strat­egic points on the Norwegian coast. They cruis­ed past Brit­ish mines and local garrisons; aft­er two months of resist­an­ce, the last Norwegian and British def­end­ers were overwh­el­med and the country fell in June 1940. Hit­ler had driven all Allied for­ces out.

But resistance to Quisling continued, so in Sept 1940 his German mast­ers sent in Nazi Reichs­kom­mis­sar Josef Terboven. Ter­­boven was the high­est authority in Norway, reporting directly to Hitler, and Quis­ling was retained as a Norwegian figure­head. The re­l­at­ionship be­t­ween the two was tense, although Terboven saw an advant­age in having a Nor­weg­ian in power, to reduce comm­unity res­ent­ment. Quis­ling start­ed a repressive regime that was mer­ciless to­ any oppon­ents. So Norway’s resistance movement continued as the most ef­f­ective in Nazi-occupied Europe.
Anti-Jewish persecutions began after the German invasion. The Nazis ordered Norway's small Jewish community to hand in mem­­bership lists; Jews were barred from university positions and Trond­heim’s syn­ag­ogue, one of only two in Norway, was given to Ger­man troops. In June 1942, Quisling confiscated all Jewish property. In Oct 1942 Jewish men were sent to Auschwitz in Poland, then Jew­ish women in Nov. Of the 770 Jews deported, 740 were murdered. 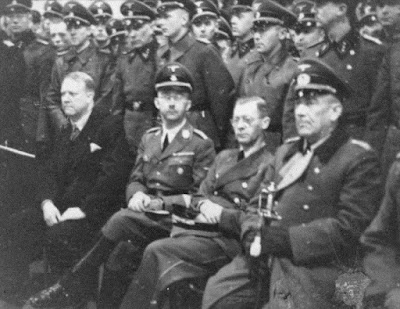 L->R Quisling, Heinrich Himmler, Josef Terboven, Commander Nikolaus von Falkenhorst
Behind: officers of the German forces in Norway, 1941, Wikiwand
Quisling tried to impose Nazi agendas on Norw­egian society, via news­papers and schools. The grand idea of German pro­paganda was that after centuries of "Western contamin­at­ion", Nor­way was finally finding its way home. He used all the methods of the Nazi machine: persuasion, brib­ery and torture. And he responded to general strikes and indust­r­ial sabotage with martial law and internment.
Despite his difficulties, Quisling remained Nor­way's Minister Presid­ent from Feb 1942-May 1945, while the elected cabinet of Johan Nygaar­d­s­vold was exiled in London. In Apr 1945 when Hitler died, thousands of German sold­iers were still stationed in Norway. Nor­wegian res­is­t­an­ce leaders accepted their surrender at Oslo’s Aker­shus Fortress.

Quisling was arrested in May with other Nas­jonal Samling leaders, tried for high treason, convicted and ex­ecuted. "Quis­l­ing" now means traitor in many European lang­uages, 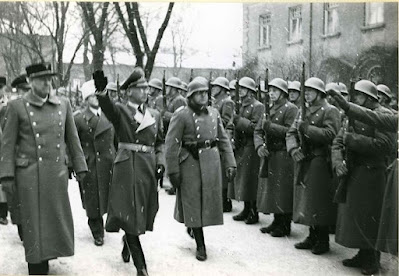 When Quisling said he "saved" Norway by planning the invasion with the Germans, and I am certain he believed it. But he didn't listen to what the monarchy, government and most Norwegian wanted. Even at his trial, he was still calling himself the saviour.

Hello Hels, Quisling sounds absolutely horrible. Unfortunately, he has his willing counterparts today. I think I have heard the term Quisling used in the sense of a traitor--it is absolutely fitting.
--Jim
p.s., To change the subject after such a serious article, Happy New Year! Let's hope it augurs in some improvements!

I had no idea of any of this history . I will investigate further . How interesting . Thanks Hels.

I am sure Quisling really did believe he was saving Norway. So he was either totally insensitive to the vast majority of the population or he couldn't have cared less what they thought. He wasn't the first self declared leader to ignore the monarchy, parliament and perhaps even the military, let alone the voters.

there were and are tons of "willing counterparts", even despots who started their careers as intelligent, caring teachers, poets or army cadets. The move to uber confidence in their own opinions only came later in life.

Brazil was the only army from South America to send men to fight alongside the Allies in Europe and its navy fought with the Allies in the Atlantic. Although this was very important to Britain and France, there was no way your countrymen and newspapers would have known about what was happening in Norway, Sweden, Denmark or Netherlands.

start by reading "Vidkun Quisling: A Short Biography" published in History Today, Vol 16, Issue 5, May 1966. But note that history always differs, according to which side wrote up the evidence. Even more so in the case of Vidkun Quisling.

This was wonderfully interesting, Hels. I am going to study the Norwegian resistance more closely. Thank you so much for including a link to my article about Princess Märtha.

He's had quite a career! I'm never really surprised when a politician is found guilty of treachery, corruption, and the like.

All Europeans understood that world war, so soon after The War To End All Wars, was an unbelievable tragedy. But even worse was Norway to be split in its response. King Haakon VII and the gov­ernment moving to the UK indicated their opposition to German invasion, at the same time as Quisling and his Fascist forces helped the German invaders to occupy Norway's military bases. What a tragedy.

It is very sad that we are so cynical about politicians' morality. But perhaps it was always so, when politicians were almost expected to be guilty of corruption or misuse of taxpayers' moneys. But treason was something else.. far worse.

There seems to have been no shortage of those ready to collaborate with the Nazis in every country. I think many found the idea of Fascism quite appealing, even romantic...
CLICK HERE for Bazza’s unnecessarily unique Blog ‘To Discover Ice’

that would be true in countries, agreed. And in Norway there was plenty of public evidence eg the paramilitary organisation Hirden was full of enthusiastic volunteers, not conscripts! I would add in the membership of the Norwegian fascist party Nasjonal Samling, except it was the only legal party during the war, so there was no choice.