I was very interested in the golden age of Dutch art and trade as impacted by Asia. Now it's time to examine fine Jingdez­hen porcelain as it was adapted by the French.

Chinese potters identified the essential clay ingred­ient for porc­elain, kaolin, the best sources being in Tibet and the Gobi Desert. The Chinese took this natural material and honed their craft over hundreds of years. By 1250 AD potters in Jingdez­hen in Jiangxi Province (see map below) had perfected the method. 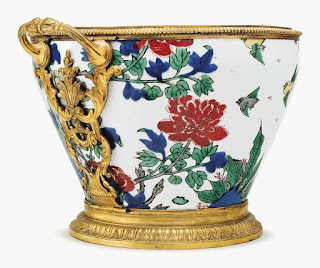 The Qing dynasty was established in 1636 and ruled China for 3 centuries. The Kangxi Emperor (1654–1722) was the 4th emperor of his dynasty and it was during his long reign that China's famous blue and white porcelain peaked. Powd­er­ed Blue enamel was a specialty of Kangxi’s era, adored by pres­t­ig­ious French coll­ectors.

European demand for Jingdezhen porcelain quickly grew because Europe did not yet possess the technical know­ledge required to make porc­elain. In fact 3+ million pieces were exp­orted to Europe between 1604-57; the Dutch alone imported 1,000,000+ pieces per year. The Chinese trade was so luc­ra­t­ive that the porcel­ain-making proc­esses were closely guarded - Jing­dez­hen actively excluded Europeans!

In the 1680s Kangxi Emperor reasserted imperial control over the Jingdezhen kilns, and the export of Chinese porcelain to Europe slowed down for a time. This interr­uption in supply led in part to renewed att­empts at European cer­amic centres to unlock the sec­ret Chinese ingred­ient.

70+ million pieces of Chinese export porcelain had entered Europe in the C17th & C18th and buyers were desperate for more. The most passionate were royals & aristocrats who coated their palace walls, floors and ceilings in White Gold.
Of course Europeans made vigorous efforts to learn the secrets of Chinese porcelain. A French Jesuit missionary moved to China in 1698, sec­retly entered Jingdezhen and described porcelain-making in letters he sent home. He said that in its peak, Jingzhen’s 3,000 kilns used thousands of locals in an manufacturing process that looked very modern. 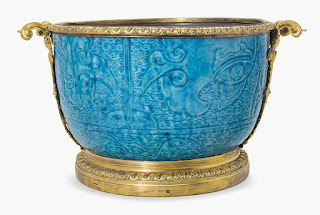 In Germany Augustus the Strong (1670–1733), King of Poland, Elector of Saxony and a Chinese porcelain fanatic, was desperate to crack the ancient Chinese secret. Augus­tus had been spend­ing too much of his annual royal budget on importing 30,000 pieces of porc­e­l­ain, and he wanted to create porcelain at home. So desperate was the Elector that he imprisoned alchemist Johann Böttger until the poor sod discovered porcelain’s secret ingredient. Finally large-scale European porcelain product­ion began in Meissen in 1710.
Mounted porcelain referred to pieces of unpretentious Chinese porc­elain, later embellished in precious or semi-precious European met­al mounts to make them more appeal­ing to West­ern collectors. See a colourful turquoise porcel­ain cache pot from Emperor Kangxi’s reign (late C17th) with French regency ormolu-mounts (gold coloured copper-zinc alloy c1725).

As the trend became more widespread from the early C18th, the mounts were increasingly made of gilt bronze, not silver. Clearly the C18th French rulers adored the most ex­quis­ite Kangxi specialties, using the original C17th Chinese centre-pieces and vas­es. They too conv­ert­ed them to French treas­ure by adding gold, bronze or ormolu mounts in the reigns of  King Louis XV (1715–74) and King Louis XVI (1774-93). 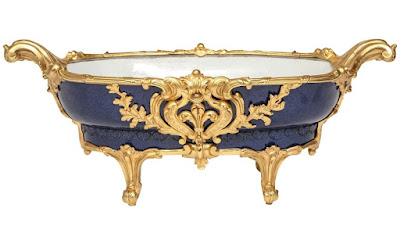 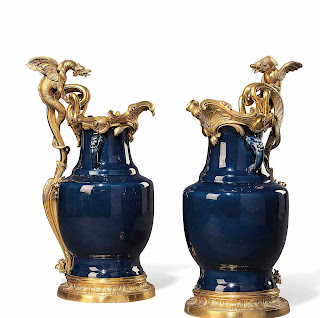 Ewers with dragons
48 cm high; 28 cm. wide
In a pair of Chinese powder blue porcelain ewers with dragons (1745-9), each ewer had a neck with scrolled acanthus and a side handle sur­m­ount­ed by a winged dragon. The dragon was a mythical creature which the French imitated and applied three dimensionally to the imported Chinese por­celains. Clear­ly these finely dec­orated and mounted porcelains were meant for classy European tab­les.

When the Europeans eventually developed their own porcelain factories, they often directly imitated Chinese porcelain, and also mounted the ob­jects with gilt bronze. So how do we know if the porcelain was Chinese? See a pair of early Louis XV ormolu-mounted por­celain cache pots made in the Meissen factory, although the porcel­ain clearly imit­ated Asian patt­erns. 11 cm. high. The mounts had a C tax mark applied in France on cop­per alloys during 1745–9, dating and locating the materials precisely. 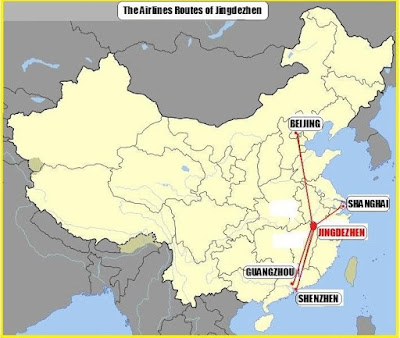 Beautiful objects, Helen. Can you buy porcelain in the usual antiques auctions?

yes, and I will show you just a few pages recorded in antique auction houses' catalogues. See the colours, shapes and prices of the export porcelain in:

Hello Hels, Back when I did research in the Cleveland Museum of Art library, I always checked through all the auction catalogues. Porcelains like these were sold often in sales of Chinese ceramics as well as sales of European decorative objects. Sumptuous as they are, I often think that these ormolu mounts are kind of gilding the lily. However, fine porcelains, despite such large manufacture, were prized by the Chinese also, and choice specimens in China when damaged were often repaired by mounting them in bronze or even solid gold.
--Jim

the ormolu mounts might well have been too much. But because Europeans couldn't make the porcelain art they adored and were therefore totally dependent on Chinese exports, the Chinese manufacturers would have created _whatever_ would have increased their successful industry.

I gave another example in the post. The important French coll­ectors spent a fortune on powd­er­ed blue enamel, so quite rightly it became a specialty of Kangxi’s era. The Chinese manufacturers were very clever marketers!

In 2021 when Household Management makes an Asian dinner, it is served in modern Chinese blue and white bowls, transferred to individual matching bowls using matching spoons and eaten with chopsticks, and all made in China. What an amazing success have Chinese porcelain and patterning been.

Agreed. Europeans were always totally convinced that Europe was cultivated, educated and creative, while the rest of the world was primitive and superstitious. Yet every time we discuss the invention of paper, coffee, printing, porcelain, gunpowder, fired bricks, rice, compass etc etc, we have to acknowledge how much knowledge and creativity came from Asia, South America etc.

Our Lady of Lourdes, intercede for me and my family, cover us with your sacred mantle, I thank you in the name of the father of the child and the holy spirit amen 🙏

בhinese emperors used to offer porcelain items as diplomatic gifts and that was very appreciated by representatives of foreign countries in China.
Nowadays, we strive for simplicity and minimalism; in those days,people were 'desperate' for the chinese luxurious porcelain items.
The turquoise porcelain pot in your post looks lovely!

thank you for reading the post, but I would be happier if you discussed Chinese export porcelain etc.

I can imagine in the days before kaolin was discovered and used in Europe (in Meissen in 1708), Europeans were gobsmacked to see beautiful Chinese porcelain art objects. I still am :)

If the porcelain art objects were too expensive for ordinary European families to buy, nations' consuls and aristocrats would have been delighted with their good fortune.

Hi Hels - there's so much for us to appreciate about how early technical skills were around many centuries and millennia ago. Lovely photos you've given us ... thank you - Hilary

centuries ago, and thousands of ks away, yes! The Fine Arts are almost always limited to paintings, sculpture and architecture. But at university my passions focused on gold/silver and porcelain art objects.

Luscious objets here, Hels! Yes, a gilding of the lily but the mounts are quite the works of art in themselves. I do wonder how many pieces of the precious "white gold" were broken as the the European smiths learnt how to attach the metals to their prizes.

Ormolu or gilt bronze was the method the French used to apply finely ground, high-carat gold–mercury amalgam to an art object. The gold coating allowed the French to give a classy European finish to the Chinese export porcelain. So the goldsmith had to be VERY careful with the porcelain he was decorating.. his career depended on it!

Hello again, Here are a couple examples of Chinese-produced metal mounts, quite different from the elaborate European specimens you have shown, but more for protection or repair. The second link may take some time to load, but is a remarkable high-resolution, interactive view of a Ru-ware vase with repaired rim.

Parnassus, Helen thanks you because she had not seen those metal mounts before. She said that as lovely as the Chinese metal mounts were, they were far too early for the export porcelain products that were sent west in the 17th and 18th centuries. The Chinese produced metal mounts were totally fine for protection or repair, but not for French glamour.

Prized porcelain seized by Nazis goes up for auction. A collection of highly valuable Meissen porcelain once owned by a German-Jewish couple before WWII is being auctioned in New York. A public exhibition of the works will open at Sotheby's in New York on September 7, a week before the auction.

The timing is perfect, many thanks.

This is the first time I am visiting your website. I would like to tell you that I am genuinely engaged by reading your blogs. Keep up the good work!

When I was still working, I found beautiful Chinese porcelain to collect. Retirement has been relaxing, but alas porcelain now has to be admired in galleries.