Lord's, the centre of world cricket.

The Hambledon Cricket Club played in Hampshire, until the club moved to Dorset Fields in Marylebone becoming Maryle­bone Cricket Club/MCC in 1787. The first match took place that year and by 1788, the club had pub­lished its first Code of Cricket Laws. 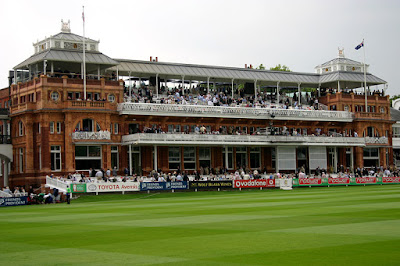 Lord's pavilion, opened 1890
Lord’s first cricket ground, owned by Marylebone Cricket Club, was named after its founder, Thomas Lord, who leased the Dorset ground and ran the club for 12 years. It closed in 1811 and Lord moved the turf and all the equipment to the second ground in North Bank.

The third Lord’s Ground moved to the current ground in St John’s Wood in London in 1814, which became the centre of world cricket. The initial match in the new ground took place that very year. And with the growing success of the game, Thomas Lord built the pavil­ion and refreshment stalls. Unfortunately the pavilion was destroyed by a fire in 1825.

After the fire, the new replace­ment pavilion was rebuilt and became one of the most famous land­marks in world cricket. This second pav­ilion at Lord’s Cricket Ground was built in 1889 and opened in 1890 at great cost, just in time for the new cricket season. Designed by Thomas and Frank Verity, note the brick with ornate pink terracotta facings and the long, two storey centre section with raked, cover­ed seating. Above, between the 2 end pavilions capped with pyramidal roofs, were ornate wrought and cast iron lanterns. Like the rest of Lord’s, this Victorian pavilion was owned by Marylebone Crick­et Club-MCC and served the England national cricket team.

The first International Test match played at Lord's was between Eng­land and Australia in 1884; Aus­t­ral­ia lost. Australia's first test win at the grounds was in 1888. 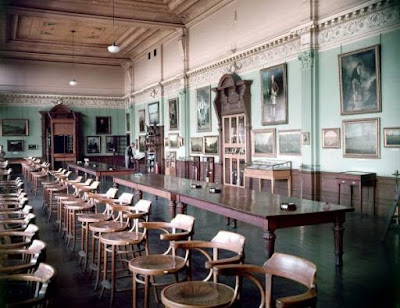 Until 1999 women weren't allowed to enter the pavilion in play, due to the MCC’s gender-based membership policy.

The Victorian building was grade II listed under the Planning Act 1990, am­ended for its special architectural or hist­or­ic int­erest. With con­servation in mind, the building was closed in 2004 for a major ren­ovation costing £8.2 million. The pavilion seating was extended to the upper levels and the Long Room was refurbished.

Players get into their Whites in the dressing room, and parade through the Long Room en route to the crick­et field. The pav­ilion was re-decorated with elegant Vict­orian feat­ur­es and the walls were lined with paint­ings of famous cricketers and ad­ministrators, from the C18th until today. For the few non-English players who have had their port­rait placed here, it was always a great hon­our. Only four Australian cricketers have ever been honoured in this way, natur­al­ly the most important being Sir Don Bradman. He scored an epic 254 runs on this ground in 1930, a record which lasted for 60 years. If a player successfully scored a cent­ury or took five wickets in a Test innings, their names appeared on the honours board in the dressing rooms.

MCC members and guests have free access to the room, with views of the ground through impressive sash windows. Inside the pavil­ion is like an elegant pub, with different rooms attracting people who soc­­ial­ise and watch the cricket. When there is no game, the Long Room is avail­able on a private hire basis for conferences and cocktail parties.

The Media Centre at Lord’s was commissioned in time for the 1999 Cricket World Cup. I don’t understand the technical details so I am quoting the experts. It was the first all-aluminium, semi-monocoque structural system building in the world, built and fitted out in two boat yards, using revolutionary boat-building technol­ogy. The centre stands 15 metres above the ground and its support comes from the structure around its two lift shafts, the same height as the Pavilion on the opposite side of the cricket ground. The lower tier of the centre accommodates 100+ jour­nalists, and the top tier has radio and tv commentary box­es.

The new media centre was designed by Czech architect Jan Kaplický. Kaplický considered this media centre his favourite creation because it was both a revolutionary design and an achieve­ment that users loved. In 1999 Lord’s media centre won the Roy­al Ins­tit­ute of British Architects/RIBA Stirling Prize, Britain’s most prestigious arch­it­ectural award. In 2000 Jan Kaplický became an Honourable Fellow of RIBA and in 2001 he won the World Architecture Awards.

The MCC Museum was originally opened by the Duke of Edinburgh, as a war memorial to cricketers who died in WW2. The centrepiece is the story of the por­celain Ashes Urn (a gift to Lord Darnley from Melbourne ladies dur­ing England’s 1882-3 tour of Australia) and an exquisite silver urn from manager Frank Laver’s successful tour of England in 1909. Famous cricketer Sir Ponsonby Fane ransacked all London’s art dealer shops, looking for crick­et prints and paint­ings, and building up the art collection. But now the picture gall­ery has many different types of exhibitions eg special bats and a mas­sive coll­ection of textiles: blazers, ties, caps, badges and cricket outfits. The newest MCC Museum was opened in Nov 2006. 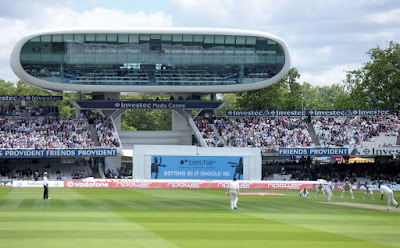 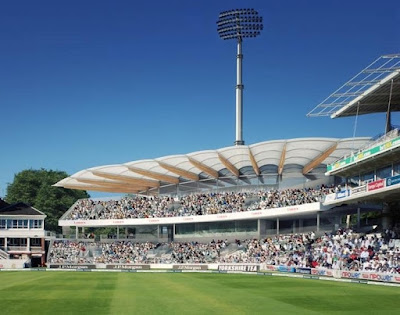 Despite the renovated pavilions, the modern ground can only hold 30,000 spec­t­ators, as compared to the Melbourne Cricket Ground with 100,024 seats. Thus increases in capacity and con­venience were needed fairly quickly. The Warner Stand was the first phase of MCC’s ambitious redevelopment of the western corn­er. When it opened in May 2017, there were 2,656 seats on two tiers on a steeper gradient than before, greatly improving sightlines.

At Lord’s Cricket Ground, each stand that surrounds the pitch had a separate id­entity, totally unconnected to its neighbouring stands. I thought this was awful, but the designers saw it as their main architectural challenge.

You noted a few years ago that The Times (1868) described the tourists as "the conquered natives of a convict colony’, a travesty upon cricketing at Lord's and the conquered natives of a convict colony." The Daily Telegraph said that, "nothing of interest comes from Australia except gold nuggets and black cricketers." Therefore we should not be shocked that there was initial reluctance from the MCC Committee to have the aboriginal cricketers perform at Lord’s.

The BBC said the tour faced resistance from the more conservative members of the British cricketing fraternity. Australian organiser Charles Lawrence was desperate for the side to play a match at Lord's, knowing acceptance by the MCC would lead to a rush of lucrative offers from other clubs.

But the Minutes of the MCC from 1868 show the Committee was dead against the idea of "tribal demonstrations" following any potential match, stating that the exhibition was not one "suited" for Lord's ground. The match was eventually agreed to and the Aboriginal side lost narrowly, but impressed with both their play and their "dignified conduct". Despite the MCC's misgivings! Nonetheless there followed a heated debate within the MCC Committee.

Hi Hels - it's a cricketing institution ... now we've got women commenters on matches ... things are improving and changing ... its history is fascinating. All the best - Hilary

I was listening to the women commentators at the Olympics (no cricket in Tokyo, of course) and they were both knowledgeable and respectful. The male commentators were mostly fine, but occasionally they would talk loudly over the top of the woman, ignoring what she was saying.

Hello Hels, Although it is nice, I probably won't be adding this building to my list of must-see sights in England. I have already suffered through too may of those interminable cricket scenes in British novels--even P.G. Wodehouse sometimes includes them.
--Jim

I know exactly what you mean. During the Olympics, I saw some sports that I knew nothing about (eg baseball, skateboarding, sport climbing) or didn't like (eg boxing, wrestling, weight lifting). But I want to know the history of the institution (in this case Lord's), its structures, the participants and the politics.

I lived for a few years in Britain, and went to Lord's and Wimbledon every summer. It was the link to home :)

An interesting post. I have been to Lord's many times as I used to teach cricket and one year we had the honour of playing on the main pitch ( not wicket) because Pakistan were playing on the practise pitches. What an honour.

I was once lucky enough to be invited as a guest to the MCC at Lords and it was a memorable occasion. Currently I am enjoying the Cricket 100 Tournament; I watched a match on TV today taking place at Lords. Do you see that in Australia? It's a fantastically successful format for getting more people interested in cricket.

Whenever something becomes successful, it gets destroyed by fire like that pavilion in 1825.
Nice refurbished long room1 I try to imagine the players in white passing through it on their way to the cricket field. Also as a place for cocktail parties.

I hope you had photos taken of your moment of glory :) I still have photos of my father at the Melbourne Olympic Pool in 1956 and have had lots of pleasure since, reliving the honour.

I am not familiar with Cricket 100 Tournament but I know that for many years, people have been keen to make the traditional 5-day matches shorter and more exciting. Lord's was a perfect location and atmosphere for televising a new and successful format of cricket.

The Long Room is suitable for a wide range of events, looking most beautiful when dolled up for a wedding. The view for the bride and groom is delightful :)

Thanks for the post . I have never "got" cricket and tests in particular . I just Don't understand the fascination with watching a small ball being batted, and caught in a large green paddock. I imagine playing it might be fun but watching it ??????...............No thanks .. I am quite sure the deficiency is me rather than the game as so many people just love it and it has been such a force for good especially in the commonwealth countries.

You are very perceptive! I wrote (but not yet published) a blog post that started "The spread of sports was a key branch of British cultural imperialism, much like trade, English language and Protestantism". Of all the sports I examined in the later half of the 19th century, cricket was by far the most important, especially in India, Pakistan, Australia, New Zealand, South Africa, West Indies etc.

It is hard to get past that women weren't allowed until 1999. That is not long ago at all.
I like this, "Players get into their Whites in the dressing room, and parade through the Long Room en route to the crick­et field".
Media Centres are so important now and commentators deserve good comfort and viewing.
While not something I've ever thought about, in the back of my mind I assumed Lords was named after lords and not someone called Lord. There you go.

Lord's and many other old British institutions tried to keep up their restricted standards for ever. The campaign to include women struggled on throughout the 1990s, and even when women were finally included, the change was resisted by many club longterm traditionalists.

If you were thinking of applying for membership, note the requirements: Each application has to be endorsed by FOUR MCC Members to support a person's nomination! And the price of membership is unthinkable.

Quite right. My Brasilian friends were very keen sports fans, but not cricket of course.

I enjoyed reading the history of the grounds and the buildings.

CherryPie
I was a regularish visitor years ago and loved the facilities and games, but there is something refreshing about analysing a well loved place historically.