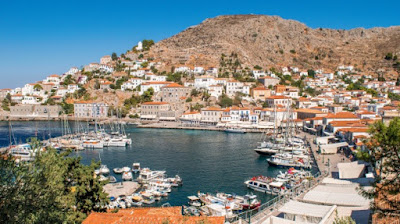 In 1951 Clift and Johnston left grey, post-war London for Greece. Set­tling first on the tiny island of Kalymnos and then Hydra, their plan was to live simply and focus on their writing. The result was two of Charmian Clift's best known and most loved books, the memoirs Mer­maid Singing and Peel Me a Lotus.

Peel Me a Lotus told of their move to Hydra where they bought a house and cop­ed with chaotic dom­estic life and three small children. The old well outside the walled garden was where the local women gathered wat­er. It looked so lovely it was easy to forget the poverty and hard work, the difficulties of bringing up children in sparse conditions, and the ominous evidence of Johnston’s emerging TB. But her nov­el was clearly set among the art­ists’ col­ony of which she and George were the undisputed leaders. At the same time, they were becoming the centre of an informal community of art­ists and writers, including other Austral­ians, Brits, Canadians, Americans, Germans, Scandinavians and Greeks. 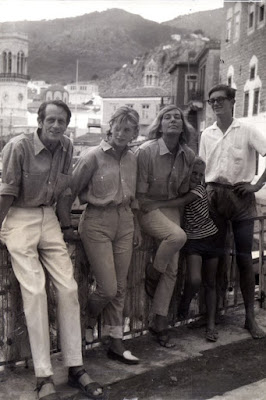 George Johnston and Charmian Clift with their family on Hydra 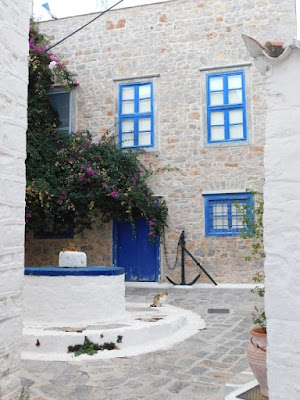 The Johnson family home
and community well in the square
Clift painted an evocative picture of the characters and sun-drenched rhythms of traditional, quiet life. The fascination with Hydra arose perhaps from the great Greek artist Nikos Gikas' beautiful paintings of his ancestral island.
Canadian musician Leonard Cohen (1934–2016) was inspired by George John­ston & Charmian Clift’s writing and lifestyle when he visited the Greek island of Hyd­ra in 1960. Cohen soon became their lodger, with his Nor­wegian girl­friend Marianne Ih­len (1935–2016); they invited him to stay and to work on their terrace. The Johnstons were doing ex­actly what Cohen hoped to do, living by their writing. In their de­cade in Greece, they published 14 books between them but finances were very tough. Cohen reported that the Austral­ians “drank more than other people, they wrote more, they got sick more, they got well more, they cursed more, they blessed more, and they helped a great deal more. They were an inspiration.” On Hydra, Johnston took a pen to the fresh manuscripts that young Leonard brought him, and taught him the value of fierce editing. It was he who encouraged Cohen to play his first concert of his own material. 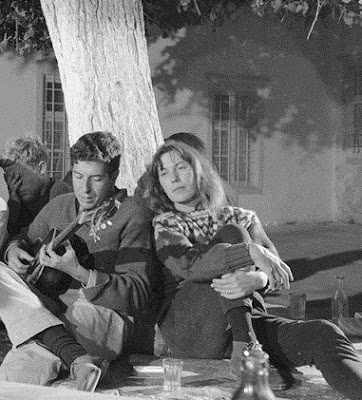 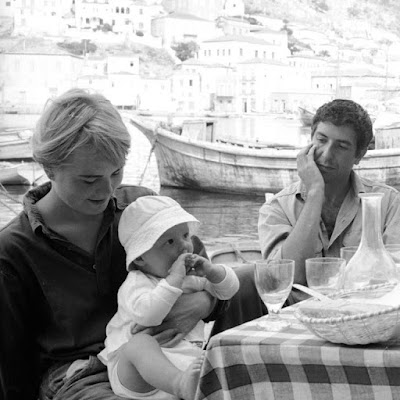 Marianne Ihlen Jensen and baby Axel Jnr (b1960) were dumped when her Norwegian husband Axel Jensen eloped to USA with a new wife. Leonard Cohen did as much step-fathering of the baby as possible. 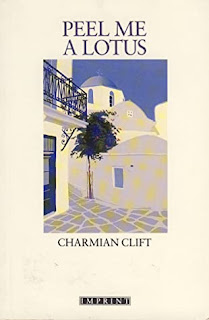 Charmian's book: Peel Me A Lotus
George John­ston wrote his excellent novel My Brother Jack (1964), a story of inter-war Melbourne. The plot copied the true murder story of 25-year-old schoolteacher, novelist and Boh­emian Mollie Dean, mistress of artist Colin Colahan. George Johnston never met the victim; only 20+ years af­ter the ev­ents did he become close to Cola­h­an. His book won the Miles Franklin Award in 1964, prov­iding enough money for George to return home; Charmian and their three children followed by ship as £10 migrants. The novel was serial­ised for the ABC in 1965.

Through her columns in Australia, Clift advocated for a bolder, more outward looking future; as someone who was naturally cosmopolitan, she was keenly interested in seeing Australia become more open to the world and bet­t­er integrated into the Asia-Pacific. She raged against compl­ac­ency! Sadly Clift suic­id­ed in 1969, an event that ended her voice while leaving behind thous­ands of loyal readers. George tragically died a year later from T.B.

There had been biog­raphies writ­ten about the Hydra expats and they wrote about the island them­selves. Now a new book has shown that there was more to be said. Half the Perfect World. Writers, Dreamers and Drifters on Hydra: 1955-1964 (published 2018). 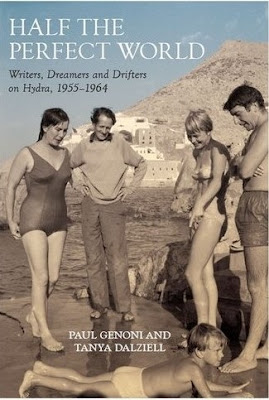 Half the Perfect World. Hydra
by Paul Genoni and Tanya Dal­ziell, 2018
Genoni added that writing Half the Perfect World got lucky when they dis­cov­ered a cache of 1500 photographs taken on the island by James Burke, a Life magazine photographer who was an old friend of Johnston. The best-known photo showed Leonard Cohen playing guitar with Clift and others under the olive tree at Douskos Taverna.

Years later, Cohen dedicated his 1980 Sydney performance to George Johnston and Charm­ian Clift who taught him how to write, opening with the Hydra-inspired song Bird on a Wire. And his mournful song So Long, Marianne which he’d written for Marianne Ihlen during their Hydra era

I've been to Hydra, a greek cosmopolitan island with a lovely harbor, fine beaches, picturesque little houses. I've got beautiful memories of the place.
What a tragic end to the couple of australian writers - suicide and TB!!

I read My Brother Jack in English Literature at school and was impressed. And even more impressed by Leonard Cohen's music. But I'd never heard of a connection between the two.

Nor did I know about Cohen's connection to Johnston and Clift. Very interesting that they made such a lasting impression on him, as well as educating him in some ways. It is unfortunate they died so young. They could have written so much more.

I am well travelled, but you have been to _very_ special places. The Greek Islands are all lovely but you had the pleasure of exploring Hydra..which I have only read about. Did you get a chance to photograph yourself next to the key sites described in the books?

Charmian Clift and George Johnston were such famous Australian writers that it doesn't surprise me at all that our schools selected their set novels from one or both of them. I remember being given Henry Handel Richardson novels for the very same reason.

But Leonard Cohen was a hero who most of us didn't learn about at school. When he was becoming famous in the mid-1960s, fans bought as many 78s they could afford or heard him on the radio. Thank goodness he visited us in 2009, 2010 and 2013.

in some ways, both Charmian Clift and George Johnston had long led unhealthy, hippy-ish lifestyles - serious alcohol abuse, depression, all night parties, no heating in winter and unrelenting T.B (George only). Perhaps read The World of Charmian Clift (1970).

I saw a film a couple of years ago, Marianne and Leonard, about life on Hydra. it did not seem a happy place to me. The children of the various hippies were left to their own devices and were actively encouraged into drug taking from a young age. I found the film totally off putting of the life styles portrayed and I did not warm to Leonard Cohen.

Even though the adults were keenly aware of George's sexual jealousy, both partners' affairs, fighting, lonely nights for the children with absent parents and alcohol abuse, I suppose we never really understand the significant damage parents can do to their children. This is true even for much loved children.

In this case, Clift suicided at 44 in 1969. Johnston soon died from TB, and two of their children died early, daughter Shane by suicide at 25, son Martin at 43 from alcohol abuse. What a tragedy.

Hello Hels, These books have been duly added to my list. From the other comments on this post, I will have to keep in mind that there can be a rose-colored glasses effect to looking back at such a time and place. I have done my share of editing, and can appreciate Johnston's advice. Most writing, like many plants, responds well to severe pruning.
--Jim

Hi Hels, I wonder how they felt when they landed back in Australia after life on Hydra? Was it GJ's health that brought them back? Not that a rustic Greek island is the zenith of the cultural experience, it still must have been an interesting transition, for many were still leaving these shores in droves through the 60s and 70s for that self-same reason.

both writers wanted to live in Britain and then both of them really wanted to live a new, alternative life style in Greece. I suppose since they lived a simple 1960s life style, they could cope well before their careers made decent money. But their hippy-ish life style suggested they valued other social and intellectual activities in any case.

Thus I agree with "the rose-coloured glasses effect", looking back.

The decision to return to Australia must have been a difficult, but sensible one to make. Johnston's new book My Brother Jack was looking good, but he needed to get off an isolated island to publish and promote it. And as his health deteriorated, he needed good quality health care at home.

Clift was drifting apart from her sick husband, and was thrilled to see her literary career boom in Sydney. Her regular columns in Melbourne and Sydney's best newspapers, as well as writing for the ABC, were going very well indeed. Alas it all ended with alcohol abuse.

I have added a beautiful photo of Marianne Ihlen met Leonard Cohen on a Greek island in the early 1960s, She already had a child (Axel Jensen Jr) from her husband, the man who ran away from Hydra and married his American girlfriend without leaving any money for his real wife. Fortunately Leonard Cohen helped to love and raise the little boy.

Alas Axel Jensen Jr had no father and no permanent home. When he returned from India, in 1977, he was seriously depressed, angry, drug-influenced and mentally ill (inherited by his biological father). He was admitted to the main psychiatric hospital in Oslo, where he has lived ever since 1979.

I love seeing the old black and white photographs.

I find myself agreeing. Black and white images appear to be more timeless. Even more importantly in the Hydra portraits, black and white doesn’t divert the viewer; we can view the emotional state of the model with less distraction.

H Hels - thanks for this interesting post ... I must look out some of their books ... I know so little about them - but did see the film Marianne - and I love Cohen's music and poetry. Thanks you've sent me off for the books at the library. Cheers Hilary

saying thank you is mutual! I have not yet seen the film "Marianne and Leonard: Words of Love", even though I was besotted for decades with Leonard Cohen's songs. The Guardian said the film's legacy was a catalogue of classic songs – So Long Marianne; Hey That’s No Way to Say Goodbye; and Bird on the Wire.

In October 1973 Leonard Cohen, 39 years old, famous, unhappy, and at a creative dead end—traveled from his home on the Greek island of Hydra to the chaos and bloodshed of the Sinai desert when Egypt attacked Israel on the Jewish high holiday of Yom Kippur. Moving around the front with a guitar and a group of local musicians, Cohen met hundreds of young soldiers, men and women at the worst moment of their lives. Those who survived never forgot the experience. And the war transformed Cohen. He had announced that he was abandoning his music career, but he instead returned to Hydra and to his family, had a second child, and released one of the best albums of his career. In Who by Fire, journalist Matti Friedman gives us a riveting account of those weeks in the Sinai, drawing on Cohen’s previously unpublished writing and original reporting.

perfect! Who By Fire is as moving in my mind now as it was back in the early 1970s. A riveting account of those weeks in the Sinai, yes indeed. But I hadn't remembered that Leonard Cohen went back to Hydra, nor did I remember that he had a second child. The most moving photo of Cohen in that war was in your article in Tablet.
https://www.tabletmag.com/sections/arts-letters/articles/leonard-cohen-songs-yom-kippur-war