AA Milne's childhood teacher was HG Wells, author of the 1897 novel War of the Worlds. Wells was Milne’s botany teacher, taking him and his classmates on field trips around the country. From the beginning, Milne was very interested in his outdoor experiences.

In 1913 AA Milne married Dorothy de Selincourt, daughter of the owner of the popular Swan & Edgar Department Store. After suffering terrible shell shock in WWI, he re-located his family to Ashdown Forest in East Sussex. Later he became a writer and editor of the satirical magazine Punch, and began writing children's poetry and literature, after son Christopher Robin Milne was born in 1920. 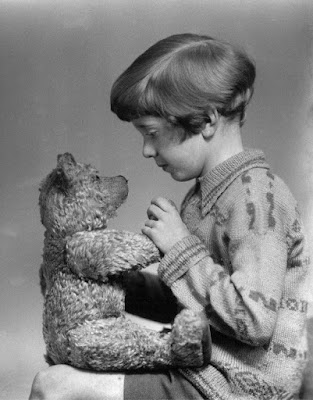 The best toy collection in London was inside Harrods Department Store. So of course AA Milne chose Harrods to buy his son’s his first birthday present in Aug 1921, a stuffed toy bear. This was despite the fact that Christopher's maternal grandfather owned Swan & Edgar, which featured its own kind of teddy bear called the Merrythought bear. 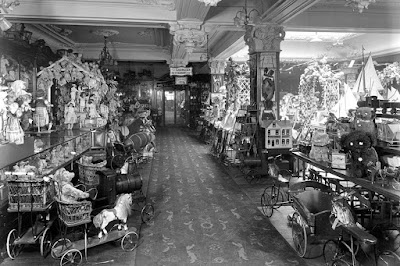 Christopher Robin Milne’s stuffed bear wasn’t named Winnie: he was first called Edward, the proper name for Teddy. But when Christopher was 5, his parents first took him to the Zoo. The little boy already loved his own brown bear toy and immed­iate­ly fell in love with the full sized bear at the zoo called Winnie. The more trips that Christopher made to the London Zoo, the closer he became to Winnie, and vice versa.

How did this big bear even get to London Zoo in the first place? Harry Cole­bourn, a Canadian officer and veterinary surgeon, brought the cub to England in 1914 when WWI broke out. Harry’s Winnipeg Regiment fell in love with this small ball of fur that became a part of the group and their mascot, and named her after Winnipeg. Sadly Harry had to leave her at the London Zoo temporarily when his unit left for France. Winnie became the star attraction at the zoo, and children absolutely loved her. 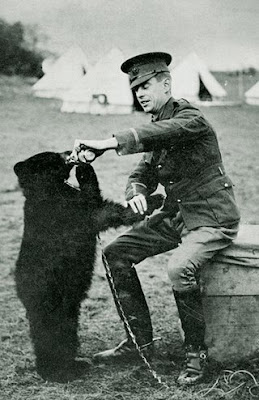 When Harry was returning to Canada in 1918, he wanted to ret­r­ieve his bear. But he made the decision to leave Winnie behind, because of the happiness she gave to zoo visitors.

AA Milne's inspiration for his stories definitely came from seeing his son playing with his beloved toys but they were not only the pro­d­­uct of Milne’s imagination. The author met his future Pooh collab­or­ator, illustrator EH Shepard, through an editor at Punch magazine.

AA Milne’s old neighbour reported how Shepard wandered around Ash­down Forest, the inspiration for Milne’s mythical woods. Then he turn­ed up at Milne’s home, and got drawing. The actual drawings occurred after many discus­sions and letters between Shepard & Milne, and visits to the Milne family home. Shep­ard first illustrated Milne's poetry collection When We Were Very Young 1924.

When We Were Very Young’s introduction traced the Pooh part of the name to a swan; Christ­opher Robin fed this swan in the mornings. Thus the name of Winnie the Pooh came from Christopher Rob­in, a combination of the names of a real bear (Winnie) and a pet swan (Pooh), and first appeared in print at Christ­mas 1925. Perfect timing for the book Winnie-the-Pooh, which was first published in Oct 1926!

Winnie the Pooh’s friends were received as gifts by Christ­opher Robin between 1920-28. As a result, Winnie the Pooh had adventures with Pig­let, Eeyore, Kanga, Roo, Owl, Rabbit, Tigger and Growler. These an­imals inspired the children’s classics When We Were Very Young 1924, Winnie the Pooh 1926, Now We Are Six 1927 and The House at Pooh Corner 1928. And the home of the Milnes, Ashdown Forest in East Sus­sex was the setting of the stories. 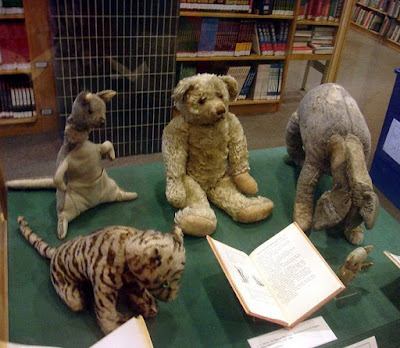 Images of the animal remain. A dungaree set for newborns from Harrods is decorated with a print of Winnie the Pooh outside the famous shop front. As part of the exclusive Harrods X Disney Winnie the Pooh collection, a plush bear is crafted with super-soft faux fur and wears his signature red jumper. And a children's satchel from Harrods has illustrations of the friendly bear, featuring a contrast buckle fastening and a matching shoulder strap.

Edward from Merrythought is Harrod’s replica of the teddy bear in a mohair coat and star of a major feature film. Goodbye Christopher Robin was a 2017 British biographical drama film about the lives of Winnie-the-Pooh creator AA Milne and his family, especially his son Christopher Robin. And Winnie the Pooh has made his way to the Vic­t­oria & Albert Museum where he set up his temporary home. The inter­active exhibition brought him to life via photography, letters, fashion and sketches, the master work of AA Milne and EH Shepard.

Taken to the USA in 1947, the toys remained with the American publisher EP Dutton until 1987, when they were donated to New York Public Library. For nearly 30 years before Walt Disney began anim­at­ing the bear, an American producer bought Pooh’s merchand­ising rights for the USA and Canada. In 1961, Walt Disney purchased the motion picture rights from AA Milne’s widow, thus beginning a memorable part of the Disney Empire. 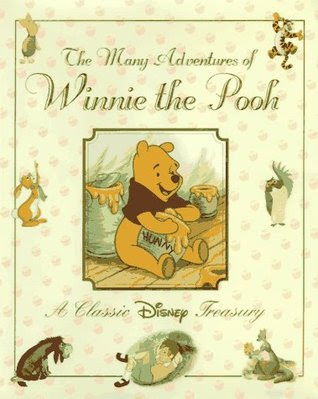 The Many Adventures of Winnie the Pooh
Disney publication, 1996

The cartoon shorts released in 1977 were The Many Adventures of Winnie the Pooh and the two 1980s television shows, Welcome to Pooh Corner and The New Adventures of Winnie The Pooh. There is a life-size bronze sculpture at London Zoo of Win­nie the Pooh which was unveiled by Christ­oph­er Milne in 1981. And there is a very sensitive Winnie-the-Bear and Colebourn statue in Assiniboine Park Zoo Winnipeg.

Pooh Corner is in the Ashdown Forest in Hartfield, East Sussex, as is Pooh Sticks Bridge. Winnie the Pooh and his friends' stories are a short walk away in 100 Acre Wood, and Piglets Tearoom is inviting. The Pooh’seum showcases the life of A.A.Milne, E.H.Shepard, Christopher Robin and Winnie the Pooh.

Hello Hels, I read that Christopher Robin Milne was traumatized by the publication of his childish episodes, especially that part about "Christopher Robin is saying his prayers," because the other children teased him so much. Apparently he and his father did not get along for decades after that. I think about this when reading other authors who tell in print about their children's embarrassing escapades while the children are still small (Jean Kerr and Dave Barry come immediately to mind.) But even having their house-training exposed in books cannot be as bad as that "saying his prayers" line for pure juvenile torture!
--Jim

I still have a few of my favourite childhood books and "House at Pooh Corner" is there, of course! The EHS illustrations are utter joy to me, so I couldn't countenance the Disneyfication of this little world and haven't seen any of the modern adaptations as a result but I'm sure this is where most of the enduring appeal can be attributed now, so it can only be a good thing. Christopher Robin might still be considered a wet girly for "saying his prayers" but it's lovely that he and his charming friends can still delight kids today.

I still love reading the adventures of Pooh and his friends :-)

Helen said that young boys often tease each other, sometimes in fun and sometimes in nastiness. The little boy was additionally traumatised by being sent off to a distant boarding school, so there was noone to protect him. The saying his prayers line seemed benign.

Like you, Helen loved reading these stories to her little children, but what happens in this generation? Do parents read at all to their pre-literate children these days? If they do, do they still love AA Milne stories?

CherryPie
Helen is impressed that you still read the adventures of Pooh and the others, in adulthood. However it was not surprising since she too remembers single lines and whole paragraphs from childhood reading, poems and songs.

Thanks for the history. What a pity Winnie and all ended up in NYC and didn't remain in their home country.

Helen and I both agree that the Victoria and Albert should have been the permanent home of the toys, letters, books and illuminations. Appropriately London and Winnipeg Zoos have their own very special sculptures.

Hi Hels - Pooh is an endearing character ... as are all his friends and his owner, Christopher. The illustrations are exquisite too. The museum and house in Ashdown Forest are wonderful to see ... while we used to play pooh sticks as kids - but in Cornwall! I often go through or past Ashdown Forest ... it's a beautiful area.

Milne wrote 'The Red House Mystery' in 1922 - which was his one and only venture into the genre of detective and mystery. The story is written as though inside the head of an amateur detective ... it's a real puzzle - and I need to give it another read. It's interesting.

All the best - Hilary

Many thanks for discussing Pooh Corner in Hartfield, Poohsticks and the bridge. Helen will add them to the post straight after the holiday.

A 2014 YouGov poll was carried out as part of a campaign to promote reading and support vulnerable children in the UK. In a poll of more than 2,000 adults, Winnie-the-Pooh has been named as the favourite children's book of the past 150 years. The first of the classic AA Milne books beat Lewis Carroll's Alice's Adventures in Wonderland into second.

Even though only British adults were questioned, Helen will be very pleased to hear that adults named Winnie the Pooh as their all time favourite children's book.

Thanks for your comments, everyone. Hilary, I am grateful for your additional information.

I sometimes wonder where you get this continual inspiration for Blog topics and how you manage to make nearly any subject interesting. I was once given a book called Now we are Sixty at the appropriate birthday. It was a pastiche of course!
CLICK HERE for Bazza’s altogether amatory Blog ‘To Discover Ice’

I have been lecturing and reading broadly in history and art history since 1991. As long as we don't go too far before 1600 AD, I am happy to use my old lecture notes and simply update the material with newer writing. Mind you, I know far more about the old British Empire, Europe, Russia, the Middle East and North America than I do about Africa and South America.

Thankfully my beloved/blogging partner knows everything there is to know about Medicine.

I have no other, professional competence. But as everybody seems to have an interest in music, literature, films, politics etc, without being professional I love putting my two bits in every so often :)