The mid-C19th growth of manufacturing in the NE cities increased demand for female labour. When newly ar­r­ived in cities, sin­gle wo­m­en had to find their own lodg­ing. Alas the much lower wages paid to fe­m­ale work­ers lim­ited their hous­ing choices to sharing ­rooms in board­ing houses. 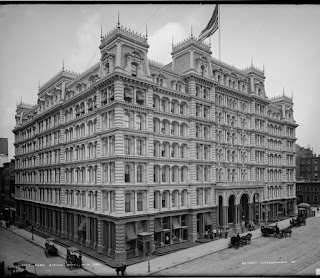 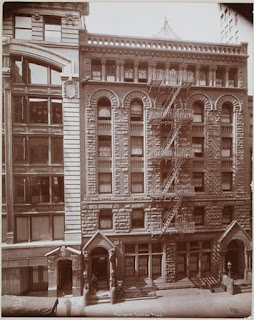 Margaret Louisa Home (1891)
Respectable citizens feared the number of single women liv­ing away from their families, unprotected and unsuperv­is­ed, ten­sions that cont­inued for decades. New York was one the first cit­ies to add­ress the chall­enge. From the 1860s wealthy and charit­able Christ­ian wo­m­en in the Ladies Chris­t­ian Union-LCU decided to provide Moral Homes at low cost for fact­ory work­ers. The young women had to be self-supp­orting, single and mor­al, obeying strict rules sup­ervised by the house matron. They had to keep her room clean, att­end morning prayers, eat break­fast and din­ner there, entertain guests in parlours and adhere to a 10 PM bedtime. Or be ex­pelled. The LCU’s idea of a Moral Home for well-behaved working girls became the housing model.

Now consider another model, proposed by the merchant Alex­and­er Stewart, whose shops em­ployed many young women. At that time, single women were never admit­ted to hotels, un­less acc­ompan­ied by a husband. Stewart stated his ho­tel would be for industr­ious young women, to foster independence in lodg­ing provided at decent rates.

The Hotel for Working Women (1878) in Park Ave stood in startling con­t­rast to the small and austere Moral Homes: it was a grand struc­ture, 7 storeys tall, an inner court­yard with a fountain and elegant marble-columned lobby. Inside it had 5 lifts, marb­le floors with carpets, 1,700 gas lights, com­m­un­ic­ation-tubes for staff, and hot and cold run­ning water. The upper floors had single and double rooms; the low­er floor had a dining-room, guest parlours and reading rooms.

When completed, the hotel man­ag­er reported 1,000 requ­ests for rooms! Sadly Stewart died bef­ore the Hotel’s completion, so it was soon sold and sadly converted into The Park Avenue Hotel that cat­ered to a large­ly male clientele.

NY’s Young Women’s Christian Association built the first building designed specifically for single working wom­en. The 6-storey Mar­garet Louisa Home (1891) in 16th St was for self-supporting Prot­estant women. Admis­sion require­ments to the Home strongly emphas­ised moral ch­ar­acter: the 110 applicants had to pro­­vide their name, occ­up­at­ion, church mem­b­er­ship and a mentor’s written supp­ort. Rent was pay­able in advance, no cooking or was­h­­ing was all­owed on the prem­ises and the house was lock­ed at 11PM.

Margaret Louisa was designed to have a home-like feel. The walls had warm, soft col­ours; par­lours were well fur­­n­ished with engravings, piano and read­ing lamps. The dorm­it­ory bed­rooms were too crowded with 3 iron bed­st­eads, wash basin, chest and shelf. While the single bed­room also had simple furn­ish­ings, at least each felt a more feminine space: flowers, pictures and personal items on the bureau.

It wasn’t until the new century that another NY women’s hotel was built: Hotel Martha Wash­ington. Designed by Rob­ert Gibson (1903) in the Renaissance Revival style in East 30th St, the 12-storey Hotel was designed to house bus­i­n­ess women in a profit-making venture. Organis­ed by Women’s Hotel Co., it was funded by investments from New York­ers like John D Rocke­fell­er. Its 416 rooms, which serv­ed both passing guests and permanent resid­ents, were ful­l! Actresses Louise Brooks, Veronica Lake and editor Louise Dew lived there. Free from paternalism, the hotel was the HQs of the Interurban Women's Suffrage Coun­cil from 1907.

In the hotel, professional women had no more restrictions imposed on them than in the best hotels. In contrast to the Moral Hotels, this hotel was explic­itly linked with feminist ideals of indep­endence, the ability to earn one’s own liv­ing, and present­ation of the guests as business people. It was a success and established a model for busin­ess women.

Note that a 1907 hous­­ing report, Problem of Living for 97,000 Girls, emphasised the restrictions and poor housing condit­ions working-class women suf­f­ered. So see The Trowmart Inn (1906). It absorbed the ideas put into prac­­t­ice at the Martha Washington but for the first time, provided relaxed housing for 250 young working-class women.

The Inn’s int­er­iors and furnishings were plain, but Trow­mart had a din­ing room, caf­et­eria, par­l­ours where the residents could entertain men friends, large par­lour with a piano, library and doctor’s office. Trowmart also had essen­tial working spaces: sewing room, laundry, drying room. Costs ran to $4.5-$5 per week, including breakfast and din­ner. 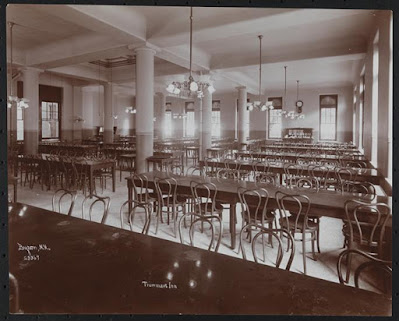 Dining room of Trowmart Inn, 1906.
Museum of the City of New York. 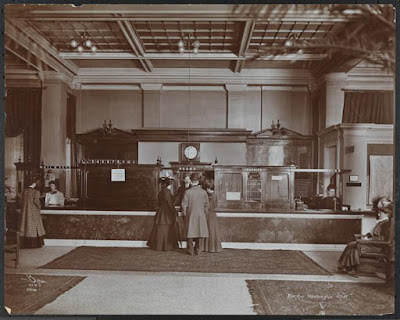 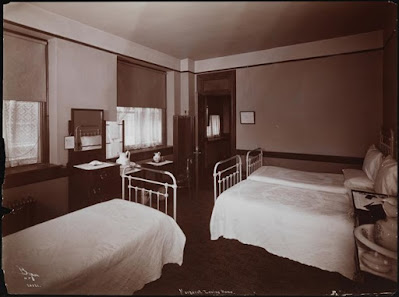 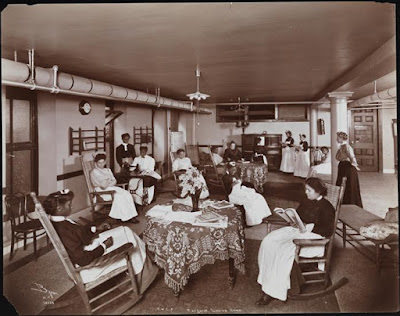 Margaret Louisa Home parlour,
fully staffed by women, 1907
Museum of the City of New York
The 1921 Panhellenic Conference, the national network of college sororities, turned its attention to an urgent local problem: lack of affordable housing for graduates moving to the city in search of jobs. Please check curbed for details.
Allerton Hotel (1923) in East 57th St was built for business and professional women but its bookings were filled before completion, with a long waiting list. So almost accidentally the most famous of the modern women’s hotels became The Barbizon Hotel for Women (1928) at 63rd and Lexington. One of the Allerton Group par­t­ners was the dev­el­oper, so the Barbizon copied Allerton in size, height and purpose.

The Barbizon emerged as a hotel for women who wanted a career in the arts, taking its name from a school of French artists. Barb­izon incl­uded artists’ stud­ios, music rooms and a rich programme of cultural events. There were facilities for entertaining, din­ing, reading and exercise. And elegant shops on the ground floor.
The Stock Market Crash in late 1929 & Great Depression ended construction of women’s hotels in NY. Eventually women-only residences ended. Photos: gothamcenter

Moral Homes were well named. Even parents who wanted their daughters to be carefully protected may not have needed that level of control.

Hi Hels - thanks for the history of the attempt to provide single women with housing, they did well and what they could in that era of paternalism. I wonder what would have happened if Alexander Stewart had lived longer ... just so glad I live in today's age - though understand it's still not easy, even in our first world countries, to be a woman. All the best - Hilary

Hello Hels, The 1960's movie, Thoroughly Modern Millie, was set in the 1920's and largely took place in such a working girls' hotel. Although very silly (sometimes to the point of being objectionable), it shows what living in such a hotel must have been like, with the interactions among the girls and the entertainments provided for them*.
--Jim
*Although real hotels of the type did not have Beatrice Lillie as the evil house-mother.

p.s. Although full of insulting Asian stereotypes, the producers did make some efforts, and objects labeled in Chinese (such as the laundry truck and the poison bottle) use correct (in form and meaning) Chinese characters, so at least that was a step forward.

I believe that the Ladies Chris­t­ian Union made a huge contribution to single women's ability to work in decent jobs in New York. I suppose if they had to stick to over-the-top rules in the first decades, then that was a small price to pay. Otherwise the conservatives who were already critical about single women living away from home would have closed down the Moral Homes (and all the others).

Disrespect for women and their rights have just about taken over Australian Federal and State politics this year, so I honestly agree with you we still have a way to go. Two Federal Ministers have lost their important ministries already, and two State Ministers are on their way out.

Undoubtedly the New York women's hotel owners could see a profitable growth-industry back then, but thank goodness for their foresight. Their hotels were well staffed, reasonably priced and had good shared facilities eg reading rooms, dining rooms.

I have never seen Thoroughly Modern Millie, set in 1922. But even if I had seen the film when it came out in 1967, I didn't know about working women's hotels back then. So now, 50 something years later, I will go back and examine the film with more learned eyes. Many thanks to you, sir!

By the way, when I did my Gap Year Programme overseas after high school and before university, my parents were delighted that there was a house mother in the girls' building. Little did they know :)

Most interesting. There must have been menfolk behind the hotels, with moral certainties and religion thrown and their own double standards. Matron type women were traitors to their own sex.

I was totally thrilled to do the research on accommodation for single working women, showing that even in a depressing period like 1860-1920s, women could pursue their dreams of proper employment in NY. Yes there was horrible religious and moral indignation opposing their freedoms, but overall, the women won.

I have not heard of working women's hotels so this was all fascinating stuff. We take so much for granted these days. It is good to be reminded of the difficulties facing women.

know him? I think of Mucha as my father in law :)

Agreed.. it is VERY good to be reminded that 1] women suffered throughout history and across all nations and 2] our generation cannot take anything for granted. Re the working women's hotels, I couldn't find much contemporary history written, so I largely relied on histories written in the last 20 years. Perhaps that suggests that there might have been some sort of embarrassment about the topic back then.