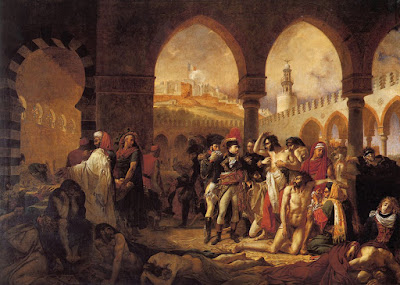 Napoleon Bon­a­parte Visiting the Plague-Stricken in Jaffa,
by Antoine-Jean Gros
My favourite summary of history blog posts used to be found in The His­­tory Carnival. This monthly showcase of blog writing was active from 2005-17, hosted at a different blog each month to provide a var­iety of perspectives; now the old posts are archived in Welcome to the History Carnival. Here are my favourite active history blogs. I have added an interesting paragraph from each suggested blog.
National Museum of American History
Tragedy thrust Rebecca Lukens into the family business, making her the nation’s first woman industrialist, owning an iron mill in the US in the 1800s. In 1825, at 31 and pregnant, husband Charles Lukens died unexpectedly. On his death bed Charles made Rebecca a promise she would take over Brandywine Iron Works and Nail Factory, the family business which he'd been running. While white women from less privileged homes increasingly worked outside of the home, especially in textiles mills, white middle class women had to prioritise homemaking and child rearing. Rebecca took over the family company, and learned the business first from her father and then from her husband. Though the Co. was nearly bankrupt then, Rebecca revived the mill and made it profitable.

Christopher Moore's History News Canada's prime minister says now is not the time to discuss the monarchy. It seems like a cautious statement, driven more by pollsters than someone who values leadership. Political scientist Prof Emmett Macfarlane recently wrote: it's useless, complicated, that changing the head-of-state situation in Can­ada requires a high const­it­utional threshold. Yes, the constit­ut­ional th­res­h­old is high. But that's insuff­icient cause for leaving the issue. Canadian sup­port for the monarchy is fragile. No one in Canada ser­iously believes the royal family has anything to do with Canada any more. Canadian identity is strong, and needs to be given exp­ression in our governing institutions. Britishness is no longer a part of it.
Dirty, Sexy History | When cocaine was released to the public as a pharmaceutical after the Civil War (1861-65) and the Franco-Prussian War (1870-71), morphine addiction was common among veterans with chronic pain. Like laudanum, another common op­iate, morphine was purchased without pres­cription. Cocaine was also available over the counter, and doctors encouraged it to fight morph­ine and alcohol addictions. In 1877, a doctor in the Boston Medical-Surgical Journal wrote: “Coca dimin­ishes weariness, strengthens the pulse, calms nervous excitement, and increases mental activity. Careful observations suggest that so far from being injur­ious, the moderate consumption of coca is wholesome and frequently beneficial.”
Imperial & Global Forum In 1894 Clara Zetkin wrote in her Social Democratic women’s magazine Die Gleichheit to polemicise against the main stream of German femin­ism. “Bour­geois feminism and the movement of proletarian women are two fundamentally different social movements. Bourgeois feminists pressed reforms, via a struggle between the sexes and against the men of their own class, with­out questioning capital­ism. By contrast, working women, through a class struggle, and in a joint fight with the men of their class, sought to transcend capital­ism. By 1900 German Soc­ial Democratic Party women held­ bian­n­ual conferences where the burning issues of the women’s movement were discussed. The German Social­ist Women’s move­ment became the International Socialist Women Movement's backbone
Mental Floss Unlike men, female artists in Renaissance Italy weren’t allowed to learn their craft by becoming masters’ apprentices. But that didn’t stop Sofonisba Anguissola from studying with other artists like Ber­nardino Campi, Bernardino Gatti and even Michelangelo. Anguissola became one of the few globally recognised female Renais­sance artists, thanks to her portrait skills. She did commission art for wealthy families, including for King Philip II, always pushing the boundaries of portrait­ure and rejecting patriarchal conventions of art through her paintings.
School of History & Heritage
Every year on 27th Jan, individuals gather to remember the millions of people murdered in the Holocaust, under the Nazi regime with their collaborators, and the Cambodia, Rwanda, Bosnia and Darfur gen­o­cides. In 1945, Auschwitz concentration camp was liberated by Soviet sol­diers & Stutthof was liber­at­ed in May 1945. Holocaust Memorial Day theme is Be the Light in the Darkness. The Darkness reflects mistreatment, persecution, misin­formation and den­ial. Being in the Light con­siders resistance, rescue, confront­ing den­ial and distortion.

The British Empire What was a colony: an  overseas territory controlled by British Government or organisations:
A] Company Rule occurred when private companies, capitalised from Britain, set up their own colonies as private commercial concerns.
B] Colonies were areas directly ruled by a governor on behalf of the British government and the Crown. The governor was responsible to London’s Colonial Office, the most common form of imperial control.
C] In Protectorates, the local leaders ruled domes­tically, but ceded foreign affairs and defence to the British government.
D] Dominions were granted significant freedom to rule themselves, becoming fully independent countries after 1931.
E]Mandates were set up after WW1 as German & Turkish colonies went to Britain & France to prepare for self government, for the League of Nations

Regency History  A quality unmarried lady appeared at a regency ball under the prot­ect­ion of a chaperon, usually an older married lady like her mother. It was the chaperon’s duty to ensure that her charge’s partners were el­igible gentlemen. A lady had to wait for a gent to ask her to dance. If she did not already know the man, before he could ask her to dance he had to request an introd­uct­ion; her chaperon might prevent this if she saw fit. At a private ball, the most suitable person to do introduct­ions would be the hostess. At a public ball, it was performed by Master of Cerem­on­ies.

Throughout History | Europeans have long held the Far East in awe, fantasising that count­ries such as China, India, Indonesia and Japan were magical kingdoms filled with wondrous and rare commodities: silk, porcelain, spices, tea, timber, dyes, ivory, tortoiseshell and jewels! Trade-goods like spices were exported from China and India across to Europe along a network of roads, rivers and coastal sea-routes which became known as the Silk Road. Commodities transported along the Silk Road were rare, exp­en­sive and stealable. Plus products took months to travel from Asia to Western Europe, and prices were HUGE! To keep costs down, European traders shipped vast amounts of exotic goods back to Europe by sea. But this was expensive, dangerous, and time-consuming, with a round-the-world voyage taking nearly a year! Since the discovery of the Americas, Europ­eans tried to find a faster, easier route to Asia. 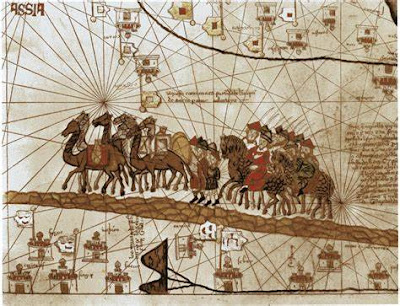 Victorian Paris |  From May 1889-June 1890, an influenza pandemic swept over the world. Called Asian or Russian Flu, it was one of the deadliest in history, killing a million of the world’s population of 1.5 bil­l­ion. The dis­ease was first reported in Bukhara Central Asia in May 1889, reaching the American continent in Dec 1889. Never before had a virus spread so quickly. With the rapid growth of railway transport and sea travel, humanity was no longer safe from a pand­em­ic. The treatment was chaotic - strychnine, large quantities of whisky, salt, lin­seed, glycerin or quinine, all unhelpful.

The History Blog Los Angeles’ J Paul Getty Museum is the new owner of a prev­ious­ly unknown painting by Baroque painter Artemisia Gentil­eschi. It depicts the Roman heroine Lucretia just bef­ore she plun­ges a dagger into her heart. Raped by Tar­quin King of Rome’s son, she demanded her relatives avenge her honour, then killed her­self before them. Her act spurred the tyrannicide of Tarquin by Lucius Junius Bru­t­us and the Roman Repub­l­ic’s base. The Bar­oque era pain­t­ing is in exceptional condition, untouched by time, poor storage or restorat­ion.
Margaret Rodenberg In the middle of a worldwide pandemic, too many of our leaders twist suffering and science into propaganda. See the same thing in Napoleon Bon­a­parte Visiting the Plague-Stricken in Jaffa, by Antoine-Jean Gros (1771–1835). In it Bonaparte makes propaganda from a plague by heroically comforting his plague-stricken soldiers. Fellow officers and a doctor attempt to hold him back from fatal danger. But did Gen Bonaparte really risk his life and did he deserve this heroic portrayal? Although no one knew that fleas spread the horrific disease, they knew the plague was cont­ag­­ious.
And find:
Historian on the Edge,
Love of History,
Unique histories from the 18th and 19th centuries,
The History Girls and
A Bit About Britain which is excellent.
Do you have a different favourite? Let me know.

Thanks for asking me. I particularly like European History, published by Yale University Press Blog. Have a look and see what you think.

Because the posts are written by different academics, it might be a bit tricky for the reader to make links. But the search function should help.

I enjoy "SciHi" very much, "a daily blog on science, tech and art in history".
Go to: http://scihi.org/

The posts are very frequent, long and detailed, so I have to concentrate more than usual. But when I find a topic that is relevant, it is worth all the effort.

spot on! I have been very grateful to SchHi regarding their research into the history of medicine, pandemics and war surgeries. I think we are learning more history now than we did at university many decades ago.

Hello Hels, There is so much history to be unearthed and written up, and most of it fascinating. I am a little afraid to subscribe to too many new blogs because it can easily become overwhelming, but I plan to explore today's post in more detail later and see if any make the cut. I used to like the Grumpy Art Historian who analyzed art auctions, but we haven't heard much from him recently. I did have a bad experience lately with something called the Ohio History Connection, which seemed tailor-made for me. However, it turned out to have nothing to do with Ohio, and instead was all about national issues such as women in science or Covid--not even the Ohio angle, no elements of history, and I am bombarded by these topics constantly, anyway. I will be unsubscribing soon, so will have a vacancy to fill!
--Jim

I used to enjoy Grumpy Art Historian also. Thankfully those blogs that stopped in earlier years .. are mostly still available on line.

By subscribing to a new blog, do you mean merely adding the name of the blog down the side of your own blog? Or do you receive email notifications every time a new post appears? Most people only have time and/or energy to read a limited number of other peoples' posts each week, so I would unsubscribe to every blog that doesn't add to your life.

And I have a word limit in mind. Each post grabs my attention best if it has no more than c1000 words. I don't have the focus to read a complete PhD thesis in a blog.

Hi Hels - there's so much to learn from the museums, blogs, programmes, films etc and we're still learning about our various histories. Reading/thinking about - we can get a kernel of knowledge ... which then grows - blogging has encompassed so many areas of life - I've learnt so much. Thanks for these links to various resources ... all the best - Hilary

When I was lecturing, I had to cover pretty much whatever history subjects the Department gave me.

Now I am free to discard whatever reading (history books, journals and blogs) doesn't tickle my fancy. Now I can focus my attention only on subjects that are fascinating. And as you also found, blogs have been essential in this process.

Many thanks. Do you read any history blogs? Can you recommend any?