The Sonderfahndungsliste GB/Special Search List was known under the popular name of the Black Book. This was the Nazis’ potential arrest list, drawn up for the period immediately after their inevitably successful invasion of Britain in 1940! Similar lists were drawn up for, and actually used in the USSR, France and Poland, but the only place in the British Isles that experienc­ed these round­ups was in the Channel islands. 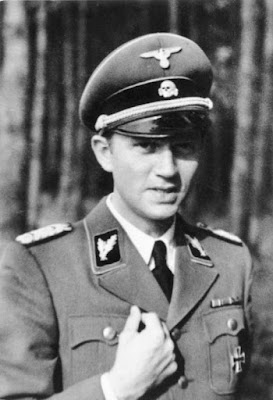 SS General Wal­t­er Schellenberg
Wiki
The 2820 names in the list included politicians, writers, in­telligence agents, scientists, artists and refugees, drawn up by SS General Wal­t­er Schellenberg’s office. Schellenberg was to become the Police Chief responsible for Britain after the invasion, and the main Ges­t­apo off­ices would be based in Birmingham. The book would have been issued to the Einsatzgruppen of SS men who followed the reg­ular Nazi forces into Britain. The planned invasion never happened, largely be­cause of the Battle of Britain cul­min­at­ing in Sept 1940 with air sup­remacy retained by the British RAF, and the nation’s powerful navy. 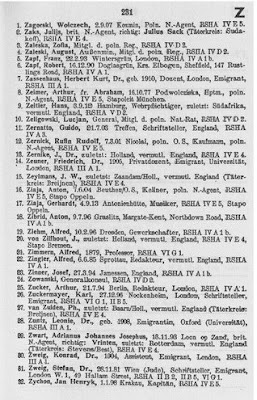 The list noted the crimes that each included Briton was suspected of having carr­ied out, and which German Department(s) would investigate. Based on what was learned about the Holocaust and concentration camps in 1942, some Britons would obviously have had more to fear than others eg Jews, Communists and ex Nazi defectors. Also in 1940 there were 450,000 people born Jewish in the UK, all of whom would have been seen as enemies to the Nazis.

How did the Germans get the names? Although there were some glaring errors (eg people who had died) on the list, most information seemed to have been gathered from newspaper reports, telephone directories and pub­lished works of the 1930s period. [Note that on his capture in 1945, Gen Schellenberg alleged that a leading British intelligence agent had given the Nazis much of this information].

The Black List was contained in a booklet discovered in the Berlin headquarters of the Reich Security Police in Sept 1945, after the war ended. As well as the individuals named above, a special section listed 35 British publicat­ions whose offices were to be seized immediately, records con­fiscated and executives arrested. They included Daily Mirror, Daily Express, Daily Herald, Daily Telegraph, News Chronicle, Observer, Spec­tator, Yorkshire Post, Sunday Post, Sun­day Chronicle, Sunday Pic­torial and Picture Post. This work was originally compiled after the fall of France in May-June 1940 and from then on, appeared to have been annually revised. 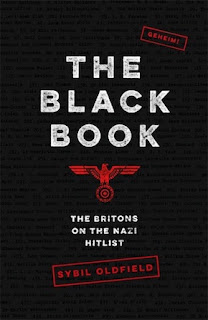 The Black Book by Sybil Oldfield
The Britons on the Nazi Hitlist. 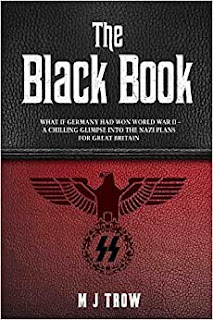 The Black Book by MJ Trow
A chilling glimpse into the Nazi plans for Great Britain
Now The Black Book: The Britons on the Nazi Hitlist (Profile Books, 2020) has been very well written by Sybil Oldfield. Historian Oldfield’s pub­lish­ers said: In 1939, the Gestapo created a list of names: the Britons whose re­moval would be the Nazis' first priority in the event of a success­ful invasion. Who were they? What had they done to provoke Germany?

Oldfield was inspired to write the book when accidentally finding Virginia and Leonard Woolf listed, during an art exhibition. Not surprisingly, more than half of the listed names were natural­is­ed Jewish and other refugees, many of Britain's most gifted, humane inhabitants. Note the writers EM Forster and Virginial Woolf, humanit­ar­ians and religious leaders, scientists, social reform­ers Marg­ery Fry and Eleanor Rathbone MP, and artists Jacob Epstein and Oscar Kokoschka. By examining these targets of Nazi hatred, Old­field revealed why the Nazis feared their influence, shed light on the Gestapo worldview and revealed a network of truly exemplary Britons: visionaries and unsung heroes.
Thousands of the booklets were printed but their warehouse was bombed; only 2 originals were found in Berlin in 1945 and displayed in Imperial War Museum London and Hoover Institution Library-Archives, Stanford Uni.
Posted by Hels at 13.4.21

Zweig, Freud, Virginia Woolf and Kokoschka, understood. But what did Lady Astor do to offend the Nazis?

Note that Lady Astor was quite pleased about being in the Black Book. She said it proved to the British who distrusted her that she had actually been pro-British and anti-German, before and during the war.

Hello Hels, Wal­t­er Schellenberg's story is all the more scary knowing that there were British people who often had great money and power and who were waiting to aid and abet him in his plan. Giving your own country away, especially to an enemy like the Germans, is the worst perfidy of all.
--Jim

Agreed :) There are only 2 copies of the book still held in public collections. I will add Imperial War Museum in London and Hoover Institution Library in Calif to the post.

If Schellenberg and his team used intelligence from their own officers based in the UK, I might have been more understanding. But imagine planning arrests, gaol sentences and executions based on newspaper reports, telephone directories and 1930s literature. Just as well the planned invasion never happened, both for those Brits who aided the Germans and those Brits who loved their own nation.

I understand the Nazis wanting to create an arrest list of enemies inside Britain, for when the German invasion would be successful. But once the list was first published in 1940, I wonder if the mistakes were corrected and the omissions were added in 1941 etc.

Mind you, that was just the Black Book in Britain. What happened to the Black Books of arrests and perhaps executions in the other countries that the Germans invaded or wanted to invade?

and amazing that it survived, both from intentional destruction by the authors and from unintentional war damage.

Good point about other countries. Too awful to contemplate what might have happened.

Because of what happened in other nations, we can be sure that this book would have been put to use had there been a successful invasion. I probably would not have been born if that had happened! Of course, the Allies would have had a list of suspected war-criminals, many of whom were tried and some executed after the war but that list was of deserving cases.
If you have Amazon Prime, they have shown a drama series based on Philip K. Dick's 1962 novel The Man in the High Castle that deals with what might have happed had the Axis powers won the war. Two-thirds of the United Stated was controlled by the Nazis and the rest by Japan.
Incidentally, I wonder if Lady Astor's name was in the Black Book as a double -bluff?
CLICK HERE for Bazza’s innocently insolent Blog ‘To Discover Ice’

Poland was also actually invaded (in 1939), and they too knew a lot about German arrests and deportations.

It seems to me that the invasion of Britain would have been relatively easy. The RAF probably couldn't have prevented as invasion, since the greatest threat was at sea. But alas for Britain, as the 1940 invasion "deadline" approached, just a minority of the British fleet’s most powerful ships were protecting the homeland.

Philip K Dick's book asks an excellent, but tragic question - what would have happened, had the Axis Powers won the war? I ask my husband the same thing - his mother and his father were the only survivors from their large sibling groups :(

this is a vital history story that will continue to reveal itself. I love blogging :)

Hi Hels - I remember reading about this and finding the thought horrible ... thanks for reminding us all - Hilary

I am fascinated by the blog posts on this website. Many thanks to “ Hels” for giving me such a beautiful blog post. By visiting your blog we are getting advanced level information about “Architecture” and we have learned a lot. We will be benefited more if you create a blog post on Home Design. I do a lot of research on Home design and I have another website that publishes about Architecture.
Architecture

In late 1930s Britain, it was difficult to predict whether the uber conservatives would win the fight against a declaration of war with Germany Vs those who were very worried about Britain not having enough military capacity Vs those would never, ever collaborate with Germany.

This must have been such a difficult time.

Many thanks :) At the bottom of this blog are the key terms that have been discussed in my posts since 2008. Look for architecture, paintings, decorative arts, gardens etc.

Thank you for sharing this great idea!

Many thanks for reading about The Black Book. But no advertising please.

I just found this topic and have high hopes for it to continue. Keep up the great work, it’s hard to find good ones. I have added to my favorites. Thank You.

I too find it difficult to locate primary historical sources, especially when they were hidden or destroyed during the war. I am always grateful when readers send references to my blog.