Marie Sklodowska Curie (1867-1934) was born into an intellectual family in Warsaw. After her father lost his teaching job due to his political activism, the family struggled fin­ancially. Her sister died of typ­h­us and then she lost her mother to TB.

Clever Marie was educated locally and got some scientific training from her father. Girls could not attend univer­sit­ies in Poland, so Marie earned her skimpy living through priv­ate tutoring and working in a laboratory.

Her sister Bronya was studying medicine in Paris where some universities already admitted women. In Sep 1891 Marie moved in with Bronya and when classes began at the Sorbonne in 1891, Marie en­rolled as a Physics & Math­em­at­ic­al Sciences student. By 1894 she was looking for a lab­orat­ory where she could work on her research project, the meas­urement of the magnetic prop­erties of various steel alloys. She visited Pierre Curie at the School of Physics & Chemistry at Paris University in 1894, and they married a year later.

Research didn’t pay much, so the Curies had to do a lot of teaching to earn a living. In 1897 the couple's first daughter (Irène) was born and it was then that the Curies were building on the work of the German physicist Wilhelm Roentgen. In particular they were examining the mysterious rad­iation from uran­ium discovered the year earlier by Antoine Henri Becqu­erel (1852–1908).

Pierre invented instruments that could measure radiation. With these the Curies demonstrated that, no matter the form of uranium, it continued to radiate with an intensity prop­or­tional to the amount of uranium in the sample. Marie developed methods for the separation of radium from rad­io­act­ive residues in enough quantities to allow for the careful study of its therap­eutic properties.

From their laboratory, two successive papers reached the Academy of Sciences. In July 1898, they announced the discovery of a new rad­ioactive element which the Curies named polonium after Marie's native country. The second paper, announcing the discovery of radium, was read at the Dec meeting. In 1898-1902 the Curies converted several tons of pitch­blende, locating precious centigrams of radium. 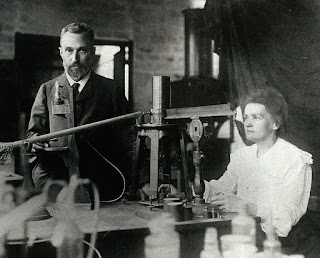 The Curies in their laboratory, c1904
Serious Science

They also published 32 scientific papers, one announcing that diseased, tumour-forming cells were destroyed faster than healthy cells when ex­posed to radium!!  While their early medical work did contain mis­takes, radiation really could shrink tumours, while app­lied dir­ect­ly slivers of radium could do the same. These techniques, in refined form, were the basis of Curie's career in therapeutic radiology and were closely related to mine in diagnostic radiology.

In Nov 1903 the Royal Society of London gave the Curies its highest awards, the Davy Medal. A month later the Nobel Foundation in Stockholm announ­ce­d that three French scientists, AH Becqu­erel and the Curies, were the joint recipients of the Nobel Prize in Physics for 1903. In 1904 Pierre travelled to Stockholm where he del­iv­ered their Nobel Prize lecture. In Dec 1904, their daughter Ève was born, just as Mme Curie gained her Doctor of Science degree.

The family team ended tragically in Apr 1906 when Pierre was hit by a heavy carriage and killed. The widow was soon asked to take over her late husband's post as Head of the Physics Laboratory at the Sorbonne. Honours pour­ed in from scientific societies all over the world for the young widow and her gigantic task of radioactivity research. In 1908 Dr Curie edited the collect­ed works of her late husband, and in 1910 she published her massive Traité de radioactivité.

After 5 years as an isolated widow, Marie Curie’s relationship with her husband's former student, Paul Langevin, became public. Curie was derided in the press for breaking up Langevin's marriage. Although it nearly prevented her receiving her second Nobel Prize, Curie’s scientific work continued at the top level.

Dr Curie had been the first woman to be granted her 1st Nobel Prize in 1903 in physics, and later became the first person to earn a second one. She re­ceived her 2nd Nobel Prize in 1911, this time in chemistry, for the discovery of radium and polonium and the isolation of radium. She provided science with a method for isolating and purifying radioactive isotopes. Marie became Director of the Curie Laboratory in the Radium Institute of the University of Paris, a giant laboratory founded by Paris Uni and Institut Pasteur before the war. 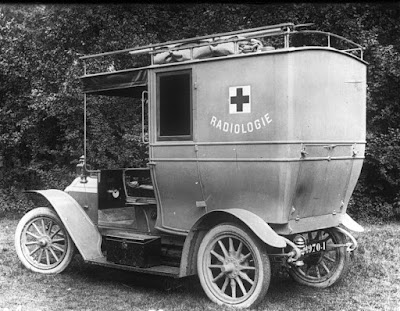 Disturbed at the quality of medical care for soldiers, Dr Curie in­vent­ed and resourced a brilliant fleet of radiology cars to carry X-ray tech­nol­ogy to wounded soldiers on WW1’s front line. The machines diagnosed injuries by X-raying wounded soldiers for bullets, shrapnel and fractures. After the war, she wrote and published her book La Rad­iologie et la guerre. In it she gave details of the scientific and human exper­iences gained for rad­iology during the war.

An imp­ort­ant visitor to the Radium Institute was Mrs William Marie Mel­on­ey, editor of a New York magazine and a Curie-fan. Mel­oney organised a nationwide sub­scription in America that produced money needed to purch­ase a gram of radium. Dr Curie was invited to the USA with her daught­ers, to collect the precious gift. In the White House, Pres Warren Harding (1865–1923) made a presentation. On her second trip in 1929, Pres­ H Hoover presented her with the money donat­ed by Americans, to buy radium for her laboratories.

In 1926 Marie’s daughter Irène married Frédéric Joliot, the most gifted assistant at the Radium Institute. In 1937 as a Collège de France professor, Frédéric studied chain reactions and controlled nuclear fission to generate energy. Irene and Frederick were awarded the 1935 Nobel Prize in Chemistry for the discovery of artificial radioactivity.

Today scient­ists, working in cancer treatment, archaeology and astro­physics, continue to build on her radiation work. Dr Curie worked into old age, completing her last book Radio-activité in 1934. She died in 1934 from aplastic anaemia, due to overexposure to radiation. Even sadder, her brilliant daughter Irene died from radiation leukemia in 1956.

Just as well Pierre was less sexist than the Nobel Academy in Stockholm. He was keen to work with a sharp female scientist, one as clever as he was.

When Pierre was nominated to receive the Nobel Prize alone, he refused to accept it until the Nobel Committee added her name as an equal recipient. The Nobel Prize had never been given to a woman in the couple of years before Marie Curie and it nearly wasn't awarded to her either.

Hello Hels and Dr. Joe, I too am a great admirer of Marie Curie. In addition to her immense contributions to science and medicine, she also has the distinction of adding to the language the useful and now basic metaphor of searching through a ton of pitchblende.
--Jim

nod and another thing. Einstein’s revolutionary theory was ignored as "rubbish Jewish science", while Marie Curie was accused of being a "so-called scientist who took her late husband's findings". Both these Outsiders found inspiration in their meetings and correspondence.

How often is it that when we hear about great lives there so regularly seems to be tragedy or great obstacles in those lives. Perhaps the resistance to these barriers is what helps them to overcome and raise above them to see further.
CLICK HERE for Bazza’s almost abhorrent Blog ‘To Discover Ice’

Good question! Part of the story is often surviving great obstacles that make the sufferer stronger, agreed. But so often great obstacles defeat people who weren't mainstream in the first place. These outsiders might have been people of the wrong gender, the wrong religion, the wrong colour or even the physically handicapped.

So Janis Joplin, Amy Winehouse, Rosalind Franklin, Ada Lovelace and Vincent van Gogh were geniuses who died between 27-37 years of age. Stephen Hawkings, Nikola Tesla and Albert Einstein were equally geniuses who survived and worked until their 70s and 80s!

The radiological car was a stroke of Curie genius. The x-ray machine and the photographic darkroom equipment could drive to the front lines where army surgeons could work on the wounded soldiers as soon as possible.

Power came from another added machine, an electrical generator.

H Hels - thanks for this ... the Curies were amazing - and so I've been grateful to learn more. Quite extraordinary ... and so many other inventions were able to come out of their findings ... as Joseph mentions amongst others - thank you - Hilary

Marie Curie made a huge contribution to the health and survival rate of soldiers in WW1. But she was also brave... how many other middle aged scholars would drive towards the war front to help their nation?

we assume that humanity always knew what it knows now. Even though the Curies, Roentgen and Becqu­erel were only working in the 1890s (my grandfather might have even remembered them), their science has been lost in the mist of history.

I think university students should do at least one unit on the History of Science.

Thanks for this . What a brain aandd whaat courage . Its a miracle she lived as long as she didi . The picture of her stashing radium into her luggage fro transport to Europe is aa bit mind bending !!

I wonder when scientists understood the toxic quality of radium. Physics Today wrote that by the late 1920s major radiological societies in Europe and the US were growing concerned about the effects of radiation exposures. In 1929, alarmed by the MANY deaths among laboratory and industrial workers who handled radioactive materials, the societies joined forces to establish a Radium Protection Committee.

In fact in collaboration with the French National Academy of Medicine, Marie Curie had pushed for the use of lead screens and periodic blood tests for those working in the radium industry. Was it too late to save her own life?