History of New Orleans after 1699

Frenchman Robert de la Salle sailed down the Miss­iss­ippi River in 1682, explored the area and claimed it for the French Mississippi Company. In 1699, a French-Canadian explorer Pierre le Moyne sailed in from the Carib­bean and landed locally.

By the time of King Louis XIV’s death in 1715, the vast Louisiana ter­r­itory was populated by 40,000 Native Americans and fewer than 400 new settlers. The French state was bank­rupt, with debts so high after decades of war that taxation income barely covered the interest on the debt. The new regent, Duc d’Orléans, needed a radical solution to resolve the crisis.

He turned to Scotsman John Law (1671–1729), who’d been sentenced to death in London for murder. He escaped and fled Britain in 1694, accruing a fortune gambling in Europe. Gaining control of the Mississippi Co. in 1717, John Law started selling concessions of land and slaves in Louisiana to investors. He recruited French labourers with promises of a fertile Eden, populated by cooperative Indians. Groups of Mississippi “officers” roamed Paris and the port cities, signing unemployed young men into labour indent­ures.

At first Law’s company was very successful; c7,000 French colonists and 1,900 enslaved Africans arrived by 1720. Less successful were attempts to feed and fit them out. People without seeds, livestock, tools or guns were unable to find food or shelter in swampy, diseased land. 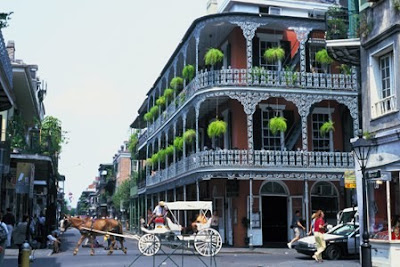 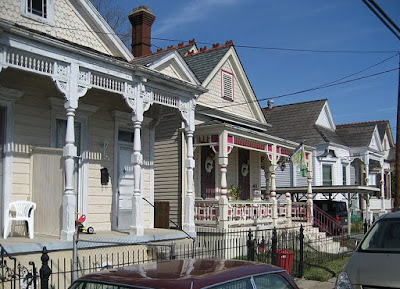 Law’s private Banque Générale was run on the theory that a lack of currency was stifling dev­elopement; instead the currency should be a method of exchange, unlinked to gold or silver. He proposed an ambitious scheme to the desperate regent: to consolidate the French government’s debt into one bank where all previous debt holders became share holders. Then he’d issue large numbers of banknotes to stim­ul­ate exchange in the economy, investing in colonial trade as a giant tobacco plantation!

Share prices rose steadily as Law acquired holdings of French government debt and colonial ventures in Sept 1719. Shares were selling at 20 times their face value and hyper-inflation began to grip the economy, with food prices quickly rising. Despite being appointed Finance Minister in Jan 1720, Law watched while alarmed shareholders began cash­ing in their bank notes. This generated a run on the bank, which quickly ran out of gold and silver reserves. The French economy collapsed and thousands were left destitute. In Dec 1720 Law fled France to save his life.

Louisiana’s new governor, Montrealer Jean-Baptiste Le Moyne Sieur de Bienville was asked to find the site for a new colonial capital in 1717, choosing the left bank of the Mississippi, navig­able for sea-going vessels. In 1723 he transferred French Louis­iana’s capital from Biloxi to New Orleans! Levees were built which spread out as the city and the plantations of the area grew. Al­as a hurricane destroyed most of the new city, to be rebuilt later.

NB Law had attempted to fulfil his promises to investors that he would have the colony settled with 6,000 settlers and 3,000 slaves. The biggest problem was the shortage of women, education and medical care in New Orleans. So the governor coaxed the Sisters of Ursuline to come from France. The Ursulines arrived in 1727, caring for orphans, running a school and a free hospital, and creating a home for the young middle class girls who wanted husbands.

The St. Louis Cathedral, dedicated to St Louis IX King of France, is the mother church of the Catholic Archdiocese. Selected in 1721 by a French engineer, the original building stood on the site for six decades before it burned in the totally destructive Great Fire in 1788. The Cathedral was rebuilt a decade later.

New Orleans was under Spanish rule from 1762. The first Cabildo was built in 1769 so that the Spanish colonial government could hold its meetings. Obliterated in the Great Fire of 1788, it was soon rebuilt in the original French style. Designed by Gilb­er­to Guille­mard, who also redesigned the neighbouring St Louis Cathed­ral post-fire, the Cabildo was the site of the Louisiana Purchase tran­­s­fer.

Rather than becoming a vast and prosperous French-speaking plantation, Louisiana’s economy, migration and investment had slowed right down. As part of a treaty at the end of the Seven Years War (1756–63) in Europe, France had to give up its holdings in North America, including New Orleans and Louisiana. France transferred the ownership of Louisiana to Spain and for the next 40 years, New Orleans was a Spanish city, trading heavily with Cuba and Mexico. 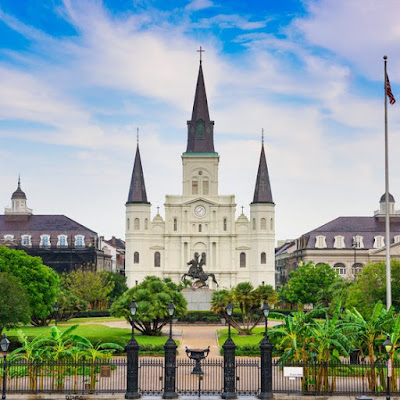 St. Louis Catholic Cathedral
The original building was started in 1721 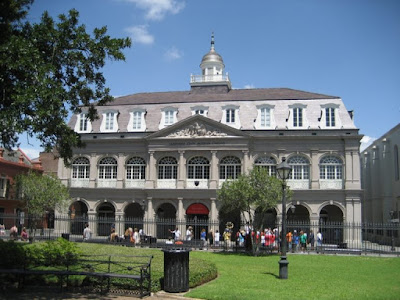 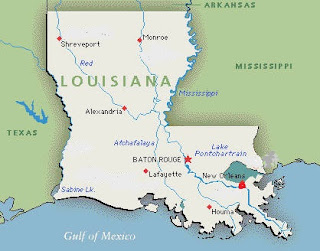 The colonists were under the control of the unpopular Governor Don Antonio de Ulloa. In 1768, 600 New Orleans citizens mounted the first revolutionary expedition of Americans against a European gov­ernment. They were made up of French-speaking Acadians from Canada who believed the Spanish were going to default on money owed to John Law’s company. Antonio fled to Cuba.

King Carlos of Spain sent a 2,600 man mercenary force to New Orleans to re-take the city. Don Alexander O’Reilly, an Irishman in the service of King Carlos, served as the governor of colonial Louisiana from 1769 on.

The failure to recruit a large white colonial population meant the racial system of oppression in Louisiana differed significantly from that in the other European colonies. The enslaved popul­at­ion remained stable and was able to build strong community ties where greater freedom could be exercised in the form of gatherings, music and dancing. While enslavement remained brutal, the cult­ure of Louisiana’s slaves remained far more Africanised than elsewhere. In fact the survival of the colony was reliant on its 3,600 enslaved Africans, whose skills and experience in cultivation were responsible for the first successful crops.

The most surprising change occurred in 1803 when Louisiana reverted to the French who sold it to the USA 20 days later in the Louisiana Purchase. By 1804, the city belonged to America. Thanks to vigorous bargaining by President Thomas Jefferson, the 600 million acres of the Louisiana Territory came to the USA for $15 million! Nice deal. 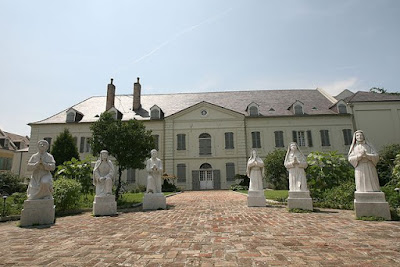 In 1810, with its mixture of French- and Spanish-speaking Creoles, Anglo-Americans and people of colour, New Orleans became the largest city in the South. Spanish administrators enforced strict building codes, requiring brick construction to avoid fire. Spanish influence came indirectly with the form of Creole style, which mixed French and Spanish architecture, with some elements from the Caribbean.

Louisiana became the 18th state in Apr 1812, and a month later, Congress declared war on Britain. By 1814, rumours abounded that the British were going to attack. Then Gen Andrew Jackson arr­ived, quickly organised a defence of the city and imposed martial law. The final battle of the War of 1812 was fought in defence of New Orleans; Col Andrew Jackson led a coalit­ion of skilled and unskilled militia men, Indians, Creoles, free men of colour and pirates to defeat the British. In Dec 1814 Jackson attacked the British troops who were camped along the Mississippi. The battles raged and finally Jackson’s army prevailed.

Then news reached the city that the British had signed a peace treaty at Ghent on Christmas Eve, two weeks before the Battle of New Orleans 1815. New Orleans became the USA’s wealthiest and third-largest city. The city’s thriving port began bringing long river boats loaded with goods down the Mississippi, shipping the produce of the nation’s interior to the Caribbean, South America and Europe. Thousands of slaves were sold in its markets.

Creoles had been people born in Louisiana, of French descent and later of Spanish descent. New Orleans citizens adopted the term Creole for themselves to distinguish themselves from the influx of Americans whom they disliked. [Not Cajuns, who were a French-speaking people but coming to Louisiana via Canada and living in rural areas]. The urban and sophisticated Creoles had a refined style of European living, and their special taste created their famous Louisiana cuisine. Creoles loved the opera, masked balls and café life. The city is still known for its distinct Creole culture and vibrant history.

Hello Hels, New Orleans has gone through so many periods, all full of interest. Southern writer Harnett Kane wrote a book called Queen New Orleans, which I have in Taiwan. Many other writers feature the city, especially Mark Twain in Life of the Mississippi. While the social, political, and natural aspects of the city are absorbing, I admit that I am most taken with its architecture.
--Jim

so interesting. i did not know of the spanish rule or the war against the british in 1814. it must be an amazing city.

The Ursuline Convent must have been beautiful, because they now say it is the nicest surviving French colonial public architecture in the country. Perhaps not gorgeous now, but how much French colonial sites are there left.

the only book I remember focusing on New Orleans was A Confederacy of Dunces by John Kennedy Toole (1980). But in those days I wasn't remotely familiar with any part of the USA that wasn't on the west or east coasts.

I have focused on European and British Empire history for so long, I have to very carefully analyse any connections with the entire rest of the world. I was very familiar, for example, with the Catholic French Canadians whom the British ran out of Nova Scotia and the Maritimes. These poor Cajun sods jumped into ships and looked for landing places in the USA but they were not allowed to land until they reached Louisiana. The Cajuns today value their own French history and culture.

you are correct. I will add a photo of the Ursuline Convent, but I cannot fit in all the details of the impressive gardens and the attached buildings (eg the day school and the chaplain's house).

It was amazing. Thank you for your blog.

Thank you. What did you like most about New Orleans?

I have travelled extensively in North America and I think New Orleans stood out as being very different from anywhere else. Very European. The first thing I learned was about the different architecture. The French and Spanish had different styles of wrought iron verandas although the French Quarter is mainly Spanish! I haven't been since the floods.
CLICK HERE for Bazza’s defiantly dapper Blog ‘To Discover Ice’

all over the world _colonial control_ meant individual countries and cities woke up each morning and were told which king they would now obey and which army they would fight in. It must have been appalling. But at least New Orleans and Quebec maintained _cultural control_ - religion, architecture, cuisine, language etc.

Imagine being a Uyghur in the Xinjiang Uyghur Autonomous Region in China :(

I can read and write three languages, but alas Arabic isn't one of them. Alas my translation icon gave text that wasn't even vaguely related to New Orleans.