WW1 hospitals were tough, partially because the conditions in which the medical staff had to tend to the terrible injuries were too crowded and poorly equipped.


But necessity was the mother of invention; the wounds inflicted on millions of soldiers drove the search for new medical tech­niqu­es. Technological innovations had a massive impact on survival rates. The Thomas splint, for example, secured a broken leg. In 1914, 80% of all soldiers with a broken femur died. By 1916, 80% of such soldiers survived.

The British Army began the routine use of blood transfusion in treating wounded soldiers, where blood was transferred directly from one person to another. That was until a US Army Dr Captain Robertson realised the need to stockpile blood; he established the first blood bank on the Western Front in 1917, using sodium citrate to prevent coagulation. Blood was kept on ice for up to 28 days and then transported to casualty clearing stat­ions for use in life-saving surgery.

But professional hospitals were needed. In Aug 1914 two women, Dr Flora Murray and Dr Louisa Garrett And­erson, founded the Women's Hospital Corps/WHC whose medical staff was entirely composed of graduates from the London School of Medicine for Women. Because the women anticipated a demeaning reaction from the War Off­ice, Drs Murray and Garrett Anderson applied to the more liberal French Red Cross. The French did allocate the newly built Hotel Claridge in Paris for the women to use as a military hospital! It opened in Sept 1914. 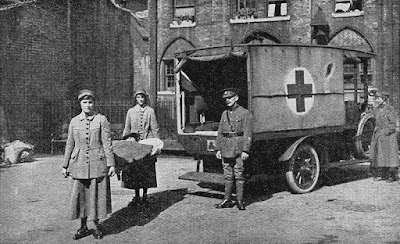 The Red Cross brought wounded soldiers on stretchers
and the hospital staff took them in via external lifts. 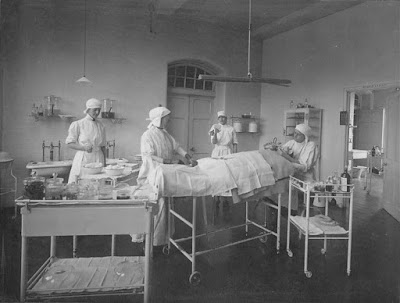 British teaching hospitals had refused to appoint women to training posts. Yet despite their limited surgical experience, the hospital was successful; French and British authorities' scepticism reduced. Britain’s Royal Army Medical Corps­-RAMC began to treat the hospital as if it were an auxiliary to the British Army, rather than to the French Army.


Then the two doctors were asked to open another hospital at Wimereux, near Boulogne. The Women's Hospital Corps ran both hospitals successfully.

In Jan 1915, a change of policy meant British casualties were evacuated back to the UK, rather than remaining in France. Drs Murray and Garrett Anderson offered the services of the WHC to the British Army. Fortunately the War Office had received favour­able reports of the Corps' achievements. So the two women were per­sonally invited by the Army Medical Servic­es’ director to run a large military hospital in central London, under RAMC auspices. The WHC closed down its two  hospitals in France and returned home.

The Endell St Military Hospital in Covent Gardens opened in May 1915 in the form­er St Giles workhouse, previously used by the Met­rop­olitan Asylums Board to house destitute enemy aliens and Cont­inental refugees. The hospital blocks were 5 storeys high, linked by a glass-covered passageway. Part of the workhouse was C18th, but the children's home behind the main buildings was modern.

To prepare the buildings for use as a hospital, extensive struct­ural alterations were needed. External lifts capable of carrying stretchers, electric lighting, ward kitchens and bathrooms were ins­talled on each floor, and operating theatres, X-ray rooms, laborat­ories, dispensaries, mortuary and storerooms were created. The Hospital had 520 beds.

Established to treat only male patients, it was almost entirely staffed by women - 15 doctors, including visiting specialists. Dr Murray was the Doctor-in-Charge, while Dr Garrett Anderson was the Chief Surgeon. The nursing staff comprised a Matron lent by the New Hospital for Women, Assistant Matron, 28 Sisters and 60 female nursing ord­erlies. The sisters' uniform was of a blue-grey washable material with scarlet shoulder straps and the orderlies wore white.

The RAMC was convinced that the Hospital would soon close. But be­cause of its proximity to major railway termini, casualties poured in via ambulance trains. 30-80 casualties would be received daily, often late at night. Soon the number of beds had to be increased to 573.

Officially an Army hospital, new military admissions were operated on immediately; surgeons sometimes performed 20+ operat­ions a day! Many patients needed major abdom­in­al surgery, some with head injuries required craniotomy and a great proportion were orthopaedic cases with compound fractures of long bones. As the war progressed, specialist units were estab­lish­ed by the War Office, and patients with head injuries or femoral fract­ures were diverted to the specialist units. However, a large number of amputees were still admitted to the Endell St Hospital.

The 17 wards were wide and bright for up to 40 beds each, with windows on either side. The walls had colour, and the bedcovers could be warm, striped Army blankets. Additional luxuries eg reading lamps provided more comfort. The wards were also decorated with flowers, replaced daily by volunteers, who also brightened the courtyard with displays of flowers in window boxes. The women had created a soft, home-like atmosphere.

While most military hospitals had volunteers who ar­ranged books, games and ent­er­tainments for their patients, many professionals in central London prov­ided free entertainment on this hosp­it­al’s stage. Sports days, the library and needlework classes were popular. In Jan 1917 Queen Alexandra visited. 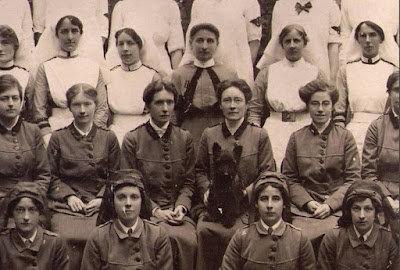 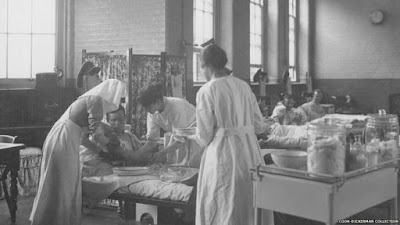 The Hospital was a great success. In fact in Aug 1917 another new section was opened, with 60 beds set aside for women. And the timing was perfect. In 1918 new legislation gave the vote to women over 30. The Hospital staff celebrated this event by raising the Women's Social and Political Union flag in the Hospital courtyard.

Orig­in­ally intended as a temporary measure, the section for female patients finally closed in Jan 1919, by which time c2,000 women had been admitted for surgical or medical treatment. In December 1919,  the remaining parts of the hospital closed and later demolished.

Those pioneering woman deserve this recognition Hels! Louisa Garrett Anderson was, of course, the daughter of the more-famous Elizabeth who was the first female doctor to qualify in England and who also founded a women's hospital in London.
Incidentally I know the lovely little seaside town of Wimereux quite well and I'm going there for a long-weekend next year!
CLICK HERE for Bazza’s puminative Blog ‘To Discover Ice’

These women could run three hospitals, do life saving surgery and help young men live normal lives post-war, yet could not vote. Shame!

A brief and honourable institution. To spend all that money establishing and equipping the hospital seems so wasteful when it stopped being used in 1919. Without wisdom of history, it was rather stupid to think that women could not do certain things with any competence.

Thank you for inviting me to read your blog articles. The first woman doctor in Britain, Elizabeth Garrett, married James Anderson and had her children while continuing to work as a doctor. She must have been an awe inspiring mum. The eldest child Louisa also studied medicine at the London School of Medicine for Women. Go sisters! They were brave women!

Thank you. My beloved (and blog partner) reads every journal of medical history published in English, for which I am very grateful. But his articles are stronger on medicine than on history. Thus I had to go and locate Eliabeth myself.

Not only did it take Britain decades longer than New Zealand and Australia to give women the vote. In 1918 the Brits reluctantly and finally thanked older women for their sacrifices in World War One i.e only women over 30!

Younger women had to wait until 1928!

Why did the hospital close in 1919, when so many injured men were still struggling to return to mental and physical health? And why destroy an essential service like a hospital, instead of expanding and modernising it?

Dudley Court is on the site today, complete with a grey plaque memorialising the old hospital.

Very brave! The first place for women to study medicine in Britain was the London School of Medicine for Women, opened in 1874. And the London Free Hospital allowed women to do their clinical work from 1877. Even so, I don't suppose the male staff and students made the women feel warmly encouraged back then.

Hello Hels, It is funny how often in history women have proven themselves to be smart, capable, brave, patriotic, etc., yet after they have made some major contribution, they were forced back into secondary roles. Let's hope those bad old days are gone for good, and all people are accepted for the talents they possess and exercise.
--Jim

I was writing a post on Avery Brundage, and found the following documents that he wrote relatively recently about top class women athletes.

In 1949, as IOC vice president: “I think it is quite well known that I am lukewarm on most of the Olympic events for women for a number of reasons which I will not bother to expound because I probably will be outvoted anyway. I think women’s events should be confined to those appropriate for women: swimming, tennis, figure skating and fencing.”

In 1957 in a letter to members of the IOC Brundage wrote, “Many still believe that events for women should be eliminated from the Games, but this group is now a minority. There is still, however, a well grounded protest against events which are not truly feminine, like putting a shot, or those too strenuous for most of the opposite sex, such as distance runs.”

The General Session minutes from the April 1953 meeting in Mexico City read that “women not to be excluded from the Games, but only participation in suitable sports.” Oh dear :(

WOW! This is WWI history that I had not heard of before, fascinating. The two women were amazing deserving to be recognised for their place in history.

In the first Honours List for the new Order of the British Empire in 1917, Drs Murray and Anderson were awarded the CBE, and over the next few years four more of the Endell Street doctors were awarded an honour. They were very visible and significant women back then.

So how come we have barely ever heard of them today?

"Renewal: Life After The First World War In Photographs" is an exhibition consisting of 130+ black and white photographs, documents and objects sourced from the IWM's collection. Note the innovations in medicine and plastic surgery, including patients being taught how to use their new artificial limbs.

those photos are amazingly preserved reminders of the post-1918 era. I hope at least my British readers will see the exhibition.

I would say the images reveal the strength and perseverance of people during times of unrivalled social and political change, but also the pain.