Avery Brundage (1887-1975) grad­uated civil engineering from the University of Ill­in­ois in 1909. His links to anti-Semitism were first seen in his university days, where he was pres­id­ent of a fraternity chapter who would accept any Aryan male who did not have a Jewish parent.

Brundage was a fine athlete who won the American National dec­athlon three times. He competed in the 1912 Summer Olymp­ics in Stockholm, where he represented the USA in both pentath­l­on and decathlon, but did not win any medals.

He began to involve himself in sports administration, event­ually at the American Olympic Committee level. In 1928, Brundage was elected AOC president.

Many sports administrators disliked women’s involvement at the top level. So the anti-woman movement was not pleased when, in July 1932, American athlete Babe Didrikson did brilliantly to win two Olympic gold medals in javelin and 80m hurdles. Didrikson was charged with “professionalism” because she had appeared in an advertisement for milk. This was enough for Brundage to vigorously advocate suspension, and thus the poor woman was suspended by the Amateur Athletic Union. 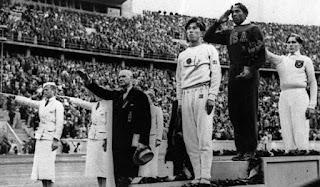 Meanwhile, in 1931, Berlin was awarded the right to host the 1936 Olympics, signalling the country’s return to the glob­al stage after years as an international outsider since WWI.

But soon after Hitler took power in 1933, international pro­tests focused on Germany’s official anti-Semitic policies. Countries feared that the German organisers would prohibit Jewish athletes from participating in the Olympic Games.

In 1934 the AOC president Avery Brundage visited Berlin where his frat­er­nisation with the Nazis was infamous. After a brief, tightly managed inspection of German sports facilities in 1934, Brundage stated publicly that Jewish athletes were being treated fairly and that the Games should continue, as planned. In fact as the Olympics controversy heated up in 1935, Brundage alleged the existence of a Jewish-Communist conspiracy to exclude the USA! But the pro-boycott side said that Brundage was already an anti-Semite who, on his trip to Berlin, took no notice of the oppression of Jew­s.

Avery Brundage was arguing that politics had no place in sport; that the Olympic Games belong to the athletes and not to the polit­icians. He wrote in the AOC's pamphlet Fair Play for American Ath­letes that American athletes should not be­come involved in the Jewish issue. As the Olym­pics controversy heated up in 1935, Brundage alleged the existence of a "Jewish-Communist conspiracy" to keep the USA out of the Games. Jewish community groups in the USA, he said, planned a militant campaign to prevent athletic organisations from permitting their athletes to participate.

Why didn’t all the other countries simply disregard Brundage and go ahead with their own boycott? Because other than the home nation, Germany, the USA had the biggest and most influential selection of athletes. Once the USA voted to participate in Dec 1935, 49 other countries fell in line. 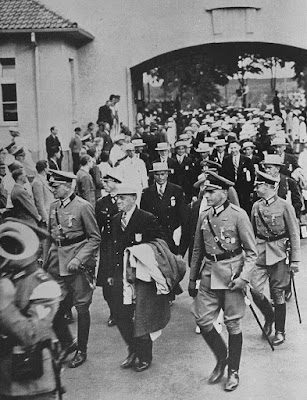 Avery Brundage and the American athletes passed through the gate into the Olympic Village for the 1936 Games. The German military officers welcomed the group.

In what people saw as an anti-woman move, Avery threw swimmer El­eanor Holm off the 1936 American Olympic team in mid-ocean, app­ar­ently for sipping champagne. Brundage said that it was the Olympic Committee threw her off; there were 20 men on the comm­it­tee and they voted unanimously to do it. He was the chairman of the committee, and it was his duty to announce the decision, which he made clear he approved of 100%.

But even worse was to come. The brilliant black athlete Jesse Owens won four gold medals for the USA, foiling Hitler’s intended demons­t­ration of Aryan supremacy. Yet Brundage ruthlessly declared the im­poverished Jesse Owens a professional and suspended Owens from the AAU. This act barred Owens from competing in any sanctioned sporting events in the USA forever.

The two best American relay runners (Stoller & Glickman) in Berlin happened to be Jewish but were excluded from the race at the last moment. Stoller laid the blame with the American Athletics chief Brundage, who he believed bowed to pressure from Hitler to drop the two Jewish runners.

Two years after Brundage played such a key role in preventing an American boycott of the Berlin games, his construction company was awarded the building contract for the German Embassy in the USA, in grateful thanks. 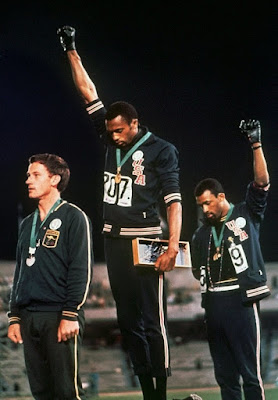 American Tommie Smith won gold and his teammate John Carlos, who won bronze in the 200-meter race, in 1968. Australian silver medalist Peter Norman is at left.

In 1949, International Olympic Committee vice president Brundage returned to his anti-woman commitment. “I think it is quite well known that I am lukewarm on most of the Olympic events for women ... I think women’s events should be confined to those appropriate for women: swimming, tennis, figure skating and fencing.”

In 1952 Brundage became president of the IOC, a hugely powerful organisation. Yet only one year later he was arguing for the elimination of women from all Olympic competition, or from those sports that looked butch. His letter to IOC members that year said: “Many still believe that events for women should be eliminated from the Games, but this group is now a minority. But there is still a well-grounded protest against events which are not truly feminine, like putting a shot, or those too strenuous for most of the opposite sex, such as distance runs.”

From the biography of the Australian athlete Peter Norman (which I’ll review in 2019), Brundage clearly reacted with anger to brilliant black athletes, John Carlos & Tommie Smith. These gold and bronze medal winners both rais­ed their fists at the Mexico City Olympics in 1968, in solidarity with other oppressed black athletes in the USA. Brund­age and the IOC ordered the suspension of Carlos and Smith, and threatened publicly to strip them of their medals.

The lack of equality for black athletes remained an issue for the IOC. The committee extracted rock-solid promises of an integrated South African team, before it rein­stated that nation for the 1968 games. However South Africa’s apartheid policy at home remained unchanged, prompting African nations and others to boycott the 1968 games. None­the­less Brundage continued to support South Africa.

In the 1972 Olympic Games in Munich, Brundage horrified the IOC. Only a short time after the 11 Jewish ath­letes in the Israeli team and 6 others were massacred by Palest­in­ian terr­or­ists, Brundage ordered that the Games must go on. He drew parallels between the Israeli murders and an IOC decision to bar Rhodesia from Munich. Despite Rhodesia’s racist policies, Brundage supported Rhodesia’s inclusion in the Games and took the IOC’s ruling as a personal attack. People were stunned by Brundage’s cruelty.

Brundage retired as IOC president after the 1972 Olympic Games.

Since Australia is one of the only countries that has never missed a summer Olympic Games, we must have been in Berlin in 1936. But I wonder if there was a boycott debate here.. who made the decision that we should go to Germany?

I cannot find any mention of a boycott debate in this country. Shame on us :(

The Australian Olympic Committee wrote: "In many countries the main controversy in the lead up to the Berlin Olympics was the internal political policies of the Nazi government and its persecution of German Jews and other political rivals. This debate for a boycott was strongest in the United States. In Australia the dominant issue was to do with the team selection. Australia was only sending 33 competitors.

There was much argument here too, but it had nothing to do with the philosophies of Olympism, or the collision of sport and politics. As had happened before, it was mainly about the selection of an Olympic team, and it was soured by the presence of traditional Sydney—Melbourne rivalries. Compared with the controversy raging abroad, the whole affair was petty and unedifying.

Hello Hels, What a horrible person was Avery Brundage. I have stopped wondering how people like this end up in top positions--haters reinforce each other, and there are too many people willing to gang up on a common-but-innocent "enemy". They must have pretty deep inferiority complexes to quash their supposed rivals in what is not even usually a competition (e.g., Owens perhaps humiliated Germany, but certainly supported the United States). What disturbs me most is the current resurgence of slobs like Brundage.
--Jim

And another example. Juan Antonio Samaranch was an important minister in the dictator Franco's Spain, a fascist who stayed loyal to Franco until the regime finally ended after Franco's death in 1975. Despite his Fascist views, Samaranch became president of the International Olympic Committee 1980 and stayed in that powerful position for decades.

How did it happen that racists and extremists gained power on the international stage?

thank you for your interest in the Olympic Games, but no advertising please.

What a nutter. He makes Jacques Rogge look like a marshmallow.

I suppose a person's political views are his own, as long as they don't influence his speech and behaviour outside his house. But once Brundage became vice president and then president of the International Olympic Committee, it was said he had more political power across the world than anyone except the Secretary-General of the United Nations.

Rogge couldn't even compete on awfulness!

Sadly, racism, xenophobia, and hatred of “the other” are all still with us. We never learn do we?

Agreed.. nothing has changed and I suspect that in some important ways the world is nastier today, now that we have right wing extremist, uber nationalist and racist national leaders.

But the Olympic Games were supposed to be inclusive and equalitarian. Thus pro-Nazi, pro-apartheid, anti-Semitic and anti-woman views in the International Olympic Committee were truly offensive.