Budapest was called the spa capital of the world.

It wasn’t until the Turkish occupation of Buda in the C16th that the ancient Roman springs were brought back to their former glory. In the Turkish era, three thermal baths were re-developed, connected to Pasha Sokollu. He led Buda for 12 years and wanted to make the city a stable military centre and a liveable Turkish city. These well-known springs were used for bathing, or for hospitals.

Massages and the use of different creams and oils were an essential part of Turkish baths, and eventually Hungarians were happy to enjoy the same treatments. But because only the Turks were allowed to use the baths in the day, Hungarians could visit only after hours.

I have selected just one baths complex. From 1868 it took 10 years for Vilmos Zsigmondy (1821-88), the Hungarian engineer who specialised in geo-thermal well drilling, to find the waters under the City Park! The hot spring water supply came from the artesian well which was drilled 970 ms deep. Thus the underground waters rich in minerals could flow spontaneously from the great pressure, like a fountain. 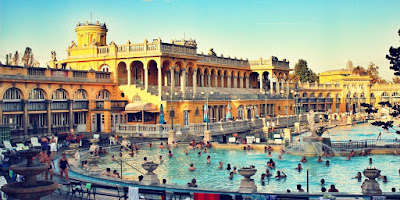 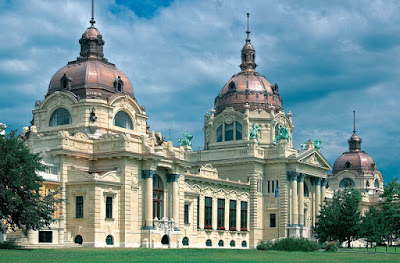 Once the deep hot spring wells were drilled under the Her­oes’ Square, Budapest became the spa capital of Eur­ope. The first late C19th baths were not spectac­ular, but were very popular. The old Artesian Baths’ stone walled facility was built in 1881, along with marble baths and pools.

Artesian Baths were the first hot spring bath palace in Pest and the largest, with 15 indoor pools and three large outdoor ones, were surrounded by yellow and white neo-baroque buildings. Inside the vaulted ceilings were mosaic tiles, statues and painted windows.

The bath building was so popular that by the late 1880s the city councillors wanted a bigger, better  facility. The palace of Szechenyi Bath was designed by Gyozo Czigler (1850-1905) . He presented his plans at the nat­ion­al exhibition in 1896, when Hungary celebrated its 1000th birthday and when the Hung­arian Millennium Monument on Heroes’ Square and Vajdahunyad Castle were built. This Professor from Budapest Tech­nical Univ­ersity had also designed Gozsdu Court and Hunyadi Square Market.

It took 7 years to get the designs officially accepted by the General Meeting. Alas Gyozo Czigler had died by the time the con­st­ruction began in May 1909. So the work was comp­leted by architects Ede Dvorak and Kalman Gerster. At the opening in 1913, the baths were already renamed now called the Szechenyi Baths, after the Count Istvan Szechenyi.

The 1913 version of Szechenyi Baths was con­sid­er­ably smaller than today’s version. The popularity of the baths was increasing year by year, providing both relaxation and medical benefits. While in 1913 200,000 people visited Szechenyi Bath, by 1919 890,000 bath guests used the pools. But despite the Thermal Baths’ huge suc­c­ess, the facility was not profitable. WWI presented a tough econ­om­ic situation in Europe and the planned Szechenyi Bath Spa Hotel didn’t happen.

In 1924 Budapest’s city council voted for the Bath’s expansion. The outdoor thermal baths and the long open air swimming pool were added and opened in 1927, based on the design of Imre Francsek. At that time the pools were surrounded by sand, bringing the beach into the city. Since 1985, however, the pool sides have been made of hard stone pavements.

From 1936-8 the new wells’ geo-thermal water came from the depth of 1256 ms. The hot spring waters, at 77c, were cooled with fresh cold water, to provide an ideal temperate in the thermal baths. By 1938 it was so successful that the mayor of Budapest recom­mended build­ing a fountain and a drinking well in Szechenyi Baths, to promote tourism. These buildings were added in 1939, as my Czech mother-in-law delightedly found on her regular visits to Budapest.

As Szechenyi Bath was originally planned for separate male and female pools, the structure of the building was symmetrical: men on the right side could use the same sort of pools and bath facilities as women could on the left side.

Changes happened. It was only in 1963 that Szechenyi Baths remained open for the winter season. And the Szechenyi Bath Hospital later opened, taking care of daily 178 patients. 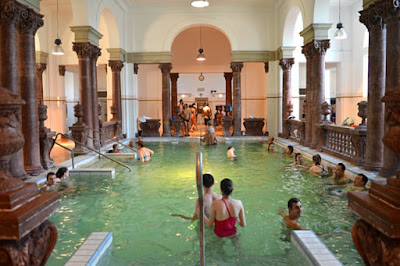 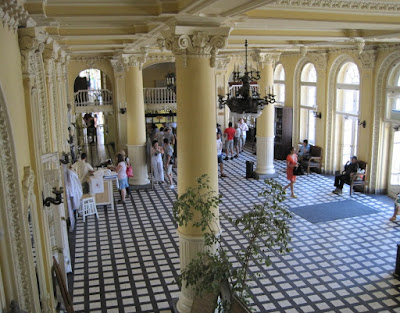 
Hungary became a member of the Warsaw Pact in 1955. During the Comm­unist era (which ended in 1991), the Szechenyi Baths were somewhat neglected. Thanks to the detailed restorations after the Soviets left, Szechenyi Bath has become beautiful again. The pools and thermal baths have been restored since 1997 and restoration work is still creating luxurious medicinal baths with modern treatments.

The hot spring waters of Szechenyi Baths used thermal waters that were channelled into the artificial lake in City Park. This lake was used as a boating lake in summer months, and a skating rink in winter months.

The architecture and decoration of the Szechenyi Thermal Bath palace reflected Neo-Baroque and Neo-Renaissance taste. There were many painted windows, statues related to water mythologies and water gods, fish, swans, shells, clams and mermaids. Statues of dolphins, detailed cupola and lamppost mosaics, reliefs on the walls and art deco metalwork shone. Tiles on the walls were made in the Zsolnay Majolica Tile Factory. The bust of Zsigmondy is in front of the baths.

In 2009 Szechenyi Bath gained a rooftop spa oasis called Palm House. It has exotic trees that love the heat of the thermal baths and the endless sunshine and light coming through the glass roof.

It is a pity we did not have time to visit the bath when in Budapest. Worse, I have never looked at them in any detail. I know a little more now.

Helen my old town is special! Not just Szechenyi. Gellert Thermal Baths and Spa says that the medicinal spring here was already famed in the 13th century. The Gellert Bath and Hotel itself opened its doors in 1918. Outdoor pools were added later on, and today it combines modern technical developments with rich historical heritage. The spa is decorated with a wealth of original Art Nouveau furnishings, artistic mosaics, stained glass windows and sculptures, although the interior of the hotel built alongside has lost many of these fittings over the years.

that is true, whichever country or city you visit. You only have a certain amount of time available and have to select which sites to visit and which ones to miss.

Although Budapest was not a place I knew well from lectures or in person, my mother in law told us many times that we HAD to see her favourite experiences from just before WW2.

Leah and I along with with our eldest daughter Ruth, and her partner Gary, visited Budapest this Spring. What a fabulous city! Architecture, food, transport and so inexpensive. We had no experience of those wonderful spas and baths but the buildings themselves are beautiful.
Also, us oldies travelled free on all transport systems!
CLICK HERE for Bazza’s effulgent Blog ‘To Discover Ice’

I was trying to find which baths were recommended in Budapest. Here is just one person's view:
The Szechenyi Baths in the City Park are mixed all week, while the Turkish Rudas Baths and the beautiful Gellert Baths are mixed at weekends. Budget travellers may find the recently refurbished Veli Bej Baths a great option, from the communist times. Lukacs Baths is probably the most visited by Hungarians, best for mingling with the locals.

tourists have a great time in Budapest with the architecture and food, as you say, and also the music, river cruises and parklands! My dream cruise would be the 15 night trip, starting in Amsterdam and finishing in Budapest.

Hello Hels, I had not known much about the baths in Budapest, let alone their extent and magnificence. There are many hot springs in Taiwan (including in and near Taipei City), which often form local attractions, but have never been built into monuments of civic achievement.

Do you recall the well-missed Hattatt blog, which emanated from Budapest? In their travels around the city, I do not recall Jane and Lance having discussed this distinctive feature of their home, although I many have missed a few posts.
--Jim

I can't remember the Hattatt blog dealing with spas and pools, but Wandering Carol does. What's more, she wrote about Danubius Health Spa Resort Margitsziget, right on scenic Margaret Island between Buda and Pest.

The outside of the building looks grand and the inside at pool level looks casual and fun filled.

YES! The turn of the century building designed to welcome visitors in really did look like a palace, didn't it? Neo-baroque architecture that must have cost a fortune! Inside had to be medicinal and fun filled, as you note. Pools and thermal sections were provided to attract both locals and tourists.