Anni Albers at the Tate: Bauhaus and American textile designer

Annelise Fleischmann (1899-1994) started studying at the Bauhaus School of Art and Design in 1922. Bauhaus was a newly opened educational institution in Germany, combatting the despair and unemployment that followed WWI with youthful energy and training. During her first year, Anni did the same preparatory course that all Bauhaus students did, under Georg Muche and Johannes Itten.

Director Walter Gropius, his staff and students worked to unify the fine arts and the applied arts. In the elective workshops at that time, men were taught whichever art form they chose, while women were largely directed to the craft disciplines. Anni was reluctant to go into weaving, but at least it brought her under the tutelage of the quality weaver Gunta Stölzl, assisted by theoretical lessons from artists Wassily Kandinsky and Paul Klee.

Here she met Josef Albers, head of Bauhaus’ glass studio. Fleischmann and Albers came from very different back­grounds. Albers was the son of a Catholic house painter, living in a coal-producing town in Germany’s industrial northwest. Fleisch­mann came from two cultivated Jewish families. Her father was a prosperous business­man who manufactured furnit­ure sold in classy Berlin showrooms. Her maternal grand­father, Leopold Ullstein, had been the founder of what was the largest pub­lishing company in Germany and my all-time favourite Jewish pub­lish­er. Leopold’s sons operated the business, em­pl­oying thousands of workers and managing an enormous printing empire. 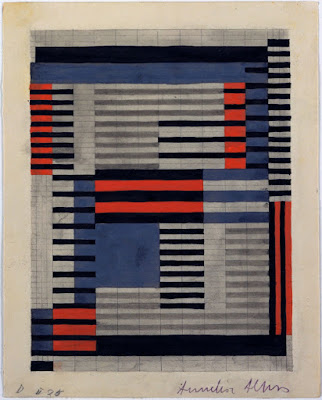 In 1930 Anni graduated from Bauhaus and presented a work that was installed in the auditorium of the ADGB Trade Union School in Bern­au. It was a textile that combined transparent cellophane and a velvety chenille, in order to reflect light and simultaneously absorb sound. Throughout her career, she was excited to design textiles while analysing how materials respond to heat and cold, light, air flow and architectural mat­er­ials. And to design abstract geometric patterning. Then she taught at Bauhaus.

In 1933, the Nazi Party came to power and Bauhaus Acad­emy was swiftly shut down by the regime. Although her family had already converted to Christianity in her youth, Anni and Josef got out of Germany as soon as their American visas arrived. Philip Johnson had helped them find teaching positions at Black Mountain Coll­ege in North Carolina. In the meantime, as soon as Hitler came to power, propaganda was directed against the publisher Ullstein Verlag. By 1934 the company was seized and Aryanised.

In the USA Anni Albers spent more time in academe and developed a knowledge base that led her to write two key books on weaving. 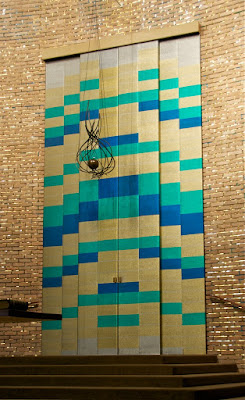 Dallas Synagogue, 1965
Albers' curtain in front of the ark.


Albers’ journey to Mexico in 1936 was a pivotal moment in her dev­elopment as an artist. Here, she visited the tombs at Monte Albán, where she was struck by the patterns of the ancient inscrip­tions. In the 1950s, Albers made several trips to Peru, where she collected textile fragments. 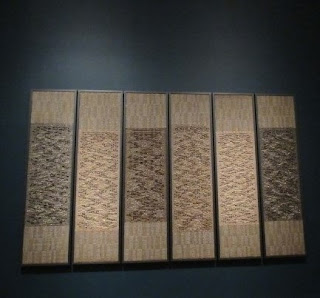 Albers, Six Prayers 1966,
commissioned by the Jewish Museum in New York
to memorialise the six million Jews who died in the Holocaust.

Gradually, she and Josef built up a collection of textiles and small-scale but energetic art objects. Anni thought of the intricate hand-woven patterns as a language; the threads were carriers of meaning. When she incorporated these studies into her modern hand-weaving the results were often very impressive.

Albers’ artistic legacy was entwined with Jewish institutions that commissioned her most monumental works, but she apparently never entered a synagogue, in Germany or in the USA. When the generation of her grandparents underwent a group conversion, they were probably demonstrating their assimilation and patriot­ism to Germany rather than religious persuasion. Anni was herself baptised and confirmed as a Lutheran back in her youth.

So what do we make of Anni's synagogue commissions? When American Jewish commun­it­ies were growing and spreading out in the post war era, synagogue boards often turned to émigré architects and artists with modernist training, advocates of functional design and geometric abstraction. Nonetheless Albers’ relationship to her old religious legacy must have felt strange to her.

The first major survey of Anni Albers in the UK will look at how the Bauhaus-trained artist was inspired by cultures to develop forms of weaving that transformed a domestic craft into an art form that expressed modernism. The exhibition called "Anni Albers" is now at the Tate Modern London, until the end of Jan. 2019; it is part of a world­wide commem­oration of the 100th anniversary of the Bauhaus. The Tate show brings together Albers’ work, from the Bauhaus years to her USA era. It showcases the looms she used and her seminal texts on design and weaving as well as her historical collection of textiles from around the world. Anni Albers was a pioneer both of weaving and modern design, as she experimented with architectural app­lications and materials.

I haven’t seen the exhibition so I am relying the Tablet's recommendations. Designed at Bauhaus Dessau in 1926, examine Black White Yellow, a work conceived as a simple geometric sequence with over­lapping strips of cotton and silk; this patterned textile created the imp­ression of stairs. Six Prayers, commissioned by New York’s Jewish Museum, is the most complex at the Tate. One can assume that its design developed out of the woven ark coverings Albers did for Temple Emanu-El in Dallas in 1957 and Temple B’nai Israel in Woon­socket, Rhode Island, in 1961. For Dallas she produced a machine-woven fabric panel, patterned with silver, gold, green and lapis lazuli in zigzagging bands. For Woonsocket she used a brocade-like technique, floating black, white and gold Lurex threads along the weft.

I recommend reading "Anni Albers weaves her magic at the Tate Modern" in Apollo.

Hello Hels, Albers' geometric designs are indeed handsome, while incorporating her vast store of symbolism. When considering how fragile they are, it is amazing how many ancient textiles with wonderful patterns still exist. The main sources seem to be ancient Egypt (including the Coptic period) and also South America.

Her temple hangings make me reflect that even in Cleveland and its suburbs are many temples (and of course other religious buildings) that were meant to be impressive modern structures when built. I wonder how many of them commissioned Albers-type artist-made textiles, and how many of these are still extant. My guess is that many masterpieces were discarded or lost as soon as they started to wear, which was not such a problem with wood and stone work, most of which was built in, anyway. Still, who knows what treasures may lie folded away in a box?
--Jim

Hel Albers textiles are lovely, but I always preferred the fine arts over the decorative arts. So does the antique market, I believe.

I believe that artists who choose to work in ephemera and institutions that choose to commission such works do so for a reason. The completed work may be cheaper, for example, or the subject of the art object is better suited to silk than to marble.

But it is heart breaking when art objects made from paper, silk, cotton, even glass can be ruined, accidentally or over time.

In all the years I studied art history and collected art objects, I must admit that it did not include textiles. So while I know quite a lot about fine arts (paintings, sculpture and architecture) and decorative arts (gold and silver, tiles, furniture, brass, stained glass, illuminated manuscripts etc), textiles seemed less important.

Two more thoughts. Why did Bauhaus encourage all the female students to select the weaving workshops? And why is Josef Albers famous and Anni is less known?

Hi again, About your comment to Joseph, referring to the glass ceiling for and gender stereotyping of female artists. Very true, but given the state of things, female artists were still able to make remarkable contributions to the aesthetic realm. A while ago I studied Enid Marx and Marion Dorn, two remarkable textile designers who worked in Britain--I am sure that you know of their designs.
--Jim

you are quite right, of course. But remember that the Bauhaus Academy was a _very radical_ institution, set up to welcome all talented artists, regardless of their gender, religion or nationality. Walter Gropius had leaflets published in the main European languages (Russian, German, Yiddish etc) and pinned them on windows of art shops and galleries all over central and Eastern Europe.. in 1919!!

Anni Albers very much wanted to paint... she was not happy when she was put into the weaving workshop with all the women.

Wow! And this is on my doorstep and I have never heard of her. I must get to Tate Modern next month - that's always a joy anyway. Imagine being taught elements of design by Kandinsky and Klee!
Textile designs are more generally to be seen at the wonderful V & A of course.
CLICK HERE for Bazza’s accidentally rhadamanthine Blog ‘To Discover Ice’

I didn't know anything about the Tate Modern exhibition either. But I will be starting to lecture in the new academic year (early Feb 2019) on Bauhaus and thought I might find plenty of 100 year anniversary celebrations in different countries.