Some British women got the vote in 1918! Thank you, New Zealand and Australia!

The dates re suffrage across Europe are telling. Switzer­land introduced universal male suf­f­rage in 1848, the same year as it came to France. Danish voting rights came to men 30+ of good reputation in 1849. The North German Confederation enacted suffrage for all adult males in 1867. Suffrage came to all men aged 25+ in Belgium in 1893 and in Austria in 1896. Full male suffrage in Norway arrived in 1898.

The women's suffrage campaign in New Zealand began as part of a late C19th movement for women’s rights that spread through Britain & its Empire, USA & Europe. The movement gathered momentum from the early 1880s, especially following the establish­ment of a New Zealand Women’s Christian Temperance Union. This movement was shaped by two main themes: a] equal political rights for women a la John Stuart Mill and b] a desire for the moral reform of society!

Invigorated by the New Zealand suffrage victory in 1893, many NZWCTU activists travelled across the South Australian colony to obtain signatures for a suffrage petition. The NZWCTU suffragists were crit­ically important in this state campaign; women were able to vote in the South Austral­ia state el­ection as early as 1894! In a few years, Australian women could vote in both state and, post Federation (1901), in national elections as well.

So why did women in Britain have to battle for decades for equal votes? Perhaps the British government had never granted ANY reform without pain and conflict. So let us look right back into C19th history. Formal legislation was easy to track but Prof Pat Thane provided information on the events that happened outside Parliament.


The Great (1st) Reform Act of 1832 gave the vote to men meet­ing property qualification and redistributed Parliam­entary seats to represent urban areas properly. Alas the Act specified that only males could vote, excluding women with property who had been able to vote before then. 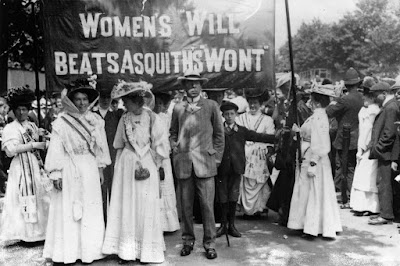 Procession to the 'Monster Meeting' in Hyde Park, 1908

Chartism was a working-class movement for political reform across Brit­ain. The movement gained particular support in parts of Britain where workers were most egregiously exploited. The movement was strongest in 1838-48 when three Chartist petitions, signed by millions of workers, were presented to the Commons.

In Britain the issue of parliamentary reform deteriorated as the Chartists deteriorated. John Stuart Mill stood for office, supp­ort­ing female suffrage in 1865, but his 2nd Reform Bill to Parl­iam­ent failed. The National Society for Women's Suffrage was formed in 1867 and in that same year, Repres­ent­ation of the People (2nd Reform) Act extend­ed the vote to urban working men who met property qualifications. The secret ballot was introduced in 1872.

The very important Married Women's Property Act, passed in 1882, allowed married women to own their own property instead of it being automatically transferred to their new hus­b­ands. This Act would eventually change one crisis in women’s voting rights.

Representation of the People (3rd Reform) Act of 1884 successfully addressed the imbalance between men's votes across the electoral districts. But an amendment to this 3rd Reform Bill, to give women the vote, failed.

The National Union of Women's Suffrage Societies/NUWSS, formed in London by Mil­licent Fawcett, was still trying to build legal supp­ort for the women’s movement in 1897. The NUWSS had 20+ national societies supporting its agenda.

But drastic action was increasingly needed. In 1903 Emmeline Pankhurst, long associated with the militants’ campaign, founded the Women's Social and Political Union/WSPU. With her daughters Christ­abel and Sylvia Pankhurst, the WSPU’s tactics heated up and started to include hunger strikes, smashing win­dows and arson of unoccupied churches. Arrests followed. 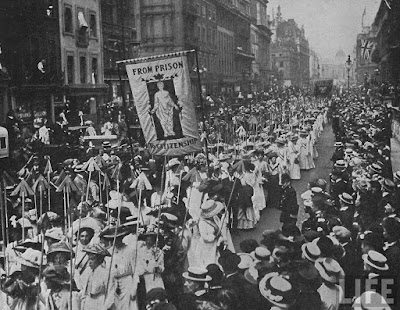 In 1906 suffragettes carried banners during a demonstration in the House of Commons’ Ladies Gallery. The Prime Minister and many of the MPs were in favour of women's suffrage, but nothing chan­g­ed and des­p­eration set in. 500,000 supporters attend a mass rally in Hyde Park, but the new Prime Minister Herbert Asquith wouldn’t face the women. Not for the first time, the suffragettes smashed windows in the PM’s residence in Downing St and chained themselves to railings.

Shame, Asquith, shame :(  The Conciliation Bill of 1910, which would have given women the vote, was supported by a majority of MPs but the Prime Minister decided to block the legis­lation. Suffragette marches by the National Feder­at­ion of Women Workers continued and always ended up in court.

From 1910, the Labour Party boomed. It supported education and medical care for children, work for the unemployed, eight-hour workdays, fair wages for local authority employees, municipal hous­ing, slum clearance schemes and assistance for aged paupers. And Labour was the only party comm­it­ted to votes for all adults. Not all women supported the Suffragettes, but a fear of feminism and of worker power terrified the Conservatives.

Many Australian & New Zealand women found themselves in Britain between 1903-14, and offered their British sisters help, guidance and advice. Vida Goldstein exemplified this support when she visited England in 1911 as a guest of the militant Women’s Social & Political Union. Other Antipodean women gave rousing speeches across Britain.

The 1913 Prisoners Temporary Discharge for Ill Health Act was an attempt to stop suffragettes from becom­ing martyrs, by dying in custody. Sadly Emily Davison was knocked down by the king’s horse at the Epsom Derby, and died from her injuries!

Campaigning was muted during WW1 because national priorities chang­ed. In 1916-1917, the House of Commons Speaker chaired a con­fer­ence on electoral reform that recommended a war-time comprom­ise. This Represent­ation of the People Act was finally passed in 1918, all­ow­ing “women over 30 who met a property qualification” to vote. The Act also gave the vote to ALL males over 21, abolished property restrictions for men, and extended the vote to military-men who were 19. Yes there was still inequality between women and men, but for the first time since 1832, some British women could now vote. The granddaughters of the original New Zealand voters were joyous.

The Daily Mail campaigned against increased women’s suffrage be­cause, they said, “it may bring down the British Empire in ruins”. Cons­erv­ative PM Stanley Baldwin promised the vote to all women after the 1924 election, but he lied. Baldwin only allowed the Equal Franch­ise Act in 1928. Afraid that Labour would win the next election, the Act provided that women over 21 could now vote. Gender equality in voting at last!

Huge anniversary - we should all raise a glass. I'm not normally very sympathetic when folk start applying modern standards to historical facts, and being shocked at the way our ancestors behaved. That was then - and this is now. But it does hack me off that people don't realise what went into gaining the basic rights we take for granted, not least universal suffrage. And how on earth could 'universal' exclude women??! Good grief. The cynic in me does wonder would have happened without WW1; how long would people have had to wait? On a related point, given that we now all vote for these jokers - and pay for them - how is it we've ended up with the bunch of numpties we currently have? Can we get rid of them all and start again, please?

Herbert Asquith and Stanley Baldwin got away with unforgivable political delays and unfulfilled political commitments. But then which voters were going to complain?

Hello Hels, It seems that people never learn the basics of civil rights--we have to go through the same struggles in the same way for each new issue. I wonder if these issues are always just a mechanism for those in control to keep their power, or how strong is the psychological urge for the average person to maintain the status quo. People continually seem to be idiotically duped by those "leaders" who claim they can best profit by blaming some "enemy."
--Jim

In the face of nasty Parliamentary obstinacy, WW1 probably greatly sped up the voting rights for older women. Not only did women lose their husbands and sons during the fighting, but they replaced the men in factories, shops, farms, hospitals and trams. They suffered the same injuries as the men had, but worked long hours and were paid much less.

The irony of women not being represented in Parliament and not having the vote was exactly as you say. While many men wanted equal voting rights for their wives and daughters, and turned up to demonstrations, Asquith and Baldwin could procrastinate as much as they wanted. They were not accountable to women in any way :(

Giving women the vote may "bring down the British Empire in ruins?" "Women will vote Labour". "Women will disobey their husbands". "Women will no longer make dinner for their children if they are busy voting". Good grief!

The arguments for not giving women equal voting rights were so absurd, you are right looking for reasons that are not open to logical analysis.

And it's a story that has not ended yet! Workplace equality is nowhere near fulfilment at this time. It seems that the women of Europe owe a dept to their antipodean cousins.
CLICK HERE for Bazza’s superficially appealing Blog ‘To Discover Ice’

Spelt out like that, it all seems quite ridiculous. While I knew it was a long battle, I didn't realised it wasn't until 1928 that the right to vote was granted.

that is true, but even then progress was slow:

The Marriage Bar meant that women working in education were not permitted to teach after marriage. Women’s teaching status was commonly restricted to ‘temporary’. This was lifted in 1956.

From 1966 married women were no longer forced to relinquish their paid work, and forfeit their superannuation rights or compelled to attempt to conceal their relationship status upon getting married.

"battle" is the correct word.

Women stood on the streets as early as 1891 to collect 30,000 signatures for a petition to present to the Parliament of Victoria. It was immediately tabled in Parliament, with the support of Premier, and followed up by other peaceful displays of women’s rights until successful. The desperate and sometimes violent British battles for women's suffrage could not have been more different from New Zealand and Australia’s peaceful campaigns.

Imagine the husband going out of the front door to vote, telling his wife "Don't worry dear, I will keep your preferences in mind when I vote".

I think not! By 1918 the time had LONG passed when men could take responsibility for what their wives thought.

Yet if a woman wanted to vote Labour because of the party's commitment to gender equality, and her husband was a Tory, he could either ignore her or could explain patiently that women's views were irrelevant. Lose lose :(

It was a long and hard road to get women the vote. There was a particularly high hill to climb here- the Victorian attitude to women in the UK seems to have been particularly condescending and repressive. As indeed was the attitude to pretty well everything, I sometimes think! :-/

condescending, yes. The UK was the home of democracy, Enlightenment, control of royal power and a Toleration Act (hmm). Yet even for men, Britain was slower in becoming democratic than many other countries in Europe etc. Only with the third Reform Act in 1884 did Parliament extend male voters' rights to rural areas, for example. And male non-householders eg servants in employers' homes or soldiers in barracks only got the vote in 1918.