I love travelling on trains and ships, but not so much on planes.

St Pancras is a C19th station that provides regional, inter-city, continental services to London. It is London’s second busiest railway station, the terminus for Eurostar trains arriving from Europe. But who was St Pancras?

A short Latin account of his martyrdom suggested that Pancras was born to a wealthy Christian family in Phrygia (Turkey). After the death of his par­ents, he moved to Rome with his guardian. There they both gave shelter to Christians persecuted by the Emperor Dioc­letian (284-305 AD). When the Emperor heard of Pancras’ eff­orts to save Christians, he im­mediately summoned him. He tried to dissuade the 14 year old him from Christianity but Pancras was adamant. Enraged, the Emperor ordered Pancras' immediate beheading and burial in Rome c287CE.


What made Saint Pancras' cult so potent were the mir­acles assoc­iated with his relics. No wonder that Pancras’ relics were soon distributed to many other churches, towns and countries, even Britain. The relics of Pancras sent by popes to England were used to re-consecrate old Romano-British churches. And as a result, churches dedicated to Pancras include St Pancras Old Church in Camden, from which the railway station took its name.


Before the 1860s, the London Midland & Scottish Railway/LMS had no direct line into London, routing its goods and passenger traffic via the London and North Western railway to Euston, and from 1858 via a route into Kings Cross station, operated by the Great Northern Railway. They wished to ex­tend its line from Bedford to London in order to compete for the Yorkshire railway traffic. Foll­owing disputes in 1862, Midland Railway got a bill from Parliament for a route from its line at Bedford via Luton and St Albans into St Pan­c­ras, its suitably grand terminus! 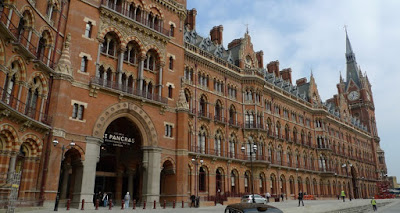 The Victorian neo-gothic station was designed and built in two parts; the train building and the hotel frontage. Midland’s consultant engineer, William Henry Barlow, designed the extension route and station layout, including the single span arched train shed built from iron and glass. At 243’ by 110’ high at its apex, it was then the largest ironwork structure of its kind. As the 6 platforms were tied to the ribs, the train shed area was spacious compared to other sites, making the structure much more flexible.

Because the line had to bridge the Regents Canal, the platforms at St Pancras were built on a high, imposing level. Resting on 850 cast iron pillars, this gave the station space underneath for storage of goods. The distance between the columns was measured using one of the Midland Railway’s most lucrative goods: beer.

In 1865, a competition was held to design the front of the station and hotel, won by famous neo-gothic architect George Gilbert Scott. Construction of the hotel started in 1868, but an economic downturn meant that the prominent Midland Grand Hotel was only finished in 1876. The hotel was expensive, with a grand staircase, rooms with gold leaf walls and a fireplace in every room.

In 1923 St Pancras was transferred to the management of the London Midland & Scottish Railway which focused its activities on Eus­ton. And so began the decline of St Pancras over 60 years. In 1935 the Midland Grand Hotel was closed due to falling business, so the building was used instead as office accommodation for railway staff and renamed St Pancras Chambers. 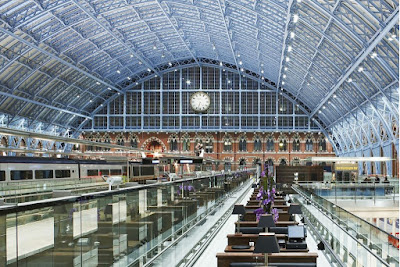 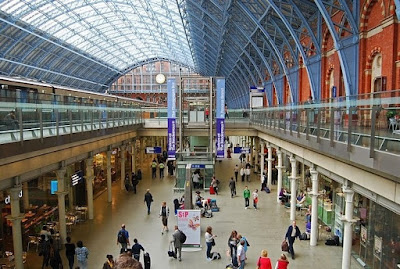 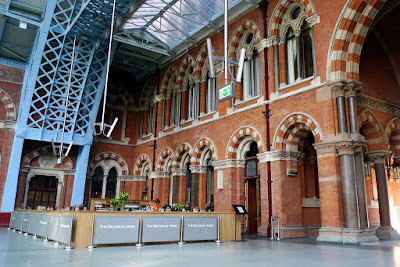 Barrels of beer had long come to London from the Bass Brewery in Burton on Trent. Open­ing up the station undercroft allowed developers to let in the light from the roof. The building held the new Eurostar lounge, shops, restaurants and food halls, created in the space Barlow had originally designed for beer barrels. The storage and distribution of ale under the station platforms continued up until post-WW2, with the arrival of the last steam train from the brewery.

During WW2, the station played an important role for troops dep­arting for war and for children being evacuated out of London. Although the station was hit hard during the blitz, there was only super­ficial damage and the station was quickly functioning again.

Throughout the 1950s-60s, St Pancras’ decline continued and British Railways tried to close and demolish the station. Writer John Betjeman led a campaign to save the station and hotel, and in Nov 1967 successfully had the buildings declared Grade 1 listed, just before demolition was due to begin. Although the buildings were saved, the train shed roof fell into a state of serious disrepair.

The Channel Tunnel opened in May 1994, but high speed trains were only able to reach their maximum speeds on the French side of the Chunnel. In 1996 the gov­ern­ment passed the Channel Tunnel Rail Link Act, authorising the construction of a high speed line from the Chunnel to a redeveloped St Pancras International.

St Pancras’ revival started: to extend platforms long enough to accept Eurostar trains, an add­it­ional train shed to the rear of Barlow’s original was designed by Foster & Partners. The west wall of the station was rebuilt using 16 million bricks, made exactly as the original was. New public works of art include the statue of the station’s “saviour” John Betjeman and the 30’ tall bronze sculpture called The Meeting Place, under the station clock. Oak doors for the main entrances were made anew.

St Pancras International Station was officially opened on in Nov 2007 with Eurostar and East Midland services. At the end of 2009, high speed domestic services began between St Pancras and Kent. 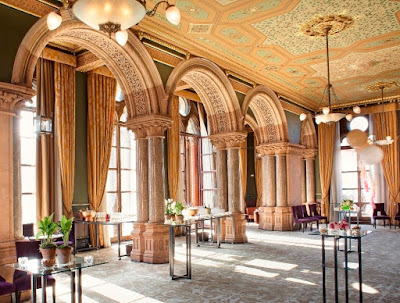 The company that owns and operates the station has launched Cele­brate St Pancras – The People, The Place, The Journey this year. Its exhibition, open until the end of 2018, analyses the construct­ion and transform­ation of the space, role of women in the rail­way industry, impact of world wars and the station’s brewing heritage. St Pancras ale, brewed by Rivers Brewing, is available at The Betjeman Arms in the station.

It's a wonderful station and aren't the blue roof trusses attractive. While I knew it was in a state of disrepair before it became the Eurostar terminus, I didn't know it came so close to demolition.

If only the building of Flinders St railway station would have progressed so smoothly. How many architectural competitions did Melbourne have and how many prizes were awarded?

Hello Hels, So many important buildings which are now the pride and showcase of their regions were barely saved from the wrecker's ball, and a little digging shows how many significant buildings didn't make it and were town down.

Since I am getting a little hazy on London topography, I looked up St. Pancras Station and find it is in the center of things--next to the British Library, and not far from University College London, Russell Square and the British Museum, all places I visited, so there was no excuse for me to miss St. Pancras--more for next time!
--Jim
p.s. It is interesting how often John Betjeman's name comes up, in so many different contexts. He certainly managed to spread his influence around.

I knew that St Pancras Church had been accidentally destroyed in the Great Fire of 1666. But this was such a tragedy for London that no-one would ever imagine that there would later be an official British Railways plan to pull St Pancras Railway Station down.

What were British Railways thinking????? If the St Pancras buildings had not been quickly declared Grade 1 listed, I am certain that the destruction would have been complete :(

In the late 1890s and early 1900s, several architectural competitions were held to choose the design for a new station building on Flinders St corner. The first prize was distributed each time, and eventually, most of the station was completed in the years before WW1.

Even more amazingly, there were specialised facilities that we moderns never see: the grand ballrooom, a gymnasium, a basement hat shop that opened in 1910, the clock tower, a mailroom etc etc.

as Poet Laureate in Britain from 1972 on, we might have expected him to be actively involved in protecting the nation's literature and other related arts. But I had not expected John Betjeman to be so active in saving architecture, especially Victorian architecture. He couldn't save Euston Arch but it made him even more determined to work on the Bath and the Oxford Preservation Trusts. Bless his heart.

Where is the Betjeman Arms? Is "arms" spelled correctly?

The Betjeman Arms pub was opened in 2008 inside St Pancras International, under the arches. In other words it is where passengers sit to eat and drink, before getting on the train to Paris. In summer, lots of people prefer to sit in the pub's large outdoor terrace.

I will look for a photo to add, to honour the Poet Laureate :)

Hi Hels - I used to walk through there when they were updating the station for Eurostar and while the hotel was still closed ... but occasionally see it when I go to the British Library - it'd be lovely to see round. St Pancras Old Church - I used to walk through the graveyard to see my mother in the original St Pancras workhouse - now hospital of varying sorts ... I should have stopped to look more thoroughly - but the journey was long enough from the south coast there and back rather more often than I'd like ... cheers Hilary

*nod* The trouble with having wonderful historical and architectural experiences when young is that a] we didn't appreciate our good fortune back then and b] now we don't have the detailed photos or memories to write up blog posts in middle age.

I had the same experience re St Albans Herts' amazing architecture, even though we lived there for 2 years *sigh*

I love the architecture of the station.

I enjoyed reading about the relics of St Pancras. I had not seen that history before.

Neither had I! We normally think of London and other historical cities has having medieval or early modern origins. Not Roman origins.