How close was Salvador Dali to Sigmund Freud?

The main founder of the Surrealist movement and writer of the Manifesto of Surrealism in 1924 was André Breton (1896-1966). According to Breton in 1924, the Austrian psychoanalyst Sigmund Freud (1856-1939) “very rightly brought his critical faculties to bear upon the dream. It is, in fact, inadmissible that this consider­able portion of psychic act­ivity”. Also Breton credited Freud’s ideas with discovering “a current of opinion that was finally forming and that the imagin­ation is perhaps on the point of reasserting itself, of reclaiming its rights”. So André Breton and Max Ernst were very knowledgeable about Freud's beliefs. They saw that Surrealism was the most popular modern art form because it was a special, dogmatic and theoretical art that revealed human emotional truths. The theory it illustrated, i.e Freud's, was true as well.

Freud's conception of the unconscious and the importance of dreams en­c­ouraged painters, sculptors and writers to pay attention to their pers­onal world of dreams. The thoughts and images they prev­iously would have dismissed as absurd or illogical would now have a meaning. His art explained that “the sublimation of the artist's unsatisfied libido is responsible for producing all forms of art and literature whether it be painting, sculpting, or writing”.

At that time, Breton and Freud were admired by the rest of the Surrealist circle. Familiar with Freud’s theories of accessing the subconscious for surreal inspiration, Spanish artist Sal­vador Dalí (1904–89) increasingly considered dreams central to human thought. 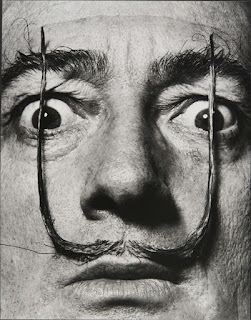 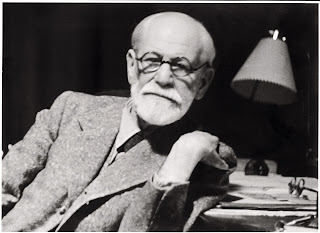 Dali was enthralled when he discovered psychoanalysis and dreams, reading Freud’s Die Traumdeutung-The Interpretation of Dreams that was first published in 1899. "It was one of the greatest discoveries of my life. I was obsessed by the vice of self-interpretation, not just of my dreams but of everything that happened to me, however accidental it might at first seem". Since that moment Dalí's masterpieces became interpretations of Freud’s psychology as fixations, complexes and psychosexual development.

It was clear in Dali’s paintings how Freud’s psychoanalytic theories inspired the Spaniard and left their mark on his ic­on­ography. Dalí ex­plained his paintings in this way “to express for the first time in images Freud’s discovery of the typical dream and the consequence of a chance event which causes the sleeper to wake up”. “The only difference between imm­ort­al Greece and the present time, is Sigmund Freud, who discovered that the human body is full of secret drawers that only psycho­an­al­ysis is capable of opening”.

In many of Dalí’s artworks there was a surreal, unconscious, dream-like quality, for example in the painting Persistence of Memory 1931. The message in the artwork was that a person’s subliminal unconscious mind was present in daily life and had more power than man-made objects of the conscious world.

Clearly influenced by Freud’s ideas, Dali's goal in 1936 was to bring the world of dreams, visions and hypnagogic imagery to tangible, concrete reality, using his unique language.

Dalí wanted to meet Freud. During the 1930s, he went to Vienna sev­eral times but failed to meet him. Dalí said in his autobiography The Secret Life of Salvador Dalí: "I remember with a gentle melancholy spending those afternoons walking haphazardly along the streets of Austria’s ancient capital. The chocolate tart, which I would hurriedly eat between the short intervals of going from one antiquary to another, had a slightly bitter taste. In the evening I held long and exhaustive imaginary conversations with Freud; he came home with me once and stayed all night clinging to the curtains of my room in the Hotel Sacher.” Oh dear. 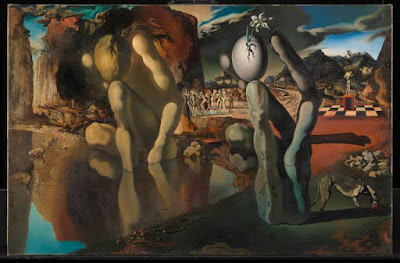 In 1938 Dalí finally met Freud in the exile’s London home in Hampstead. Dali took his painting The Metamporphoses of Narcissus 1937. Like many of Dali's works, this was indeed Freudian, referring in its title, content and style to Freud's interpretation of Narcissus sitting in a pool. During the visit Dalí sketched Freud, and the resulting artwork Portrait of Sigmund Freud now hangs in the Freud Museum. We know Freud loved art; his house-museum walls are covered with drawings, paintings, sculptures, antiques and collectibles.

On meeting Dalí, Freud was said to be impressed. He wrote about the Catalans’ technical mastery to another Austrian Stefan Zweig: “I was inclined to look upon the Surrealists, who have apparently chosen me as their patron saint, as absolute cranks. The young Spaniard, however, with his candid fanatical eyes and his undeniable technical mastery, has made me reconsider my opinion”.

But Freud's approval didn’t make sense to me. Freud was a very proper, formally dressed, German-speaking gentleman! Dali had a wild, eccentric face, pupils that widened with ? drugs, a ridiculous moustache and an absurd, irrational personality. Dalí was also an anti-Semite and a supporter of the Fascist dictator of Spain, Franco. Nonetheless Freud was right when he said Dalí was a technical mast­er.

Even after Dali left the Surrealists in 1938 and pursued science and religion as his subjects, Surrealist imagery and Freudian symbolism continued. Freud died in 1939, during Dalí’s best period.

In 2009 Dali Museum in St Petersburg Florida displayed 70 works from the mus­eum’s permanent collection, centring on two important influences in Dali’s life: Sigmund Freud and the C20th Avant-garde movement which closely based on Freud’s writings. The Dali, Freud and Surrealism Exhibit spanned Dali’s entire career, beginning with his earlier 1930s work where his concern with landscape and family portraits preceded the influence of Freud and Surrealism. 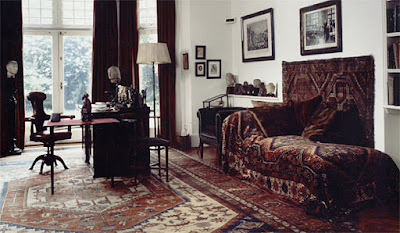 Or read Salvador Dali: Provenance is Everything, where Bernard Ewell discussed the Freud-Dali connection.

Hello Hels, Sometimes I wonder whether there was so much antisemitism in Europe of that period that Jewish people could not avoid everyone "on the other side," and that a certain minimum degree of antisemitism was simply accepted as ambient, as racism was (and is) for many Black Americans. It is true that some of those Gentiles went out of their way to help the Jews when the crisis came, but also that some Jews thought that their friends, connections and status in the community would somehow save them.

Dali's paintings certainly do seem like Freud's theories come to life. Even if we don't take Freud so literally these days, Dali's paintings do make eloquent statements about mutability and transformation. Incidentally, when I was growing up in Beachwood, Ohio, the Dali museum was located there, in a warehouse next to an office building, and all were welcome to drop in! I wish the museum had stayed put a while longer, so I could have appreciated the paintings at a different level.
--Jim

I wonder if Dali was ever given a proper psychiatric diagnosis or if he acted as a mad man for so many years that his character actually became his reality. No wonder he selected a psychiatrist to idolise.

Dali's moustache is all very well, but those awful stray eyebrow hairs....

you keep on amazing me! Of all the cities in the world to grow up in, you lived in Beachwood Ohio with its Dali Museum :) When I was a teenager I heard never heard of Dali and had no access to modern art, even had I wanted to.

I agree that we don't take Freud's psychiatry too literally these days, but it took another art historian to make the link between Dali and Freud for me. Dali's timing in capturing Freud's world was perfect.

No psychiatric records were prepared or remain, but assessments were done from Dali's letters, interviews and autobiography. Most notable were his exhibitionism, ambiguous and inadequate sexual identity, paranoia, phobias, self harm (cutting) and temper tantrums. Mental illness in the family revealed that Dali’s grandfather committed suicide and his paternal uncle also tried to commit suicide.

Even if Dali initially did all this for the money and fame, in the end it became his real (and very disturbed) personality.

even if you think Dali's facial features or clothing were utterly horrible, they did the trick. I showed the above photo of Dali to adult students who had no particular knowledge of art history, and everyone immediately knew it was Dali. These students would not have recognised van Gogh or Cezanne if the artists had personally walked into our class room.

I see you are interested in art, but I don't accept advertising. Do you handle Dali?

I remember seeing a Dali exhibition in Ghent, Belgium. He was not a restrained artist and was very frank, immodest and almost pornographic. He did not seek to hide any part of his life and there was certainly no self-censorship! He was a wonderful draughtsman.
CLICK HERE for Bazza’s ultracrepidarian Blog ‘To Discover Ice’

*agreed* Restraint, modesty and self-censorship are not qualities that could ever be applied to Dali :)

But skilled draughtsmanship is a quality we have not yet discussed in detail. Nowhere can this be seen better than in Persistence of Time, Bacchanale, Liquid Desire etc.

Hi Hels - I'll need to be back to read this ... as my mind cannot take it in with other things going on. Your post certainly gives me food for thought ... so I'll be back anon - cheers Hilary

I hear you, Hilary!

After months of ambivalence, I AM finally retiring this December. It has been a wonderful career since Feb !971 but the time has come to slow down a bit.

The blog posts will continue, happily :)