By the time we were selecting our own clothes in the 1960s, the times were too hippy for my generation to tolerate Christian Dior (1905–1957)’s post-war fashions. But now it is time for us to re-examine our old views.

Born in Normandy and moved to Paris when he was a child, the Dior family name was known for his father’s successful fertiliser comp­any. As an adult, Dior immersed himself in the capital’s creative scene, under the care of Robert Piguet, fashion designer who trained Hubert de Givenchy.

Following France's surrender to Germany in 1940, Dior returned to Paris, where he was soon hired by couturier Lucien Lelong. Through­out the remaining years of the war, including when Dior was serving in the French army, Lelong's design house dressed the women of the Nazis and of French collab­orat­ors. During this same time, Dior's younger sister, Catherine, was working for the French Resistance. 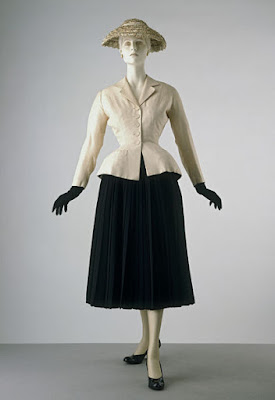 How did Christian Dior help to restore an embattled post-war Paris as the capital of fashion?  Louise Quick says it was Feb 1947 when the designer’s scandalous range shocked post-WW2 society and rev­olut­ionised the fashion industry forever. Taking place just two years after Victory in Europe Day, Dior stunned his world with his first fashion collection in Paris. Models wore swathes of rich fabric, long, heavy skirts and dres­ses synched at the waist.

Dior’s designs were about creating an overtly hourglass silhouette. Of 90 impressive pieces in Dior’s collection that day, the most iconic was the Bar Suit- a large, dark, feminine skirt, padded at the hips, teamed with a silk cream blazer synched at the waist. It was a figure that set the standard for fashion and femininity for the next decade, reflected in the famous styles of 1950s. Hollywood stars like Marilyn Monroe, Ava Gardner and Rita Hayworth loved his style, as did the fashionable young royal, Princess Margaret. She chose one of Dior’s designs for her 21st birthday, immortalised later by Cecil Beaton.

Warmly received everywhere, the designs spread across Europe and made their way over to New York. While the Dior designs may have seemed shocking back then , they don’t necessarily seem shocking today. So it’s important to remember the huge effect WW2 had had on everyday clothes. The fashion industry was hit by war-rationing and austerity measures, and there was a significant war time reduction in mat­erials, skilled workers and factory space. 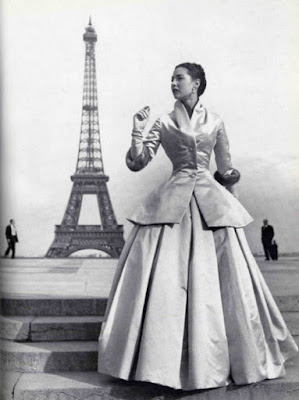 With the introduction of rationing in Britain (and Australia) in 1941, simpler, slimmer outfits were made as more coupons were need­ed for the fabric and skilled handiwork. So early 1940s clothes were dominated by simple suits and knee-length dresses with boxy, manly shoulders. Decorative elements like pleats, ruching, embroid­ery and even pockets were restricted under austerity meas­ures, while luxury additions like hats and lace were heavily taxed.

After food, clothing was the hardest hit by the demands of the war effort, which explains the government’s Make-do And Mend pamphlets; they provided housewives with useful tips on how to be both frugal and stylish in times of harsh clothes rationing. A band of London designers even came together to Incorporated Society of Lon­don Fashion Designers/Incsoc, to popularise austerity-era designs.

In 1942, Incsoc created 32 designs of utility styles, fashionable outfits that used to limited resources, that they then presented to the public. Restricted to tight fabric rations, Incsoc coats, dresses and suits had no pleats, tucks, frills and no unnec­essary buttons. They were intended for all seasons, with paper patterns made available for those wishing make them at home.

While many of the leading fashion houses and magazines were happy with the war-time designs, fashion-conscious citizens were unsure about mass-produced styles. And some critics thought these Mayfair designs were actually too fashion-oriented for women in the war factory. Nonetheless these simpler, utility-style designs became the general trend, represent­ing both fashion and dedication to the war effort. And it carried on, because clothes rationing didn’t end until 1954!

So it was shocking post-war to see visions of Dior’s models covered in lavish materials, fine details and accessor­ies. While Incsoc’s utility-style dresses had been rest­ric­ted to 1.8 metres of fabric, Dior’s more elaborate pieces often used 18+ metres each. His glamorous, fem­in­ine style was a comp­l­ete rejection of the wartime austerity that covered Eur­ope.

Fashionistas mostly approved of the lavish designs and the move away from boring wartime trends. The bulky coats and capes to cover the large skirts were surp­rising. As were the pockets, synched waists, exaggerated bosoms and classy acc­essories; but it was the long skirts that were the most controv­ersial. While 1940s fashion generally had knee-length skirts and dresses, the New Look wasn’t concerned with fabric rationing .... so hems could fall to mid-shin. 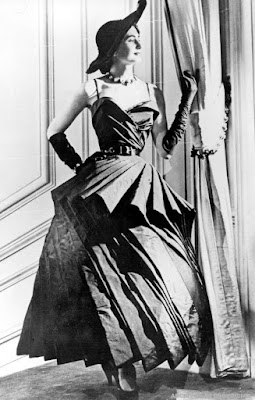 
There was another, more sexist explanation. Post-war women were encour­aged to become homemakers again, moving out of the work-place so men would have jobs. The feminine, flowery and imp­r­actical Dior fashions were therefore actively encouraged in Western countries.

In 1950 Dior licensed his name on luxury accessories eg neck-ties, hosiery, furs and handbags, the first designer to do so. Dior died of a heart attack in 1957 while holidaying in Italy at 52.  He had single-handedly revived Paris’ struggling post-war fashion industry, particularly among society’s glamorous upper class. But then the role of artistic director moved to a young assistant, Yves Laurent.

To celebrate the anniversary of the House of Dior,  the National Gallery of Victoria pres­ented The House of Dior: Seventy Years of Haute Couture in 2017. It included a lavish display of 140+ garments designed by Christian Dior from his iconic 1947 New Look Collection and on. The exhibition narr­at­ed the fashion house’s rich history, Christian Dior’s early influences, his design codes, insights into the Dior atelier workrooms, accessories that played a role in the complete Dior look and the six successive designers after Christian Dior died in 1957. The signature ballgowns and evening dresses wowed the NGV audience.

Hello Hels, As time goes by, I find myself more interested in things that I previously ignored, but that were important indicators of their times, and interesting in themselves. One of these is fashion and materials, which as you pointed out, reflected availability of materials, as well as men's and women's (as well as other types of groups') roles in society, to create the look of an era. Since his fame has been continuous, I had no idea that Dior died so young.

One question, though. Wouldn't an 18-meter outfit seem heavy and warm, especially after getting used to 1.8-meter ones? (Even in Cleveland's frigid winters, I always wore tropical-weight suits.)
--Jim

Your blog is great. I read a lot of interesting things from it. Thank you very much for sharing. Hope you will update more news in the future.
geometry dash meltdown
the happy wheels games
animal jam play wild

it is very tempting to assume that the tastes and experiences of "our times" and "our places" are eternal. When mum showed me photos of her dresses from the post war period, I thought it just proved how horrible taste was then, and that her generation changed to Laura Ashley as soon as their daughters showed them Proper Taste. (Excuse my 18 year old self-centredness)

But of course you are right - very few historical events happen randomly. My mother's generation had food, clothes and petrol rations for sooo long (1939 until at least 1948) that they luxuriated in more expensive clothing, more expansive materials, bigger meals, more modern cars etc.etc as soon as they could.

Heavy and warm textiles were certainly ridiculous in warm temperate climates... but people who could afford it, did it anyhow!

thank you but no advertising please. Do you enjoy Dior fashions?

Have you read Maureen Footer's new book - Dior and his Decorators? I've always found Dior fascinating but when you put him in historical context he was really revolutionary (although many say it was the zeitgeist of the time). Have you seen the charming Angela Lansbury movie ' mrs harris goes to paris' or read the book? I loved that as a kid!

I do remember Mrs Arris going to Paris to buy an evening gown of her own. But I didn't remember that is was the House of Dior that had been the focus of the story. And even if I did, it wouldn't have meant as much back then (in the 1965 era) as it would to me now. At the time I was a hot socialist and was very interested to see what a working class woman would make of haute couture, and what the House of Dior would make of her.

Thank you for the Maureen Footer reference... it was first published last month, so I will ask my bookshop to order me a copy.

I have added Dior's Cyclone design from 1948. Whether you like the dress or not, you have to admire its complex construction and design.

Poor Dior. He wasn't very old, was he? What happened to him?

I had originally thought that French resistance men might have hunted him down because of suspected collaboration with the Germans during the war. But no, Dior had a heart attack while on holidays, apparently after over-vigorous sex. He was only 52.

The styling has an elegant look but you would have to have the figure to able to wear one of those designs.

Yes! The woman must have had a great figure, plenty of money and lots of free time to socialise in elegant surroundings.

In 1947, when most men were still dealing with injuries and employment after their demobilisation, Dior must have been more interested in reestablishing France's cultural and fashion leadersip in the world.

I enjoyed the Dior exhibition but I have to say that the thought of wearing all that fabric gives me the horrors . Its just like foot binding , designed to keep women in their place . I am with Coco Chanel who developed her suit in a reaction to Dior and all that fabric .Fashion has been used to control women and their place in society forever and it is time it stopped . Having said that I do appreciate the beauty and the amazing skills that went into making these clothes . I love dressmaking myself . The making of clothes has kept me sane over many a year.

I love those styles and 1950s dresses, as well. 1950s style dresses came in again a few years ago but, unfortunately, they don't suit me at all! I can only read about these fashions and look and admire.

spot on! Coco Chanel (1883-1971) was just a bit older than Christian Dior (1905–1957) and had her greatest impact before WW2, not after. She used cheaper textiles than Dior did, used more practical designs and eliminated tight-fitting corsetry and synched waists.

No wonder Chanel thought Dior was restricting women - her outfits were ideally suited to women becoming independent and mobile, driving cars if they wanted. His wide, heavy textiles seemed to restrict women's mobility.

synched waists, low hemlines and very wide, heavy skirts only suited women who were hipless. The rest of us normals would have looked HUGE in Dior's outfits, much like only flat chested women looked good in flappers' skimpy shift dresses.

We can all but admire each new designer and then modify his/her innovations according to our own needs, incomes and tastes.