I have two important reasons for focusing on Neil Simon. Firstly my family life seemed to replicate his: Russian parents, Jewish, Yiddish-speaking, impoverished in the Great Depression and very keen on tertiary education. Secondly I saw every American play and musical in the 1950s and early 60s, but didn’t enjoy the experience until Neil Simon’s works started arriving in Australia.

Neil Simon (1927–2018) was born and grew up in Manhattan, where he lived with his Russian parents and his older brother Danny. His parents were not happy together, made worse by financial hardship caused by the Great Depression. The two boys were sometimes forced to live with various aunts and uncles, instead of in the family home. Needless to say, Danny and Neil took refuge at the cinema as children, finding particular delight in comedies.

Neil studied for a short time before signing up for the Army Air Force Reserve, then served as a sports editor for the Lowry Field Base newspaper. He studied at the University of Denver, until he was demobilised in 1946.

After returning home, Neil started work at Warner Bros, Manhattan. His career-starter came when he and Danny created a sketch for radio producer Ace Goodman (son of Latvian Jews), launching them as a comedy-writing team. The brothers soon began writing material for stars like Milton Berle (son of Russian Jews) and Jackie Gleason.

In the early 1950s, Neil and Danny Simon joined an all-star writing cast, along with the other Jewish lads in America who were involved in comedy eg comedian Sid Caesar (son of Polish Jews) in his television series. It also included Mel Brooks (son of German and Russian Jews), Woody Allen (grandson of Russian and Austrian Jews) and Carl Reiner (son of Austrian and Romanian Jews). 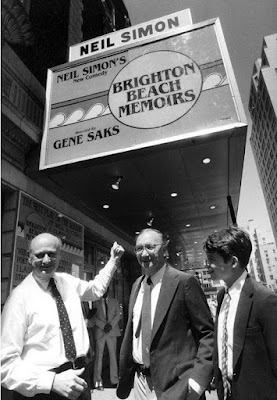 Here is something I did not know. Neil’s brother Danny wrote for many television shows including Phil Silvers Show, My Three Sons and The Carol Burnett Show.

Neil was a prolific writer, whipping out successful plays and screenplays at a rapid rate. Mostly his audiences were precisely the sort of people he wrote about: upwardly mobile, urbane New York Jews. These were people still close enough to their humble immigrant roots to appreciate having them sifted for earthy humour, but comfortably assimilated into the New World.

In 1966 and into 1967, Simon had four shows playing at Broadway theatres simultaneously: Odd Couple, Sweet Charity, Star-Spangled Girl and Barefoot in the Park. How did he expend that much energy?

Simon also adapted material written by others for his plays eg the musical Little Me 1962 from a novel, Sweet Charity 1966 from a screenplay and Promises Promises  1968 from a book. The film version of The Prisoner of Second Avenue 1975 was produced & directed by Melvin Frank (Jewish parents) from a Simon screenplay.

Wisely Simon focused on his own life experiences in later stories, with settings in working-class New York homes that he grew up in. In 1983, he began writing autobiographical plays: Brighton Beach Memoirs 1983, Biloxi Blues 1985, Broadway Bound 1986 and Lost in Yonkers 1991. Jewish family life became more explicitly visible in these autobiographical works!

Simon may not have been the most fashionable playwright, nor was he a political or experimental writer, as he stated; he didn't write social and political plays because he always thought the family was the microcosm of what happened in the world. But his work was warm, personal, comical and brilliantly crafted.

Without The Odd Couple or The Goodbye Girl, or other stories about mismatched people being thrown in flats and bars together, there would have been no sitcoms. No Friends, no Seinfeld, no Golden Girls, no Cheers, and no New Girl! Neil Simon invented the dominant form of American comedy! His own list of credits was amazing and his impact on other shows was amazing. 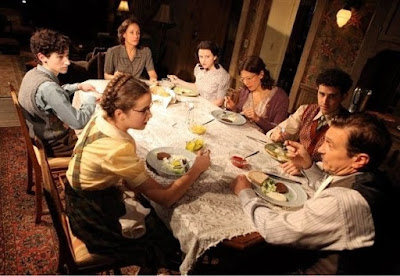 Note the connection between Simon’s wives and the industry. His first wife, Joan Baim, died of cancer in 1973 after 20 years of marriage. Simon dealt with her death in Chapter Two 1977, telling the story of a widower who started anew. He also married actress Marsha Mason, who had appeared in his stage comedy The Good Doctor and who went on to star in several films written by Simon.

Credit Loan Solution said...
This comment has been removed by a blog administrator.
September 18, 2018 5:51 pm

Oh, dear, a spam comment. Never mind. A great post. Neil Simon was special. Interesting to think about his influence on other comedy. I’ve seen quite a few of his plays, mostly performed by the MTC, but twice The Odd Couple(once with Jack Klugman as Oscar). It’s nice to have the occasional playwright whose sole purpose is to make you laugh.

You could choose to not publish any comment until you have approved it, but that is slow and clumsy. Just delete the spammers.

My parents were also Russian, Jewish, Yiddish-speaking, impoverished in the Great Depression and very keen on tertiary education. But noone in the family turned into a creative genius. Thus Simon's family must have had something special.

He just had that great touch, didn't he? Incidentally they showed all of the old Bilko episodes last year and I noticed that at least one of the Phil Silvers Shows (to use the proper name) was written by Neil Simon himself. Any Jewish person who watched Brighton Beach Memoirs would probably recognise some of their own family.
CLICK HERE for Bazza’s criticasterous Blog ‘To Discover Ice’

Hello Hels, There is a chain of eerie coincidence here. Last summer I got a stack of Neil Simon's printed plays, but in August at the last minute decided they were too heavy to carry in the suitcase. I now realize that he must have been dying as I was weighing the decision (and probably the actual books). Of course, had I known I would have brought some to read in his honor and memory, but now that will have to wait until next year.
--Jim

I had no idea he worked on so many different things that I am familiar with, especially from latter decades of last century. I never heard that he died this year.

nod... especially since the old comedies like slap stick were awful. Neil Simon's comedy, on the other hand, was familiar, domestic, clever, warm and verbally skilful.

not from his parents, I don't think. The two boys saw a lot of films when they were young and were very impressed with the entertainment industry. But Neil seemed to have been influenced in his writing skills by spending hours in the library, and by sharing insights with other clever writers like Bob Fosse.

By the way, Barefoot in the Park was Neil's longest running hot on Broadway and I barely mentioned it.

oh I agree. Watching Brighton Beach Memoirs (first performed in 1983) was not like looking at King Louis XIV - remote and unknowable. Instead it was something we could all easily identify with and enjoy.

it must have been fated, rather than being a random coincidence. It might have been a sign that you were to go on with a brilliant career yourself, in the theatre or on film and tv.

When writing his works in the blog post, I tended to only mention films etc that I knew. There were MANY others that only Americans, and only people of a certain age, would remember eg
The Slugger's Wife 1985
The Lonely Guy 1984
Max Dugan Returns 1983
I Ought To Be In Pictures 1982
Only When I Laugh 1981
Seems Like Old Times 1980
Chapter Two 1979
The Cheap Detective 1978