Leon Black, Chairman and chief executive of Apollo Global Man­agement, was apparently inspired in his love of art by his mother and his aunt, Manhattan art deal­er Grace Borgenicht Brandt. Leon’s purchase of Norwegian Edvard Munch’s (1863-1944) painting called The Scream reached a record for an auctioned piece of art when it was sold at Soth­eby's New York in May 2012 for a world record $120 million.

This ex­press­ion­ist piece was one of four vers­ions of The Scream created between 1893 and 1910, three of which are held in Oslo museums in Norway. The four known versions were 1] 1893 tempera paint on cardboard; 2] 1893 crayon on cardboard; e] 1895 pastel on cardboard that billionaire Leon Black bought at auction; and 4] tempera paint on hard cardboard, c1910. 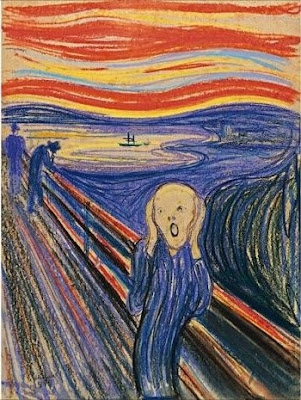 Edvard Munch’s 1895 version of The Scream of Nature

Impressive, even though I know nothing about Scandinavian art and even less about meteorology.

But it was the sky and not the price that has been a bone of contention. Munch originally wrote that the sky was “screaming blood and fire”. When the first versions of The Scream were released, they depicted a dark human-like figure clutching the head in app­ar­ent horror against the backdrop of a swirling, red-orange sky.

Some art historians suggested it was a volcanic sunset after the 1883 Krakatau eruption, while others thought the wavy sky represented a “scream” from nature itself. To understand the mystery of the fiery sky, I have cited Mark Prigg’s article in the Daily Mail, 24/7/18

Scientists at Rutgers University-New Brunswick, University of Oxford and University of London now believe that nacreous aka mother of pearl clouds, which are seen in southern Nor­way, inspired the dramatic painting. Professor Alan Robock in the Department of Environmental Sciences and his colleagues published their study in the Bulletin of the American Meteorological Society, July 2018.

Nacreous clouds form in the very cold regions of the lower st­rat­osphere, 15-25 km high and well above tropospheric clouds. These iridescent lights from below the horizon are formed when met­hane in the atmosphere reacts with ozone; they illuminate pol­ar stratospheric clouds! They are so bright after sunset and bef­ore dawn because, at those heights, they are still sun­lit.

In short, this detailed and scientific analysis of Munch's painting focused on photographs of volcanic sunsets and nac­r­eous clouds, and analysing the sky colour and the cloud patt­erns. The sky colours and patterns in Munch's paintings match­ed sunset colours better when nacreous clouds were pres­ent!

Munch’s original German title, Der Schrei der Natur/The Scream of Nature, was very carefully chosen. What was scr­eam­­ing in the painting was literally the sky; the person in the painting was putting hands over his ears so he could NOT hear the sky screaming. 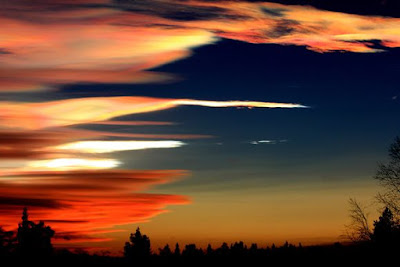 But there is no denying that Edvard Munch suffered from mental ill health. His mother died from TB when he was 5 years old and his older sister Sophie died of TB when Munch was 13. His father became emotionally unavailable when he suffered an agitated depression of psychotic proportions and financial poverty, after his wife's death. Of Munch’s three younger siblings, Peter died at 30 of pneumonia and Laura developed a schizo-affective illness in adolescence and required life-long hospitalisation.

Edvard’s diagnosis of bipolar disorder was based on his own visual and auditory hallucinations, manic behaviour and his psychiatric hospitalisation in 1908 for depression, alcoholism and suicidal urg­es. When Munch’s paintings showed a figure with an agonised expression against a landscape with a swirling orange sky, the screaming sky and the man’s screaming heart seemed perfectly coordinated. The artist’s words were percep­t­ive; he described himself "shivering with anxiety" and feeling "the great scream in nature".

Hello Hels, The idea of the "scream of nature" adds to our understanding of this picture, but the human figure, even if the gesture represents blocking his ears, is reacting with a horror that comes from within. The meteorological conditions obviously act as a metaphor for his personal life. The painting is still about human emotions and conditions.
--Jim
P.S. The idea of natural phenomena overwhelming the human scale of understanding is also reflected in Edna St. Vincent Millay's slightly later words: "And reaching up my hand to try, I screamed to feel it touch the sky."

One issue I omitted but Munch focused on. He said his father was obsessively religious, to the point of psychoneurosis. From him he inherited the seeds of madness. The angels of fear, sorrow and death stood by his side since Edvard was born.

Spot on! The natural phenomena DO stand as a metaphor for Munch's internal chaos. But unless the artist or the viewers knew about the mother of pearl clouds in Southern Norway, other metaphors would have been needed. At least if we think that artists want to communicate and not to bamboozle.

The weather and other natural phenomena are often a reflection of inner conflict or feelings. Jane Eyre is a wonderful example of that.
Your article has made me think differently about The Scream but I can't believe that Munch meant us to feel any differently than the first impression it conveys so strongly.
CLICK HERE for Bazza’s Arcadian Blog ‘To Discover Ice’

Yes,,,the first impression that the painting conveys strongly to the viewer is the very emotion that was overwhelming the artist while he was doing the painting. In depicting his own morbid mental life, Munch wrote on the painting "could only have been painted by a madman".

Mind you, if I had a family history like Munch's, I too would have been very fearful of insanity.

I have not seen a lot Edvard Munch's paintings that deal with mental ill health. Other than the four versions of The Scream, of course.

Good question that we haven't yet asked. Despite most of his work looking like interesting landscapes, have a look at his paintings called Requiem for a Scream, Separation, Melancholy, Anxiety, Death and the Child, and Jealousy.

Of course we don't know which other works Munch destroyed or hid, keeping his total "mental illhealth oeuvre" uncertain to this day.