The Tartan Weaving Mill on The Royal Mile in Edinburgh covers 5 storeys inside, with an exhibition that shows the whole process involved in tartan production: shearing sheep, working looms, making a kilt and being photographed kitted out.


So I already knew that tartan  was not described in Scotland until the C16th. In 1538, James V ordered a tartan hunting out­fit for himself and his men: they wore trews/close-fitting trousers and stockings of a warm stuff of divers colours call­ed tartan. A plaid about their shoulders, which is a mantle of divers colours, of much finer and lighter stuff than their hose, with blue flat caps on their heads.

Thus the belted plaid appears to have become a loose garment made up of 5 metres of double tartan. Highland looms could only weave a maximum width of 75 cms so lengths had to be sewn together down their long edge to make the plaid. Such outfits were practical for riding and led to the aristocratic fashion for tartan trews.

The trews were cut on the bias so that they had elasticity and clingability. The distinctive sett/pattern of the tartan was smaller than seen on the kilt and the hose was carefully crafted to match on the seams which ran up the back of the leg. Having no pockets, a sporran would be worn.

The practicality of the trews became very evident when it came to riding a horse during horrible winters. Kilt wearers could not have ridden half frozen horses very easily and in any case, horses were largely owned by wealthy families. So trews came to be regarded as the domain of the rich gentlemen on horseback, and by Highlanders when travelling in the Lowlands.

For journeying, the kilt was a length of tartan gath­ered at the waist by a belt, pinned on the shoulder by a brooch, and worn kilted on the thighs. This could be adapted, by every level of society, to create an enveloping hood.

During the Jacobite Rebellions, I loved to read how the most effective fighters for Jacobitism were the supporting Scottish clans. This led to a direct association of tartans with the Jacobite cause. Even if they was no longer identified solely with the Highlands, after 1707 they became a reflect­ion of opposition to the Union, for both men and women. Banned after the 1745 up­rising, Highland tartans were soon valued for their powerful historic value. 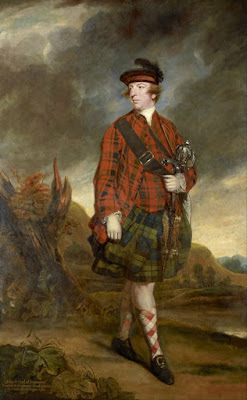 Portrait of John Murray, 4th Earl of Dunmore
painted by Joshua Reynolds in 1765

These complex political implications were relevant to art historians. Examine portraits of grand tour­ists, painted in Italy by Pompeo Batoni and his contemp­orar­ies, where portraits of one young man looked more learned and more important than the last. But no-one looked as noble as Scot­t­ish grand tourists! Loaded up with symbolism, these images portr­ay­ed wealthy Scottish lads in full Highland gear.

And when Batoni wasn’t sure what he was doing, he took tips from British artists, such as the visiting Scot, Allan Ramsey. Colonel Gordon, for example, had elected to be painted in uniform with drawn sword, kilt and swathed in a length of Huntly tartan. Note the Colosseum in the background and Roman statuary to the side.

With the Whigs moving towards liberal democracy, these pretend Highland soldiers were now Romantic heroes, their tartan unif­orm newly designed and worn with all the prestigious regalia: tassled sporrans, Glengarry bonnets, dirks, shoulder plaids with brooches. There had long been regional differences in the patterns and colour of tartan. But although some famil­ies could be associated with spec­ific tartans, late C18th Scotsmen felt free to wear any patterns.

For me, a person with no Scottish connection whatsoever, most interesting to see how the kilt had become the Scot­sman’s national dress. Two royal events promoted the C19th obsession with clan tartans. Firstly King George IV travelled to Edin­burgh in 1822 in a kilt. Sir Walter Scott requested that all the clan chiefs turn out in full hereditary tartan reg­al­ia, whether their family had such regalia or not. Retinues of clansmen marched through the capital to greet the king.

Secondly a tartan pageant staged at Taymouth in honour of Queen Victoria in 1847. Clearly their royal patronage enhanced the reputation of the material and boosted demand. High­land dress had become a formal costume associated with ceremony and ritual. Romantic history, with the imprimatur of royalty. And as the Scottish diaspora grew, it became THE mark of Scottish identity, a comfort for displ­ac­ed Scots and a statement of ethnic solidarity, without any overt political message. 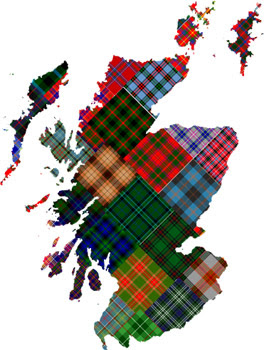 Scottish District Tartans
For a list of districts and their tartans, see Scot Clans


But how much will the Tartan Heritage Centre be just an em­otional moment for tourists, before they move on to eat hearty bangers and mash? Or will it be a seriously curat­ed historical collection that inspires research and public­at­ions.

The vision for a National Tartan Centre is that it will include a self-sustaining gateway that showcases and promotes tartan and its important Highland heritage as well as its iconic status as the defining symbol of a nation.

From traditional Highland Dress to modern fashion, manufacture and design, the past, present and future should combine to create a journey, identifying the origins of a fabric now synonymous Scotland and exploring the versatility of Tartan in its woven and non-woven forms, providing a source of identity to many people across the globe.

The Stirling Centre will be a:
· educational resource
· showcase for Scottish history and contemporary culture
· showcase for the tartan industry
- forum for debate on issues of identity and culture.

Great article! The heritage centre sounds excellent. As a Brit, the tartan is a thrilling part of our cultural mix - more so if you have any Scottish roots, of course. And I do. Is the tartan 'the defining symbol of a nation'? I also worry a little that the whole Jacobite/union thing can get very mixed up - the relationships are not simple - and, at the extremes, nationalism is an ugly, divisive, belief.

*agreed* The relationships are not at all simple! For me, the Centre will provide an important forum for discussion on identity and culture, something that historians should be having a closer look at.

Batoni and the tartans made the Grand Tourists look proud and handsome.

have a look at the portraits of Col. William Gordon, the Earl of Cassillis and all the other sons of wealthy Scottish families who did their Grand Tour to Italy. Batoni was well paid to make the tourists look dashing and learned.

Batoni's life spanned most of the 18th century, a perfect time for The Grand Tour.

Hello Hels,
I have been trying to reach your Tartan Heritage post, but when I click on it, I am taken to something called widgetserver.com, which I have never heard of. Other blogs today have no problem.

I can't make a comment because I can't read the post itself--only the first few words that appear in the reader entry. Maybe if you send me the link I can try it directly.

I hope your next post will display o.k.
Jim

The 4th Earl of Dunmore looks like a real sweetie!
CLICK HERE for Bazza’s unthinkable Blog ‘To Discover Ice’

all done! My son took two days during which time I didn't sleep, but he found the problem within 20 minutes. He deleted the problem (a translation icon) and all was well. But my hair is whiter than it was :( and who knows how many readers won't even try opening the post a second time :(

all Grand Tourists knew they would never have the opportunity again to spend a year or two abroad, learning, travelling and drinking. They had to take home as many souvenirs as they could, to remind them (and their eventual children) of the time in Italy etc. Not only did the portraits have to be handsome and beautifully groomed; the backgrounds often showed important cultural centres in Italy.

Something weird happened for this post and I kept getting redirected from you basic blog address. No matter.

Irony is topical for me. It is perhaps irony that a Jewish person is educating a person with strong Scottish heritage about tartan.

Ah, I have read the other comments now, and it was not just me.

I think the centre will be very successful. Who doesn't want to claim some Scottish heritage, even if it is very diluted.

I was so England- and Ireland-focused that I forgot to travel around Scotland for years. It was only when I began looking at Scottish history that it occurred to me to get myself north over the border *blush*.

The Centre will certainly be essential, particularly because it will provide quality history and identity to Scotsmen at home and abroad. It was not a coincidence that Parliament's Dress Act 1746 made the wearing of Highland Dress illegal in Scotland.