La Belle Epoque in Paris was time of peace, scientific prog­ress, prosperity and leisure, at least for those with money. Four events in the later C19th led to si­g­nificant chan­ges in how Parisians lived:

3] arrival of the rail­ways by the mid C19th meant French­men could travel anywhere! And the Paris Metro opened in 1900, with the elegant Art Nouveau décor. 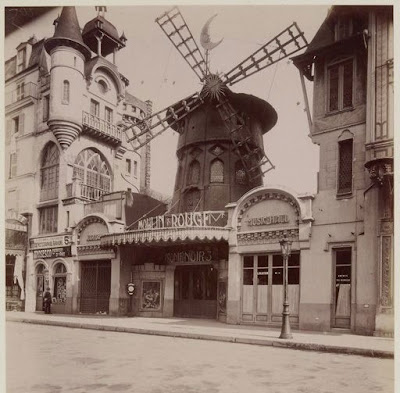 Moulin Rouge, with its windmill vanes
opened in Montmartre in 1889. 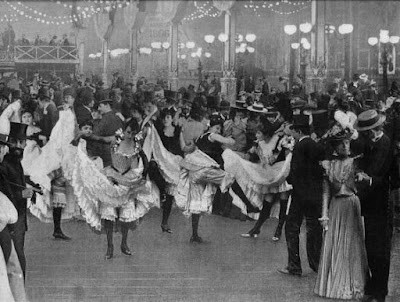 Great galleries and museums were created to display the treas­ures gathered from across Europe, and Paris became the art capital of the world. The Bohem­ians favoured the Left Bank; impr­es­sionism was largely based on the love these artists had for their Paris social.

It was the Mont­mar­t­re dist­rict in particular that became imp­ortant during the Belle Epoch. Once a quiet rural district outside Pa­r­is, Mon­t­mar­t­re was opened up to easy access during Haussmann's mod­er­n­is­ation. Artists and writers flocked there.

Nightlife and cab­arets thrived. Folies Bergère was the first music hall to op­en, in May 1869. In the early days the prod­uctions consisted of circus acts and sporty en­tert­ain­ers. Folies Berg­ere saw itself as the theatre of the ordinary people, offering unres­erved seats for a modest cost.

Young ladies in revues began to appear al­most naked as early as 1893, initially the result of a comp­et­it­ion be­tween art­ist's models concerning which of them had the best legs. Later the entire cast wore elaborate, skimpy cos­t­umes.

At night the Montmartre district started humming: soon night clubs opened for business all over the district. The Chat Noir Cabaret opened in 1881, attracting poets, singers and painters with Boh­emian entertainment and decor.

The original Moulin Rouge was co-founded in 1889 by impresario Jos­eph Oller, who also owned the Paris Olympia, and his supp­ort­ing showman Charles Zidler. Moulin Rouge's architecture was modelled on a mill at the foot of Mt Montmartre, on the very site of an old work­ing windmill. In Oct 1889 it opened as a dance-music hall, with cabaret. The il­l­umin­ated wind­mill vanes became a land­mark, ro­tating above roof tops on Bou­levard de Clichy. Moulin Rouge featured a big dance floor, mirrored walls and a fash­ionable ga­­l­l­ery, lit by round, moun­ted glass gas lamps.

Early cancan dancers had been men, peacocking through a quad­rille in ? defiance of France’s July Monarchy (1830-48). Women gradually joined in, and in 1867 the cancan dancer Finette imported the dance to Lond­on, where her high kicks inspired Kate Vaughan, first of the celebrated Gaiety Girls. They performed in black tights and foaming lacy petticoats over their flesh. Soon celeb­rated exponents like La Goulue and Jane Avril carried the cancan to a sexier show at the Folies Bergère and later in Moulin Rouge. 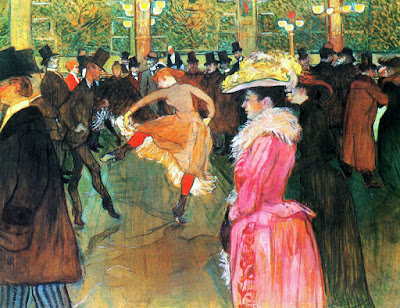 At the Moulin Rouge: The Dance, by Toulouse Lautrec, 1890
Some male patrons wanted to share the entertainment with the dancers.
Philadelphia Museum of Art

Jules Cheret (1836-1932)’s training as a litho­grapher raised the pos­t­er to soph­ist­ic­ated heights. His Folies Berg­ere post­ers showed how simple the design was and how dominant the colour block was. Pierre Bonnard (1867-1947) began design­ing posters in the early 1890s. For Bonnard, Moulin Rouge was an ideal place for insp­iration; he used sober palette, refined, detailed composition in his paintings.

Henri de Toulouse-Lautrec (1864-1901) was an integral part of Paris nightlife. He documented the city’s bohemian night life in the 18­80s & 1890s, frequenting the Moulin Rouge and other Mo­nt­mar­tre cabarets where he attracted a large group of ar­t­ists and intel­l­ectuals. He sat at a crowded nightclub table, drinking and sketching. The next morning in his studio he’d expand the sket­ches into full paintings. Lively posters by Lautrec thrilled the cabar­ets and music halls owners.

Because the Moulin Rouge closed for the summer, the same ow­n­ers opened a summer branch. Called Jardin de Paris, this second business offered dan­ce acts, songs, sket­ches and a ball in a outdoorsy, tree lined atmosphere. At the Chat Noir, He­nri Riv­iëre and Georges Fragerolle designed Shadow Theatre wh­ich consisted of si­l­hou­ettes cut out of zinc, manip­ulated in front of a screen and lit by back lighting. Shadow Theatre product­ions appar­ently had a profound influence on Lautrec's work.

The most famous tune associated with the cancan was written by Jac­q­ues Offenbach for his operetta Orpheus in the Underworld in 1858. The dance was originally titled the Infernal Galop and was first done by act­ors performing as the bawdy Olymp­ian gods and Orpheus’ be­loved Eurydice. He off­ered a brill­iant view of how Paris­ian society and its wealthy visit­ors lived the high life, especially when Orpheus and cancan later became synonymous.

It is said that Par­is was a seductive Babylon; that the can­can loosened the morals of an entire generation. Clearly British men couldn’t get to Paris fa­st enough!! But would Moulin Rouge and the cancan have been famous, if it wasn’t for artists like Toulouse-Lautrec and Offen­bach? Yes! 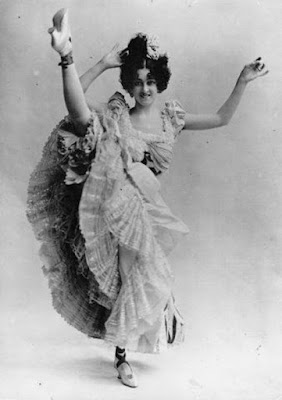 Cancan dancer. Was she wearing knickers under the petticoats?

After all Moulin Rouge patrons adored the ladies’ skin and undies, wild music etc. But would we know about Moulin Rouge today, 120 years later, if it wasn’t for the permanent art, literature and music? Possibly not.

The building burned in 1915 and was rebuilt in 1925. Today the Moulin Rouge is a musical and dance tourist attraction; the club's decor still embodies fin de siècle Paris.

No wonder there were so many panting young Englishmen visiting the Moulin Rouge. Censorship in public performances at home vs blatant sexuality in Paris.

Hello Hels, A while ago you recommended the book The Hare with Amber Eyes. The part of the book that takes place in fin de siècle Paris ties in with this post perfectly while giving another viewpoint. It especially introduces the element of Japonisme, and how it influenced 'modern' artists and private citizens alike, while also introducing the collection of Japanese netsuke that drives the story.
--Jim

I forgot to mention the changing legislations on public performances in Paris. They were relaxed in 1867, for example, allowing costumes and dialogue in places other than formal theatres. And alcohol was soon allowed in musical halls etc.

It is easy to imagine single young British men flooding into Paris, in groups, to see the petticoats and legs :)

I remembered the influence of Japonisme on Paris and Vienna, but I forgot when Edmund de Waal's relative acquired the netsukes. Perfect timing - 1870s and 1880s.

Infernal Galop was the perfect name for that very well known music.

Thats better Hels . I was in Paris a year ago and was surprised at how small the Moulin Rouge is .It would be interesting to know the back ground of the dancers . were they women of the night or were they dancers who just performed to the best of their ability . I have a friend who was a dancer at The Follies in the 1980s . He remembers very hard work and a lot of discipline . He now works as a news agent .

right! Unless we know Orpheus in the Underworld, the operetta by Jacques Offenbach, probably none of us would have ever heard the name The Infernal Galop. This work emerged in 1858, perhaps the first classical full-length operetta ever, yet it became huge from cancan only later.

Sometimes a theme emerges in one context and later changes to another.

It is so interesting that dancers were originally males; I am guessing because if women danced, the church and politicians would have hated their wiggles and risqué underwear. In fact men some men even toured Europe as dancing stars, and made a living doing it.

But women displayed the real Bohemian feeling, the colour and the exotic nature of the dances better than men. The women were experienced dancers, but the nightclubs and cabarets gave them a new freedom to perform to wider audiences.

I had not heard of the Jardin de Paris before.

This is certainly a more uplifting post than "Can a lonely butcher become a mass murderer?"!
(On which I have just commented).
There is something appealing about La Belle Epoque, which still lingers today when we think of Gay Paree! Fragonard's The Swing would have been an earlier pointer to those naughty Parisennes....
CLICK HERE for Bazza’s meretricious Blog ‘To Discover Ice’

Wild music, frantic dancers, enthusiastic audiences sound like a lot of booze to me. The temperance movement must have been horrified by the belle epoque.

In October 1889, the Moulin Rouge opened in the Jardin de Paris, at the foot of the Montmartre hill. From the photo (https://www.pinterest.com.au/pin/290622982173822333/) it looked more suitable for a hot summer outing, and more woman-friendly.

La Belle Epoque is usually dated from after the disastrous Franco-Prussian War (ended 1871) until the even more disastrous start of WW1 (1914). It was a nostalgic era, looking back to a period of learning, science, elegance and art, so rococo images like Fragonard's The Swing (1767) must have been very pretty, peaceful and appealing.

In 1852, when the medical discoverer of alcoholism, Magnus Huss, was being honoured by the Academie franqaise, he wrote that wrote that "France has many drunkards, but happily, no alcoholics." But that was seen to change during the Belle Epoque. The development of alcoholism was seen to come with the abrogation of the laws controlling the establishment of drinking cabarets and cafes, so that after 1880 it was possible for anyone to open a such a place simply by going to the police station and filling out the necessary forms.

we are born when and where we are born, and have no say in the matter. But if I had my druthers, I think I would have chosen Paris during La Belle Epoque!