I know that ceramics from the later 17th century and all the 18th century are greatly prized by Chinese collectors, for their technical skills and often coloured decoration. The best work came from the three great Qing Dynasty emperors, Kangxi (ruled 1661-1722), Yongzheng (1722-35) and Qianlong (1735-96).

The Yongzheng Emperor (1678–1735) was the 5th emperor of the Manchu-led Qing dynasty, reigning for 13 years. According to the National Palace Museum in Taiwan the Yongzheng Emperor promulgated an order in 1727 for court objects that had to differ in appearance from those outside, thus establish­ing a unique style for his court. The painted enamel motifs that Yongzheng loved were blue landscapes, landscapes with flowers, peacocks and wild goose, plums, orchids, bamboo and chrys­anthemums. The exquisite under-glaze blue wares made in Yongzheng’s imperial kilns are some the best creations of the entire Qing era.

In 2009 the Taiwan museum borrowed 37 relics from the Palace Museum in Beijing for its exhibition on Qing Dynasty Emperor Yongzheng. The pieces included an imperial stone seal and a massive Yongzheng portrait. 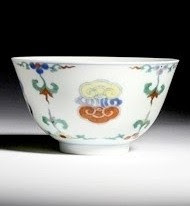 Recently a ceramic object from the Yongzheng dynasty, in the Woolley and Wallis catalogue from their Salisbury Sales of May 2015, caught my attention. A 10.4 cm Yongzheng doucai lingzhi wine bowl had a gently flaring body was delicately decorated with four pairs of ruyi-heads separated by florets extending to leafy tendrils. All the exterior decoration was contained within concentric bands, while the interior was glazed white.

Two references for Qing porcelain are very useful. Firstly consider For the Imperial Court: Qing Porcelain from the Percival David Foundation of Chinese Art, written by Rosemary E Scott and pub­lished in 1997. Secondly Imperial Perfection: The Palace Porcel­ain of Three Chinese Emperors: Kangxi, Yongzheng and Qianlong, published in 2004, is valuable.

An unexpected find was 9 cm tall teapot, decorated with a bright blue pattern featuring two cranes under a palm tree on one side, and a man on a bridge on the other side. When found in 2016 in Britain, the teapot was already missing a lid, and the handle was repaired.

Woolley and Wallis in Salisbury identified it as the work of John Bartlam, a Staffordshire potter who left Britain in 1763 for South Carolina, drawn by its plentiful supplies of local kaolin and its wealthy consumers. He established the first known manufacturer of porcelain in the USA. British apprais­ers said this was the only known Bartlam American teapot in existence, and thus earliest USA-made porcelain teapot to survive. 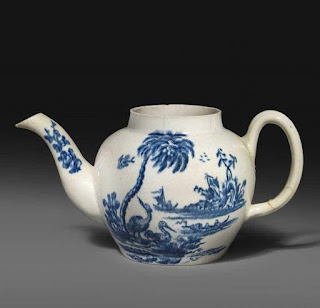 Interest in the teapot unexpectedly skyrocketed, thanks in particular to strong engagement from American bidders, and the post sold for a hammer price plus fees of US$800,000. The Metropolitan Museum of Art in New York won the auction and will house the unique teapot in their collection.

Woolley and Wallis Auctioneers said the vessel’s historic imp­ortance rested in its association with the beginning of Amer­ic­an porcelain product­ion. Because of era of manufacture, the pot was said to represent the unique entrepreneurial spirit and important historical era, before the Boston Tea Party of Dec 1773. Thus this art object meant so much more to the Americans than it did to the other buyers.

It's difficult to separate the price an item sold for from it's true worth or value. The items shown in this post seem to have been in very great demand - by at least two people anyway! However there is something about the first item that says "rare quality" all over it.
CLICK HERE for Bazza’s unkempt Blog ‘To Discover Ice’

I found a pair of famille-rose peach bowls with the marks of Yongzheng at Sotheby's Hong Kong a couple of years ago. The catalogue stated they were created by the imperial kilns to celebrate an imperial birthday, in a palette inspired by Jesuit technology. The bowls are deeply anchored in Chinese history and represent a zenith of aesthetic and technological achievement of court art in China. The peach design is seen on other porcelain vessels of the Yongzheng period.

I have been to many antiques auctions in adult life, mainly for gold and silver art, porcelain and occasionally paintings. And I agree with you that it is difficult to separate the final auction price from the object's true value. But mostly when an auction catalogue says a particular lot will sell for $5,000, that is what Christie's or Sotheby's honestly expects, on the basis of previous experience. When that particular lot sells for $750,000 instead, someone is being fooled or making a large error.

By the way, when I sold my own art objects at Christie's or Sotheby's, they NEVER went above the experts' suggested sale price :)

ok I found famille-rose peach bowls made during the Yongzheng reign; they are beautiful. But why would Chinese potters use a palette inspired by European Jesuit technology?

I am guessing that famille-rose enamels were first introduced in the late 1720s, on Yongzheng period export wares. France was loving its emerging rococo fashion, and although they bought up shiploads of Chinese products, European importers increasingly admired a European flavour to the decoration.

Hello Hels, I hope that you can come one day to the Palace Museum is Taiwan, whose collection of Chinese ceramics is beyond belief. Even their permanent displays are amazing, but they often have special exhibits such as the one you mentioned. I have seen wonderful exhibits of doucai and wucai cups and other ceramics; you really need to witness many world-class specimens to see where cups like the one you illustrate fit in and why they are so important.

My own special fascination is for the somewhat earlier ceramics from the Northern Song Dynasty, such as the Guan Yao, Ru yao, Jun Yao, and so forth. Their examples of these are absolutely mesmerizing (and we haven't even gotten to their collection of CHinese paintings)!
--Jim

P.S. If it were my money, I might have bought the American teapot. The Yong Zheng cup is magnificent, but after all one of a large group; the Bartlam teapot is unique and of deep historic interest.

before I studied history and art history at Melbourne Uni, the focus was entirely on the fine arts - European and British Empire paintings, sculpture and architecture. By the time I got there, they were radical enough to include the decorative arts, but again only from Europe and the British Empire.

I wouldn't have even known what kaolin was, had it not been "discovered" by Johann Friedrich Bottger in Meissen in c1708. I knew samples of kaolin were first sent to Europe by a French Jesuit missionary to show how the Chinese manufactured porcelain, but didn't know about the Chinese industry in its own right *sigh*

wow I wish I could find an item like that !! What was so interesting to me was the cooperation between Taipei and Beijing museums . Good to see.

no museum or gallery could EVER have all the cultural objects it wants, even if they have government support and generous patrons. So we have to rely on distant sites to lend their treasures to our closest gallery. It is a very brave thing to do... who buys the hefty insurance while the objects are travelling both ways? and who provides the guards for the borrowed objects while they are on the ground?

The National Gallery of Victoria's 2018 winter extravaganza will present "MoMA at NGV: 130 Years of Modern and Contemporary Art" i.e 200 key works tracing the development of art and design. I wonder what the insurance cost is for borrowing 200 important works.