Let me quote from the excellent Napoleon’s Last Stand paper, written by historian Jean-Noel Bregeon.  Arthur Wellesley, the Duke of Wellington, skilfully managed to expel Emperor Napoleon from Portugal in 1811 and won decisive victories against the French in Spain in 1813. After the French Grand Army’s ruinous attempt to invade Russia, Allied forces invaded France from all sides in 1813.

The French Empire was weakening, damaging the Emperor’s plans for European domination. By April 1814 it looked as if the anti-French Allies had succeeded. Napoleon abdicated and was exiled to the Italian island of Elba; Bourbon King Louis XVIII was restored to power instead.

Napoleon was not a prisoner on Elba; he was granted sov­er­eignty of the island plus an armed guard. A flow of intell­igence from French informants & letters helped him secretly plan for his future. Even from Elba, Napoleon knew the Bourbon government was unpopular and by May 1814, he expected he would be sent for... to "tranquilise" France.

Then in Feb 1815, Europe received a shock: the audacious Nap­ol­­eon escaped from Elba and sailed for France. It is hard to over­-estimate the horror this news provoked. Many nations feared that Napol­eon’s escape would restart French imperial expansion, and re-plunge Europe into war.

In spring 1815 British, Prussian, Austrian and Russian forces re-­grouped as Napoleon again mobilised the French army. A last, epic showdown loomed. This time Nap­oleon faced a coalition of nations led by his old skilled adversary, the Duke of Wellington.

In March, Napoleon reached Paris with the applause of the masses in his ears. Despite his claims to want peace, the Allies were wary. Together they signed what amounted to a declaration of war.

Events moved swiftly, and the restored French emperor had little time to organise. With enemy armies massing on France’s northern frontiers, he tried to organise a vol­un­teer force to supplement the standing army. Even so, the French army was a fearful opponent. Its troops were ex­perienced fighters, and its commander still inspired passionate loyalty. 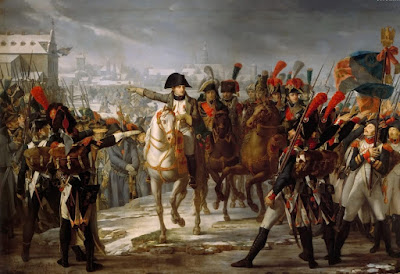 Napoleon’s Return to France, painted by Charles Steuben in  1818.
Wiki

The Allied forces consisted of British, Prussian and other troops who were divided into detachments. British command­er, the Duke of Wellington, patiently decided to wait for the enemy to attack rather than force their hand.

Brimming with confidence, Napoleon was planning for a decisive victory. Ignoring advice to postpone engagement with the enemy, he left Paris on 12th June 1815 to join his army in Belgium where Welling­ton’s and Gebhard von Blücher’s troops lay in wait. On 14th June Napoleon proclaimed: “The honour and happiness of our country are at stake; Frenchmen, the moment has arrived when we must conqueror or die!”

A double battle took place on 16th June in Quatre-Bras and Ligny; both were French victories, although neither was a fatal blow to Napoleon’s enemies. On 17th June, heavy rains soaked the ground and the French soldiers. The wet fields and muddy roads became a swampy mess.

At dawn on 18th June, Wellington and Napoleon organised their for­c­es. Wellington set up his headquarters in Mont-Saint-Jean, not far from Waterloo. He had de­ployed most of his 68,000 troops along a long ridge with three farms. The British commander stuck to his def­ensive tactic, knowing he needed to wait for Blücher’s detachments (c50,000 men) to arrive. After the clash at Ligny, Blücher with­drew to Wavre, closer to Waterloo.

Napoleon’s camp was in the village of Maison du Roi. Because Fren­ch forces totalled c72,000 men, Napoleon hoped to take advantage of the distance between the Prussians and the British, to quickly destroy Well­ington’s forces. The emperor believed that victory was within his grasp! But the emperor’s plan was thwarted by the mud and fog, which prevented an early start. Nap­oleon believed that had it not rained, he would have quickly de­feated the Allied army, before the Prussians arrived.

But none of the French attacks breached the front. The Allied infantry, especially the British, showed determined resil­ience in facing the French onslaught. As a result, some formations suffered unpreced­ented losses e.g the Inniskilling Regiment lost two-thirds of its men in 45 minutes.

The strain was becoming intolerable on Wellington. He desperately awaited news of Blücher’s arrival so that the Prussians could save them. At 4 PM Blücher’s forces started to attack the French flanks but the danger for Well­ington was not over yet. One farmhouse fell to the French at 6 PM. An hour later, the allied forces faced the terrifying charge from the Imperial Guard, the force Napol­eon always reserved to decide bat­tles. The Emperor thought the Imperial Guard would break the Allies, but he miscalculated. He had to send several regiments of his Imperial Guard to fight the Prussians, men who were sorely missed by their comrades during the final push. As they charged, Allied gunfire ripped them apart. The Imperial Guard faltered and the French troops scattered in terror-filled retreat. 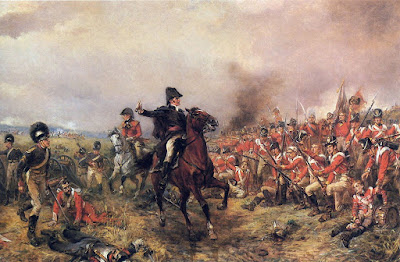 At 8:15 PM Napoleon ordered a retreat, once he realised the mortal blow had been struck. But the Allies’ victory came at a heavy cost. Historians estim­ated Wellington’s casualties c15,000 and Blücher’s at c8,000. Napoleon suffered c25,000 casualties and 9,000 Frenchmen were captured. Wellington was overwhelmed by the loss of life.

Napoleon immediately returned to Paris where he abdicated in favour of his son on 22th June. A month after the battle, Napoleon gave himself up to the British, who banished him to St Helena, a mid-Atlantic island. The Napoleonic Era was over for good.

Yet... yet....whilst on Elba, Napoleon knew the Bourbon government was unpopular and that he would have to save France. So why, despite solid advice to postpone the battle, did Napoleon take full command of an unnecessary bat­t­le, stating that he could easily defeat the inept British soldiers and the remote Prussian soldiers?

We can acknowledge that the French under Marshal Michel Ney event­ually captured a farmhouse in the Allied area and began decimating Wellington’s troops with artillery. But why was Napoleon so pre­occupied with the 30,000 Prussians attacking his flank that he did not release troops to aid Ney’s attack until later? By that time, Wellington had reorganised the British def­ences, and the French at­tack was repulsed. Fifteen minutes later, the allied army launched a general advance and the Prussians att­acked in the east, throwing the French troops into chaotic retreat.

After the great 1812 cockup, when Napoleon’s Grande Armée was wiped out on the tragic retreat from Moscow, I am not sure if France was really desperate for him to return home again, or not. Hundreds of thousands of young French men froze to death in the snow.

Hello Hels, You emphasize the carnage of the battle, but imagine if it had taken place with the advanced weapons developed in the next few decades in France, particularly the Minie rifle ball.

By the way, the Western Reserve Historical Society had a large collection of Napoleona, which it shockingly sold to raise operating funds for $1.2 million, not seemingly very much when you consider the high prices paid for individual rare items, and the impossibility of buying it back.
--Jim

I was interested to see what happened to Louis XVIII. It seems he fled again when Napoleon returned only to return once more. The French monarchy seems to have taken a long time to die!
The story of Waterloo, Wellington and Napoleon looms large in British history. I think 'Bonie' is still regarded as a hero in France.
CLICK HERE for Bazza’s ridiculous Blog ‘To Discover Ice’

The French Grand Armee was the largest European military force ever mobilised! Napoleon arrived in Moscow in June 1812, intending to find supplies and get a surrender from the Russians but neither came. Faced with a tragic Russian winter, Napoleon was forced to order his starving army out of Moscow.

Starving and freezing, the French retreat became a rout at the hands of an aggressive and brave Russian army, and by Dec 1812 Napoleon left what remained of his army to return to Paris. A week later, the remnants of the Grande Armée finally escaped Russia, having lost more than 400,000 young soldiers!!

But did the French citizens' sense of patriotism and emotion really forgive Napoleon in the long run? Or did Napoleon's unlimited hubris fed on the adulation he said was displayed towards him by the French people and press?

I understand that the Ohio Society was in debt and had to offload its treasures, but they acted unforgivably re the _secret_ selling off of paintings, books and relics associated with Napoleon Bonaparte. Worse still, the treasures went to private collectors and, as you say, will never be seen by the public again :(

There are at least 8 wonderful public Napoleonic museums in the world... why didn't the Ohio directors negotiate with one or more of these institutions? Or with the French government?

During the French Revolution and under the rule of Napoleon, Louis lived in exile all over Europe. This made perfect sense. But the next few years did not.

When Napoleon lived on Elba, King Louis XVIII took his rightful position on the French throne for nearly a year. And when Napoleon escaped from Elba, King Louis was confident he would cope with the pesky ex-Emperor. He could not! In March 1815, Louis XVIII fled France and did not return to the French throne until Napoleon was defeated by Wellington and Blücher in Waterloo in June 1815.

A fascinating read, the ebb & flow of things seeming unpredictable from where I'm sitting.
Yes, I'm sure both leaders were masters of strategy, but still, luck seems a major player.

anyone who reads history finds that each topic is changeable. The victors write the initial version of an event, then decades later it is re-written in a more nuanced or informed way. Think of Charles Dodgson/Lewis Carroll. First he was an amazing writer who was a supportive "uncle" to many little girls. Then he was a fantasy writer who emotionally damaged little girls in real life. Now he is a great writer again, but the little girls' parents should have looked after their daughters more closely.

I feel the same way about Napoleon, the love (or otherwise) of his own French citizens and the fear (or otherwise) of other nations in Europe. The journal article "What if Napoleon Bonaparte had won the Battle of Waterloo?" was quite interesting:
http://www.historyisnowmagazine.com/blog/2015/3/19/what-if-napoleon-bonaparte-had-won-the-battle-of-waterloo#.WqHU-ehuaM8=

I would like to create a link with the excellent blog post called "Napoleon II, Son of Napoleon I and Marie Louise, Duchess of Parma" in "Geri Walton, unique histories".
https://www.geriwalton.com/napoleon-ii-son-napoleon-marie-louise-duchess-parma/

My question would be: why did Napoleon immediately return to Paris where he abdicated in favour of his son? He must have known that the new child Emperor was a toddler and that the five-member commission that took power did not summon Napoleon II. Thus, Napoleon II and his mother were likely unaware he had been proclaimed Emperor and served for a fortnight, before the Allies restored King Louis XVIII to the throne.