Thomas Guthrie was born in Arbroath Scotland in 1803, 12th child of his father David, a merchant and banker. The young Thomas went to Edinburgh University at 12 where he studied as a divinity student, then studied surgery and anatomy. In 1829 Guthrie was appointed to a parish where he intro­duced classes for young people every Sabbath. He also started a village library.

In 1837, Guthrie became minister at the Old Greyfriars Kirk in Edinburgh where he saw at first hand the ragged children who lived by begging and stealing. Presumably he knew of Sheriff Watson in Aberdeen who had formed his Industrial Feeding School in 1841. Guthrie converted a room beneath the church as a kitchen and he soon had his first class going. Within a year he had started three Ragged Schools in Edinburgh! In his 1847 pamphlet Plea for Ragged Schools, Rev Guthrie described a unique curriculum - education, meals, clothes, industrial training and Christian instruction. Pupils learned cobbling, tailoring and cooking. And by doing jobs for local shops, the children could earn a small wage and learn its value. The effect was to clear the streets and prisons of young beggars.

Ragged Schools provided free education for children too poor to re­ceive it elsewhere but they were not pretty. Charles Dickens thought a particular London Ragged School was the most wretched place he’d ever seen. By 1841 c2 million people lived in London, but with­out compulsory schooling only a fract­ion of them had attended school. The Empire was expanding, but much of London was still impoverished. 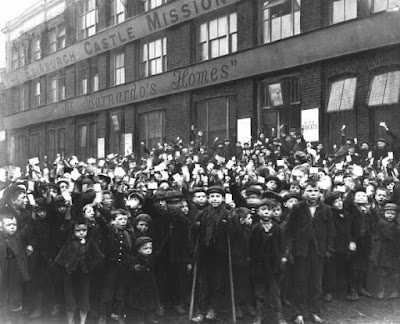 The London City Mission was founded in 1835 by Scottish missionary David Nasmith and his colleagues to bring free education and Christ­ian good to London’s children. In 1840 the Mission received finan­cial and political support from the ref­or­mer Anthony Ashley-Cooper, 7th Earl of Shaftsbury. Reports were from the Children’s Employment Commission were read in Parliament­, detailing the horror of child labour in Brit­ain: low pay, long hours & dangerous work conditions exper­ienced by child­ren working in mines and collieries.

Field Lane Ragged School opened in 1842. The school consisted of two or three miserable rooms where ragged, filthy chil­dren huddled together on a bench. Not to be trusted with books, the pupils were taught orally by a voluntary teacher. By the 1850s Field Lane consisted of a day school, which taught reading, writing, counting and the Bible; two night schools, one for vagrant adults and another for boys who were employed during the day. There were classes in shoe-making and tailoring for boys, and sewing classes for girls. Field Lane also fed and clothed its students, ran a night refuge and a weekend Bible school. Evangelical Christianity was at the heart of Ragged schooling!

In 1844 the Ragged School Union was founded as a movement of in­div­idual schools, sustained by charity or government grants. In under a decade, 300+ free schools for poor children were estab­lished in Britain. London, Aberdeen, Dundee and Edinburgh of course, but Manchester, Liverpool and other cities became equally important.

There was criticism. Dickens thought the movement was not secular enough.

In 1850 journalist Henry Mayhew noted ongoing juvenile delinqu­ency. In his 1851 report, London Labour and the London Poor, Mayhew noted the Mudlarks who traipsed along the banks of the Thames looking for coal, copper and rope scraps to sell. Few of these children had been to church or school. Indeed, due to their acts of petty theft brought about by hunger, they were often in prison.

Many poor families believed the classes on offer were irrelevant, so the Ragged School Union began to establish Brigades for boys in 1857. These groups provided certified jobs in street vending or shoe shining, with a proportion of the boys’ earnings being placed in a personal bank account. The police approved. 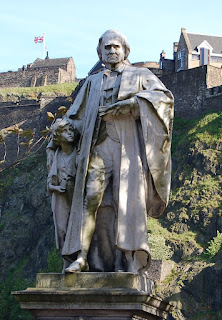 Were the Ragged Schools popular among the poorest in society? In the Ragged School Union’s Annual Report for 1857, only 21,500 out of London’s half a million children had attended their lessons. Eventually Parliament agreed that Ragged schooling alone would not solve the problems. The introduction of univ­ersal, compulsory schooling in London under the 1870 Education Act finally arrived.

The Jews' Free School in Spitalfields, in London’s East End, taught c20,000 pupils between 1856-1907. By 1900, the school had 4,250: it was the largest school in Europe. .Since my grand­moth­er lived in Whitechapel, sharing the two rooms with the 12 other people in her impoverished family, I must invest­igate her Jews’ Free School detailed records. Grandma went on to become a singer/dancer in the three Yiddish Theatres AND in the English-speaking pantomimes. So for at least my family, the Free School did a great job. 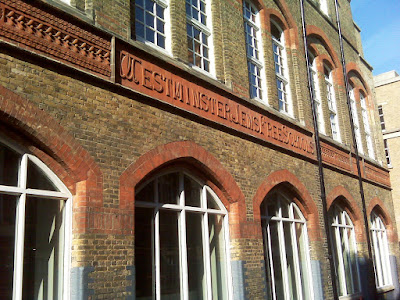 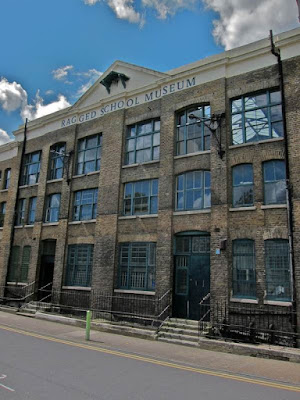 When Thomas Barnardo left Dublin for London in 1866, intending to be a doctor/missionary in China, he found a city where disease was rife, overcrowding were endemic, and educational opport­unities for the poor were still inadequate. Thousands of children had to sleep on the streets and others were forced to beg after being maimed in factories. Worse still was the cholera epidemic that swept through the East End, leaving 3,000 Londoners dead.

He gave up his medical training to pursue his local missionary and philanthropy works and in 1867 opened his first ragged school, Copperfield Road School in the London Borough of Tower Hamlets. Copperfield Road School (and his other properties in the East End) educated tens of thousands of chil­­dren over the years. It only closed in 1908 when enough gov­ern­ment schools were available to serve the loc­al famil­ies (although the Factory Girls’ Club lasted until 1916). Was this the last Ragged School to close?


A group of 3 canal-side buildings once formed the largest ragged school in London, Barnardo’s. These 3 buildings later went through a variety of industrial uses until they were threatened with demolition in the early 1980s. Local people joined together to save them and The Ragged School Museum opened in 1990. Visitors can see lessons taught in an auth­entic Victorian classroom; and they can inpsect the recreated Victorian kitchen with no electricity or running water.

Excellent post! Though it's easy (and wrong) to view history through the lens of the present, poverty in 19th - and 20th - century Britain was shameful. Could it have been avoided? The development of education is interesting - and still ongoing, of course! Thought-provoking stuff.

Until her recent retirement my wife Leah worked at Barnardo's World Headquarters which is now in north-east London, a ten minute walk from our home. A girl's village was established there in 1876. The cottages and village green are now a protected historical site. Schools and education were certainly a major area of concern.
CLICK HERE for Bazza’s histrionic Blog ‘To Discover Ice’

Proper education for all has changed society and especially equalised society, in Australia at least. A good education for children and an educated society reigns in the excesses of dictators and despots.

It's ironical that the some of the best Aboriginal activists for their 'stolen generation' were themselves stolen and because of their excellent mission education, they became great speakers and communicators.

Universal compulsory schooling, fully government funded, took a while coming. But other countries took even longer.

PS: I took my Sunday morning walking group past the Westminster Jews Free School recently ("Jewish Fitzrovia and Soho"). It is a protected building and in very good condition. I think it's residential now.

Avoided? Initially, probably not. Poverty in a rapidly industrialising nation was inevitable as the owners of wealth became wealthier and the workers were more exploited than ever. It took brave, communally-minded people to set up voluntary, alternative and non-government funded education systems for the bottom rungs of big city populations.

I would love to talk to you two about Barnardo's and the girls' village. Was it just a residential orphanage? or did it have educational and training goals for the girls?

a proper education also helps keep young people out of unemployment, crime and dire poverty. But even in Australia, with our more equalised society, it took time for there to be education acts passed that established public school systems - free, compulsory and secular. The Victorian Education Act of 1872 was my pride and joy.

that is so true. I am assuming that even if schooling was compulsory from age 6, too many impoverished families depended on their young children working for money or stealing food. Nonetheless Prussia takes credit for starting compulsory education for its young children, then Austria and other countries taken over by Napoleon.

Even now, some countries don't require their children do be educated in a proper school. Presumably home would do. And many countries still have lesser standards for girls.

I knew nothing about the Brady Street Club for Working Boys. Apparently it was found necessary in 1901 to establish an industrial school for young Jewish boys who might be led into criminal activities.

hello, what an interesting pot . My grandfather in law went to the Jewish free school to and lived with his large family in The Exchange Buildings in Cutler street Houndsditch. Interestingly the building was the sight of the 1910 Houndsditch murders by some Marxist extremists of a policeman . I was thrilled to bits when I found an obscure paperback book about this incident, which actually had plans of the houses which made up the Exchange buildings . I didn't know that the records of the school were available . How are they accessed?

For the records of the Jews' Free School in Spitalfields, start with The National Archives:
http://discovery.nationalarchives.gov.uk/details/r/9e843ba6-2211-4a7a-bf42-00032e0d8a2d


And I found two of my paternal grandmother's brothers in
http://sassienie.com/archivelinks/jfs.pdf

Barnardo's Village certainly had a school, church and hospital of it's own on the site. As far as I am aware the girls were mainly taught to be "in service" at that time.
I don't believe there was a connection between the two Jewish schools you mentioned apart from the obvious ones.
Your picture captioned 'Jews Free School, Spitalfields' is actually the one in Hanway Place just off Oxford Street in Central London.
Incidentally we went to dinner last night with a friend from Sydney who until last year was the President of WIZO Australia!
CLICK HERE for Bazza’s querulous Blog ‘To Discover Ice’

thank you. I changed the label until the Jews' Free School straight away.

Now I have to examine the history of Barnardo's Village.

many countries still have lesser standards for girls.

regardless of what is written in various nations' educational legislation, I bet you are 100% correct. Legislation is one thing; practice may be quite another.

For fantastic photos from the Ragged School Museum in Copperfield Rd London, see the blog Spitalfields Life at http://spitalfieldslife.com/2018/02/06/at-the-ragged-school-museum-x/