In 1968 I saw Daniel Cohn-Bendit on tv and decided straight away who I would marry. The man of my dreams would have to be a red-head, Jewish, European-born and educated, politically left wing and a great Bridge player. In 1969, I met my now-husband Joe who was a red-head, Jewish, European and great at Bridge. Only in politics could Joe have been more active – much more active!

Now let us look at 1968, as described by David Del Testa* and Sean O’Hagan*. Paris was the place where political action and utopian fantasy came together in the most spectacular fashion. The 1968 protesters initially comprised a few student activists at the Nanterre University in Paris. Protests began against the lack of facilities on their bleak suburban campus. Extraordinarily, the auth­or­ities called the French riot police to quell the small demonstration, and suddenly politicised students joined the rebels.

They had a leader, Daniel Cohn-Bendit (b1945). Born in Monat­uban in southern France, he was the son of German cit­iz­ens who had fled the Nazi machine before WW2 started. He moved to Germany with his par­ents in 1958 and attended high school near Frankfurt. Cohn-Bendit took out German citizenship, then return­ed to France in 1966 to study sociology at the Nanterre University.

Cohn-Bendit was soon called Danny the Red by the media, a reference to his ginger hair as much as his politics. Cohn-Bendit's grin and non-dogmatic radicalism made him the antithesis of dour theoretical Marxists.

After another sit-in at Nanterre, they closed the university and ordered Cohn-Bendit to appear before a discip­linary board. Thus the pro­tests shifted to the centre of Paris where media crews were already assembling to cover the imminent Vietnam peace talks. The students were now becoming an embarr­assment to President De Gaulle. He sent police into the Sorbonne to arrest 600 students and ordered the university’s closure. 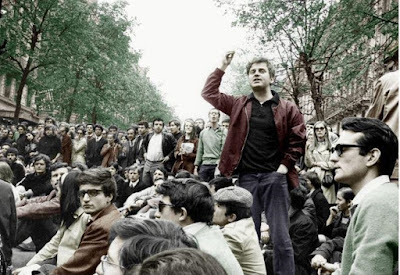 It ended in near-revolution. The government banned all demonst­rat­ions in May when Cohn-Bendit was due to be disciplined. Yet 1,000 students accompanied their leader to the Sorbonne, where they passed through French riot police armed with shields and clubs. The media followed.

The police charged, leaving students unconscious on the cobbled street. The students regrouped and fought back around the Sorbonne, overturning cars and building barricades for hours. These were people who knew nothing of revol­ut­ion; there was no organisation, no planning.

As news of the uprising spread, young people from all over Paris arrived to support the students. Petrol bombs and Molotov cocktails lit up the streets as night fell. 600+ protesters were injured in one day and about half as many police. The rioting continued for another week and images of the clashes with police were everywhere.

On the streets of Paris in those few weeks, people from different back­grounds came out in support of the students. Groups of Parisians gathered around the barricades to organise and agitate. Posters appeared across the Left Bank and beyond. The two main Parisian art schools combined to form the Atelier Populaire, producing hundreds of silk-screened images in an impressive outpouring of polit­ical graph­ic art. The real 1968 represented liberation and a sense of community. Order and authority were challenged.

Cohn-Bendit, who would soon receive a deport­ation order from the French government for his involvement, had gone from "local student activist" to "in­­ternational figurehead for revolution". In just three weeks Danny the Red was famous all over the world. And in my heart.

The catalyst for Danny the Red’s fame in 1968 was TV. Two tech­nological innovations transformed news broadcasts: a] use of cheap, reusable videotape, instead of film; and b] same-day broadcasts. While the Left argued over the meaning of the unrest, Cohn-Bendit did not care about its meaning. But he did care that images of rebellion were quickly disseminated. 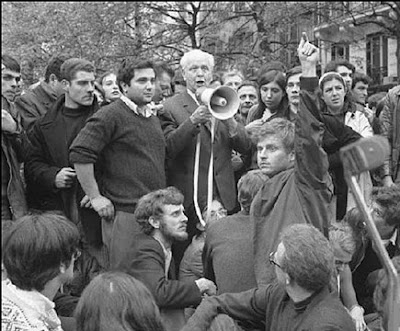 Cohn-Bendit asks for silence, so poet Louis Aragon can talk to students on a megaphone
Photo credit: Blind Flaneur

Anti-Vietnam War protests
Images of frantic battles in the Vietnam war were quickly broadcast to the USA, a nation who were not used to seeing their soldiers killing civ­il­ians. The carpet bombing, napalm and American massacres of Vietnamese families shocked, then angered viewers. In late 1967-1968, c30 colleges a month were protesting with sit-ins and street marches.

In Germany a strong anti-Vietnam war movement had grown on campuses in 1967. By April 1968, highly organised rioting started in Berlin, following the attempted assassination of left-winger Rudi Dutschke. Stud­ents and activists directed their ire at the right-wing Springer Press organisation in Berlin, laying siege.

In Poland the government closed down eight university departments in Warsaw, and imprisoned 1,000 students after protests against state censorship. In Italy the University of Rome was shut down for two weeks after violent demonstrations against police brutality. In Spain students marched against the Fascist regime of General Franco, so he closed Madrid University for a month. In Brasil protesters were killed during marches against the mil­itary junta. In France, just as the Nanterre protests gathered momentum, thousands marched against the war in Paris. Then 10,000 German protesters gathered in West Berlin. Worst of all, Soviet troops rumbled into Czechoslovakia, abruptly ending the brief Prague spring of reforms.

By then, the spirit of 1968 had dimmed in France, too. To the aston­ish­ment of both students and government, the French trade unions had called for a general strike for more pay and better conditions. France ground to a halt to the horror of the beleaguered President De Gaulle. It looked as if France would undergo another revolution, but the unlikely alliance of students and workers did not last. Cohn-Bendit himself admitted that the workers and the students were never properly together.

After the May Riots, Cohn-Bendit’s political opponents took advan­tage of his German passport and had him expelled from France as a seditious alien. He became active in Frankfurt instead.

That youthful unplanned idealism, carried for a while by a surprising momentum, quickly faded. 1968 ended with De Gaulle still in power, President Nixon was now president and the Vietnam war escalating. In Mexico hundreds of young people in the student movement were slaughtered by the Olympic Battalion in Tlatelolco Square in Oct 1968.

The youth revolution might have been over, but 1968 remained the epicentre mod­ern protest and the dawn of a new geopolitical order. It was also the beginning of the many strug­gles that followed, especially Women's Liber­ation. Cohn-Bendit, hero of May 1968, is now a Green Party leader in the European parliament.

I suppose that, in many ways, 1968 can be compared to 1848 - the year of revolutions. It seems that the French in particular have always taken to the streets at the drop of a hat. In the UK we have always been slower to protest so vehemently. I have heard university professors say that today's crop of students are not nearly rebellious enough even though there are certainly enough issues worth shouting about!
Daniel Cohn-Bendit is quite low-profile here now but he has been very successful in European Green Party politics.
CLICK HERE for Bazza’s ruminative Blog ‘To Discover Ice’

The late 60s were a time of constant marches and sit ins, at least in the USA and Australia. What surprised me, back in the day, was that the French and German students took longer to get going. Cohn-Bendit and his colleagues quickly became heroes to students here, and anti-heroes to our government.

I wonder if UK students were less rebellious because they had no burning issues to protest...
or because they were polite, middle class adolescents who respected the police etc

agreed. Everyone has halcyon days in their lives. They may only last 5 years but for most people, those 5 years are special - we meet boyfriends and girlfriends, get our own car, shock our parents and participate in every political/social cause that seems urgent. For people worried about Vietnam War, conscription, universal health care, women's reproductive rights etc, 1968 was unbeatable.

Hello Hels, In the U.S., protests, especially over the Vietnam War, certainly continued past 1968, culminating with the Kent State protests and shootings in 1970. When I read books about colleges during this period, student unrest is the number one concern, and the colleges seem to see themselves through the mirror of the war and protest environment.
--Jim

depending on which literature you read, student unrest was the number one "concern" in the late 1960s-early 1970s OR it was the "most inspirational and moral response" to the evil war. I don't go on sit ins-these days, but my political values and behaviours are still derived from a] parents and grandparents and b] my undergrad life at uni 1967-70.

Very interesting . So the Paris protest was just against the conservative dominant paradigm?
The Parisians are certainly pretty volatile . I remember about 10 years ago I was at Gare Du Norde and waiting for a train . It was mid summer so quite hot and there were all these para troopers around with their semi automatics . We were wondering what was going on only to discover that riots were on the cards as the trains running in one direction out of Paris were being stopped due to fires on and near the tracks thus making it difficult fro people to get home . I was amazed that this called fro semi automatics !!!! It interesting how different cultures are in times of stress and crisis. In London that situation would have been met with lots of swearing and bad jokes on twitter , in Melbourne a shrug and a trip back to the pub for a cold beer .

Sorry, Hels! I didn't mean to sound like someone writing a paper for class. You are right--history should be vibrant, personal and alive. This is very true for Clevlanders, just a short hop from Kent State, where those events form 1970 are still very much alive and continue to inspire people.
--Jim
P.S. Did you know that the documents and records from the Kent State protests are now at Yale University? There was some reason that the judges wanted them moved out of the State of Ohio. Yale even has the guns that were used in the massacre (note that I didn't say "event")!

how things change! In 1970 the Governor sent one thousand guardmen to keep order at Kent State University, and had them armed to the teeth. Ohio National Guardsmen used their rifles and bayonets, killing four students on the campus. Another nine students lay shot, but survived.

In Paris, there are plenty of photos of Daniel Cohn-Bendit grinning at cops, perhaps making fun of them but not at all fearful of them.

In Melbourne I am sure the police had batons back in 1970, but as long as they kept out of the way, no-one minded.

correct - Kent State devastated the entire world. The four students were 20 years old in 1970, only a bit younger than everyone I knew. Plus Miller, Krause and Scheuer were Jews, so the synagogues here all held memorial prayer sessions each evening.

Hopefully those hideous events from 1970 ARE still very much alive. We took it all very personally and still do, but I suspect younger generations may not have ever heard much about Vietnam and Cambodia, conscription or Kent State.

Thank goodness all the documents and records from Kent State have been protected - I always feared that murders were covered up or the truth was only partially released.

where those events form 1970 are still very much alive and continue to inspire people.

I suspect that the era we are discussing (late 1960s-early 1970s) was the ultimate period in community development and generosity of spirit. So I am not sure now, 47 years later, if younger generations are still inspired by Danny the Red and his brave contemporaries.