A River Runs Through It - a moving American book and film

Both the book and film A River Runs Through It were set in Missoula Montana. The Maclean brothers, Norman 1902-90 (Craig Sheffer) and Paul 1906–38 (Brad Pitt), lived a rural life in the fresh air of Montana, spending much of their childhood running wherever they liked. The sons of a stoic Scot­tish Presbyterian minister (Tom Skerritt) and stoic wife (Blenda Blethyn), the boys eventually separated when well behaved Norman moved east to attend college. When Norman finally returned after 6 years away, the siblings resumed family life again.

Maclean grew up in the western Rocky Mountains in the first decades of the C20th. As a young man, he worked many summers in logging camps and for the United States Forest Service. Jessie 1931–1968 (Emily Lloyd) eventually became Norman's pretty and energetic wife in 1931. 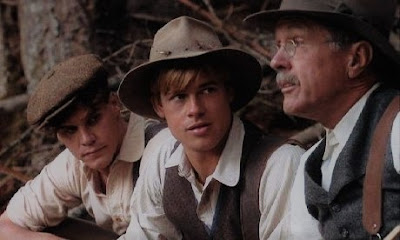 Norman and Paul Maclean, and their father Rev Maclean
in the film A River Runs Through It.

The book, 1976
According to Rev Maclean, fishing provided spiritual education to men. And the natural world really did form an essential motif in the novel, symbolising spiritual power and healing fellow­ship. If you liked Robert Ebert’s view, fishing stood for Life in this film - the river, fish and the natural world were God's gifts to use wisely. I preferred to think that fly fishing stood for Male Bond­ing, esp­ecially where males were not verbally skilled or emotionally open.

A student of Norman Maclean,  Andrew Rosenheim, explained that after deciding to become a lecturer of English literature at the Univ­ersity of Chicago instead of a forest ranger, Norman bonded with his students. They’d walk in the Palos Park Pre­serve in Chicago, sharing literary conversations. But Norman had published almost nothing through­out his career. When his wife Jessie died, Norman was lonely, volatile and drunk. Then his children suggested he recreate their old bedtime stories of Montana.

Thus these Montana stories were written long after Maclean retired. The book, published by Chicago UP in 1976, soon sold very well. At 70 Maclean produced what became a classic C20th American novel.

In the book Paul Maclean was shown to be a talented fly fishermen. I agree with Rosenheim that the spectacle of man engaged with nature was not usually pretty, but Norman managed to show the extraordinary grace of his otherwise messy brother waist deep in the cold, surging waters of the Black­foot River.

Redford's film was set in the inter-war era. Serious Nor­man learned to write in to his father's study every morning. The good reverend sent his son back to rewrite the work, until it was correct. Young brother Paul didn’t seem to be burd­en­ed by study, so each afternoon they ran around the countryside tog­ether. A cute young man who drank and gambled too much, Paul was happy stay­ing in Montana all of his life, working for a newspaper. Norman want­ed to lecture in liter­at­ure in a big city university, far from Montana.

The cinematography reflected the natural, lush beauty of the Western states in the early C20th and the towns still looked Victorian. As the boys grew up, they did the shimmy with young flappers and plan­ned their futures. Paul’s rebelliousness was shown in his closeness to a young Indian girl, in defiance of town opinion.

Director Robert Redford said the two boys understood that Rev Maclean's lessons and sermons asked the congregants to behave well. The manual labour was hard, the drinkers and prostitutes cunning, the bushfires dangerous, the public racist and the climate untrust­worthy. But no matter what life brought, they should wade into the uncertain stream and greet events with courage and honesty.

The rural metaphors were not accidental! It was the tale of a male-dominated family in Montana, unable to ever fully express their love for each other in words or hugs. The mother was almost silent, busy making tasty food. The men were much louder and sporty, showing their familial bonds in the outdoors. And learning discipline.

Some of the men in the story looked hopeless. His brother-in-law Neal who was far worse than Paul – drunk, drugged, rude, self centred and a consummate liar. Paul and Neal’s mothers certainly loved their troubled sons, so it was difficult for the viewers to watch these men fall apart. Sometimes there was humour, but it was a sad humour.

Norman was unable to help his brother with gambling debts and alcoholism. The next May, Paul was beaten to death by a revolver handle in a drunken brawl. The whole family was devast­ated but given Paul’s history, no one was shocked. 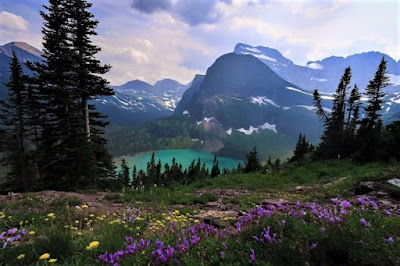 Montana landscape
shown in the film

Many years ago I decided to never see a film first and then read the subsequent book second. Even if the film was well done, a film can never recreate the original author’s motivations and insights. It is not that I didn’t enjoy the film A River Runs Through It; I did! But I would have hated to not fully appreciate Maclean’s vision first.

Dan’s Reviews said that this was one of the most significant books in his life. It spoke to a subterranean level of spirituality that he believed all people possess, but men find nearly impossible to express. I would not use the word spirituality, but I agree the book addressed men’s yearning in a subtle, emotional way. Few films could manage that.

And another thing. I normally do not enjoy the use of the first person narrating books and films. The characters and events tend to be seen exclus­ive­ly through the eyes of the narrator, reducing the world. This film chronicled their intertwin­ing and often conflicting lives, focusing only on Norman's perspective. However Maclean won my heart at the beginning: “In our family, there was no clear line between religion and fly fishing.”

Personal narratives are only useful when viewers/readers can share them. Older brother Norman was constantly filled with a frustrating sense of helplessness concerning his loved baby brother and with his unloved brother in law. I understood totally ☹

Paul was arrested for drunken­ness and brawling more than once, and the family knew he had large gambling debts. Norman tried to intervene, failing every time. Then in 1938 Paul was found murdered, his body dumped in a bar’s alley. Decades later the elderly Norman Maclean still needed to under­stand the tragedy of his brother’s death, to honour him, and to thank the late Reverend for his fatherly wisdom.

I was thinking of And Quiet Flows the Don. Did the American author know of Sholokhov's book?

Apart from the book titles, the two novels seem to have a lot in common. Social values, family structures and illicit sexual relations were examined in both rural regions, at a time of WW1 and after. The landscape and river are central in both books.

But did MacLean read And Quiet Flows The Don? I would love to know.

I always thought that this was going to be a bit 'girly' for me. Looks like I might have made a mistake! Another book came to mind while reading this post but it's gone now. If I remember I'll come back.....
CLICK HERE for Bazza’s fecund Blog ‘To Discover Ice’

we must talk about forgetting, once we get to A Certain Age. There is nothing to be ashamed about... it happens to us all. Writing things down seems to be helpful.

I find that my long term memory is still excellent i.e from the post-war period until 31/12/1970. From then on, it became a bit dodgy *sigh*

At a 70th birthday lunch in my favourite coffee shop this week, a very familiar woman came up to the table to say hello to everyone. Then left. The 8 of us didn't remember her name, so we shared clues for a few minutes: "she used to play tennis in the local tournaments", "her brother married Bessie from Sydney", "her daughter was in my son's year at school", "her husband was a surgeon but he has retired now", "you know.....". Finally one person came up with her first name, then a second person remembered the surname quickly *sigh*.

Yes, that sounds so familiar. It's a different part of the brain that stores short-term memory whereas long-term is stored in various other locations (all over the place) and organised by the hippocampus - sorry, I studied psychology within my degree!
So we have a valid excuse for this problem.
CLICK HERE for Bazza’s flippant Blog ‘To Discover Ice’

re the book being a bit too girly, I am guessing you meant too focused on emotional issues. That reminds me of another point to raise about the film. Although Brenda Blethyn is a wonderful actress, she (Mrs Maclean) had very few lines to remember in the entire film and very little screen time. I would have felt very lonely in that rural, male-dominated family.

Hello Hels, Re the book vs. movie versions, perhaps the desire to pursue the visual metaphor of the river, fishing and nature overcame the idea of following the book more closely, especially in an age when urban settings are blamed for every family dysfunction. I am not too familiar with this story, but perhaps am getting the same vibes as Bazza. I will check the book out in the library before buying it to see if it is my type of story.
--Jim

Thank you. Because the river and the surrounding mountainous landscape were so central to the boys' young lives, I agree that the film was always going to be gorgeous to look at.

The director, Robert Redford, was delighted when he read the book. The canoeing and fly fishing bonded the Maclean brothers, their father and their male friends, so the cinematography was both easy to create and exciting to watch. Rural Montana might have been a boring place for ambitious young men to leave as quickly as possible, but it was the ideal location for this film.