British children of the Raj. Where was home - India or UK?

Last Children of the Raj: British Childhoods in India was edited by Laurence Fleming and published by Radcliffe Press in 2004.  This book is a collection of retrospective reminiscences contributed by people late in their lives, the 120+ story tellers having all spent most of their childhood and adolescence in British India, the Princely States or Burma. The most evocative stories were the personal accounts of powerful em­otional experiences while growing up in India - the sights, smells and sounds of India, their homes, families, staff, schools and holidays.

The book was presented in two volumes, perfect for history bloggers who tend to read only one chapter at a time. The first volume (1919-39) was org­anised by geog­raphic regions of India and grouped all of the stories of the child­ren by those areas. The second volume (1939-50) was arranged chronol­og­ically, covering WW2 and soon after. Most of the contributors’ stories were split up and were divided into a few sections. An index would have made it possible to go back and forward, within each individual’s story. 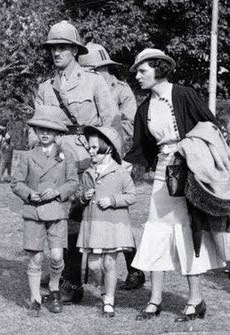 These children’s fathers were railway engineers and other prof­es­s­ionals, army officers, teachers, members of the Indian Civil Serv­ice, plant­ation owners and businessmen. In India during the last 30 years or so of British rule, the fathers' careers were important since they were the very men who were there to develop and modernise India.

Plus the fathers’ careers meant the children grew up in a society even more stratified than Britain by income and occupation. Inevitably these children grew up with the nice houses, good schools and plenty of household staff that were the distinctive features of life in British India. A comfortable life-style, but one unprotected from epidemics, vicious heat, mos­quitoes, snakes and wild animals. [I was not coddled as a child, but one sight of a scorpion in my bedroom would have got me into a ship home, the NEXT morning].

Unless forbidden to do so by their English-speaking nannies, many of the contributors in this book had spoken Indian languages as child­ren. Since picking up Indian languages from doting servants, some children spoke English almost as a second language.

These children, born in 1914-40, provided a social history during the last decades of the British Raj that occurred during a hectic era: world war, self-rule movements and the violent birth of independent India and Pakistan. Nonetheless these privileged children of the Raj remembered an exciting and exotic child­hood. Still we have to ask: did they fully acknowledge being a part of expat­riate life in both countries – an expat in India and in the UK? Where was “home”? 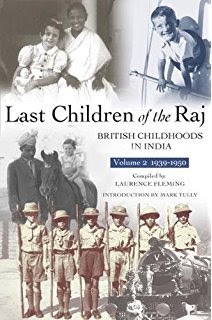 Last Children of the Raj book

One of the most disruptive experiences described was that of being sent home on long, lonely trips to Britain at an early age… for a Prop­er Ed­ucation. Perhaps we can understand why it was so important for most British families in India to send their young children, espec­ially boys, home to Britain, given that formal education was crit­ical for their futures. But it broke my heart reading how they had to be sent home alone, or occasionally with their mothers. They boarded at school during term, and with grandmothers or aunts during school holidays. They might have seen their mothers once a year and their fathers even less frequently.

Separation from family was a dominant theme, even for those children sent to distant schools within India’s hill stations eg Simla. Those children who went to boarding schools in the hill stations were taught together with Anglo-Indians and Euro­peans born in India. At least those educated in India were only separated from their fam­il­ies for 10 months each year. But it came at a price. The children who stayed in Indian schools would not have had access to the lessons and examinations that groomed lads towards the best car­eer paths.

When WW2 erupted in 1939, many children who were in school in Brit­ain were recalled to India, moving into temporarily-created schools in India. In 1940, in one convoy the P&O troopship Stratheden carried at least 200 child­ren back to India. Dangerous to be sure, but at least the parents got their sons and daughters safely by their sides. As WW2 went on, the older sons joined up as officers in the British and Indian armies.

Many suffered emotional traumas; children of the Raj had needs and feelings of their own that were not being listened to! But according to the stories in the book, most children adapted to their predicament - this was a cost of Empire and of keeping the fam­ily in its approp­riate class position. Even more, the Raj made them proud to be British; history had given them a special role in the world.

Upon retirement, Raj families had to face a reduced income and im­portant decisions about where to live out the rest of their days. I felt very sad for those families, even though I never lived in any colonial service. Losing the one home a family had lived in for a generation ..was always tragic.

Of course the Raj was about rule, not about power sharing. So Ind­ians could only serve the Raj as servants or friends; Indians could never be central to the events in their own nation. For as long as the Indians were not governing their own country, they could only show their true feelings within the various independence movements. So the alternative name of the book, Orphans of the Imperial Dream, probably reflected the times better.

I have not seen Elizabeth Buettner's Empire Families (2004), and Margaret MacMillan’s Women of the Raj: The Mothers, Wives and Daughters of the British Empire in India (2007) but they seem to touch many of the same themes found in the Fleming book.

Very cliquey, I believe at times and Victorian manners held on in India for longer. Yes, many who served in or profited from India were honourable and believed in what they did. It must have been sad for them when they left. A few 'stayed on', post independence. Also difficult for Anglo Indians who stayed and who had somewhat of a protected status and good jobs, which they gradually lost as they were no longer deemed to be any better than full Indians. The Raj, ever fascinating.

India was the jewel in the imperial crown for a very long time, but not necessarily to the benefit of the Indians. Or to British families, apparently.

Hello Hels, Today people talk about the multi-national, multi-cultural upbringing of children, but this post reminds us that this is not a new situation. Even in the U.S. there were scores of diplomats and explorers who raised children all over the world, giving them a viewpoint that was unique before this current era. One recalls Emma Eames, the singer, whose childhood was spent in China, although nothing exotic seems to remain behind her cool demeanor.

Fleming's book would be interesting to consult to see how adding a new British layer to India's caste system affected those children brought up under its privilege.
--Jim

agreed. People who served in or profited from India really were honourable and really did believe in what they did; they were serving king and country at the highest level possible. After all, British men were building all the structures that a modern country needed - trading facilities, courts, universities and government structures.

Although the children felt they had comfortable, privileged and happy childhoods, it seems the children (and wives) paid quite a price for the men's important careers.

Some years ago I gave what I thought was a balanced semester of lectures on the history of India under British control. We discussed the importance of English language, the provision of quality railway systems, cricket, universal health care, bridge building etc etc. Then we examined how the British looted India's wealth, suppressed moves to independence, claimed the costs of the English army from the Indian tax base, permanently changed India's agricultural practices etc etc.

Many of my students were shocked that the Raj did not entirely, or largely, benefit Indians. In high school they had learned a very different history of the Raj.

We all know of three groups of families who moved from country to country, every 5 years or so: a] Christian missionaries,
b] workers in foreign diplomatic services and
c] military staff.

I met a lot of the children of such families who returned home for secondary education in boarding schools, while their parents remained abroad. It must have been as lonely a life for those children, as it had been for the children of the Raj.

"Adding a new British layer to India's caste system"? :) I don't think the British children of the Raj would have known enough of the real Indian world to understand the concept.

It leads to the question... should the British have been there at all?

That is certainly a question that historians should be asking! The passion for empire in Britain was not a political or military function initially, but grew with the success of commercial interests. Only once the trading interests demanded government intervention did Britain's military and legislative powers have to catch up. [This was true for the other imperialist powers, as well].

I am assuming that if Laurence Fleming had found a way of interviewing earlier generations of Children of the Raj, he would have been uncovering very different family experiences in India.

Re your comment back to Joseph. Firstly I am surprised that Australian secondary students even learnt about The Raj. Secondly, did they ever consider why the British were in India? While there were British missionaries in India, rather a lot I think, do students not work out the basic reason for British interest in India? Yes, for profit. Pure and simple.

my students are mature age and definitely studied history of the British Empire, as it used to be. The old history text books are full of the importance of imperialism and its role in making India modern. While the emphasis was certainly on trade, there was a great deal of discussion about a proper justice system eg ending child marriages and the burning of young widows on their husbands' funeral pyres etc.

I don't think the British children of the Raj would have known enough of the real Indian world to understand the concept.

Agreed. That is why the historian's task is so important.