Harold Holt (1908–1967) completed high school in Melbourne and a law degree at Melbourne University. Holt worked as a solicitor, and pursued his interests in sport and politics. He won a seat in parliament in 1935 for the conservatives, and first became a minister at  the young age of 30!

Harold Holt had met Zara Dickins when he was a student. Unable to persuade Holt to marry before his income grew, she departed on a round-the-world cruise to England where Zara met & married British army officer James Fell in 1935. For the next four years they lived in India and had a son. After the birth in 1939 of her twins, she lived in Melbourne.

Because the family all knew the twins were Holt’s sons, the Fells were amicably divorced in 1946. In Oct that same year, she married Harold Holt, now a well established solicitor and Parliamentarian. Is it an exag­geration to say that he was already being touted as a future leader of the conservatives? Certainly he had well placed friends, including Sir Norman and Lady Mabel Brookes, and Robert Menzies, then Victoria’s Attorney-General.

In opposition from 1941-49, Robert Menzies was elected prime minister in 1949 and young Harold Holt became a high profile member of his cabinet. Holt held senior port­folios during the next 16 years of the Menzies government including Minister for: Immigrat­ion, Labour and National Service, The Melbourne Olympics and finally Treasurer. Holt was ready for the prime ministership in 1960, but he had a long wait. Menzies did not retire until 1966! 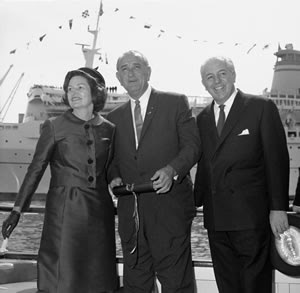 Channel 9 News wrote the definitive analysis of these events. It was a very hot day in Dec 1967 when the Prime Minister Harold Holt went for a swim, and vanished. A fit, keen swimmer and spear fisherman, he loved the rough waters off Victoria's Cheviot Beach behind Portsea, off Victoria’s Port Phillip Bay.

Holt's former Press Secretary and close personal friend, Tony Eggle­ton, remembered it was a very hot afternoon in Canberra when a phone call from a journalist came. There was a report of a VIP missing at Portsea. Eggleton phoned the Prime Minister’s Lodge, and the housekeeper at Holt's holiday home at Portsea, but noone knew anything. Finally he phoned the police in Melbourne who said they did believe that the missing person in the water was the Prime Minister.

Someone had to tell Harold's wife, Zara, who they tracked her down at a Christmas Party in Canberra. Soon Zara and Eggleton flew to Mel­b­ourne where police were lined up, providing them with a fast escort on the 200 ks journey to Portsea.

By this time the news that the PM was missing became public. Hor­des of people on the Mornington Peninsula headed to the beach or lined the streets. All the media were waiting outside the army bar­racks. Zara was escort­ed down to the search zone, accompanied by her three adult sons.

Police divers, who leaped into the waters scouring the area for any sign of the Prime Minister, were joined by helicopters. Regular media conferences kept Australian and the world updated on the search. The search continued for 20 days but even by Day 2, everyone concluded that the tides had carried Holt out into the open ocean.

As the mystery deepened, another story emer­ged: that the PM had been at the beach with his lover Marjorie Gillespie. Mrs Gillespie later told the police that she looked back, wishing Harold would come out of the water. The water suddenly became turb­ul­ent around him and  swamped him. She did not see him again and even Holt’s two personal body guards could add no useful information. 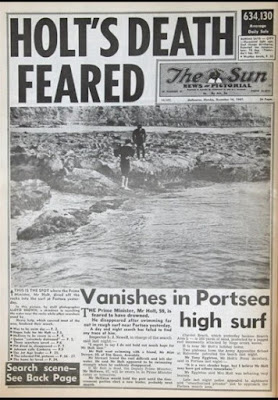 Front page coverage in every newspaper
The Sun, 18th Dec 1967

According to the newspapers later, Holt was Australia's answer to John F Kennedy during the sexually permissive 1960s. Both men were spirited, charming, adventurous and handsome. Strangely, the PM's staff said they had never been aware of Holt’s affairs but Zara said she was very clear her husband was a womaniser. Nonetheless, she said, it was love that kept the Holts together. They had a nice holiday home in Queensland, and hoped to eventually retire there.

Because the disappearance was a tragedy Australia had never seen, conspiracy theories were rampant. Many people thought Holt was whisked away by a Chinese submarine near Cheviot Beach and had become a Communist spy. Others suggested that, at the height of the Red Scare, he'd been spotted in Russia as a defector. And there were many dark rumours of suicide.

Note that I have added pub­lished histories about Zara’s pregnancies and Harold’s many mistresses, in case there was a personal (as opposed to a political) element to the PM’s death. Note that  Channel 9 News did not mention any personal misbehaviour by the prime minister or his wife.

Holt had been Prime Minister for less than two years when he van­ished. He had campaigned for election on the basis of the Vietnam War, proudly declaring to his American allies that Australia was a staunch friend that would Go All The Way With L.B.J. It was a phrase that would go down in history. And Holt had formed a close personal friendship with Lyndon Baines Johnson.

Holt led Australia out of imperial measurements and into decimal currency. Plus he held one of the most historic referenda in Aust­ral­ia's history, guaranteeing Aboriginal Australians the right to vote. Most importantly he abolished the White Australia policy. The one thing the prime minister wanted to do (but died before he achiev­ed it) was to visit European capital cities; he’d show that South-East Asia & the Pacific were going to be The Powerhouse Of The Future.

Holt's memorial service in Melbourne in Jan 1968 was an honour roll of world political leaders and heads of state. Soon after Zara left for a two-month world trip, during which time she lunched with the Queen at Sandringham and stayed with the Lyndon Johnsons at the White House. Her autobiography, My Life and Harry, was launched in 1968 and she was created a dame that same year. In February 1969 Dame Zara married another federal politician, Jeff Bate. 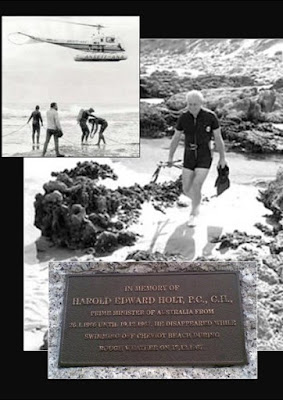 38 years after the disappearance a coroner finally ended all conspiracy theories in 2005, declaring that although his body was never found, Harold Holt probably drowned. A memorial plaque now lies on the sea floor in Cheviot Beach.

All the way with LBJ...no wonder Holt disappeared.

Wow! Fifty years ago - that makes me feel very old because I remember it well. And, of course, in 1974 our own British MP, John Stonehouse, faked his personal 'disappearance' from a beach and then turned up with his girlfriend in Australia. I wonder if he was inspired by Holt's tragic death? It is well-known that David Nobbs created Reginald Perrin by inspiration from Stonehouse's case.
I think 'LSK', above, may be being a little unfair to LBJ. He was a good President!
CLICK HERE for Bazza’s sagacious Blog ‘To Discover Ice’

I can remember my maternal grandparents being horrified at Zara marrying Bate just one year after Holt died.

The compulsory National Service for 20-year-old males was introduced under the National Service Act in 1964, before Harold Holt became prime minister. But it probably wasn't until Holt became PM that domestic opposition to the Vietnam War and conscription reached fever pitch. I am assuming that you went into the conscription barrel and I am assuming our birthday was not one of the ones drawn out. Ditto my husband and brother, thank goodness. But my parents and parents in law were ready to tear Holt and Johnson apart.

a pattern is emerging. After Lord Richard Bingham, 7th Earl of Lucan disappeared from Britain in 1974, he was spotted on the beaches of Australia with young women, none of whom was his wife.

so correct! Harold Holt (presumably) drowned 17th Dec 1967 and Dame Zara married Federal MP Jeff Bate 19th Feb 1969. Even if they loathed previous spouses, most widows and widowers would keep up the mourning for a year, even if it was just for appearance sake.

But there was another issue. Jeff Bate was a farmer. The sight of him in wellies and cow muck was not a good look.

Hello Hels, I am not much of a believer in conspiracy theories, especially when a drowning verdict so obviously fits the circumstances. America has had its share of mysterious disappearances, among the most notable being the cantankerous writer Ambrose Bierce, and the notorious Judge Crater.
--Jim

That is a long time . I remember it well . What is also shocking is that he was the same age I am now . I had always thought he was so old !!!! I didn't know about Dame Zara's so called misdemeanors but was aware that Harold was a bit of a colorful character.

With the corrupt Judge Joseph Crater, it seemed that most intelligent people assumed he got out of the way of the law (or an enemy) and was just one step ahead of whoever was looking for him. Wise man!

50 years!!!! I was at a wedding that Sunday afternoon and even though noone had mobile phones back then, the news got around quickly. As soon as the ceremony was over, everyone got into their cars to listen to their car radios.

Holt was certainly a colourful character, a man who preferred the company of women in bathing suits. So we are unlikely to believe the following reason for his death that I read in a newspaper. "Holt was murdered, because he was opposed to American bases such as Pine Gap being built on Australian soil".

Hi again, The Judge Crater legend probably never penetrated as far as Australia, but even now he has not been forgotten by some writers and comics. He keeps turning up in the oddest places. When the astronauts landed on the moon, there was a cartoon showing them radioing back to NASA, "We've found Judge Crater!" and another cartoon showed a scientist looking through a microscope and announcing, "I've discovered Judge Crater!" And so forth.
--Jim

a significant person who "disappears" and cannot be found, is certain to go into popular culture. Great Train Robber (Aug 1963) Ronnie Biggs escaped from gaol in the UK and lived an ordinary life in Paris, Sydney, Adelaide and mostly Melbourne with his wife and children, under a fake name and with plastic surgery on his face. When the Australian Police were on to him in Oct 1969, he jumped on a ship to Brasil. Biggs married a young Brasilan woman in and had a baby, thus avoiding extradition back to the UK. He sold T-shirts related to the train robbery, gave interviews to journalists and recorded music with The Sex Pistols to survive financially. When the extradition laws between the UK and Brasil changed, Biggs was taken back to his homeland and was gaoled once again.

Ronnie Biggs was not a prime minister or a judge, but he certainly dominated popular culture for decades.

The reason I’m reaching out is because I noticed on that page you specifically mention a former Australian Prime Minister, and I wanted to suggest the addition of a reference link where they are mentioned.

You can find the relevant page located here: https://primeministers.moadoph.gov.au/prime-ministers/harold-holt This site has a lot of historical information and would be a great resource to give context to your readers. I hope you have found this useful.

many thanks for your email. The various prime ministers were very well analysed, particularly that of our favourite Ben Chifley. But what happened between 1949 (#12 Menzies) and 1966 (#17 Harold Holt)? Can we have a note added, referring to Menzies' second term.