Edvard Radzinsky wrote Stalin: The First In-depth Biography in 1997. From the archives, he told the story of Stalin's search for total domination, first within the Communist Party and then across the Soviet Union. He des­cribed young Stal­in's long-denied involve­ment with terrorism; the importance of his behind-the-scenes role during the October Revolution; his often hostile relationship with Lenin; the infamous show trials of the 1930s; his secret dealings with Hitler; and his plans to deport all the Soviet Union's Jewish doctors. Radzinsky also examined Stalin's rough relationship with his suicidal wife Nadezhda. All archive-based but shockingly brutal nontheless!

I wanted to read a more recently published history for a modern, balanced review of Stalin. So here is Stalin’s Cult of Personality: its Origins and Progression (2015) by Julia Kenny. Stalin was born as Josef Vissarionovich Dzhugashvili (1878-1953) in the then-Russian town of Gori, now Georgia. His father was a rough, alcoholic worker who savagely used his fists on young Jos­ef. His mother, soon an impoverished peasant widow, took in washing to feed the children. Worst of all Josef caught smallpox in primary school.

The Geor­g­ian married his first wife Ekaterina Svanidze in 1906, but she died of typhus in 1907. [Their one son, Yakov, later died in Sachsenhausen con­cent­ration camp in 1943]. In 1919 Stalin married his second wife Nad­ezhda Alliluyeva who died by suicide from mental illness in 1932. The son and daughter of the second marriage both survived Daddy Stalin. 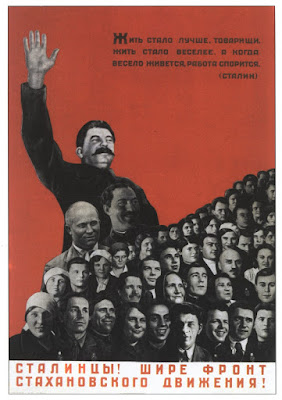 Poster of Stalin "Life is getting better",
1934 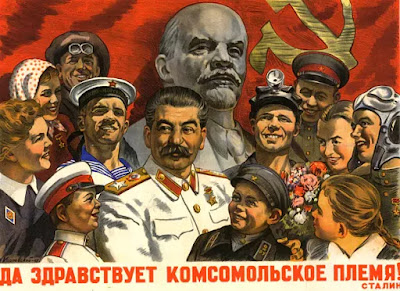 Poster of  Stalin, Lenin and 'Long live the Komsomol generation!'
1948

Though the term “Cult of Personality” was a C19th term, it was re-pop­ul­arised for Stalin’s regime. The term meant the vener­at­ion of one omnipotent, infallible leader, in­grained visually and cultur­ally in society via propaganda! I have used the term many times in history lectures, particularly for power-hungry leaders like the Sun God, King Louis XIV of France.

It was clear that modern Russia already had a history of aut­o­cr­at­ic rule i.e citizens were used to support­ing a strong leader. The 1832 Fundamental Laws made the "Emperor of all the Russias" an ab­sol­ute mon­arch. Sec­ur­ed by the Imper­ial line of succ­es­sion, the Tsar also became the guar­d­­ian and defender of the Orthodox Church. Visually the power of the Tsar was reinforced in architecture eg the Kremlin or Winter Palace.

The very intelligent Vladimir Ilyich Ulyanov/Lenin (1870–1924) enjoyed cult-like status, given that he was the legitimate leader of the Revolution and the found­er of Marxist-Leninism. This status only intensif­ied after Len­in died in Jan 1924. He was embalmed and placed in a Maus­oleum that still stands. Small shrines were placed in factor­ies and villages, design­ed according to guidelines issued by the party in Feb 1924.

Stalin had climbed up party ranks by working his way into Lenin’s inner circle. As Lenin’s right-hand man, he had indeed been app­ointed General Secretary of the Communist party in Apr 1922. Litt­le did Stalin know that, in old age, Lenin had begun compiling a political rec­ord that expres­sed horror of Stalin’s vul­garity and violence. Lenin urged that Stalin be removed from his pos­ition as General Secretary.

Lev Davidovich Bronstein/Leon Trotsky (1879–1940), Stalin’s main political rival, couldn’t attend Lenin’s funeral in 1924. Stalin wanted to emerge as Lenin’s in­heritor, so the Georgian pounced. Trotsky was expelled from the Communist Party (1927), exiled to Kazakhstan (1928) and finally exiled from the Soviet Union. As head of the Fourth International, Trotsky could continue to oppose the Stalinist bureaucracy from exile. But on Stalin's orders, he was assassinated in Mexico.

Because of Lenin’s views, Stalin had to re­write his own past. By portraying himself as the embod­iment of Marxist-Leninism, Stalin could transfer the admiration and trust that Lenin had enjoyed as a leader figure, and could create his own cult. Stalin upheld the core prin­cip­les of Marxist-Leninism: a] a centralised govern­ment and b] the ideology of a class-struggle on both a domestic and global scale. Stalin seemed in tune with the public sentiment.

Before 1932, most Soviet propaganda posters showed Lenin and Stalin together. Then Stalin propaganda was everywhere, program­ming citiz­ens to be­lieving that Stalin was working to achieve per­fect socialism for the nation. There were Stalin icons in every home; marches and parades involv­­ed giant Stalin banners. Cin­em­as dis­played Soviet docum­ent­aries, and Stalinist posters were common­. His prop­aganda served well in masking Stalin’s darker side. 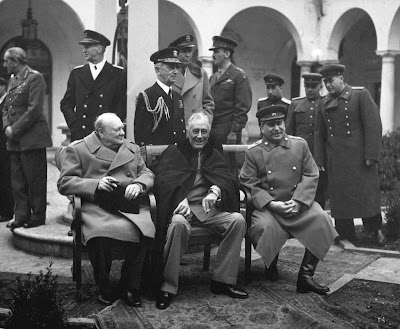 Stalin’s displayed himself as a modest but public figure, mys­tif­ying his private life. He used Lenin’s post-Revolution youth movements, Komsomol and Young Pion­eers, to create a new generation of be­l­ievers. Being part of the Pion­eers was pop­ul­ar and they wore their red scarfs with pride, giv­ing them a sense of social incl­us­ion. The youth movements encouraged children to behave like adult Party Members.

If Stalin had a brutal reputation, why did citizens trust his leader­ship? Citizens did NOT know that during the Great Terror of 1936-8, Stalin ordered hundreds of thousands of exec­ut­ions. As in the French Revol­ution, Russians were under con­st­ant threat of being monitored by the secret police NKVD and arr­est­ed. Stalin also had the power to have party officials arr­est­ed and replaced. And many people were interned in prisons. And the cruel famines in Ukraine were certainly Stalin-controlled.

Mainly they trusted Stalin be­cause his regime generated success! Russian children were learning at good schools, and quality science education was actively promot­ed. Fam­ilies were guaranteed top quality health care. Industrial develop­ment was rapid, un­emp­loyment was rare, and cultural and art fac­ilities were well supported. How ironic that while the capitalist world was ex­per­iencing the Great De­pres­sion and grinding work­ing-class pov­erty, Rus­sia emerged as the second biggest modern industrial nation.

Stalin consolidated his power even more after WW2, with some very fine moments. He recognised that vic­tory over the Nazis had been won by the tragic loss of 27 million Russ­ian lives (and other Allies). And Stalin also played a vital role in the creation of the Jewish state in Israel. At the UN he had his Ambassador Andrei Gromyko give an fervent speech in 1947 on the catastrophe suffered by Europe’s Jews and their need to have a safe haven. Stalin had also organised the Eastern European Communist states to vote unanimously for the creation of Israel.

Even now it is diffic­ult to know how gen­uinely popular Stal­­in was in his own country, because everyone who didn't agree with him became an Enemy of the Peop­le. Thus he remained leader of the Soviet Union until his 1953 death.

At the 1956 Party Congress the next party leader, Nikita Khrush­chev, denounced Josef Stalin in a long speech and demolished his pre­dec­essor’s reputation. He proved that Stalin intended to use the Doct­ors' Trial to launch a massive party purge. Under Khrush­chev, Soviet pros­ecut­ors further investigated the brutality of Stalin's later years.

I also recommend Simon Montefiore’s book Stalin: The Court of the Red Tsar (2012) .

24 May 1940 Trotsky's young grandson, Esteban Volkov, awoke with a jolt. As gunmen sent by Stalin stormed the house, the boy threw himself from his bed and hid in the corner of his bedroom. With bullets flying around his room, Volkov was hit in the foot. Trotsky's guards fought back and the attackers fled.

20 August 1940 have been etched into the memory of Volkov. That was the day that Ramon Mercader, a Stalinist agent of Spanish origin who had infiltrated Trotsky's household, fatally wounded the former Bolshevik leader by striking his head with an ice pick.

We examined the Russian Revolution in Matriculation modern history, but I don't remember Stalin very much. Of course that was awhile back.

I think it was Mad Magazine that once printed a mock front page of Pravda: "Bulganin's speech, see page two, Khrushchev's response, see page three, Bulganin's apology, see page four"!
I think Stalin's tentacles spread through the twentieth century. George Orwell was certainly inspired to create 1984 and Big Brother by him and Kim Jong-un must have learned a thing or two. Looking back from that time, the French revolution must have, in it's own way, inspired Stalin.
CLICK HERE for Bazza’s pervasive Blog ‘To Discover Ice’

thank you. I always assumed Stalin planned to have Trotsky murdered and that Trotsky knew that he was going to die violently at Stalin's hands. But how hideous for the small children.

you are a woman after my own heart - the Year 12 Matriculation Certificate ended in 1969, replaced by the Higher School Certificate in 1970. Thus we are both *cough* elderly.

When Russia entered the First World War, Stalin was in exile in Siberia. So it was when the Revolution started that he returned to St Petersburg and became acting leader of the local Bolsheviks. Only after a couple of years did Stalin start showing off his true ugliness.

I think each dictator is a nightmare in his own particular style. Franco, Idi Amin, Juan Peron, Pol Pot, Kim Jong-un etc might have been inspired by earlier dictators but we haven't seen what Thump will do yet.

I see Trump as an incompetent fantasist rather than evil but time well tell. He could end up being impeached. It's been chaos from day one!

I added Thump's name in the same sentence. Sorry. What I should have typed was that both Stalin and Thump used/use the cult of personality in exactly the same, horrid way. The flags, the ugly scowl, the brutal language, the threatened disappearance of Enemies of the People. And just like Stalin, Thump compares and links himself to earlier presidential stars (Abraham Lincoln and Andrew Jackson).

And not only from Thump own mouth. When Anthony Scaramucci gave his sewer-laden speech about his hated colleague Priebus, Thump was merely extending his cult of personality via another person's mouth. Priebus' importance ended as surely as Trotsky's did.

Would love to know more about Stalin's son dying in Sachsenhausen . How did that happen ?
It interesting to note the similarities between the fathers of both Hitler and Stalin . Both terrible bullies who brutalized their families. I would love to =know more about poor Nadezdah as well . I have a Russian acquaintance who is now in her 70s who doesn't really see anything wrong with the Stalin era . She has photo of her lined up with her siblings in front of their dead youngest sibling and a photo of Stalin in the background . It was a very harsh time fro Russians . I think it is probably hard fro us to relate to . I remember once she was sitting at the table eating some lunch and there was a James Bond movie on TV . Suddenly she stood up outraged and cried out "Bloody Americans" and stormed off to continue the house cleaning . It was a surreal moment .

I have read at least four different explanations for the death of son Yakov Dzhugashvili. Yakov was always thought to have committed suicide in 1943 by electrifying himself on a perimeter fence while being held prisoner in the Sachsenhausen concentration camp in eastern Germany.

But apparently he willingly surrendered to the Germans during the Nazis’ 1941 invasion of the Soviet Union and was not "captured", as Kremlin propaganda had stated. When questioned by his captorsDzhugashvili was both anti-Semitic and highly critical of the Red Army.

After the German army was decisively defeated at the Battle of Stalingrad in 1943, the Nazis offered to exchange Dzhugashvili for some of their own prisoners. But Stalin wanted his hated son to die. Independent, 17th Feb 2013

So you are 100% correct about Stalin being a brutal father (and husband).