In July 1943, the Allies had pushed Italy out of North Africa and subsequently invaded Sicily. The war had been going so bad­­­ly for Italy that a meeting of the Fascist Grand Council, with the support of King Victor Emmanuel III, overthrew and arrested Il Duce Benito Mussolini. One of those who voted against Mussolini was his son-in-law, the foreign min­is­ter Galeazzo Ciano)! The following day, Mussolini was dis­missed by Victor Emmanuel III saying ‘My dear Duce, it’s no longer any good. At this moment you are the most hated man in Italy.’

The Italian Fascists took revenge against the 19 members who had voted against Mussolini: death! Even Ciano was dis­missed from his post by the new anti-Fascist government of Italy after his father–in-law was taken. In Aug 1943 Ciano, Edda and their three children fled to Germany, but the Germans sent them back. Ciano was then arrested for treason, imprisoned, tried and executed. 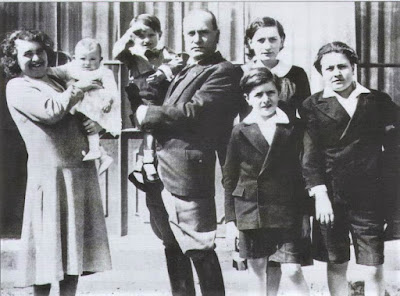 Rachele and Benito Mussolini
and their children, 1930


The new anti-Fascist Italian government, under Marshal Pietro Badoglio, began secret negotiations with the Allied powers and made preparations for Italy's capitulation. When the Armistice of Cassibile was ann­ounced in Sicily on 8th Sept 1943, Italy swapped sides and formally joined the Allies.

Germany was prepared and quickly intervened! Germany seized control of their Operational Zones, freeing Mussolini from his Abruzzo prison and taking him to the German-occupied area to establish a satellite regime. The Germans immediately mobilised some of its best Wehrmacht units to Italy, both to resist new Allied advances from the south and to face the defection of Italy with a brutal venge­ance.

In a last-ditch attempt to rally Fascist Italy, the Germans sent Il Duce and his reformed Repub­lican Fascist Party to Villa Feltrinelli in Gargnano, on the shore of Lake Garda in Lombardy. Here he est­ablished the Italian Social Republic of Salò/RSI, a state centred on Salò where Mussolini and the Ministry of Foreign Affairs now liv­ed and worked. Germany had annexed Trentino, the South Tyrol and much of the northern end of the lake, so the borders of the Reich had advanced and Gargnano was easy to reach and to defend.

The Fascist state was established in Nov 1943, at the same time the National Assembly of the Fascist Party was held in Verona. Villa Feltrinelli was patrolled by thirty SS officers from Hitler’s personal guard, lodged in the cellars beneath the villa. An anti-aircraft cannon was installed on the roof. In the tunnels between Gargnano and Riva del Garda, factories were set up to specialise in the production and repair of weapons and engines for cars and planes. 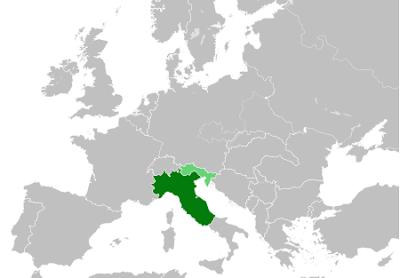 Il Duce was joined by his wife Rachele Guidi (1890-1979), their two youngest children, the in-laws and nephews. Mussolini’s very young mistress-de-jour Claretta Petacci and her parents agreed to accept a neigh­bour­ing house on Lake Garda. [Rachele Mussolini was furious, yet hundreds of love letters between Claretta and her lover still survive].

Although the new Italian Social Republic claimed at least the northern half of Italy and the islands as its own, the republic held little real political control. The RSI had its own army, with 150,000 men, its own flag and currency, but it had no constitution, was fin­ancially dependent on Germany and the choice of ministers in the new RSI government was veto-able by the Germans. The RSI received diplomatic recognition only from Germany, Japan and their puppet states.

Once the anti-Fascist Italian government had declared war on Germ­any, a disastrous civil war broke out between those Italians who stuck with the Central Powers (in the north including Rome) and those Italians who sided with the Allies (in the south). In March 1944 the Italian resis­tance exploded a bomb in Rome that killed 33 German soldiers. Retaliation was swift and brutal – for each German soldier killed, Hitler ordered the execution of ten Italian civil­ians. 335 civilians were immediately shot in a hideous retribution called the Ardeatine Massacre. When Muss­olini met Hitler in April 1944, the Italian protests were totally ignored.

In late April 1945, Mussolini's republic came to an end on a day lab­­elled Liberation Day. On this day a general partisan uprising, alongside the Allies during their final offensive in Italy, largely ousted the Germans from Italy. By the time of its demise, the Italian Social Republic had existed for only 19+ months. On 27th April partisans caught Mussolini, his mis­tress Claretta Petacci, several RSI ministers and other Italian Fascists, while they were attempting to flee to Switzerland. The next day the partisans killed Mussolini and most of the other cap­tives, including Claretta. Vittoria Mussolini, the second son, escaped to Argentina via The Vatican Route and was welcomed by the Minister for War, Juan Peron. 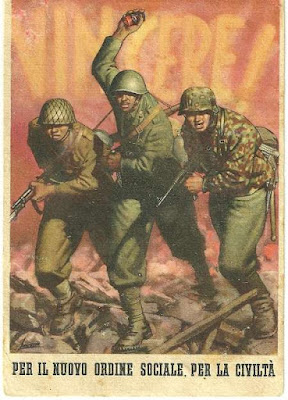 The Italian Social Republic might have been a make-believe state, but in its short existence, 240,000+ Italian civilian and soldiers died. The RSI Minister of Defence surrendered the survivors on 2nd May when the German forces in Italy capitulated; this put a final end to the crisis.

Villa Feltrinelli, where Il Duce lived, is now a luxury hotel that I visited (but could only afford afternoon tea). Down the road in Salò is the Museum of Salò on the shores of Lake Garda, that only opened in 2015. Richard Bosworth reviewed the museum of Fascist history and found it very unbalanced. The Museum’s stance was that the Germans were the perp­etrators of evil and the Italian Fascists were the tragic victims. And there was no reference to Fascism in practice or theory towards the peoples of the Italian Empire.

What a disastrous period. Even in the middle of a hideous war, the Italian soldiers and civilians would not have even known who the enemy was.

Hels, you have a knack of bringing into clear focus certain parts of history that were previously unclear or even unknown. I have been to Riva del Garda and, on a bus tour, had 'Mussolini's Palace' pointed out to me. It was a stunningly beautiful location.
Italy's flirtation with fascism has always puzzled me though it was never absolute or universal. These days Mussolini is generally portrayed as a ludicrous figure, almost comical in some ways. Thank you for shining some light on the reality!
CLICK HERE for Bazza’s capricious Blog ‘To Discover Ice’

Hello Hels, The machinations you describe seem incredible, yet they are within living memory. When I see these same nascent power grabs occurring in the United States (and other places, too), and knowing the speed of escalation, it makes me tremble for the future.
--Jim

Italy's civil war (1943-45) part of WW2 was even more divisive and more destructive than their fight against the Allies (before Sept 1943). What were they thinking???

The passion for Fascism went back to 1917 when Mussolini came back from WW1. He organised the Italian Combat Squad (WW1 ex-servicemen) in 1919, founded the National Fascist Party in 1921 and was soon elected to the Chamber of Deputies. In October 1922, Mussolini and the Black Shirts marched on Rome, intending to force King Victor Emmanuel III to set aside the old prime minister. The military could have easily controlled Mussolini and his Fascists, had the king asked them to, but he did not. Thus Mussolini's rapid rise to power.

I too tremble :( Partially because of the lunatics who have already grabbed power or are very influential in the USA, France, Britain etc.

And because of the lunatics waiting, ready to pounce. Iran's Guardian Council approves 6 or 8 candidates to run in that country's presidential election. Imagine what would happen if the present president (Hassan Rouhani) is shot or gaoled. He is a rigid extremist by Western standards, but at least he will talk to the West.

It is sad that we never learn from history and keep making the same mistakes.

agreed. If we had learned from previous world wide catastrophes like the Great War, there would not have been a World War Two.

But even more for Italy! I can understand the Germans concentrating their strength in the very north of Italy and I can even understand the Italian Fascists joining the German plans to save Italy from the Allied advances from Sicily. But once the anti-Fascist Italian government had declared war on Germ­any, the civil war that broke out between Italians was an obscene massacre.

I had very little idea of this . Thank you . Very interesting

I have found history blogs to be a readily accessible and well researched source of information, but I too had very little idea of The Italian Social Republic. Fascism in Italy is still a very divisive subject in general, and the civil war even more so, so I assume Italian historians move on to other subjects.