A kapo was a prisoner in a Nazi camp assigned to the SS guards, to supervise the forced labour. It was cheap for the SS since they didn’t have to pay the kapos. But more importantly for the SS, making an ordinary person into a kapo could turn one Jewish victim against all the other Jewish victims that he guarded.

In towns the functionaries would have been Jewish policemen or members of the Jewish Councils, not kapos.

Between 1950 and 1972 the newly formed State of Israel prosecuted 39 Holocaust survivors in the Kapo Trials.

At the Australian Association for Jewish Studies 2017 in Sydney, Dr Dan Porat’s analysis included all the Jewish policemen, kapos and other funct­ion­aries in ghettos and camps who were caught. They were charged with collaborating with the Nazis in implementing the Final Solution. The courts convicted two-thirds of the kapos who faced trial, and all of those convicted served gaol time ranging up to 6.5 years. Porat’s paper focused on the causes and outcomes of the trials, as well as questioning the moral implications of survivor behaviour during the Holocaust.

The identification of Jewish policemen and kapos in post-Holocaust Israel was easy. Citizens travelling on the same bus or drinking coffee in the same café would recognise their tormentors from 1941 Poland or 1944 Hungary, and would scream out loudly until the offender had been firmly identified. Israel’s Knesset/Parliament, in a tiny nation that absorbed over half-a-million battered survivors, HAD to act. Potential violence against the kapos had to be channelled into the proper court system; otherwise they might have been faced with summary justice in the buses and cafés. 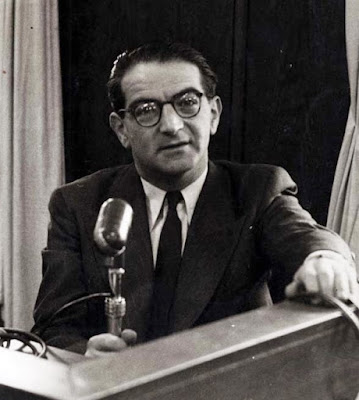 In August 1950 the Knesset enacted the Nazis and Nazi Collaborators Punishment Law. Entirely retroactive, the law targeted only those crimes committed during the Nazi regime; the nation would conduct trials of Nazis, their associates and collaborators who com­mitted War Crimes Against the Jewish People, or Crimes Against Humanity. The punishment for Crimes Against Humanity could be capital punishment. Between 1950 and 1961 this law was used to prosecute only 39 (35 men and 4 women) Jewish Holocaust survivors, alleged to have been Nazi collaborators. The rest of the accused Jewish kapos either escaped from Israel before being brought to trial, or were not charged because the eye witnesses’ accounts were conflicted.

Dr Porat studied the case of a kapo who had murdered a group of Jews in his camp, despite there being no SS guards in sight. The Jewish kapo was sentenced to death by the Tel Aviv district court, but this ruling was overturned by the Supreme Court. The idea of the grey zone, by which some Jews willing served the Nazis, counters our ideas of the Holocaust and thus we tend to ignore the ambiguous.

At the Sydney conference I was deeply offended by the concept of capital punishment. If a court felt it was necessary to punish a particular kapo, I would have been happy to have seen the criminal in gaol for the rest of his life, fed on bread and water. But for a Jewish judge or hangman to execute a kapo for doing what he had to do under Nazi control... that judge or hangman would have in turn been reduced to the level of the Nazis.

As it turned out, only two people were ever executed in Israel's history. In 1948 Meir Tobianski was an officer in the Israel Defen­ce Forces who was executed as a traitor on the orders of the IDF Intelligence Branch's Director. A year after the execution, Tob­ian­ski was exonerated of all charges. (Did the parliam­ent­arians apolog­ise to his widow and orphans?) In 1952, capital punishment for Nazi war crimes under the Nazi Collaborators' Law was imposed on a Jewish kapo called Yechezkel Jungster, a man who was convicted of viciously beating other Jews in the camp. Thankfully the sentence was commuted to two years' imprison­ment.

The second and last execution was carried out in 1962, when Holocaust planner Adolf Eichmann was hanged for genocide and crimes against humanity.

The world's lack of knowledge about the Kapo Trials comes from two causes, Porat noted. First the state archives and Yad Vashem archives prevent­ed access to the trial documents for 70 years. Second the idea that a few Jews may have acted in horrible ways does not match the dich­ot­omy we have of victim and perpetrator. It is still inconc­eiv­able to us that our parents and grandparents were tortured by kapos who may have gone to the same school as our parents in the late 1930s.

Yet if I was faced with my parents starving to death and my children’s diseases untreated, would I not have cooperated with the SS guards? Probably yes. Jews in Poland, Hungary and other threatened communities were desperate; to have not taken the remote chance of survival by cooperating to some extent with the Germans would have been the equivalent of writing the family’s own death certificates.

Yet British historian Paul Bogdanor has written a detailed book showing that Rudolf Kasztner was an unscrupulous Nazi collaborator in Hungary, rather than a Jewish functionary merely trying to keep his family alive. Kasztner’s Crime (Transaction 2016) clarified that by collaborating with the Nazis wholeheartedly, he wanted to avoid jeopardising, at any cost, the special privileges he received from them. So in the end he was said to play a small but specific role in the death of thousands of Hungarian Jews, by helping the Germans and their Hungarian allies buy precious time.

Would the Hungarian Jewish catastrophe have turned out differently, had Kasztner not cooperated with the Germans? Of course not. But the Kasztner Train in June 1944, which saved 1684 Jews by taking them to Switz­erland instead of to Bergen Belsen death camp, was said to be more due to careful Nazi planning than to Kasztner’s heroism.

How ironic then that after the war, Kasztner moved to Israel and became a successful worker in the ruling Labour Party. After an Israeli court accused him of having collaborated with the Nazis, Kastner became a hated figure in Israel, and was assassinated in 1957 by people who knew him during WW2. The Supreme Court of Israel overturned most of the judgments against Kastner in 1958, but it was too late. 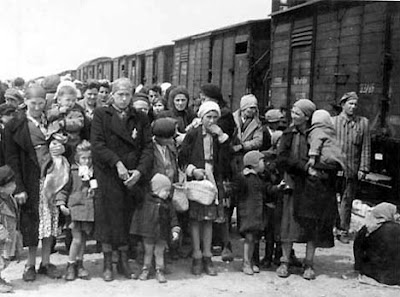 Hungarian Jews who had just arrived at Auschwitz-Birkenau,
May 1944

You did not believe in capital punishment for anyone! Not for Franco, Pol Pot or Idi Amin.

Hello Hels, This is another sickening facet of the Nazi nightmare, proving only that people under duress will do things against their natures, not that the Kapos really sympathized with the Nazis (or so I would like to believe). I don't see how human judgment could find an appropriate punishment for them, because a severe punishment seems too severe, and a lax one too lax.

On the subject of treason and punishment, after the U.S. Civil War, the government decided not to prosecute the rebel leaders as being too divisive. Even Jefferson Davis returned to regular civilian life.
--Jim

remember when the school discussed at great length the court case against Eichmann in 1961 and the possible punishment? There was a very clear expectation that a moral nation like Israel would not execute an enemy. Apart from making a brute like Eichmann into a martyr, no one should have understood the meaning of execution better than the Jews.

I despair for China, Iran, North Korea, Yemen, the USA and Saudi Arabia.

I am delighted to hear that after the Civil War in the USA, the government decided not to prosecute the rebel leaders. Firstly it would indeed have been divisive, probably for ever. Secondly in a civil war, both sides were citizens and brothers of the one country. To take revenge on brothers would have been doubly immoral.

I read somewhere that in ANY population about 1in every 10 people are capable of killing their neighbor if the right "buttons " are pressed . This is distinct from the proportion of the population that is psychopathic . I guess that this is why civil wars are so particularly bad and hard to get over . People who were expected to behave decently turn on each other and do the most appalling things . I actually think that it is a good thing fro the Jewish population to recognize that they are just as vulnerable to the evil which we all have to resit as anyone else . Going through the holocaust doesn't endow anyone automatically with a superior humanity just an example of surviving against the odds . I sometimes wonder how I would have behaved . I hope I could have been strong and done what was right .

if one in every ten people are capable of killing their neighbours in the Good Times, what would happen to the neighbours in time of starvation or war? The best you could hope for is that you would do whatever you had to do to save your family, legal or illegal, _without harming others_.

My mother in law lived through the Holocaust with Aryan papers. She could have safely survived without a worry if she kept quiet during 1944 and 1945, but she hid her youngest brother and sister in the attic of a nearby psychiatric asylum. She gave her wages to the senior psychiatrist and he ensured the siblings received soup and bread every night. She was a true hero to her own family; he was a true hero to strangers.

You must be very proud of her . I hope I could be so strong and good .

There by the the grace of someone, it is not a position I would ever want to be in. To what length would any person go to, to save their family. I do know of kapos but I didn't know that any went on trial.

I went to Israel for my mother-in-law's funeral in 1994, thinking I already knew everything there was to know about her years living under Nazi rule (1944-5). Her younger sister Bertha sat alongside the grave and described every day of life in the psychiatric asylum back during that dark time. Alone, Bertha said, she would have perished.

I didn't know whether to be more sad at the loss or more proud of the life morally lived.

it is a question that we have been talking about for months now - to what length would you go, to save your own life and your children's lives? The kapos did not volunteer for the job, but they understood that this was probably their only chance for family survival.

The trials in the 1950s only went ahead where there was evidence that kapos actually killed or greatly harmed other camp inmates.