Margaretha Geertruida Zelle (1876-1917) came from Leeuwarden, born to her Dutch father Adam Zelle, a merchant. Her father gambled the income away on oil shares and ran away from home, permanently. Her Javanese mother Antje Zelle fell ill and died when the four children were still at school. The grieving, hungry children were packed off to live with various relatives.

In the mid-1890s, Margaretha answered a newspaper ad seeking a bride for Rudolf MacLeod, a wealthy but brutal military captain based in the Dutch East Indies. The teenager sent a seductive photo of her­self and despite their age difference, they married in 1894. During their volatile, alcohol-affected marriage, Margaretha had a daughter who survived and a son who did not.

By the early 1900s, Mata Hari's marriage had failed. Her hus­band divorced her and disappeared with their daughter, so Margaretha moved to Paris. There she became a professional dancer, teacher and translator, and when she was hungry, she became the mistress of a French diplomat.

In Edwardian Paris, Margaretha's exotic looks were perfect. She created the Temple Dance by drawing on cultural and religious symb­olism that she had picked up in the Indies. She called herself a Hindu artist, draped in veils that loosely covered her body. In one exotic garden performance, Mata Hari appeared with a naked bottom on a white horse and breasts covered with beads. Completing her dram­atic transformation from military wife to an Indonesian princess trained in exotic rituals and Hindu dances, she called herself Mata Hari.


Clothes had always been her passion, and she spent a great deal of money on them after she became famous. Erte, the brilliant designer who later worked for the Russian Ballet, designed his first theatrical costume for Mata Hari. Mata Hari’s other couturieres included Georgette Brama, Louise Emery and Lucille, Lady Duff Gordon. They knew Mata Hari as a demanding customer who preferred her dresses to be as revealing as possible, and she was thought to be the best-dressed woman in Paris. She was photographed by the leading theatrical and fashion photographers of the day.

At this time Mata Hari tried repeatedly to enter the world of legitimate dance, opera and theatre. In 1910, she performed a dancing role in Rimsky-Korsakov’s opera “Antar”. In 1912, she performed in Gluck’s opera “Armide” and Antonio Marceno’s ballet “Bacchus and Gambrinus” at La Scala in Milan! 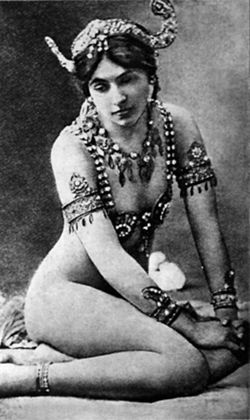 Mata Hari got off her white horse,
with a naked bottom and breasts covered with beads
1910

Mata Hari’s dances drove the Paris salons wild, then Berlin, Vienna, Madrid and other European capitals. Reporters across Europe described her as "slender and tall with the flexible grace of a wild animal, and with blue-black hair." "She was feline, extremely feminine, majestically tragic, the thous­and curves and movements of her body trembling in a thousand rhythms."

But youth doesn’t last forever. As younger dancers came to fame, Mata Hari's bookings reduced. She boosted her income by seduc­ing government and military men; sex was purely for money. Despite the grow­ing ten­sion in Europe pre-WWI, her lovers included Ger­man officers.

Despite the Netherlands remaining neutral in WW1, her relentless travelling and random sexual liaisons attracted attention from British intelligence who carefully searched and questioned her in 1915 and 1916. In fact it was MI5’s decrypting of German messages about Mata Hari that led to her subsequent arrest in France

At 40 Mata Hari fell in love with a 21-year-old Russian captain, Vladimir de Masloff, in 1916. During the affair, Masloff was sent to the Front, where an injury left him blind in one eye. Det­ermined to earn money to support him, Mata Hari accepted a lucrative assignment to spy for France from Georges Ladoux, an army captain who needed her “contacts” for French intelligence.

Mata Hari insisted that she planned to use her connections to seduce her way into the German high command, get secrets and hand them over to the French. So when she met a German attaché, she began tossing him bits of gossip, hoping to get some valuable information in return. Instead, she got named as a German spy in communiqués he sent to Berlin which were immediately caught by the French.

Some historians believed that the Germans suspected Mata Hari was a French spy and subsequently set her up, deliberately sending a mess­age falsely labelling her as a German spy. Others believed that she was in fact a German double agent. In any case, the French auth­or­it­ies arrested Mata Hari for espionage in Paris in Feb 1917. They threw her into the filthy prison at Saint-Lazare, with no visitors.

During lengthy interrogations by the military prosecutor Captain Pierre Bouchardon, Mata Hari seemed uncertain of which events in her life actually happened and which she had made up over the years. Eventually she admitted too much: A German diplomat had once paid her 20,000 francs to gather intelligence in Paris. But she had al­ways remained faithful to France - the money was compensation for furs and luggage that had once disappeared on a departing train while German border guards hassled her. "A courtesan, I admit it. A spy, never!" she repeated many times.

Mata Hari's trial for espionage came as the Germans were advancing. Real or imagined spies were convenient scapegoats for explaining military losses, and Mata Hari's arrest was one of many.

So when Mata Hari (?accidentally) admitted that a German officer paid her for sex, the French prosecutors depicted it as espionage money. And money she claimed was a regular stipend from a Dutch bar­on was portrayed in court as coming from German spymasters. Sadly the Dutch baron was never called to testify before the military tri­bunal. Nor did they call Mata Hari's maid, who handled the bar­on's payments. Worst of all, she had the 3 great character flaws - she was foreign, divorced and had sex out­side marriage. "Without scr­up­les, accustomed to make use of men, she is the type of woman who is born to be a spy," concluded Bouchardon.

The military tribunal deliberated for only 45 minutes before return­ing a guilty verdict. The defendant made a direct appeal to the French president for clemency and was horrified when he turned her down.

Mata Hari was executed by firing squad on 15th Oct 1917. Dressed in a French uniform, she had arrived at the Paris execution site with a minister and two nuns and walked quickly to the kill-site. She then turned to face the firing squad, removed her blindfold and was instantly killed.

It was an improbable end for the exotic dancer and courtesan, whose name came to stand for sexy spy who charmed war secrets from her lovers. At the time, The New York Times merely called her "a woman of great attractiveness and with a romantic history."

What do people believe now? Mystery and intrigue still surrounds Mata Hari's life and alleged double agency. Many people saw the 1931 film Mata Hari, starring Greta Garbo as the courtesan-dancer-spy and Ramon Novarro as her Russian flier-lover, called Lieutenant Alexis Rosanoff in the film. The conclusion seems to be that Mata Hari was thoughtless in her selection of sexual partners during WW1, but certainly not working as a spy for the Germans. The military files used against her were filled with information gaps, exaggerations and blatant lies.

This year is the centenary of Mata Hari’s execution, so there is a renewed interest in her story: Paulo Coehlo’s new novel The Spy, Ted Brandsen’s ballet by the Royal Dutch Ballet, and an exhibition at the Fries museum. Perhaps Mata Hari's letters, edited by Lourens Oldersma offer a more human side to this woman, as a victim of domestic abuse and historical circumstances.

I knew some of her story but I didn't know she was executed, a rather unjust punishment in my opinion.

I always thought that she was executed by the Germans rather than the French. She was certainly a tragic figure and a victim of her own life-style which to a great extent was foisted upon her. "Are you there? Say a prayer for the Pretender"!
CLICK HERE for Bazza’s singular Blog ‘To Discover Ice’

Hello Hels, Because of her exotic reputation, I thought that Mata Hari's spying career was more genuine and extensive. Somehow I am not surprised to see the sad truth of official scapegoatism on an outsider. This is part of a larger pattern I have seen repeated--I recall the Clayton Hartwig scandal, in which a U.S. Navy ship was blown up and as a coverup for general incompetence, they selected a crew member and accused him of being homosexual, because of course such a dangerous outsider would be treasonous and dangerous to his crew and ship. There was no proof, but plenty of evidence to the contrary, and the Navy ended up with egg on its face, but their reasoning was the same as in the Mata Hari case.
--Jim
P.S. The Wen Ho Lee case was similar, but this time using anti-Asian sentiment. However, like the Hartwig case, the public wasn't too quick to judge, and the government's case fell apart--but they expected knee-jerk xenophobic feelings to support them.

What happened to Mata Hari's only surviving child - did she meet her mother before the execution?

me too. Capital punishment would be abhorrent at any time, even if they could have established that she shared pillow talk with the Enemy Generals during the war. But she was a sexy dancer and courtesan, for goodness sake. The generals were not going to explain to her where the next invasion was going to be, and how many soldiers they were sending.

tragic because her father was a horrible man, her mum died early, her husband was brutal, her precious son was killed by poison and her beloved daughter was taken away. Then she had to make a living as best she could, totally alone in the world :(

"Say a prayer for the Pretender" indeed.

we will never know the whole truth, but you may be onto something important with the notion of scapegoatism. The war was not going well, official incompetence might be revealed (although censorship did a great job of cover up) and a show trial was needed. What better person to blame could there be than a homosexual, an Asian or a courtesan - they "asked for it"!

It reminds me of the Doctors' Plot hatched by Stalin in 1952–3. Important Moscow doctors were accused of conspiring to assassinate Soviet leaders, arrested and gaoled. Who better than doctors, since they always carried injections in their coats!

that was the saddest episode of Mata Hari's life. MacLeod got custody of the couple’s only surviving daughter Louise aka Non. MacLeod would not allow Mata Hari to send letters the girl, even when facing execution. And no member of the family came to collect the body.

Non herself died tragically at 21 in 1919. MacLeod had infected his young wife back in the mid 1890s and apparently the congenital syphilis caused the aneurism that killed their daughter.

I knew some of her story but I didn't know she was executed, a rather unjust punishment in my opinion.

I don't believe in capital punishment under any circumstance, let alone for a crime that was never proved. Shame, France, shame.

Mata Hari is the very epitome of beauty and feminine seduction. As a courtesan, she captivates the most influential men of her time, and she exerts a hold over our imagination to this very day. But as WWI raged, did Mata Hari really betray secrets revealed to her by her influential lovers? Was she a German spy? Was the death sentence passed by the French justified? This documentary tracks down the true Mata Hari - the most famous and most beautiful spy of all time.

MATA HARI: THE BEAUTIFUL SPY will be on the History Channel, Saturday 11th March 2018 at 7:30pm- 8:30pm then repeated on Sunday

many thanks. I will watch it in half an hour.