By 1932, during the Great Depression, at least one-quarter of the American workforce was unemployed. When President Franklin Roosevelt took office in 1933, he needed to strengthen the economy ..and provide jobs and relief to the nation’s working families and to the unemp­loy­ed. Over the next eight years, the government instituted a series of experimental programmes that aimed to restore some dignity to working families. This was the New Deal.

President Roosevelt's New Deal legislation tackled the incr­eas­ingly desperate housing shortage via the formation of the Housing Division of the Public Works Administration in 1933. In Oct 1934 the National Association of Housing Officials held a conference which:
a] established housing standards,
b] devised a plan for creating pro­jects through local agencies, and
c] criticised slum clearance polic­ies.

Very soon a bill was presented that would give federal money to local authorities for low-income housing projects. In 1937 Congress finally approved the United States Housing Act, "to provide financial assist­ance to the states and political subdivisions thereof for the prov­is­ion of decent, safe and sanitary dwellings for families of low income." It had taken 4 long years!!

Even though the USA was not sending soldiers off to WW2 yet, The Defence Homes Corporation-DHC was created in October 1940 to finance housing subdivisions and apartment complexes for workers in war industries. Conservatives were furious! In order to insure conservative opposit­ion would not prevent the legislation from going ahead, DHC agreed only to construct public housing where the private home-building industry was NOT functioning. Hundreds of housing projects were completed and hundreds more were started, but hostile right wing political campaigns continued. 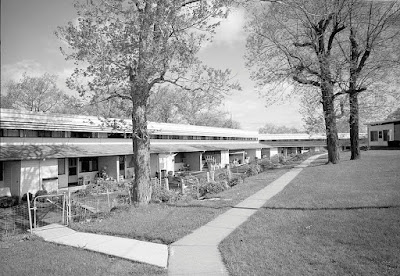 one storey row houses
each with its own porch

By 1941 very loyal workers in the Alcoa plants in the Allegheny Valley near Pittsburgh were also being transferred to defence work. Architect Walter Gropius had designed successful Bauhaus housing projects in his home country (Germany) back in the 1920s, so when the Roosev­elt administ­ration urgently needed housing for these workers, they turned to Gropius. He was, he said, creating appropriate architecture for the modern age that would utilise machines to produce rational, standardised buildings.

The documents for this project, written in July 1941, illustrated the architects' concerns for the overall health and well-being of the workers who would live at ACT. So Gropius and Breuer produced a layout in which almost every one of 35 row houses faced the sun. Large windows let the light flow into the open-plan interiors, which used low partitions to divide the internal living spaces. All this made the homes seem larger. Wooden awnings shielded the windows from the high summer sun. In addition to the beautiful green areas around the entire project, each tenant had his own private terrace opening from his own living area. 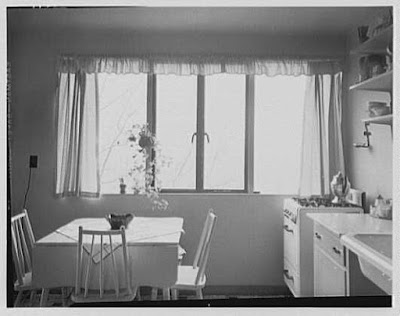 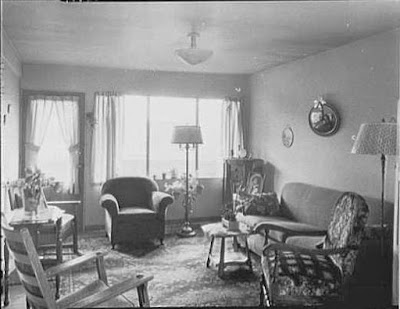 This was similar to the architectural designs for private houses in New England at the time, including Grop­ius' own house in Lincoln Massachusetts (now a museum). But ACT houses were much cheap­er and much smaller! Gropius and Breuer laid out the buildings along a ridge, pay­ing spec­ial attention to the land contours in a typically hilly Pittsburgh-area site.

The name Aluminium City Terrace was used because of the historic Alcoa plant that had been there, employing 7,000 workers. But they did not use aluminium. Even when ACT was being built, the local aluminium was being redirected from consumer products to the burg­eoning war effort. The buildings were made of brick, cedar and glass, still reflecting the very spare, very rectangular Bauhaus style developed in Germany.

As did the communal facilities. The Community House offered a large meeting room with a demonstration kitchen, a nursery for babies, and a room for arts and crafts. Then the Child Welfare Building provided additional space for community activities, a preschool and a children's clinic.

Post-WW2
When the war ended in 1945, the federal government began planning to sell off defence housing projects quickly and cheaply. However, by July 1946, the government’s National Housing Agency (NHA) issued a plan for the "disposal of permanent war housing to mutual ownership corporations."

Aluminum City Terrace was the first defence housing project in the USA to be purchased by tenants under provisions of the Mutual Own­er­ship Plan of 1948. This was despite more protests from a hostile Congress and from local landowners who predicted that working families would inevitably create a future slum and lower property values. In 1948, the experiment in wartime housing did indeed become a co-op. Since then, the management of the neighbourhood has been overseen by a board of directors, all residents, who meet monthly to do ensure the upkeep of the buildings and gardens, and other communal tasks. 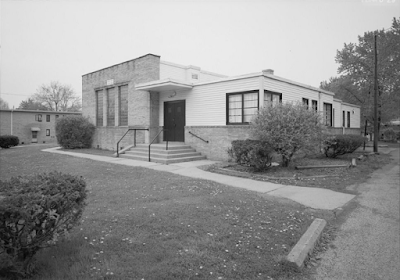 The first Community House
with intact meeting hall, kitchen etc
Note the lawns and trees were being planted in all communal spaces

When the war ended, Gropius published Rebuilding Our Communities. The book concluded with a number of photographs of Aluminum City Terrace and an important challenge for every citizen. Some excellent contemporary photos can be seen in A Sometime Architourist.

Since then the buildings have been sig­nificantly and sensitively remodelled. In the 1960s, most of the wood siding were removed and the wooden sun screens were replaced with long, aluminium, louver-like sunscreens. While they don't look like the historic Bauhaus-style product they once represented, the buildings are still attract­ive. And the Terrace meets the requirement that Gropius set so long ago: that housing for working families be as well designed as anything he produced for affluent clients.

In 1995, the Historic American Engineering Record performed careful visual documentation, as required for all important historical architecture. Just as well! Most housing communities built during the war were demolish­ed, even though they were des­igned by such not­ab­le architects as Louis Kahn, and even though they had achieved international fame by 1945. Alum­inum City Terrace was perhaps the only one to survive and thrive.

I am not surprised other public housing projects did not survive across the USA. Conservatives believed the ACT never served as a model for post-war private housing because it did not offer the traditional single family, suburban housing that Americans wanted. Millions of working American families, on the other hand, thought ACT was a democratic, affordable and attractive version of suburban housing. As do I.

It is difficult to imagine such projects getting off the ground these days, though wouldn't it be wonderful if some innovation was used when housing those (an increasing number here) who can't house themselves.

To destroy carefully planned housing communities after the war was an obscenity. And to do it because they didn't want to be seen helping working class families (or returned soldiers) was worse.

Hello Hels, I know that some famous architects had grand plans for mass communities, yet most of the time the minimum of quality was built in, and the projects (what a depressing term!) immediately went into a state of deterioration, and many have since been torn down, so the sacrifice of the older buildings destroyed in "slum clearance" was doubly not worth it. There are some successful planned communities in the U.S. and elsewhere, but something about them seems to go against the grain for many people.
--Jim

Buying houses for young families is almost impossible now, so people have the miserable choices of living with their parents, delaying marriage or renting for ever. So we can imagine what it must have been like during and after the Depression, and during WW2. I think the opponents were so anxious to destroy the New Deal, they were prepared to pay whatever it took. Even at the expense of losing successful housing programmes.

the origins of housing support started during the Great Depression when banks failed and homes with loans were foreclosed. The National Housing Act of 1934 regulated the rate of interest, increasing the number of working families who could afford a down-payment on a house and monthly payments on their mortgage.

But it was only in 1937 that Congress finally approved the United States Housing Act, giving federal money to local authorities for low-income housing projects designed by high quality architects. Brilliant programme, but short lived :(

Not really "mass programmes". Aluminium City Terrace planned only 250 homes, grouped in 35 multi-unit row house buildings. Kensington Gardens Apartments in Buffalo had only of 280 small or bigger homes in detached and semi-detached buildings. Today 250 families might live in one huge block of flats :(

But the question I want to focus on is why did "something about them seem to go against the grain for many people?" The people who were lucky enough to move into a clean, airy home of their own for the first time adored living there. So who disapproved? And why?

Hi Hels. This has reminded me of the Nissen Huts that were built around the world from the First World War onwards but mostly of the massive number of post WW2 prefabricated houses (‘prefabs’). Churchill had instigated the scheme to build 200.00 new homes in the UK to meet the shortfall of post-war housing. While I was growing up, prefabs were seen as a stigma but now the few remaining ones are sought-after.
It’s a real puzzle that they were not massively used in the USA and it would be a good idea to re-introduce the idea into the UK now. The huge housing shortage has led to crazy house-price inflation here now. Where is Walter Gropius when you need him?
CLICK HERE for Bazza’s unimaginable Blog ‘To Discover Ice’

Those terrace homes look good to me. Another community housing project which was good but then destroyed, was on the site which became the Hollywood Bowl concert space. I read about it in City Of Quartz.
British prefabs of post WW2 were shown in final series of Foyles War when the Sam Stuart character lived in one.
Thanks Hels, Happy Easter.

I remember the Nissen huts very well indeed. Ours were half-cylindrical covers of corrugated steel - cheap, prefabricated and easy to prepare for the squillions of migrants who arrived from 1946-early 1950s. When my beloved arrived in Australia in 1951, he and his parents were immediately placed in a migrant hostel on the rural edge of Sydney.

Walter Gropius did work in Britain from 1934, as part of the Isokon group. But his efforts in pre-war London were very leisurely and classy (eg Lawn Road Flats in Hampstead), not small, fast and inexpensive as they had to be in WW2 USA.

Renovation is always required, but for goodness sake, don't destroy historical monuments just because some critics didn't like modernism.

I wonder if ParentsOfBeloved knew my elegant friend Mrs Hesse [b Riga 1930] who was in the same place at that time.
She has described the difficult conditions to me.
re Hollywood Bowl: I think from memory, the housing development was as stylish and pleasant and may have been for Mexicans, and on the site during that 1929-1970 gap you list above.
Think I loaned City Of Quartz to a blogger. whyever do loaned books never come home again?

my late parents in law remembered everyone, especially if they spoke German/Yiddish, Czech, Hungarian or Russian. They were so grateful to be safely on Australian soil, they lived in and out of each other's Nissen hut, sharing cups of tea.