Once a rural hamlet on the edge of New York, Groenwijck was a Dutch neighbourhood on the west side of Lower Manhattan, later renamed as Greenwich Village. Thanks to Parn­as­­­sus and Ephemeral New York, I am particularly interested in this small area of land during the later C19th and the early C20th, when small presses, art galleries and experimental theatre thrived.

Greenwich actively encouraged an avant-garde and alt­ern­ative culture to est­ablish itself and to succeed. But which came first? Did the modern attitudes of many of the Village’s resid­ents support new political, artistic and cultural ideas, and entice other like-minded people to move in? Or did artists and writers move in for other reasons (eg low rents) and become radicalised by the neighbourhood? Perhaps they simply loved the Village’s speakeasies and cool cafes.

There are many elegant brownstone-lined streets in the Village but St Luke’s Place in the West Village is one of the loveliest. And the most expensive. Built in the early 1850s opposite Trinity Church's cemet­ery, the 15 row houses lived on the north side of the road. This block of brick and brownstone Greek and Renaissance Revival row houses displayed arched entries and pediment-topped windows that typified mid-century Renaissance Revival architecture. 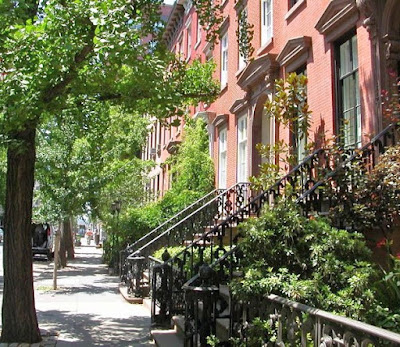 These once wealthy homes were divided into flats at the turn of the century and attracted another generation of writers and artists. The Pen and Brush Club sprung up in 1892, an organisation of professional women in the arts. Mark Twain purchased a mid century mansion in c1900 and hosted luxurious parties that people remembered for years. I will come back to St Luke’s Place later.

The Tenth St Studio Building was commissioned by James Boorman Johnston and designed by Richard Morris Hunt back in 1857. Its location at 51 West 10th St was ideal and its inn­ov­ative design suited the needs of young artists perfectly. The glass-domed central gallery interconnected with the radiating rooms so that each artist could have his own well-lit studio space.

If a building can be said to entice new comers, The Tenth St Studio Building certainly did! The buil­d­ing quickly helped to make Greenwich Village central to the arts in New York, attracting a wide range of artists to paint, show and hopefully sell their art. Even I, who went to a univ­ersity where Art was what came out of Italy, France and Britain, know that Winslow Homer (1836-1910) and William Merrit Chase (1849–1916) lived there, as did Frederic Church (1826-1900) and Albert Bierstadt (1830-1902) of the Hudson River School. The Tile Club, famous in the 1880s as a place to discuss new ideas in art, was within easy walking distance. 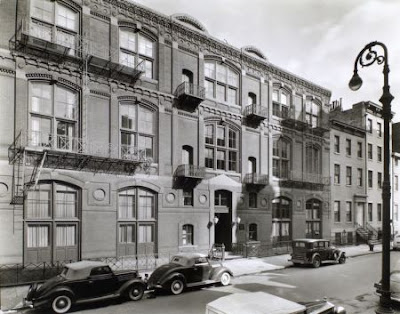 Another important site was the Hotel Albert that opened during the 1880s and soon became a cultural heart of Greenwich Village; it fun­ctioned as a meeting site, eating place and residence for impor­tant artists and writers. The people I know best were Mark Twain, Walt Whit­man, Robert Louis Stevenson, Anaïs Nin, Thomas Wolfe, Salvador Dalí and Philip Guston. And there were few more Bohemian places in the USA than Hotel Albert for dancer Isadora Duncan, writer William Faulkner and playwright Eugene O'Neill.

St Luke’s Place became even more famous (or infamous) when writer Max East­man pub­lish­ed a socialist literary magazine called The Masses from 1911 until 1918. Eastman invited the best writers, eg John Reed, Carl Sandburg, Upton Sinclair, Sherwood Anders­on and Louis Unter­mey­er, to contribute. The Masses was banned by the Justice Dep­art­ment in 1918 because of its opposition to American soldiers being involved in WWI; The Masses’ writers were tried with conspiracy to commit treason. Twice!

Supporting up and coming artists was an admirable but risky project for patrons. Just as WW1 exploded in 1914, Gertrude Vanderbilt Whit­ney estab­lished the Whitney Studio Club at West 8th St as a facility where young artists could exhibit their works. Even in the strug­g­ling inter-war era, Whitney worked on her greatest legacy, the Whit­ney Museum of American Art. Founded in 1931, the Whitney was her ans­wer to the slightly older Museum of Modern Art and its collect­ion of mostly Europ­ean modernism. Gertrude Whitney was angry that Americ­an Art had been neglected and decided to put her efforts into a museum that would celebrate her own 25-year collection of modern art works. 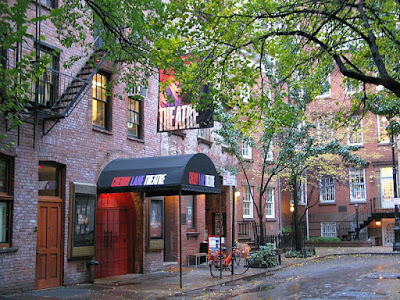 
The Cherry Lane Theatre was established after WW1 ended and is now New York's oldest continuously running Off-Broadway theatre. Poet-play­wright Edna St Vincent Millay and her colleagues in the Provinc­e­town Players converted the previously existing buildings into a theatre which opened in 1924 with a new play by WJ Turner. During the 1940s The Living Theatre, Theatre of the Absurd, and the Downtown Theatre Movement all settled there, a place where young playwrights and ambitious actors could display their talents. 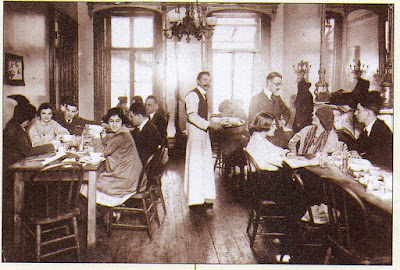 A Village place to eat, drink and socialise in 1915
Photo credit: Heart of a Vagabond

It is no exaggeration to suggest that Greenwich Village was known as the artists' haven and Bohemian cap­ital of the USA. The diaries, books, paintings and photos say it was!

Present day Greenwich Village is a very pleasant place to spend some time and enjoy a long lunch. Its traffic is not manic as in central Manhattan and the area feels peaceful and relaxed. Your historical knowledge and knowledge of the arts makes me feel very inadequate, but I do enjoy reading your eloquent posts. Interesting piece in today's media about the acceptance of Paul Robeson in England.

I am glad you did not just look at the artists. The writers made Greenwich special didn't they, esp Max Eastman and his Masses mates.

agreed... very pleasant, green, relaxed and with a rich cultural history. So I asked my three American first cousins why none of them lived in West Village or Greenwich. They thought I was demented!! As we might have guessed, West Village is the most expensive suburb in the _entire_ USA and Greenwich comes a close 6th.

nod. I know that you are as passionate about literature as I am about the fine and decorative arts. So I do have to be a bit more expansive about cultural history in this blog. Fortunately it was easy to do in this part of Lower Manhattan.

have you toured around this part of New York? To find information on the two-hour Free Tours by Foot, see:
http://www.freetoursbyfoot.com/new-york-tours/walking-tours/greenwich-village/

Hello Hels, Although I have often read about Greenwich Village, I did not associate with it all the famous names you mention here.

It is not only important historically; the traditions still continue. Calvin Trillin is one modern writer associated with Greenwich Village who wrote constantly about living there, and the different restaurants, services and neighbors he encounters. The difference is that now you need to be as famous as Trillin to be able to afford to live there!
--Jim

I imagine that apart from the small problem of exorbitant mortgages/rentals, Greenwich Village is still highly desirable for people who enjoy a very cultural enriched life. Their neighbours, their history, their architecture... but also wonderful institutions. Imagine living within walking distance of the Whitney Museum of American Art or Cherry Lane Theatre. Plus lots of locals want to get involved in Greenwich Village Society for Historic Preservation.

Calvin Trillin is a name that I haven't heard for a long time. Bless his brave heart... he used to write about integration and racism when I was at uni.

Its a shame isn't it, when areas which are truly interesting start to be taken over by the wealthy or the middle classes who ride on the coattails of the politically progressive and creative types who have rendered the area desirable in the first place .I dont mind them coming but the hike in real estate prices is just the pits . It happens in all big cities . I often think that it is interesting to see where the creative types are hiding out now rather than where they were 10 years before. We really need to make housing affordable for everyone . We need much more affordable long term rental housing so that neighborhoods can stay REAL and not just some sort of parody of what they once were . That feels better ! Nothing like a good rant:)

Hello Hels. I remember when I was a teenager and into folk music, I read about an up-and-coming new style of singer named Bob Dylan. He was playing in the cafes around Greenwich Village and it sounded like heaven to me. I had not heard of the place until then but I really wanted to go there! So it was definitely a similar kind of place to what you have described at that time (early sixties).
CLICK HERE for Bazza’s fabuous Blog ‘To Discover Ice’

interesting, isn't it. Greenwich Village was laid out with north-south streets and then the east-west streets crossed them at right angles. Plus the area was quiet, tree lined and eventually was filled with low rise architecture. All very attractive qualities! So it was the physical cityscape that made the area desirable in the early 19th century; the politically progressive and creative types made it a delight for us in the late 19th century and into the Inter-War era.

Everyone wanted to live there. Alas the small amount of land and the large numbers of would-be residents have pushed the prices up and up. Of the USA neighbourhoods with the highest rent per square foot (sorry about the imperial measurements), Business Insider says the West Village in New York was #1 at $6,030 per month!!!!! Which working family can afford that??

Although this post largely examined the cultural history of Greenwich only until 1950, for our generation those bohemian and hippy 1960s were the key contribution to world music and to world peace. The Bob Dylan Greenwich Village Walking Tour still takes people on guided visits to Washington Square Park where the music groups played, to the townhouse Dylan bought and loved, to the Folklore Centre and Commons Cafe with its poetry reading etc etc.