Baron Cosmo Duff Gordon's finest moments...and the not so fine ones

Sir Cosmo Duff Gordon (1862–1931), 5th Baronet of Halkin was born into a prominent Scottish land owning family. But where did the title come from?

Let us go back into history. Dear great-uncle James Duff (b1734) had never married and took on his nephew William Gordon, son of his sister Anne Duff and Alexander Gordon, as a partner and eventual heir. Their firm, the Duff Gordon & Co., founded the sherry bodega in Spain.

In 1790, James Duff was appointed permanent British Consul in Cadiz in Spain. During the Peninsular War he did what he could for the British, and for the Spaniards who had a wretched time under Napol­eonic occupat­ion. In 1813 great uncle James Duff was awarded a baronetcy, in recognition of his aid to the Crown during the war, only two years before he died in 1815.

So by the time Cosmo Duff Gordon was born in 1862, the family was very successful. But I set the students the task of finding notable achievements he was personally responsible for.

Firstly in 1900, Duff Gordon married the famous London fashion designer Madame Lucile (née Lucy Sutherland) as I discussed in an earlier post. It was Lucile’s own hard work and talent that eventually made her a star couturier in all the main fashion centres of the world. Nonetheless it did not hurt that Sir Cosmo's backed and funded Lucile Ltd in 1903, to sell her designs. His noble title also helped Lucile gain acceptance at court and win prestigious clientèle among the aristocracy. Not too many husbands would have supported their wives' business; Duff Gordon was totally supportive as Lucile's business expanded, with branches opening in New York City, Paris and Chicago in 1910, 1911 and 1915.

Secondly he was a very impressive sportsman in his own right - a self-defence athlete. His sport, Bartitsu, was a martial art form brought to Europe from Japan by Edward William Barton-Wright (1860-1951). Barton-Wright had spent considerable time in Japan during the 1880s and was keen to teach Britons non-aggressive self defence that did not require guns. So Duff Gordon co-founded the Bartitsu Academy of Arms and Physical Culture, in Shaftesbury Ave London in 1898, using Barton Wright's expertise and Duff Gordon's money. 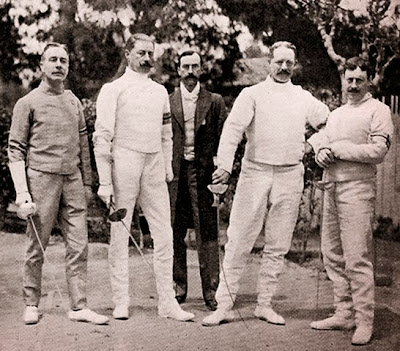 with the English fencing team at Athens, 1906.

Duff Gordon’s real specialty was fencing. Here he succ­ess­fully represented Great Britain at Athens' 1906 Olympics Games. Along with William Grenfell 1st Baron Des­borough and Edgar Seligman, he won a silver medal in the team épée event when he was 44 years old! Duff Gordon soon became the co-founder of the London Fencing League, and both Duff Gordon and Grenfell were members of the organising committee for the 1908 London Olympic Games.

If readers are having trouble locating the Athens Games of 1906, it is because they have since been downgraded by the International Olym­pic Committee. The 1908 Games are now seen as the start of the Fourth Olympiad, in keeping with the 4-year cycle we are used to. None­theless in 1906, the British newspapers were delighted that the fencing team brought great honour to their nation and a moment of enormous pleasure to Duff Gordon.

Thirdly the sinking of the Titanic in 1912 offered Cosmo a final chance for fame. Or infamy. On the night of the sinking, the Duff Gordons approached a sen­ior officer who was supervising the loading of the Emergency Lifeboat 1; they asked if they could get in and received permission to go ahead. A few min­utes later Lifeboat 1 was sent off to safety with only the two Duff Gordons, 3 other passengers and 7 crew members. After the Titanic sank, the senior crew member asked those in the lifeboat whether they ought to go back to help the people struggling to stay afloat in the freezing ocean. Lady Duff-Gordon warned they might be swamped by people trying to get on board and refused permission. Clearly they could not have saved all 1200 passengers from the Titanic, but their boat built for 40 people might have saved another 28 human beings. 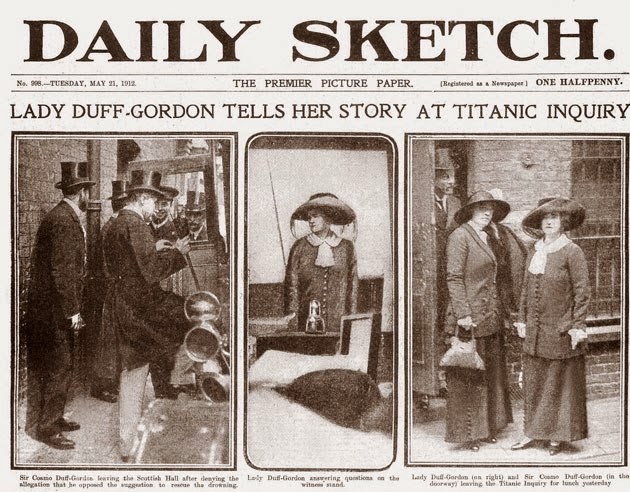 The Duff Gordons’ testimony at the Titanic Inquiry drew intense coverage in the Daily Sketch (21st May, 1912)  and other newspapers. The editor on this front page concentrated on Lady Duff Gordon, but it was Cosmo Duff Gordon who was grilled at length by the Inquiry.

The sinking of the RMS Titanic in mid April 1912 resulted in an inquiry by the USA Senate. The senate in­quiry began its hearings in New York in late April 1912 and concluded in May 1912. The senators questioned surviving passengers, crew and rescuers, and published their final report to the Senate in late May 1912. Duff Gordon was one of the passengers questioned, but he was not attacked.


Later Duff Gordon had to appear before a packed British Inquiry to def­end himself against the accusation that he had bribed the crewmen to sec­ure his escape from the Titanic; that the crew were warmly en­cour­aged not to return to the scene of the Titanic to rescue swimmers. Though he was cleared of all blame by the Board of Trade inquiry in May 1912, Cosmo had been brutally cross-examined and remained tainted by sus­picion that he had acted selfishly. He was one of the few male first-class passengers to escape the Titanic disaster alive.

It is inter­esting that another Olympic star was a 1st class passenger on the Tit­anic. Dick Williams, a tennis player in the USA team, was travel­ling with his father Charles Duane Williams. His father perish­ed in the disaster but Dick stayed alive in the ice-laden waters. Happily our Sir Cosmo Duff-Gordon died in the warmth of his own London bed decades later (in 1931).

Lady Lucile continued to work as a fashion columnist, and she wrote an aptly named, very successful autobiography called Discretions and Indiscretions in 1932. She died in London four years after her husband in 1935.

I am loving the Titanic material. Didn't know about the Duff Gordons however.

there was something exotic and seductive about the Titanic. apart from it sinking on its maiden voyage. The people it attracted and the facilities it offered were very special indeed. Did the Duff Gordons fit in to the wealth and social status? Well yes... Cosmo Duff Gordon was a fair dinkum baron and a wealthy man besides.

Anything Titanic related continues to fascinate. Self preservation is a strong instinct as we have we learnt in so many of your posts. It does sound like the couple did save themselves at the expense of other people's lives.

Hello Hels, It seems that the Duff Gordons by and large enjoyed their wealth and position in a positive way. The Titanic episode sounds suspicious; why would the lifeboat be "sent off" with only a few people in it, when all had to be aware of the disaster looming?

I just added "Discretions and Indiscretions" to my book list--looks like a real page-turner.
--Jim

This reminds me of a game we used to play at uni. "What would I do if I was in this tragic situation - would I save myself first? My spouse and children first? Should gentlemen stand aside and risking dying so that women are offered a seat on the life boat first? Should the people in Steerage be locked below deck, allowing First and Second Class passengers into the life boats first?

Gertrude van Tijn might well have identified with the dilemma in WW2 Netherlands, indeed!

It is interesting that you know of the autobiography of Lady Duff Gordon (published 1932).

I doubt I would have ever heard of Cosmo Duff Gordon, if it had not have been for Madame Lucile and her amazing career as a couturière. Yes he was an Olympic medallist, a wealthy member of the aristocracy and a founder of the successful Bartitsu Academy of Arms and Physical Culture. But when shove comes to push, fashion writers and social historians were fascinated with the humbly-born Lucy Sutherland aka Lady Duff Gordon, not her well-born husband.

re the unlikelihood of a life boat being launched with very few passengers and crew, the inquests after the sinking suggest that the story was largely true. But even if the life boat had been full, it would have been for women and children.

In Encyclopedia Titanica Lady Duff-Gordon herself knew that men couldn't get into a life boat before the women and children had been saved. She declared that she saw an officer shoot one of the male passengers who endeavoured to force his way into a boat, and others agree that there was a shooting. But it appeared to have been more for the purpose of restoring order and frightening ‘panicky’ passengers than with the intention or necessity of killing stampeding (male) cowards.”

The fact that Lady D-G commiserated with her maid over the loss of a dress, while people were drowning in icy water, suggests a lack of empathy, at best. I know people sometimes say odd things in stressful situations; but still. Everyone on board the lifeboat confirmed that she had said that, apparently.
And the way Cosmo, immediately after the dress comment, offered to write each member of the crew a cheque for a specific amount of money suggests a bribe. If his intention was purely charitable, as he claimed, you would not expect him to go into details of cheques he would be writing the next day, again, while people were drowning.

The story was so bizarre :( It was perfectly understandable that the couple would want to save themselves and that they would want a member of the crew in their lifeboat to row them to safety. But if each life boat held 40 people safely, you would expect the Baron and his wife, one sailor and 37 other passengers. Instead the life boat sailed away from the Titanic with the Baron and his wife, 5 sailors and 5 other passengers.

I too read about offering cheques to the sailors, as long as the sailors did NOT go back towards the sinking ship to rescue people who fallen overboard and needed to be rescued quickly. Since Duff Gordon was a sheriff and magistrate in Aberdeen for many years, I assume he understood the law. Therefore we have to assume that Madame Lucile was the one who insisted that picking up icy people from the water would only endanger those already in the lifeboat.

In all the other Titanic families that we looked at in class, the man was the more important spouse. With the Duff Gordons, Lucile might have been the better known and loved.

that is very true. But without Cosmo's landed wealth, baronetcy and introduction into court, Lucile would probably not have had the patronage of the aristocracy, royalty and theatre stars.

Hello again, I recently found out the amazing fact that Lady Duff Gordon was the sister of pot-boiler novelist Eleanor Glyn, most famous for "Three Weeks" and "It" and thus the creative force behind "The It Girl" (personified by Clara Bow).
--Jim

this was very true... Elinor was the racy, naughty sister.

I would recommend an old book: The It Girls by Meredith Etherington-Smith (1986) covered by Lucile Duff Gordon & Elinor Glyn.