Although my knowledge of history doesn’t go back beyond the 17th century, this story was fascinating because I am besotted with gold and silver art.

And another thing. The History Blog noted that while England’s Treasure Act has a mechanism that gives finders and landowners a reward in the amount of the discovery’s market value as assessed by a valuation committee, German monument protection laws have no such mechanism! If dug-up objects are to be returned to the nation, I would hope the finder lives in a country with helpful Treasure Acts.

Every collector of antiques would love to discover a treasure that was never known about, or had been forgotten over the centuries. Imagine the excitement when gold objects were accidentally dug up in Staf­fordshire by Terry Herbert in mid July 2009! He had been searching an area of rough farmland with a metal detector and over a few unbelievable days, he recovered enough gold objects from the soil to fill hundreds of bags. At this stage Terry Herbert rang the Finds Officer for the local Port­ab­le Antiquities Scheme. The landowner granted permission for a professional ex­cavation to search for the rest of the hoard. 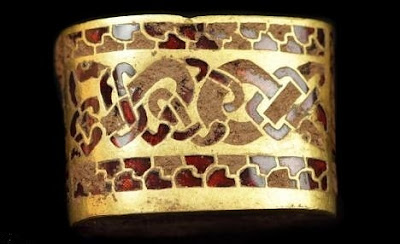 
Birmingham Archaeology did the serious fieldwork. Ploughing had spread the artefacts around, so an area 9 by 13 ms had to be excav­ated in the search. Because of the importance of the find, the exact site of the Staffordshire Hoard, as it was called, was not announced to the public until mid September 2009. Terry Herbert’s find was sold to Birmingham museums after becoming a world-wide phenomenon, leaving both the finder and the land owner very rich indeed. Birm­ing­ham Museum & Art Gallery opened a new room to display the objects, principally funded by the Heritage Lottery Fund.

Hundreds of pieces from the Hoard are on show where visitors see the exquisite craftsmanship with their own eyes. But what can the Staf­fordshire Hoard tell us about warrior splendour in C7th Anglo-Saxon England, about the life and death of a C7th Lord and his warriors? Who owned these amazing objects, how did their makers achieve such fine detail, and why was every item buried?

Historic England has given £400,000 to help reveal the secrets of the Hoard; the research results will be published in a catalogue by 2017. The owners, Birmingham & Stoke-on-Trent City Councils and Birmingham Museums Trust, have also contributed towards the research. The research is being carried out by Barbican Research Associates, whose first task was to reveal the artefacts in their original form. 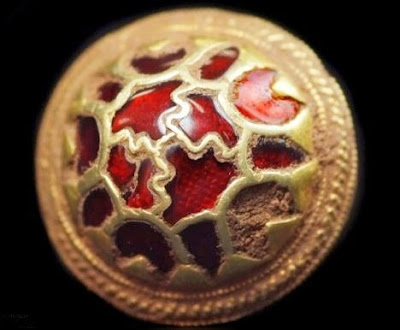 gold with inlaid garnets,
scabbard boss, a fitting for a sword

The display features a raised wooden-floored mead hall, with columns and banners adorned with Anglo-Saxon artwork. Note the beautiful gold sword hilts, jewels from Sri Lanka, exquisitely carved helmet décor­ations and early Christian crosses. In this age of warrior splendour, the gold and silver war-gear was probably made in workshops cont­rolled by some of England’s earliest kings, to reward warriors that served those battling rulers. Many of the finds were decorated with pagan and Christian art, designed to give spiritual protection in battle.


The pommels were exciting. Although Anglo-Saxon in style, the pommels also had pagan and Irish influences in the ornamentation. For example central garnet and glass inlaid discs formed early Christian crosses while one of the motifs represented three serpents. Decorated with gold filigree ornament and inlaid with niello (a black inlay formed from copper, silver, and lead sulphides), these objects were gorgeous and high status.

I do many of the art history subjects, but don't remember examining Anglo Saxon gold and silver work. Someone was very rich.

Why don't the German monument protection laws reward the finder? Surely that would only encourage secrecy and private dealing, thus depriving the state museums of important historic relics.

that is so true. We used to study Italian Renaissance, Dutch 17th century etc all the time. Now every wants modern (i.e Victorian and more recent). But in any case, Anglo Saxon art would have never been considered.

What a shame. The exquisite craftsmanship and gorgeous materials mean the owner was wealthy AND had splendid taste.

The cultural heritage laws of Germany vary between the 16 states. Only in the states of Bavaria, Hessen and Westfalia do finder and landowner equally share the value of the treasures. In all other states of Germany, the found item automatically becomes property of the state if it is of archaeological importance.

As you say, if finder and landowner get nothing, no finds will be reported :( Even important finds will disappear.


Thanks for your comment Anon, but I don't believe in advertising.