Public sculpture and the history of Melbourne

In "Casting aspersions on state of the art" in the Sydney Morning Herald, 8th Dec 2012, Steve Dow asked should public sculpture be a monument to patriotism, to good artistic taste, or humbly aim to keep the public happy? The first response came from sculptor Ron Robertson-Swann, now the head of sculpture at Sydney's National Art School. His own abstract minimalist sculp­t­ure Vault was placed in Melbourne's City Square in 1980, and after pitting conservative detractors against progressive art supporters, the “yellow peril” was hastily moved to a less central area the following year.

Despite his experience with Vault, Robertson-Swann was on Melbourne’s side. Melbourne has more good outdoor sculpture, which he defined primarily as having artistic merit as well as inviting public interaction, than Sydney does. In Melbourne he cited Denton Corker Marshall's yellow and red-stick sculpture Melbourne Gateway, which greets visitors at the city end of the freeway from Melbourne airport and gives Melbourne a sense of being prosperous and confident. In Sydney he nominated the late Rayner Hoff's work on the Anzac War Memorial in Hyde Park, completed in 1934 as Sydney's most moving example of publicly visible sculpture. 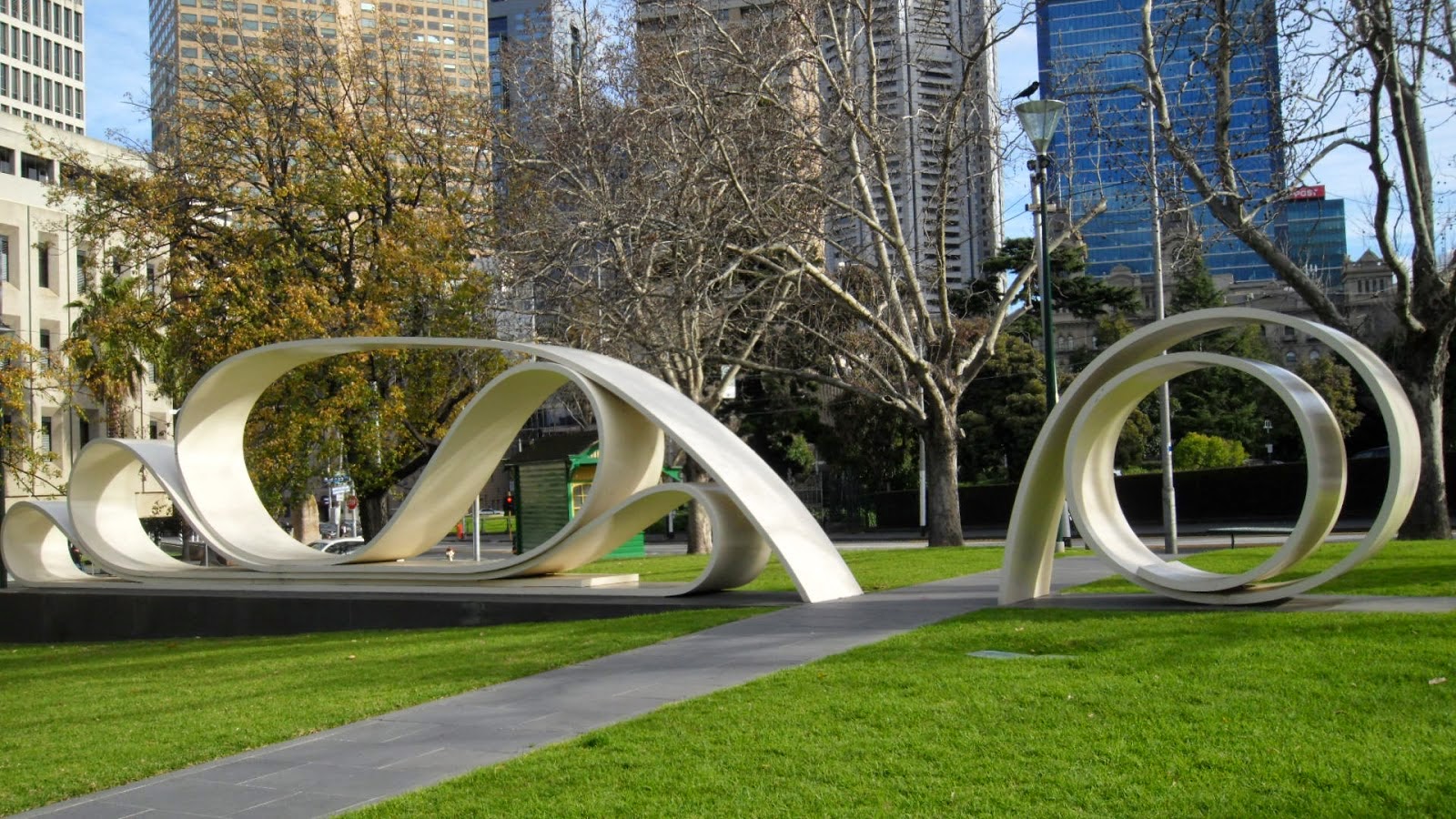 Great Petition, by Susan Hewitt and Penelope Lee, 2008.
As the plaque explains, this first suffragette petition was gathered in Melbourne. The 30,000 signatures were presented to Parliament in Sep 1891.


Melbourne art critic and blogger Mark Holsworth, pointing to the larger Shane Warne cricket statue at the MCG, said Melbourne was still replete with memorials intended to inspire patriotism, whatever that is. Therefore it should be a question of balancing public popularity with artistic taste in sculpture. The sculpture Great Petition by Susan Hewitt and Penelope Lee, marking the suffragette petition for the vote, has three important qualities – it is 1. beautiful, 2. well located on a grassy reserve near Parliament and 3. universal suffrage was historically important to Australia. Clearly some members of the public like to be photographed alongside and on the scrolls.

But Bruce Armstrong's Eagle, on a median strip on Wurundjeri Way, is less successful because Melbournians cannot get close to it. Compare the Eagle’s location to that of Simon Perry's red granite sculpture The Public Purse in the Bourke Street Mall. Public Purse is very successful because the sculpture works as a seat and as a meeting place, and children love it because they can climb on it. Perry's sculptures may not be great works of art, but they are successful public sculptures. 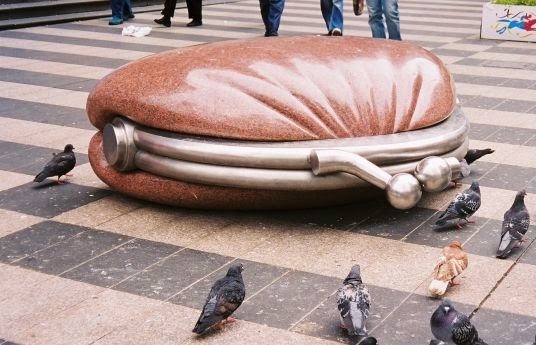 Now Mark Holsworth’s book Sculptures of Melbourne (published by Melbourne Books in April 2015) is due for release. I will be very keen to see how sculpture started in the colony, and to look for changing decisions that altered the public appearance of the city. When Melbourne was established, sculpture was heavily influenced by the colonial legacy of neo-classical bronze and marble statues. From 1980 onwards, the book shows how public sculpture changed dramatic­ally, not only in style but in materials, location and sheer numbers.

The reader will note the shifting trends in public sculpture which moved from a classical style, to commemorative, to a corporate modernist style, to being integrated into urban design, and finally evolving into a contemp­or­ary style, which is non-traditional and temporary. The models for the sculpture moved from historical and religious icons... to literary and social figures. 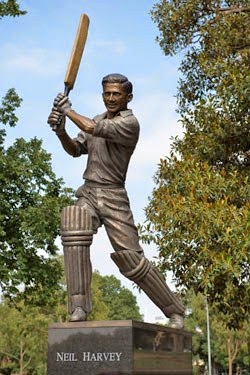 Melbourne (population 4.2 million) is often awarded the World’s Most Liveable City title. So the book will have the task of showing how Melbourne’s collection of sculptures are worthy narratives of place and time; that they have established specific reference points and provided a rich reflection of the history of THIS particular city.

I did not know the name of 'The Public Purse'. It is as smallish work and like many smallish public art works, people like it, especially children.

Hello Hels, I think that public art can alternately (and often separately) serve the three goals Dow mentioned; the problem is when such ideals become prescriptive, and artistic vitality diminishes. The frivolity of The Public Purse would be out of place in a war memorial, but in public spaces there is room for both. (The Simon Perry sculpture reminds me of a couple of huge clamshell sculptures in a waterfront park in Taipei.)
--Jim

I like the sports stars around the MCG. They are the true heroes of our lives, not explorers like Burke and Wills from 1860.

The title The Public Purse is clever :)

I agree that the smaller, less classical, more popular sculptures are certainly going to appeal to young people more. After all, what family would have allowed their children to sit on Queen Victoria's head?

I am guessing that ideals used to become prescriptive because public art was commissioned and paid for by the City Council. And opened by the Lord Mayor in full robes. The public art was most likely to be of royal, historical or religious importance, dignified and almost glorified.

correct. If Australia is a world leader in any particular area, it has to be sport. Everyone will recognise and love the sports stars immortalised around the MCG, so I have added a photo to the post. Thanks.

I have deleted your comments because they don't seem to have much to do with public sculpture or Mark Holsworth’s book, Sculptures of Melbourne.

When I was in primary school, we were taken to the Shrine. The sculpture was designed for a place to remember our war dead. One piece outside was very moving.

I am assuming the war sculpture at the Shrine that you remember was the Drivers and Wipers Memorial. It commemorated the many thousands of Australian lives lost during the fighting at Ypres. The bronze sold­iers were recast by Charles Jagger from the London figures, and shipped to Australia in 1937. It is powerful.

I remember someone instructing me to meet them by the purse, and not having the foggiest idea of what they were on about!
Happy Easter Hels.
DLC

Melbournians almost always say "meet you under the clocks", meaning at the entrance to Flinders St railway station. Imagine if a sculpture became well enough known to say "meet you at the purse" and people nodded knowingly.

What an interesting post! Not being all that familiar with Melbourne's statues, I cast my mind's eye over the Brisbane offerings and realised that there are similar trends here.
From the statues of Queen Victoria, Robbie Burns and politicians of yesteryear to metal kangaroos and pewter hands.
We also have the necessary sports stars immortalised outside Suncorp Stadium.

nod... there are likely to be similar trends in any city that was started in the Victorian era, or earlier. So I suppose each city is going to have to make the same choices... do we want more Burke and Wills/Robbie Burns/Florence Nightgales or do we want "necessary sports stars" and more fun sculptures?