George and Mary Watts: Arts and Crafts in Surrey

I can recognise George Frederic Watts’ (1817–1904) paintings fairly easily, especially as his goal was to represent human emotions in a universal symbolic language. I don’t think it was possible to make emotions universal, but I admired his attempts. In Watts’ long life, his most attractive period was when he came close to the younger art­ist Dante Gabriel Rossetti (1828–1882). Rossetti’s Pre-Raphaelite portraits of women had a richness and sensuousness that Watts seemed to admire.

And I knew about Watts’ most important home - in Kensington, designed for Watts in the Queen Anne revival-style. It was next to the house designed for Val Princep by Philip Webb and next to the house built for Frederic Leighton. Both the neighbours’ houses survive but the local council allowed Watts’ house to be demolished in the 1960s. I hope the councillors rot in hell forever.

The second house was Limnerslease, George and Mary’s country cottage in Compton in Surrey, about which I knew nothing. It was the autumn and winter residence of George and Mary Watts and was appropriately commissioned from the Arts & Crafts architect Ernest George. According to Jeremy Musson, the interior was a masterpiece of Arts and Crafts in its own right – rich and warm, with gleaming copper, Persian rugs, Oriental hangings, oak chests and Damascus pottery. 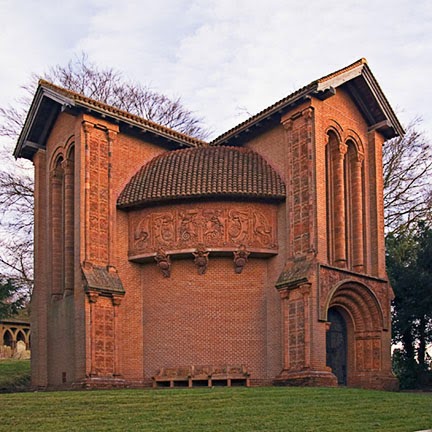 Next to the studio-house, completed in 1891, was a purpose built gallery for the public display of Watts’ paintings and a chapel. It was a unique grouping, providing an opportunity to look into the excitement of the late C19th-early C20th art world, with all its optimism and social conscience. The painter’s Surrey home was to become the hub of the artistic social enterprise that had few equivalents in Europe.

So what did Musson mean by social conscience? The Home Arts and Industries Association was set up in 1885 to encourage handicrafts among the working classes. There seemed to be a Victorian preoccup­ation with social improvement through creative enlightenment, similar to the Victorians’ passion for mechanics’ institutes. When Compton Parish Council created a new cemetery, George Watts paid for the chapel and his wife Mary offered to design and build the new project.

Leading a very large group of passionate locals, The Watts Cemetery Chapel was designed in the Gothic Revival Style and built from 1896 to 1898. The exterior was designed as a stark, round Roman chapel, perhaps based on Holy Sepulchre in Jerusalem. The frieze encircling the Chapel beneath its dome symbolised the Path of the Just. A patt­ern of trees with mice and small animals creeping through its roots and birds of peace perched on its branches suggested the Path, which was divided into four sections – the Spirit of Hope, Truth, Love and Light. 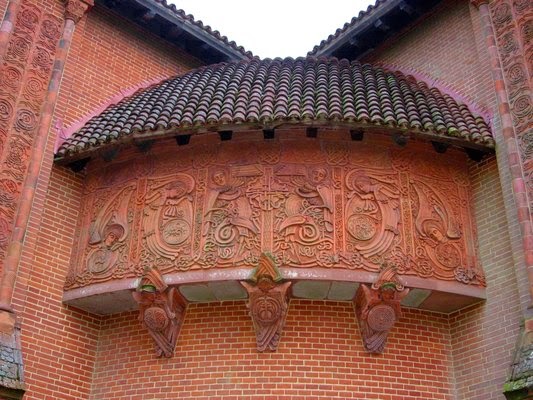 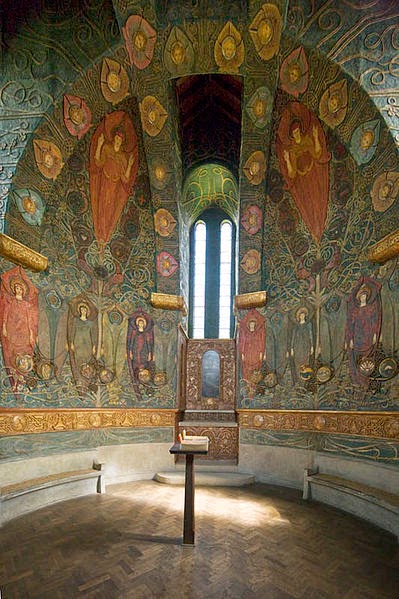 consecrated in 1898 by the Bishop of Winchester
and completed in 1904.


The interior was designed to be very special. The painted gesso decoration depicted an elaborate iconography, detailing every aspect of existence, drawing on all the great spiritual traditions. GF Watts himself painted a version of The All-Pervading for the altar, just a couple of months before his death in 1904. Each member of Mary's evening class had a separate job, and did it well. Musson believed that the 74 local villagers had created an unforgettable monument to the Arts and Crafts Movement and the Home Arts and Industries Movement.   I agree.

Watts Gallery's curator said that the English Heritage listing of the Cemetery was recognition of its very special status as a place where landscape, art and remembrance were blended very beautifully. How perfect that George and Mary Watts were both buried here, as were many other people close to the Gallery at different times over its history. 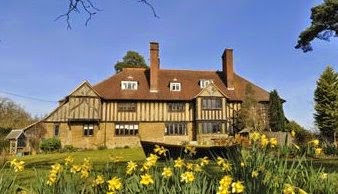 Limnerslease in Compton in Surrey
Designed in the Arts & Crafts style by architect Ernest George
built in 1890-1.

That is the problem with marrying a much younger woman. George Watts died early and didn't have time to enjoy the chapel. Mary lived on for years but it must have been lonely.

Hello Hels, Your councilors will likely co-inhabit the same Dantean circle as the misguided administrators who, while admittedly leaving intact may favorite early 19th century house, razed the beautiful examples on either side, thus destroying all sense of context and village domesticity.

The Chapel looks like late Gothic revival heavily weighted down by the Romanesque. While I appreciate its quality and impressiveness, I find some of its proportions odd, even verging on the unattractive. Perhaps it's a building I need to see in person.
--Jim

The architecture of the house is gorgeous but the chapel is a bit ordinary. I have some suggestions. Firstly Watts Chapel was a community art project instigated by Mary.. in which she involved heaps and heaps of local people. Therefore the architecture had to be simple. Secondly the Compton Potters’ Arts Guild, which produced the chapel’s terracotta, may have influenced the eventual design. The link to Holy Sepulchre in Jerusalem may be the other interesting possibility.

Involving local villagers in the decoration of the chapel was quite inspirational and I should hope their descendants know of their ancestors' contribution.

couldn't agree more. Mary Watts was not just a successful artist in her own right; she took on the responsibility of teaching and of community development in Compton. The Victorians loved self-improvement via adult education.

The chapel is filled with people only for funeral services, but is always open for locals and for visitors.

The couple were wedded to the philanthropic and aesthetic ideals of the Arts and Crafts movement. In an attempt to relieve chronic local unemployment, and fuelled by an idealistic belief in the importance of encouraging creativity in an age of increasingly alienated factory labour, Mary helped to train a number of people in terracotta modelling. She also established a pottery. The Watts Gallery was to be a practical resource for local people.


Mary died in 1938, and by the Fifties the pottery had closed. Over the following decades, as Victorian art fell out of fashion, and as Watts’s own reputation declined, the Watts Gallery deteriorated. By the centenary of the painter’s death, in 2004, the building had become dangerously dilapidated. But a successful campaign was mounted to raise the necessary funds to renovate the gallery – £11million. In 2011, after a 30-month restoration, the work was complete.

Many thanks. Re the terracotta modelling, I have gone back to the post and added a photo of the external frieze. For a description of the panels, see http://diglib.library.vanderbilt.edu/act-imagelink.pl?RC=54358

George Frederic Watts studio in Compton Surrey reopened to the public in January 2016. The studio was of the home and workplace to the celebrated Victorian artist, and his wife, the sculptor, designer and potter Mary Watts. The original collection of paintings was conserved and returned, the highlight being The Court of Death (c1870–1902, Tate), Watts’s last major work.

The studio of Mary Watts has been restored and remodelled to present key objects from the Mary Watts Collection. These include a highly decorative frieze, rescued from the Cambridge Military Hospital Chapel in Aldershot, and now conserved.

Located in the Surrey Hills, a designated Area of Outstanding Natural Beauty, the woodland surrounding the Watts Studios has been carefully restored and replanted.

many thanks. I hope people visit and see the art objects in the very place that the Watts family originally did the work. I must admit that I was/am much more familiar with George Frederic Watts' career than I was about his wife. Oftentimes a married woman's career fall by the wayside or was absorbed into the husband's oeuvre.