Why execute a middle aged nurse, a Christian woman of healing? Edith Cavell.

Edith Cavell (1865-1915) was the daughter of a parson in Norfolk. After inheriting some money in 1895, she spent several weeks touring Austria and Bavaria and accidentally discovered a free hospital run by Dr Wolfenberg in Bavaria. Cavell was very impressed.

Edith returned to her childhood home in 1895 to nurse her sick father. This experience, and her experience in the Bavarian hospital, convinced Edith that a career in nursing was for her. After a few months spent at the Fountains Fever Hospital in Tooting, Edith started nursing training at the Royal London Hospital. A typhoid epidemic broke out in Maidstone in Kent, so Edith went with five other nurses to help. Successfully. Three years later, after completing her training, Edith went into private nursing, gaining experience in pleurisy, pneumonia and typhoid. 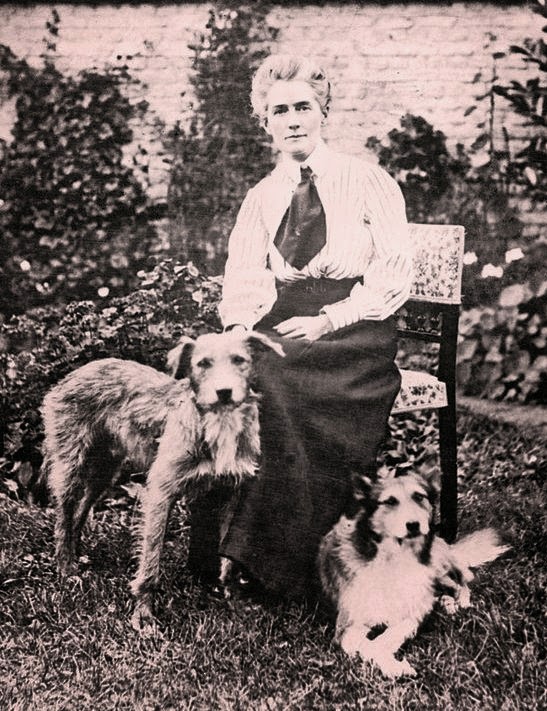 When the war broke out, she was at home in the safety of Norfolk but insisted on returning to Europe. Many dedicated Christians refused to wield guns in WW1, but Edith Cavell was willing to fight in another way. She worked as a nurse in German-occupied Belgium where she helped save the lives of soldiers from both sides!!

After the city of Brussels was captured by the Germans in the first month of war and brought under German military legislation, Cavell chose to remain at her post, tending to both German and Belgian soldiers. Many refugees from all over the country went to the Netherlands, which was neutral, or to France, which was Britain’s closest ally.

By late 1914, many soldiers from the British and French armies were cut off from their units. They hid themselves as best they could, and hoped to escape with the aid of the Belgian farmers, sympathetic towns people or Edith Cavell. Despite understanding clearly that, if she was caught assisting Allied soldiers, she too could be executed, Cavell worked with an underground network. They smuggled Allied patients of the hospital into the neutral Netherlands, and to safety. This informal group smuggled from 200-1000 allied soldiers out.

She was betrayed and arrested in August 1915, only 9 months after the underground network had been established. Except for her detailed confessions, the prosecution would have had no hard evidence that Cavell had personally enabled military escapees to reach the UK. So the Germans were pleased to try her for treason and to find her guilty. Despite appeals for clemency from abroad, she was shot in Brussels in October 1915, aged 49.

Here are some of the questions that still disturb me. Why did Cavell give detailed and accurate evidence against herself? Why was the British Foreign Office powerless to intervene on her behalf? Nurse Cavell was never a spy so why did the Germans gun her to death? Surely they should have allowed her to continue treating seriously wounded German soldiers, as she had before. 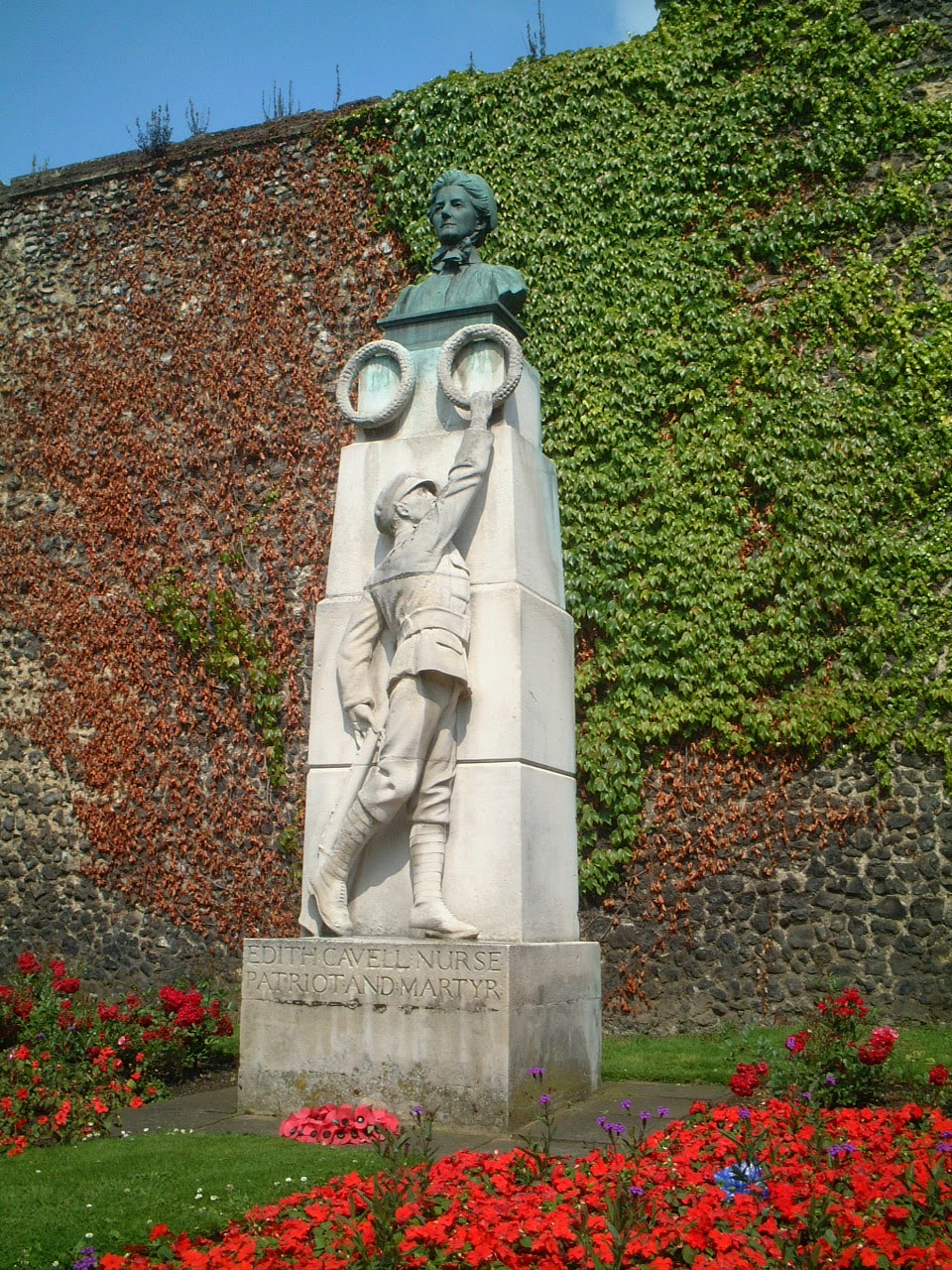 After the war her body was repatriated to the UK (in May 1919) and re-buried in Norwich Cathedral. Beautiful and imposing memorials were erected in Norwich, Brussels, London and other places around the world. 100 years later Edith Cavell was featured on a new commemorative £5 coin, marking the centenary of WW1.

There is a touch of the Florence Nightingale story in the themes of Christianity and nursing, and there are also reminders of Joan of Arc in Cavell's service to nation "at any cost". Readers might like to read Dictionary of National Biography Archive - its biography was published in 1927.

Hello Hels, Edith Cavell seems like a uniquely dedicated and noble individual, and her story also reminds us of those who at great personal risk later helped people escape from the Nazis. From the information you give, it does seem strange that the Germans would have insisted on such a summary execution--perhaps there is part of the story that has not been told. Also, we would have to know more in general about German executions for treason, and when if ever they were willing to mitigate their sentences.
--Jim

Belgium was under German military law during the war so to that extent, the German courts were acting perfectly legally. Treason, defined in this case as "conducting soldiers to the enemy", was certainly punishable by death!

But what happened to the Geneva Convention protecting medical civilians who were providing care to the wounded?

Every time I hear of the Indonesians preparing to execute Andrew Chan and Myuran Sukumaran by firing squad, it reminds me of Edith Cavell. Despite all the nations of the world trying to prevent the execution of these Australians citizens, it appears as if Indonesia will go ahead anyway. Likewise Edith Cavell's life was never going to be saved.

I should think her crime was viewed very seriously and there was really no other road to go along. Maybe her confessing lead to some others being saved, or she took responsibility for things she did not actually do. At least she is appropriately commemorated.

I have been very impressed with how the Brasilians and Dutch have withdrawn their ambassadors from Indonesia and I hope Australia does the same thing, if the firing squad goes ahead. It is outrageous when a nation executes civilians from another country. Why not give life sentences to the men with drugs in their undies? Or deport them back to Australian gaols?

Edith Cavell was a civilian but that didn't protect her from capital punishment either :(

until you mentioned commemorations, I hadn't been quite aware of exactly how many cities and countries erected statues, plaques and stained glass windows in Cavell's memory. See http://peace.maripo.com/m_cavell.htm

And another thing I had not been aware of - hospitals, nursing colleges and nursing scholarships named for Edith Cavell.

An interesting and thought provoking post. I do wonder, like Andrew, if Edith Cavell took everything upon herself so that others were saved.

I remember the story of Margaret Clitherow (the Catholic martyr of Elizabethan times) refused to plead (and as such suffered a horrific death) so that her servants and children would not be called to testify.

I am not sure if it is true or a pious legend but I did read where one of the firing squad refused to raise his rifle at Edith Cavell's execution and was himself executed by his commanding officer.

When I was reading about Cavell's last days of life, I too was struck by the sense of faith and even martyrdom in her language. Not to protect other people but to fulfil her religious beliefs.

Speaking to the Anglican chaplain who had been permitted to give her Holy Communion, she said: "Patriotism is not enough; I must have no hatred or bitterness towards anyone."

To the German Lutheran prison chaplain, she said: "Ask the Anglican chaplain to tell my loved ones later on... that I believe my soul is safe, and that I am glad to die for my country."

She was governess at Keswick New Hall for a time in the mid 1880s and was affectionately remembered. Then when Edith was left a small legacy, she decided to spend it on a Continental holiday. She spent some weeks in Austria and Bavaria, and was deeply impressed with a free hospital run by a Dr Wolfenberg. She endowed the hospital with some of her legacy and returned with a growing interest in nursing.

In 1890, Edith took a post with the Francois family in Brussels. She stayed here for five years and became a firm favourite with the family. She continued to paint in her spare time and became fluent in French.

1895 saw Edith’s return to Swardeston to nurse her father through a brief illness. He remained Vicar until his retirement in 1909. Helping to restore her father to health made Edith resolve to take up nursing as a career. After testing her vocation for a few months at the Fountains Fever Hospital, Tooting, Edith was accepted for training at the London Hospital in April 1896.

I was trying to find out how the memory of Edith Cavell has been kept alive since 1915. Many books have been written about her, plus films and plays. Sybil Thorndike starred as the nurse in the silent film Dawn in 1928 (even though the film later was censored and almost banned!) Anna Neagle played the same role in Nurse Edith Cavell in 1939. Joan Plowright played Cavell in a successful play on the London stage in the 1950s.

After the Germans had shot Edith Cavell for treason in Oct 1915, MI5’s suspicions about Mata Hari led to her subsequent arrest in France. But whereas Edith Cavell's execution led to worldwide outrage, few people in Britain had much sympathy for Mata Hari. The death of the spy evened the score in British eyes.

Thank you. I didn't realise quite how involved MI5 had been in Mata Hari's case.

Of course the Edith Cavell tragedy had nothing to do with the other case, but the timing was too close not to influence the general public's opinion. Not true but pursuasive.