Under the Empire Settlement Act of 1922 and 1937, the British Gov­ernment formally assisted private organisations to help people who wanted to settle in His Majesty’s Overseas Dominions. Most were adults.

What happened to the children? The Fairbridge Plan for caring for British child migrants originated with Kingsley Fairbridge’s Vision Splendid. He loathed the conditions of the thousands of under-privileged children with no future other than poverty. He wanted to transplant such children to the wide-open spaces in the colonies; the crowded orphanages were very happy to send their charges overseas.

For their part, the Australian and other British Empire governments hoped these schemes would supply them with much needed population and labour. They could have imported cheap labour from any country, but they wanted sound, British stock. "This programme is not a charity", declared the Prince of Wales in 1934 of the work of the Fairbridge farm schools... "it is an Imperial investment". These child mig­rat­ion schemes must have been seen to be successful; they received poor publicity from the outset, yet they continued until the 1960s.

But war time was different. The book Oceans Apart, written by Penny Starns and published by The History Press 2014, showed that from May 1940 many British parents und­erstood that their cities could be bombed to smithereens. Wise parents chose to move their children safety abroad to the British Dominions. As a result the Children's Overseas Reception Board (CORB) scheme was extremely popular, and 200,000+ applications were made by the time the scheme closed just four months later. One third of the CORB children were Scottish, one third were Welsh and the rest were English.

Was sound British stock still a criterion in WW2? The book discusses eugenicist views in Britain which the CORB programme assiduously tried to avoid. But the Dominion States decided on their own rules – South Africa refused to accept any Jewish children; a colour bar was in operation in all the host countries; the number of Catholic children was restricted; and children with any medical defects were excluded. German, Austrian and Polish refugee children, desperately trying to survive the war in Britain, were universally rejected by the CORB programme. 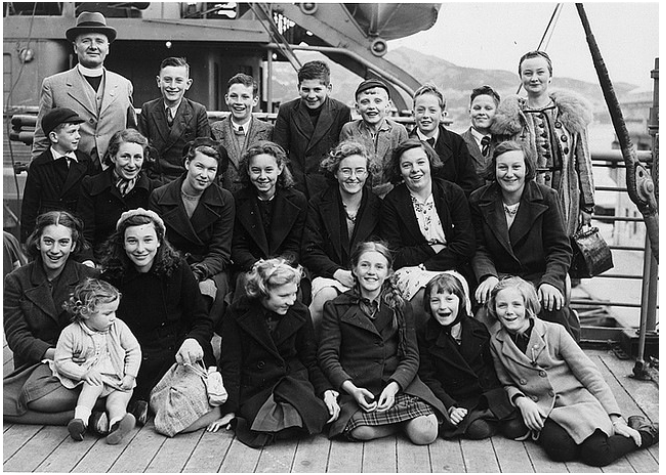 
CORB packing lists were sent to British parents in 1940, to prepare for the evacuation of their children overseas. Host families in the new countries were given a list of guiding principles. The BBC agreed to support parent-child links with their regular Director of Empire Programmes.

Saying goodbye at the port was heartbreaking. When parents accomp­an­ied their children to the port, neither generation knew if they would ever see each other again. Singing patriotic songs loudly might have reflected the mood well, but the songs left the families emotionally exhausted. And the photos in the book evoke an optimistic experience that was also full of loss and heartbeak.

On at least one occasion the ship never made it to the Dominions. In Sept 1940, the ship SS City of Benares was torpedoed by a German U-boat en route to Canada. Carrying 406 passengers and crew including CORB children and private evacuees, the ship sank in the freezing waters of the North Atlantic and 256 passengers died. Wherever possible, the adults onboard sacrificed their own lives in order that the children could get safe seats on the life­boats.

After the City of Benares went down, attempts were made to resurrect the CORB scheme, but by March 1941, British parents were not prepared to risk another catastrophe. In total 2,863 British children had safely arrived, half of them to Canada (1,523), and the rest to Australia, South Africa and New Zealand.

I was not surprised that the old British Empire nations rallied to help the children. One would expect Canada etc to want to help the motherland, and would want to bring in good quality children to per­haps make their future homes in the ex-colonies. But one might not have expected the USA to feel very connected to British children. No CORB children were sent to the USA but welfare agencies in the USA organised private evacuations. Huge companies like Kodak and Ford also participated. 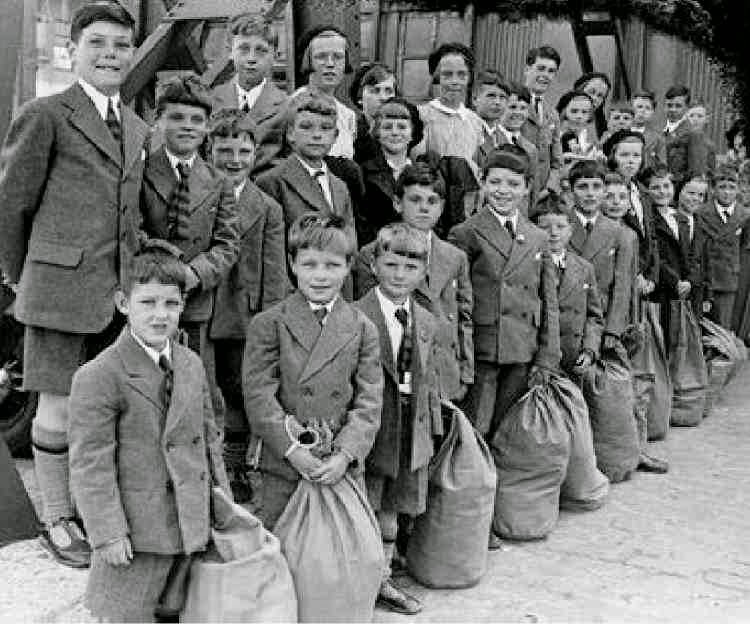 The book discusses at length what happened to the children, once they landed. The British government paid for the ship fare but it was up to the host nation to feed, clothe and house the newly arrived young visitors. Some were adopted by warm, loving host families, especially when the host families were already related to the sea-vacs. But if perfect strangers took them in, the Australian government paid finan­cial support to the foster parents while the Canadian government did not. No doubt that homesickness was an issue for all the children, so there was an urgent need to stay in contact with their parents back in the UK.

Some private sea-vacs met with hostility. In Canada in particular it was felt that these arranged evacuations were enabling the wealthy and educated classes to save their own sons from fighting in the war. But since the children were all under 16, this sounds far fetched to me.

But the decision to go home at the end of the war created mixed emotions. Some of the older evacuees even chose to remain in their new homes and not return at all. Others went back to the UK, but app­lied to return to their host nation as adult migrants, or encour­aged their entire families to emigrate. Even those CORB evacuees who rushed back to their parents as soon as possible might have had some trouble settling down in post-war Britain. The youngest of the CORB children certainly had learned to speak with foreign accents during their years away.

By February 1946, most sea-vacs had arrived back home in the UK.

What an extraordinary story. So very sad in many ways but also a reflection of the lengths that parents were prepared to go to for a better life as they saw it for their children.

And, one can imagine the range of emotions at the end of the war about whether or not to return. The stories of these children must have been rollercoasters of feelings as indeed the whole world had changed in so many different ways by the end of the war.

Hello Hels, It is good to know more facts about the wartime children. The British refugee/evacuee children were a big part of the war in the U.S., and figure deeply in the memoirs and movies of the period. In the reminiscences, such as those of Dorothy Rodgers, the children, often previously acquainted, are a delightful addition to the family, and later were sent back with reluctance. Novels and movies often took a humorous view, with the originally-pitied children turning out to be unmanageable brats.

Louise Kent's experience echoes your final comments. She offered to take her English niece for the duration, but her aunt decided to tough it out at home rather than risk her daughter catching the American accent!
--Jim

Eugenics was a very nasty science. Hard to believe the British Dominions still flirted with eugenics as late as 1940.

You always make me feel terribly ignorant. I have said it before and I repeat myself, I did not know about this at all. I know about more permanent migration during the war years. Was it a good idea? Homesickness for a child can be a horrible thing. Give me land, lots of land and wide open spaces may not have been appropriate for English children.

*nod* I cannot imagine having to make a tougher decision - to keep the children at home and risk the certain bombs, or to send them away and risk the probable German U-boats.

What would any of us have done, given those choices?

I wish I had read/seen any of the books or films you refer to. The Penny Starns history is excellent, but it is not really personal.

I was going to leave the eugenics issue out of my review because it leaves readers feeling incredulous. In the middle of the most devastating war in history, it is difficult to think that British Commonwealth countries wouldn't take children because of their religion, colour or medical condition!!

But Starns had a full chapter on "good British stock" and I couldn't ignore it.

I had never heard of the CORB Scheme either... until last year. I was examining the Fairbridge Plan for Britain's child migrants and accidentally came across the name Geoffrey Shakespeare!! He was the Secretary of State for Dominion Affairs and father of the CORB Scheme.

many thanks for the chapter of A Personal Book by Dorothy Rodgers (1977), written through the eyes of a loving foster mother-relative.

Interesting that you noticed the issue of integrating different standards with American children. The CORB designers were blocked by parliamentarians from using the USA because "American children were spoilt, rude, arrogant, ill-disciplined and loud. American mothers were lazy, materialistic and vain; gossipy women who were totally lacking in child-rearing skills".

They weren't keen on sending children to Australia either because Australia had been first and foremost a penal colony until the 1840s and they were not going to have British children "living with a bunch of convict descendants".

rotten things happen to some children and I hate to read any of it, but your post made me think of ABC Chairman David Hill, who I recalled as a wartime child Evacuee, so went to the wiki for him and it is a most informative browse.
Thanks again, you always lead me to new information.

Oh yes! I too read the David Hill material at the Migration Heritage Centre in Sydney. He was born after the war and spent years in a crowded Dr Barnardos facility in the UK before emigrating to Australia in 1959. When I wrote about the Fairbridge Plan in this post, I had no idea that David Hill had lived a Fairbridge farm in New South Wales for 3 years.

Part 2 of Children as collateral damage in Wars: because I met one of them in 1969 I know the 1939 Vienna Boys Choir was stranded in Perth. He managed to survive isolation from parents and become a significant part of musical history in Australia affecting my own life enormously.
more of the story

Thank you for that reference. People were very generous, opening up their homes to these young lads from Vienna. And so they ought to have been. They were just children!!

But I was caught unawares when that _October 1939_ newspaper article noted what the director of the Viennese boys' tour said: "his experiences proved the value of the suggestion made in the Argus that British children should be given sanctuary in Australia during the war." The Argus' thinking was ahead of its time.

If only Australia and other British nations would have taken at-risk children from Britain, whatever their parents' nationality.