Michelin Tyre Company started operating in Clermont-Ferrand in France in 1889. Art Nouveau architects perfected their style during the 1890—1910 years. Exactly in that era, in 1894, Monsieur Bib­end­um became the advertising symbol of the Michelin tyre company, introduced at the Lyon Exhib­it­ion where brothers Edouard and Andre Michelin ran a display pavilion. As the photo suggests, Bibendum’s shape was a salute to a stack of tyres. 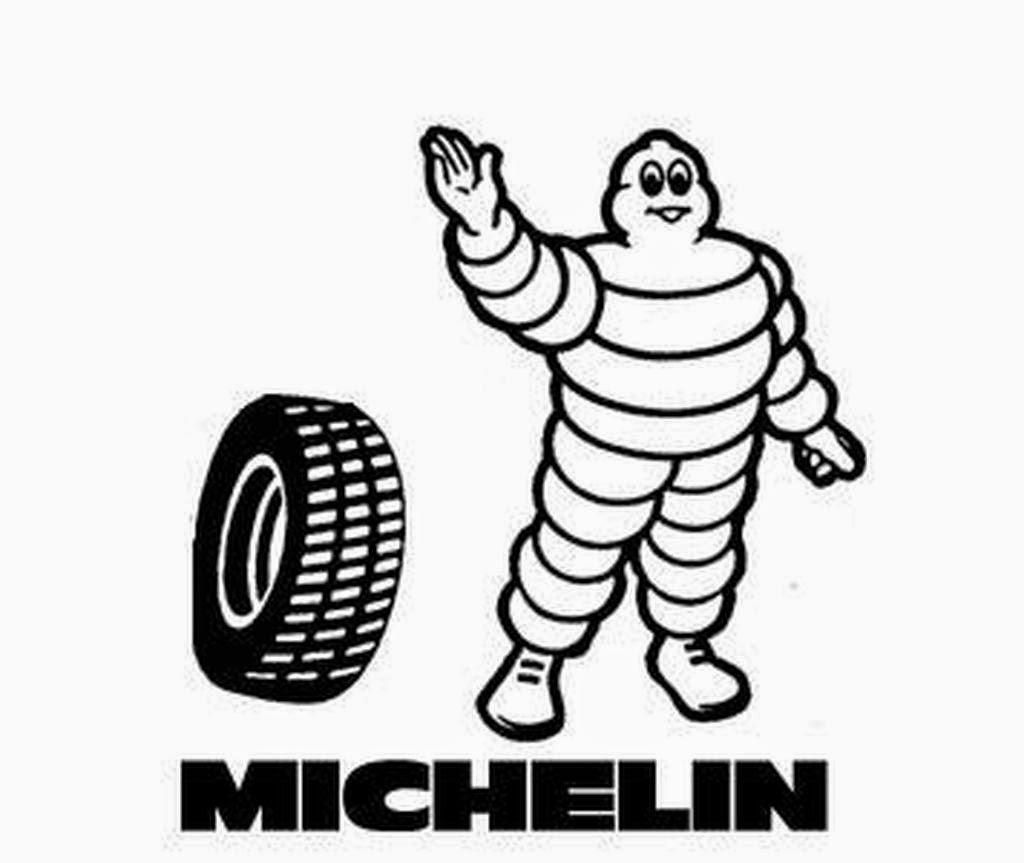 In might have taken a few years to get to London but already by 1909 the planning for Michelin Tyres’ Fulham Road building in Chelsea had started. I imagined that the company would have wanted to make an enormous impression on the British public but the new architectur­al plans were actually drawn up by an employee of the company, François Espinasse of Clermont-Ferrand. He was neither an architect nor an engineer!

The two storeys, made from ferro concrete and brick, were faced with glazed terracotta. From start to finish the building took only six months to complete and was officially opened in January 1911 in the presence of André Michelin. opened for business in January 1911


Art Nouveau taste was everywhere! As part of the three bay front, the ground floor was divided by ornamental piers and ornamental ironwork. On the inside and outside walls there were 32 ceramic tile panels which showed scenes from Michelin’s hist­ory: the early history of motoring, famous racing cars of the time and the first pneum­atic tyres used on a horse drawn carriage.

The building had 3 large stained-glass windows on the front elevation, based on Michelin advertisements of the time and all featuring the Michelin Man. The windows portrayed Bibendum as a kicking boxer; he could cycle whilst smoking a cigar. The Michelin company’s close association with road maps and tourism was represent­ed by a number of etchings of the streets of Paris on some of the first-floor windows.

The building offered everything the pre-WW1 motorist could have required. Fitting bays at the front of the building allowed motorists to have their tyres changed by Michelin fitters, using the stock stored in the basement. At the left of the front reception, a Touring Office provided maps and route itineraries. The floor inside had a mosaic showing Bibendum holding aloft a glass of nuts and bolts. 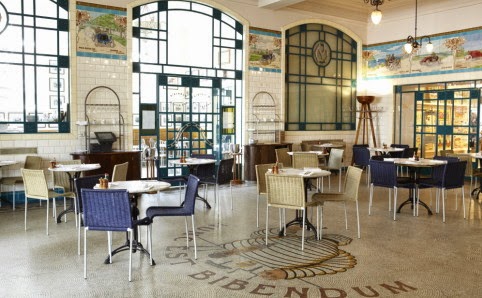 In April 1969 the original front section of Michelin House was given a Grade II listing. But why did Michelin move out of the building in 1985? It was bought by restaurateur/designer Sir Terence Conran and publisher Paul Hamlyn. They embarked on a major redevelopment that included the restor­ation of some the original features. The new development featured offices for Hamlyn’s company Octopus Publishing, as well as Conran’s Bibendum Restaurant & Oyster Bar, and a Conran Shop. All three businesses re-opened in 1987.

Some have concluded that Michelin House remains one of the most recognisable buildings in London, and a fine example of French architectural craftsmanship, unusual for the British capital. It certainly is still easily recognised, 100+ years after being built.

Examine the Royal Automobile Club of Great Britain, while we are on cars. The club's headquarters first opened in 1897 and moved to Piccadilly only five years later. I am assuming it was King Edward VII's interest in motoring that led to new membership and new facilities. In 1911 they moved to the current address, the ex-War Office in Pall Mall, with its architecture in the late French Renaissance manner. The new club interior was designed in the grand style by the architects of The Ritz, Mewes and Davis, and furnished by imported French sculptors and craftsmen. 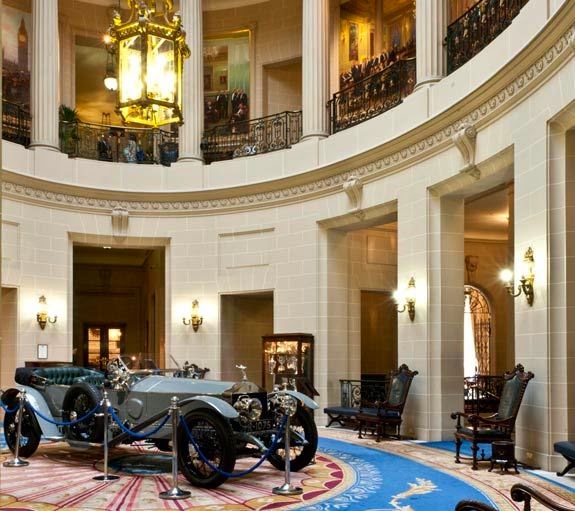 The swimming pool, rifle range, shiny mosaics and Turkish baths were said to be inspired by King Louis XIV, giving fin de siecle opulence for a hedonistic age. But were the designers of the Royal Automobile Club actually influenced by the Michelin Tyre Company which had so recently opened for business in Fulham Road?  The dates were persuasive and so was the desire for French grandeur.

The 'Michelin' building is a favourite of ours in London. A somewhat whacky mixture of Art Nouveau and advertising images that certainly continues as a landmark until the present day. We can well remember the 'Michelin Man' and, indeed, often refer to people dressed in these bubble outdoor coats as contemporary look-alikes.

Wishing you and your family all peace, joy and prosperity for the coming year. Thank you for the kind messages which you have left for us.

Hello Hels, I never knew of this great building, or I would have made time to visit it on one of my trips to England. The Michelin buildings displays a rare balance of fun and elegance that is hard to achieve without tipping to one extreme or the other, ending up with something that is either stuffy or looks like a roadside attraction. The key is to possess that ever rarer quality, a corporate sense of humor.
--Jim

Michelin is the biggest tyre manufacturing company world wide. They must have been doing something right for 110 plus years.

Spouse and I know the City and the NW suburbs very well, and all of Herts. It is very easy to recognise architecture from the Georgian, Victorian, Arts and Crafts, Edwardian, Art Deco etc eras.

But clearly I was not familiar with Fulham. So it would have been a bit tricky describing that unusual mixture of Art Nouveau and advertising images. I had to have a blogging friend show me around!

*nod* I have vastly under-displayed the large size and the impressive interior decoration of the Royal Automobile Club. I will add a photo of the fabulous dining room.

The goal was to provide _every_ service that the elite car driving population could possibly need. So yes...it would have been very easy to tip into a Frenchified, advertisement-filled roadside attraction. Even today, the Michelin facility still stands out from all the surrounding buildings.

Their own history is ambitious! "1889 was the year when the Michelin brothers, André and Édouard, embarked on a great human and industrial odyssey to develop modern transport solutions – the key to freedom and economic development - through ceaseless innovation."

And not just in France, as we can see. The company actually established its first foreign plant in Turin in 1906, then London and then the world. Their history of innovation is fast moving.

My father was a fan of Michelin tyres, as I now am. It is indeed an instantly recognisable building and I would rather like to see it in person one day.

amazing what we pick up from our parents, and what stays with us decades later.

I would not have known the first thing about tyres except 5 of dad's siblings shared and ran a tyre sales business in the 1950s and 60s. Thank you for digging out a piece of family history that I haven't thought much about... till today :)

Gosh, how did I not know about this building? I'm going on a second Art Deco tour of London in two weeks but I can see that I am going to have to devise (or find) an Art Nouveau tour. The Fulham Road property is exquisite. I'm not sure I'd be able to stop photographing it.

agreed. To my eyes, Michelin House looks very unusual and unmissable architecture. And that it wasn't pulled down decades ago is remarkable.

Is there an established Art Nouveau Tour that you know of? I haven't been on one, but I honestly have never looked before.

What you're saying is completely true. I know that everybody must say the same thing, but I just think that you put it in a way that everyone can understand. I'm sure you'll reach so many people with what you've got to say.

Bibendum and the Conran Shop are favourite ports of call when we are in London. I never knew the history, so it is most enjoyable to read it here.

The RAC is also known to me, and I think the swimming pool is one of the great hidden architectural beauties of London.

welcome to the blog. I assume you love art nouveau architecture.

you ARE an observant traveller. I only have four weeks of travelling a year and I try to squish too much in. I wonder if the book Esoteric London by Roger Dean has these and other slightly hidden gems.

because of Conran I knew of the Michelin building but the elegant RAC place is thrilling news. How divine to think of the days when it was 'motoring' in gauntlets with knee rugs, a wicker hamper strapped to the back, and nothing to do with traffic jams and kids in capsules. thanks for the enlightenment.

my new distraction from Real Life is Rich Kids Instagrams and here is one of them in a beautiful old car and bragging that he has several others - worth the clickthrough - struggling with life after Rosey.

I am quite happy for people to repurpose old buildings, as long as they stay in the spirit of the original architect and don't make it look like a tacky fast food shop. But it is such a tricky balance. Terence Conran and Paul Hamlyn were very aware that they needed to restor­e as many of the original features as they could.

I didn't see the building pre-renovation, but I can easily imagine those excited early motorists who saw the world as their oyster :)

I don't get excited about cars, vintage or otherwise. But my husband thought that burgundy car was sublime. He has just rushed out to buy a Burberry motoring coat :)

Nice post.Now a days automobiles are becoming one of the most needful things in our life.Shree Tyres providing best Michelin tyres in Pune for your automobiles.For more detail visit Shree Tyres or contact 8055678063.

Thank you. Have you seen the original Michelin Tyre Company in London? Have you incorporated any of its design features into your company?