Peekskill is in Westchester County New York. The town is on a bay alongside the Hudson River, not the sort of place I, a non American, would have selected for a pro-right wing, anti-black riot. But the population of the Westchester Hudson River communities was mixed. On the one hand, there were the summer people and weekenders, many of whom were middle-class, Democratic Jews. On the other hand, there were the year-round residents, more working class and conservative, whose open hostility to the summer people had been steadily growing.

Singer Paul Robeson (1898–1976) was the most internationally famous African-American performer I can find, at least before and immediately following WW2. He wanted to arrange the concert in late August 1949, in aid of the Civil Rights Congress. But the performance had to be called off when the audience was attacked and Robeson was lynched in effigy. The police did not stop the mob.

Robeson had already performed at three successful concerts in the neighbourhood without a right wing, racist backlash. So what went so badly wrong now? Robeson had four fatal flaws that drove the racists into a frenzy – he was a champion of civil rights, he was anti-war and he called for the decolonisation of Africa. Worst of all he was endless grateful to the USSR for providing more soldiers, and suffering more casualties, to fight the Nazis than any of the other Allied Nations. 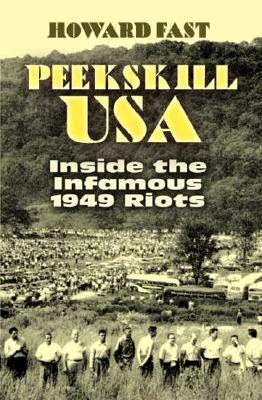 By Jan 1942 the USA had agreed to fight with the Allies in WW2, but African-American integ­ration into the armed forces remained problematic. After the war, much of the country remained segregated. And when racism was mixed with virulent anti-Communism, the hatred was intense.

Once news about the August concert being cancelled was circulated, trade unions decided that they would ensure the next concert would go ahead - an open-air concert in Lakeland Acres, north of Peekskill, in September 1949. And so it happened. 25,000 fans made it to the open-air concert and 2,500 trade union members formed a human wall to ensure the concert was not interrupt­ed.

Plus several thousand American Legion members and other right wing demonstrators stood in the road yelling against communism and against blacks. They might have spewed verbal filth at the concert-goers driving to the performance space but they could not stop the concert. And I could see no mention of the Ku Klux Klan's presence before the concert. 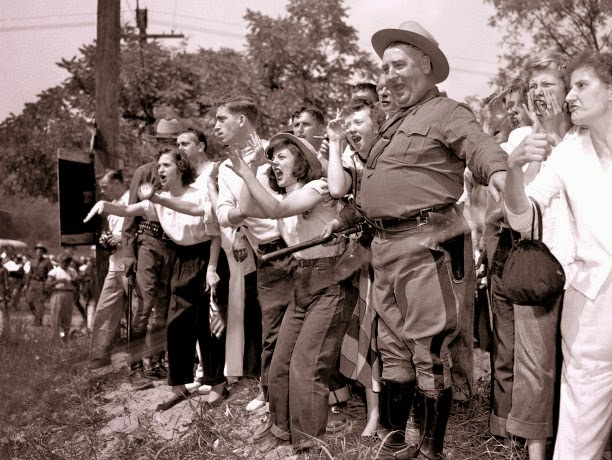 The mob increased steadily. Only when the concert ended in the late afternoon did it become clear that Ku Klux Klan and the police had walkie-talkies all through the woods, surr­ound­ing the area like a battlefield. As cars and buses started to depart from the concert grounds, police directed the veh­icles through the northern Westchester woods and up a steep, winding road. There, crowds of men were waiting. Cars were hit by a hail of stones and rocks, which had been stockpiled by rightwingers on the roadside. The vehicle in which the singers Woody Guthrie and Pete Seeger were travelling had windows smashed; other concert goers had their cars overturned. The concert goers, artists and organisers were valiant, but by the time the evening was over, Robeson’s supporters and defenders were injured.

Local residents estimated that 80% of the Robeson concert-goers were Jewish. So the pro-Fascist mobs screamed: “We’re Hitler’s boys — here to finish his job.” The violence overflowed even to people who had not attended the concert. Some racist locals noticed a bus of blacks travelling along the highway, on their way back to New York from a field trip to visit the Roosevelt home in Hyde Park and attacked it violently. The police did nothing.

The sym­bol of the Ku Klux Klan, a burning cross, was meant to put fear in the hearts of blacks across the USA. After 8 PM that evening, the attackers burned a huge cross on the picnic grounds. KKK leaders said that the Peekskill violence was “only the begin­ning. The crosses will begin to burn north of the Mason-Dixon Line tonight… as soon as the order gets through.” On the very night of the Peekskill concert, six burning crosses appeared in Tallahassee. Each cross had a sign on it: “We protest Paul Robeson and Communism.” 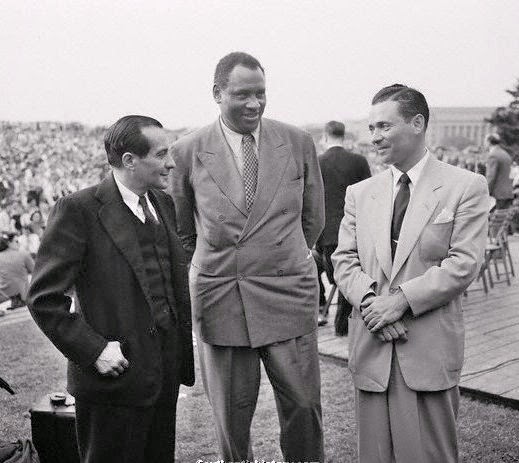 South of Peekskill, the rock-throwing continued in Buchanan, Montrose and Croton along Route 9 as the smashed cars and buses headed back to New York City. The tally of injured was 145, including concussions, smashed faces, injuries from flying glass, broken bones and crushed fingers.

Only 12 anti-Robeson protestors were arrested; five of them pleaded guilty to minor offences. I was expecting charges of vandalism, crim­inal assault, uttering terrorist threats.. but no. The Peekskill mayor, John N. Schneider, said the responsibility “rests solely on the Robesonites, as they insisted on coming to a community where they weren’t wanted.” Numerous civil lawsuits were filed on behalf of groups of victims; none were successful.

Within days, a wave of hatred and panic spread through northern Westchester. Signs and bumper stickers appeared eg “Communism Is Treason. Behind Communism Stands — the Jew! Therefore, for my country — against the Jews!” Many Jewish, black and Democratic vacationers and weekend visitors went back to New York, abandoning their holiday homes because of the terror campaign. The remaining summer colony organised a round-the-clock vigil against outside attack.

Westchester County might well have anticipated the anti-Communist witch hunt which was soon to flourish under Senat­or Joe McCarthy. But there was no causation. Within a few months of the Peekskill riots, McCarthy raised the spectre of Communist infil­tration into the State Department. Democrats, intell­ect­­uals, Jews and Hollywood heroes were targeted. Paul Robeson was blacklisted, his concerts and recording contracts cancelled, and his passport revoked - his brilliant career was over. Pete Seeger and his group The Weavers (Lee Hays, Ronnie Gilbert and Fred Hellerman) were soaring up the charts with their music. But because they were pro-Jewish and pro-blacks, they too were placed on a broadcast blacklist as suspicious radicals and were placed under FBI surveillance.

It was not until the end of 1954 that McCarthy’s terror campaign was finally discredited, but by then lives and careers had been ruined. The Blacklist remained in place till 1960 and the repercus­sions lasted for decades.

It was an extraordinary time in America. I wasn't aware Paul Robeson was an activist. One thing for sure, it is pretty hard for the US to lecture us about our less than glorious treatment of our native population.

the first time in this blog I referred to Paul Robeson's bravery and activism was the exhibition of German art in London, called "Banned German Art". It was organised to protest Munich’s 1937 Deg­enerate Art Show. But before the show opened, the name was changed to the less provocative title, "C20th German Art", at the exp­ress command of the British Foreign Ministry. Clearly the officials didn't want to offend Nazi sensibilities :(

Robeson opened the show with his music at the New Burl­ing­­ton Gall­eries London in 1938. Robeson tackled the German Nazis and the British Foreign Ministry head on!

He really is worth learning more about.

My uncle and dozens of his friends went to ask the Governor for some justice over their destroyed property. Gov Thomas Dewey would not even allow the men in the front door. Of course the civil law suits were going to fail.

Yes indeed. Well worth your effort.

Also have a close look at the risked careers of the other heroes at Peekskill - Pete Seeger and Lee Hayes, as mentioned. And examine the novelist Howard Fast who wrote the definitive eye-witness book about the riots. The House Committee on UnAmerican Activities immediately moved on Fast and kept him in gaol/under control until the blacklisting period ended.

Thomas Dewey would have been the _last_ person on earth to help the blacks, Jews and unionists get justice :( After the riots, he was forced to establish a commission to examine the "incident at Peekskill". The commission whitewashed the police and KKK's violence, and blamed the concert organisers and conert goers.

The whole story is sad, but to see the vileness of the demonstrators just makes me shake my head. I wonder, do you suppose any of the protesters ever looked back with embarrassment over how they acted?

Interesting point. Is it possible that the locals were normal people who disliked blacks, Jews and unionised workers, but didn't intensely hate them?

As World War 2 ended, right wingers had to find a new, bitter enemy to kill i.e the communists. I can imagine the KKK and other hate groups whipping up a frenzy of fear against people who supported equality between people, especially if they were black, Jews, academics or unionists.

Now you will have to have a look at the Red Flag Riots in Brisbane, straight after WW1 ended. British Australians behaved appallingly towards Russian-born Australians.

Great article, Thanks for your great information, the content is quiet interesting. I will be waiting for your next post.

this is a rather tragic story *nod*. Alas I have a very similar story in Australia, scheduled for publication in early Feb. We humans never learn :(

Helen,
look what I found.
A Tribute in Story and Song to Paul Roberson is being held at Toorak Uniting Church in Toorak Rd Toorak on Friday 9th October and Sunday 11th October 2015. It will feature Desmond Lukey and live orchestra, with interludes from Porgy and Bess.

Thank you. The 3MBS page said similar: "An account of Robeson's outstanding but politically harrowed life, interspersed with songs that are the heart of his legacy, presented by Desmond Lukey. Robeson has been described as one of the great renaissance figures in American history but due to political issues, his wider legacy has been largely concealed."

I wonder why no-one mentioned the tribute performance before.