Some critics have called the 2013 film “The Lunchbox” a romantic comedy, but I am not sure that there was much normal romance.. nor was it intentionally comic. Nonetheless I loved the film, which was directed by Ritesh Batra.

This very restrained, understated story was set in Mumbai, surely the most noisy, crowded and unrestrained city on the planet. I imagine that Greater Mumbai (pop 21 mill) was chosen ironically, given that both leading characters were desperate for ANY genuine, human interaction.

Saajan Fernandez (played by Irrfan Khan) was a lonely widower about to retire from the accountancy job he had done for all his adult life. His job was important, but it must have been boring and endlessly repetitive. Ila (played by Nimrat Kaur) was a young wife and mother who wanted to excite her husband again. The elderly neighbour, who lived in a flat upstairs, was full of information on how young Ila might improve both her recipes and her sex life.

Having set the scene, the film moved to a very Indian part of life. There are 5000 dabbawalas-lunchbox couriers in Mumbai each day, men who pick up hot lunches packed in thermos containers and carry them from the worker’s home to the worker’s office. One of these Mumbai dabbawalas made a mistake! Instead of Ila’s beautiful lunch going to her own husband’s desk, it was accidentally delivered to the lonely widower Saajan’s desk. 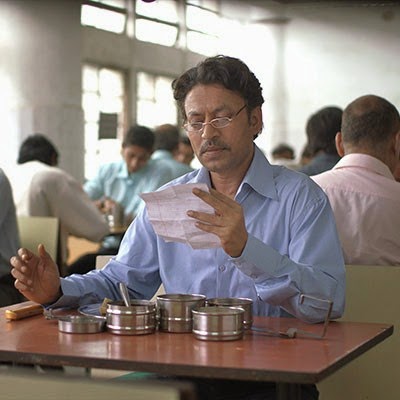 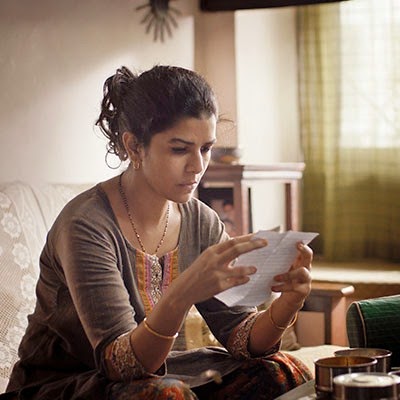 Saajan (above) and Ila (below) with their letters and food containers

When the lunch containers were deliv­er­ed back to Ila totally empty, she was very happy, thinking her husb­and must have really enjoyed her cooking. When she questioned the husband, he was distracted and did not want to talk to her at all, let alone chat about hot lunch and thermos containers. Realising the mistake of the delivery, Ila popped a note in the thermos flask to the unknown recipient of her lunch, thanking him for enjoying her food. Saajan replied and so an exchange of the messages sent back and forth improbably started.

Not the most earth shattering mystery ever to be solved in human history! Had Ila’s husband not been ignoring his own family to chase a perfumed bimbo, and had Saajan not been facing a miserable lifestyle of lonely retirement, the film might have ended there.

Meanwhile other characters emerged in Saajan’s and Ila’s lives. A new young employee, Shaikh (played by Nawazuddin Siddiqui) was going to take over Saajan’s job, so there was the question of training and preparing for the changeover. Shaikh was bouncy and irrepress­ible, but not very bright. Saajan and Shaikh did eventually develop a kind of friendship for themselves, to the extent that Saajan agreed to be his best man in the wedding, since Shaikh had no family of his own. In Ila’s case, she was virtually the sole parent to her daughter AND was looking after her mother and terminally ill father as well.

I don’t want to reveal the crunch part of the film, except to say that Ila finally decided to search for Saajan by asking the address where the dabbawalas sent her food. She went to Saajan's office to meet him, but was too late; he had already retired. The film goer is left with the question “but what of their futures?”

The best review of this film said the film dealt with the splendour of two people falling in love without having met, through an epistolary relationship; a sort of 84 Charing Cross Road, with extra pappadums. A literary device, if you will. I wish I had thought of 84 Charing Cross Road while I was sitting in the cinema watching The Lunchbox; it is one of my favourite modern novels.

Hi Hels, One thing I don't get. If Saajan got the lunch because of a mis-delivery, how could Ila contact him by simply sending a note and depending on the same mistake? I agree with you that this plot sounds slightly familiar, and it also appears to be an inversion of the mixed-penpals plot in which people who know and dislike each other write to each other unknowingly.

Complications aside, this sounds like just the kind of movie that I used to see and enjoy at the Cinematheque at the Art Institute in Cleveland.
--Jim

Exactly! In fact there were several continuity issues that stayed in my mind, but I believe they were all intentional. Even magical. The exchange of notes dealt with happy events, memories and anxieties that were absolutely real to these two small souls in a sodding big city.

I saw the film at the same festival you went to, but I wondered who the disembodied voice of Auntie, the upstairs neighbour, was. Husband and I decided Auntie was the closest Ila was going to get to female advice and wisdom.

At first I just noticed Ila was lonely, shut in, unemployed, with an emotionally absent husband, a daughter at school and ill, remote parents. Auntie upstairs, herself possibly a shut-in, was Ila's only human contact every day. Thank goodness for Auntie.

84 Charing Cross is one of most favoritest books! I am looking forward to this film when it comes here in the PNW!

Decades ago I read 84 Charing Cross Road, written by Helene Hanff and originally published in 1970.

The book moved me, not because it was well written (which it was). But because it told the true story of an American writer’s 20 years of correspondence with an Englishman, chief buyer for a London bookshop. From late 1949 on, the two strangers became very close friends - even though they never met.

The connection to The Lunchbox is irresistible.

I thoroughly enjoy reading your views on this movie. In India, this movie was widely acclaimed as one of the best in the year it was released.

welcome aboard :) I don't know how well The Lunchbox did with the general cinema-going public in Australia, but it has rated very well in every International Film Festival in the world.

What a lovely review Hels. I think I would love this movie and am going to try to track it down. I didn't know about lunchbox services! It beats me having to cart my lunchbox around on my new commute to work.

well worth your effort. The acting was excellent, the directing was tight and the photography was stunning. Just the huge numbers of people in Mumbai shocked me - which was surprising, since I loved touring north-central India.

I really appreciate your professional approach. These are pieces of very useful information that will be of great use for me in future.

thank you. I assume you have seen the film and that there is no serious rivalry between Mumbai and Delhi :)