First let me cite a glowing review that seems to represent the typical published response to Grand Budapest Hotel .  My own response, as you will see, was very different.

Peter Bradshaw in The Guardian wrote: This delirious operetta-farce is an eerily detailed and very funny work from the savant virtuoso of American indie cinema, Wes Anderson. It is set in the fading grandeur of a preposterous luxury hotel in an equally preposterous pre-war central European country, the fictional Zubrowka. This kind of milieu – the hotel spa or sanatorium occupied by mysterious invalids, chancers or impoverished White Russians – was loved by Thomas Mann and Vladimir Nabokov.

Ralph Fiennes is on glorious form as Monsieur Gustave, the legendary concierge of the Grand Budapest Hotel in the early 1930s: a gigantic edifice in the mountains. It's a cross between Nicolae Ceausescu's presidential palace in Bucharest and the Overlook Hotel in Kubrick's The Shining. It is a superb cathedral of eccentricity, with a gorgeous dining hall the size of a football field, a gasp-inducing canyon of a lobby area, with corridors and rooms encircling an exquisitely ornate galleried central space.

Gustave is energetic and exacting, taking a passionate pride in the high standards of his establishment and ruling the staff with a rod of iron. Like them, he is kitted out in a Ruritanian purple livery which matches the hotel's decor. Gustave affects an air of genial worldliness and deferential intimacy with the hotel's grander clientele, and despite the quasi-military correctness of his bearing in dealing with his subordinates, Gustave can also lapse into high-camp familiarity with the guests. Fiennes is absolutely brilliant.

Gustave decides to mentor the hotel's vulnerable lobby boy, orphan immigrant Zero Moustafa (Tony Revolori). It is to Zero that Gustave reveals the engine that drives his hotel's wellbeing: his ready, enthusiastic appetite for servicing the intimate needs of thousands of aristocratic old ladies who come back every year. 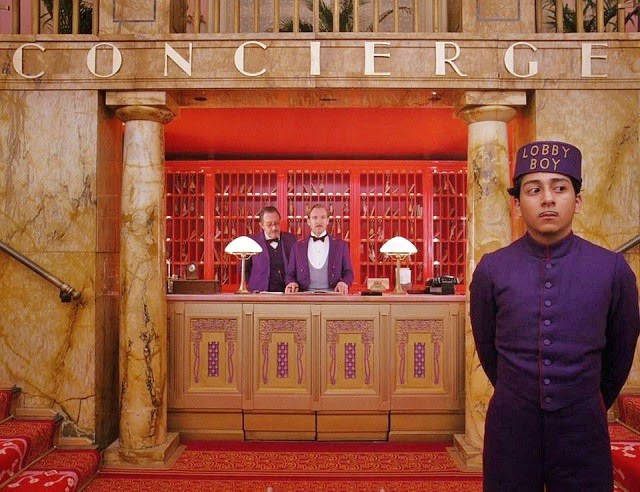 Guests are greeted at the hotel's reception desk, 1932.
Gustave H in the centre and Zero on the right

Gustave's greatest amour is the ancient and cantankerous Madame D, played by Tilda Swinton with wrinkly prosthetics and strange pale-blue contacts. The infatuated Madame D infuriates her sinister son Dmitri (Adrien Brody) by leaving Gustave, in her will, a priceless Renaissance portrait belonging to her family. Gustave is thus to face the family's fanatical attempts to disinherit this counter jumper, involving her butler, Serge (Mathieu Amalric) and Zero's courageous fiancee, Agatha (Saoirse Ronan), who works in the local Viennese-style patisserie. And there are numerous other cameos for all Anderson's repertory players.

As ever, Anderson's world is created like the most magnificent full-scale doll's house; his incredible locations, interiors and old-fashioned matte-painting backdrops sometimes give the film a look of a magic-lantern display or an illustrated plate from a book.

Alexandre Desplat's score keeps the picture moving at an exhilarating canter, and the script, co-written by Anderson and his longtime collaborator Hugo Guinness is an intelligent treat. Watching this is like taking the waters in Zubrowka. A deeply pleasurable immersion.

A more balanced review was Carljoe Javier's in GMA News who wrote those familiar with Wes Anderson are familiar with his distinct visual aesthetic - striking colour palettes, formalistically disciplined framing and a clear sense of it being a crafted piece of art. Anderson’s work does not ever attempt realism, but rather he tell fantastic stories (with or without elements of fantasy and the absurd) that communicate so much about the characters' humanity. That being said, some viewers might find the Anderson aesthetic to be overwrought, pretentious and even intolerable.

Now my own views. Perhaps I am at a disadvantage, not knowing Wes Anderson’s cinema history. I went to see the film Grand Budapest Hotel because I love a] the old Habsburg cities, b] art deco hotels and c] resorts that used to provide cultural outlets for residents during their summer holidays. So the setting in time (the 1932?) and place (Republic of Zubrowka hmm..Vienna?) was a strange basis for the story of a hotel concierge who teamed up with a junior hotel worker to prove his innocence on a murder charge. 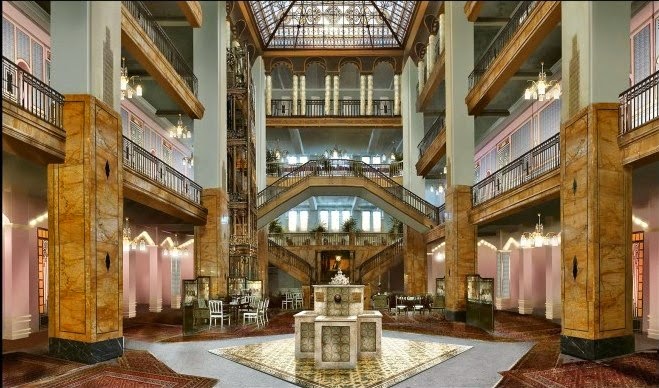 The hotel's salon was very grand in 1932,
a "superb cathedral of eccentricity"

The photography and sets in this film are truly gorgeous. I loved the hotel architecture and decoration, the fincular, baths, dining room, furniture, trams, palaces, snowy mountains, cable cars, palaces and especially the very Habsburg-looking Kunstmuseum. Klimt was used perfectly. Of course the sets were all too decadent for current taste, but then Gustave belonged much more to the late 19th century than to the 1930s, I suspect.

But the gun scenes and chases were too silly for words. Zero helping Gustave escape from Zubrowka's prison by sending stone­mason’s tools hidden inside cakes made by the fiancée Agatha was even sillier. Mick LaSalle of the San Francisco Chronicle reviewed the film saying that the film's sad undertone saves The Grand Budapest Hotel from its own zaniness. Or better yet, elevates the zaniness, making it feel like an assertion of some right to be silly, or some fundamental human expression. Mr LaSalle was almost right. The film’s sad under­tone did save Grand Budapest Hotel from some of its own silliness, but the silliness remained.

The link between this film and Stefan Zweig’s writing, as mentioned in the film credits, was unclear to me. Then I had a brain wave! In 1942, the Zweigs were found dead of a barbiturate overdose in their Brasilian house. Zweig had been despairing at the future of Europe and its culture. He wrote "I think it better to conclude in good time and in erect bearing a life in which int­el­lectual labour meant the purest joy and personal freedom.. the highest good on Earth".

I now agree with Tim Stanley of The Daily Telegraph - the European upper-crust was subversive! The film director understood that the elegance of the Grand Budapest was just a façade; that beneath the glitter was the cancer of greed and fascism. If that was true, Wes Anderson was more clever and worthwhile than I thought. Viva Stefan Zweig!

Playful innocence flirting with darkness just below the surface! That describes the Grand Budapest Hotel film - and it also describes our course on Vienna's Golden Age. Isn't hindsight accurate.

My partner had seen the movie and enjoyed it. I saw the movie as I was flying to Budapest. I don't think I can recall being as disappointed in movie as I was at that one. I found it truly awful and just boring, scenery notwithstanding. People may be able to read things into it, but I did not. There was nothing subversive and everything was very obvious.

Reading the first comment, has Vienna's golden age ended? Not from what I saw.

I was thinking about that tonight, in a discussion about the growth of nationalism leading to the collapse of the Austro-Hungarian Empire in 1918. New nations emerged, but still with rival ethnic groups within their boundaries. Remember in the film, we saw a green army march eastward and a brown army march westward and a blue army march south. It could have easily been the new nations of Czechoslovakia and Yugoslavia.

Re Vienna, I think 1938 was the end of the Golden Age. Up till then, Vienna had more: publishers, authors, musicians, theatres, scientists, Nobel Prize winners, artists, architects, glorious hotels etc than any other city, even much bigger cities.

Hello Hels, It's hard to tell whether I would like this movie or not from your comments. The setting and overall background seem appealing, but the silliness decidedly does not. I basically have given up seeing new movies; even some that I bought on DVD and was looking forward to are still in their shrink-wrap, including some by Jan Svankmajer. Maybe this winter I'll get some free time.
--Jim

the majority of reviewers enjoyed the film very much, particularly those who are familiar with Wes Anderson's work. I struggled mightily to find even a mixed review.

Received this note via email:

I thought the fading grandeur of a silly luxury hotel in a silly central European country was fun. It felt as if I was back with mum and dad in Budapest, drinking spa water in the late 1930s.

I remember your mum well.. she was an elegant Hungarian lady. She probably would not have thought the Grand Budapest Hotel was over-the-top at all :)

Yet Another Magyar said...

We don't know much about the identity of Madame D's murderer or how Gustave was proved innocent, but that might have been due to imminent war. In war, even normal events are turned upsidedown.

That is true.. The period just before war starts must be a fearful and uncertain time. But when the nation is united against an outside enemy, people pull together. How different from the situation in this film where the conflicts were as much internal as external, and constantly changing.