Otto Dix and the catastrophic World War One.

In July 2014 the Albertinum in Dresden had an exhibition called Otto Dix. The War. The Dresden Triptych. Note the date - the 100th anniversary of the outbreak of war.

Prior to 1914, Expressionism in art was largely apolitical. Artists might have seen themselves as aesthetic progressives but they had no allegiance to a broader social re­volution, beyond feeling a general disdain for The Philistine Bourge­ois­ie. If the early Expres­sion­ists banded together in groups at all, it was only to protect their creative autonomy against an often hostile majority, and not because they shared a strong political belief.


When Germany entered WWI, many of the Expressionists yearned for a more modern, democratic Germany. They did not despise France and Brit­ain, so why did many of them voluntarily enlist in Germany’s armed forces? In the months leading up to the war, young men were exposed to an idealistic recruit­ment mess­age that had been combined with patriotic fervour. Germany was not the aggressor, these messages said, but rather an av­eng­ing angel.

The artists’ own writings suggested two reasons why educated, thinking young men would go into the army. Many of the artists seemed to have believed that the Great War would actually be the starting point from which many long-overdue changes to their country's social structure would occur. Secondly the artists may have been anxious to experience the affects of war first hand, believing that it would greatly influence their artistic sensitivit­ies. Both motivations turned out to be wrong, but hindsight is a wonderful thing. 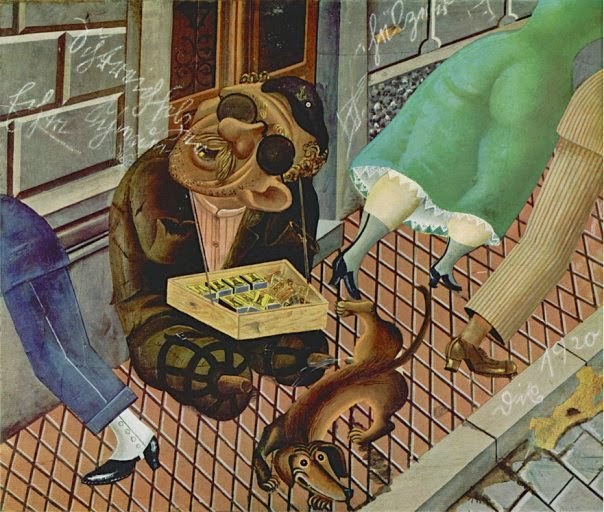 When WW1 started, Otto Dix (1891-1969) had not yet been conscripted; he act­ual­ly volunteered to fight and was sent to join a field artillery regiment in Dresden. In 1915 he was ass­igned as a non-commissioned officer of a machine-gun unit in the Western front and took part of the Battle of the Somme. He was badly wounded three times but it wasn’t until 1917 that his unit returned from the Eastern front in the war against Russia. Then Dix was sent back to the western front where he earned the Iron Cross.

In his foreword to a 1919 art exhibition catalogue, Will Grohmann int­roduced Dix’s five paintings: Leda, Pregnant Women, Moon Women, Resurrection of the Flesh and Prometheus. All ugly and threatening.

Dix was profoundly affected by the sights of the war, and later de­scribed a recurring nightmare in which he crawled through hell. Through his art, he returned to the desolated landscape of military trenches strewn with mutilated bodies, brutalised by mechanised warfare. The dead were distorted by decomposition and hidden in gas masks & steel helmets.

He continued painting well after the war, looking at the surviving soldiers as they tried to integrate back into civilian society. The Match Seller 1920 was a pitiful and mutilated ex-serviceman who had to earn a living, despite losing his limbs and vision in war. His deformities were so visible that normal German civilians ran away from the sight as fast as they could. Only the dog did not flee in horror.

Der Krieg 1924 was a series of  50 etched prints, presumably modelled on Goya’s The Disasters of War series. They were starkly realistic, mundane and horror-filled at the same time. Supporters of Dix believed this body of work was essential viewing and so the series became one of the most powerful indictments of war ever conceived.

Dix’s monumental triptych The War (1929-33) is owned by the Galerie Neue Meister in the Albertinum. As one of the most eminent works in which Dix explored the horrors of WW1, it was the star of this exhib­ition. The catalogue reiterated that the uncompromising depictions of wound­ed and dead soldiers were etched into our collective visual mem­ory. The fact that German young men were our enemies was irrelevant – a dead 18 year old lad lying in the mud was some mother’s son, regardless of which side he fought for.

It took Dix four years to complete the four panels in the triptych, a structure that looks at first glance like a church altarpiece. Nothing was left to the imagination. The triptych depicted intol­er­able levels of morb­idity with putrefied flesh, worms and gangrene; the dead and wounded men were no longer human beings.

Perhaps Dix was already reflecting the nationalism that was surging in the increasingly tense political atmosphere of the Weimar Republic during the Depression years. His critics certainly hated what they perceived as his anti-German, hypercritical views of WW1 and the post-war society.


Dix was only one of the artists who depicted the emotional drama and psych­ological intensity of war. Consider George Grosz who volunteered for military service in 1914, in the hope that as a volunteer and not a conscript, he would not be sent to the front. After the war Grosz was accused of insulting the army with his art and was severely punished. Max Beckmann, Ernst Ludwig Kirchner, Conrad Felixmüller, Lovis Corinth, Franz Marc and others also became soldier-artists.

Painted after Ernst Kirchner’s nervous breakdown, Self Portrait as a Soldier 1915 (Oberlin College Ohio) was a small, harrow­ing image that showed a wounded soldier. But this was not just any old soldier with any old wound. This was an artist-soldier who found his painting hand had been blown off by a mortar. I can think of no better way for an artist to express his own pain and loss. Like Dix, Ernst Kirchner clearly had very dist­urbing visions in his head. 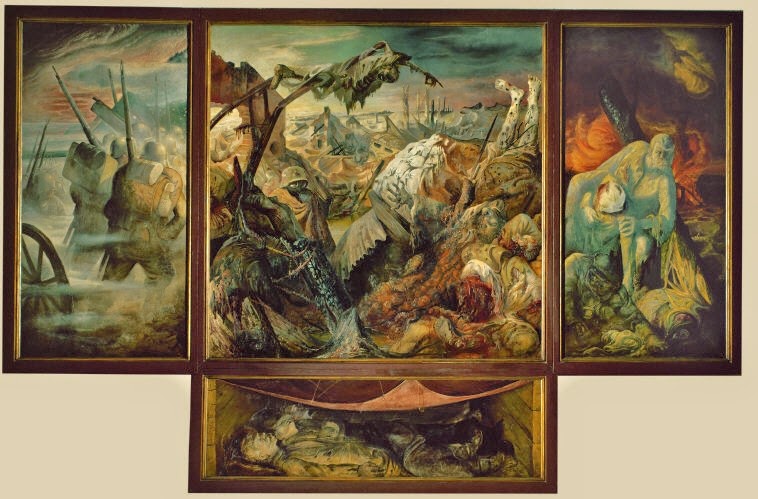 For an amazing collection of paintings by soldier-artists in World War One, see the blog Weimar. Another very useful analysis can be found in the blog My Daily Art Display.

Deep and moving stuff. I think a lack of news sources must have played a big part in artists enlisting to fight.

I assume every soldier who witnessed death and decomposition was traumatised in the same way. Dix was fortunate in being able to express his nightmares in art. What did other ex-servicemen do?

Hello Hels, So many people who went through traumatic experiences like war, the Depression, the Holocaust, the Khmer Rouge, etc., later never wanted to talk about their experiences. Many of my older relatives were like that, and now I regret not asking them more about their lives. If this reticence was the common reaction, it makes it more important to regard the works of artists like Dix, who were able to express these strong and disquieting feelings.

You mentioned in passing that Kirchner's Self-Portrait is in Oberlin, Ohio. The Allen Art Museum at Oberlin College, as I'm sure you are aware, is an exceptionally fine and interesting museum, (among their specialties is Japanese ukiyo-e prints) and is well worth a visit if you happen to find yourself in Northern Ohio.
--Jim

I vaguely understand that the Great War might have been the starting point to modernise Germany's social structure. And I do understand that artists may have wanted to experience war themselves. But armies exist to kill soldiers (and civilians?)from every other nation, not to promote a social revolution at home.

I think you are correct. Those poor young men, and their families, were told nothing by the governmental and military authorities.

the medical literature suggests that after WW1, anxiety, depression and shell shock were well noted, but that psychiatric support was not made available. Gangrenous legs were amputated and glass eyes inserted where necessary, but night terrors were not treated.

I wonder if Ernst Kirchner, George Grosz, Otto Dix and the others found their own art to be at all theraputic.

Artists like Dix WERE able to express their terrible post-war terrors in art, but I suspect they paid a steep price for their art. Which German gallery or collector would buy the "provocative" or "treacherous" paintings? Dix, Grosz and perhaps others became despised in parts of German society.

I used to get to New York and the NE corner regularly when my uncle was still alive. Now I will have to make a special trip, including northern Ohio. Thank you :)

"Perhaps Dix was already reflecting the nationalism that was surging in the increasingly tense political atmosphere of the Weimar Republic during the Depression years. His critics certainly hated what they perceived as his anti-German, hypercritical views of WW1 and the post-war society."

Weimar society was bitterly divided. The government was progressive and democratic but the right wingers were developing a strong and nasty form of nationalism.

Dix was attacked by both sides, wasn't he? The extreme right hated his views of the WW1 and felt he was a traitor to Germany. Yet he also satirised celebrities from Germany's intellectual circles, so Weimar democrats didn't necessarily adore him either.

His work became even darker in the early 1930s, and naturally he was most hated by the Nazis.