Chagall Vs Malevich in Russia: Vitebsk

Directed by Alexander Mitta, a film dramatisation of Marc Chagall’s life is being shown at the Australian Centre for Moving Images in Melbourne. The film Chagall-Malevich is based on the era of Chagall's short-lived role as commissar of arts in Vitebsk in 1917-18. During this time he founded the Academy of Modern Art and heard about his contemporary and stylistic oppos­ite, Kazimir Malevich. So it is approp­riate that many art works by Chagall and Malevich were used in creating the film.

But what was the real connection between the two geniuses who both found themselves in Vitebsk after the Revolution?

Kazimir Malevich (1879–1935) grew up near the Russian city of Kiev, now in the Ukraine. He spent most of his Catholic childhood in agricultural settlements far from centres of culture. At school he knew nothing of professional art, although peasant art had surrounded him in all its genres. It was only by moving north that he, in his mid 20s, could study at the Moscow School of Painting, Sculpture and Architecture from 1904-1910.

Malevich had never visited Europe at this stage of his life. In 1915, he founded Suprematism, a new form of Russian art. Suprem­at­ism was an abstract art that was based on “the supremacy of pure artistic feeling” rather than on visual depiction of objects. It privileged basic geometric forms and strong colours.

Marc Chagall (1887-1985) grew up near the Russian city of Vitebsk, now in Belarus. His Jewish parents ran small businesses and didn’t have any money, but he was surrounded by books, Chassidic practices and a passion for education. In 1906, he started art briefly at the Vitebsk studio of realist artist Yehuda Pen. There Chagall met other students who later became famous, El Lissitzky and Ossip Zadkine. Then he moved to St Petersburg, the country's centre of artistic life with its famous art schools; Chagall enrolled in one of them and studied there for two years. 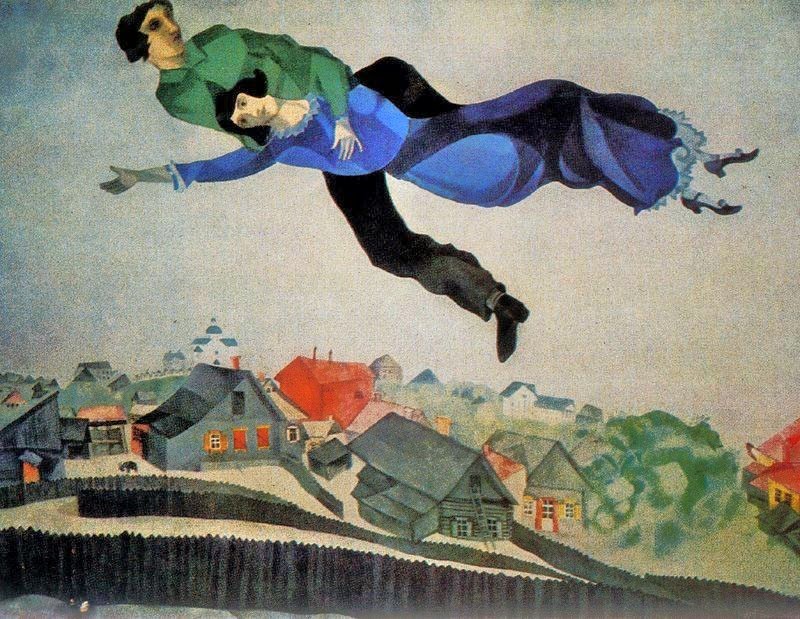 Chagall lived and worked in Paris from 1911-14. He was influenced by French art and was in close contact with the Paris-based Russian Jewish artists, including his old friends Ossip Zadkine and El Lissitzky, and new friends Chaim Soutine, Pinchus Kremegne and Michel Kikoine. They spoke Russian and Yiddish to each other, and learned French in Paris' coffee shops.


Chagall returned to Russia when WWI broke out, remaining there until 1922. During this period, his home city of Vitebsk directed his life and work. It was there in July 1915 that he married local woman Bella Rosenfeld and they went on to have a daughter. Vitebsk became a fav­our­ite subject for Chagall, as can be seen now in Mos­c­ow’s Pushkin Museum and in the National Russian Museum St Petersburg. He never let go of figurative art, but the elements of cubism were visible in his paintings.

Many Chagall paintings created in Vitebsk were exhibited in April 1916 at the Artistic Bureau in St Petersburg, followed by an exhib­ition in Moscow called Works from the Series Executed in Russia (Vitebsk 1914–1915). Malevich presented many works at the same exhib­ition, called Suprematism of Painting. Although they were close in age, language and career choice, Chagall and Malevich had probably never met before. If anyone was close to Malevich, it was actually El Lissitzky who viewed Malevich as his Suprematism mentor.

In 1918 Chagall was made the Commissar of Plastic Arts for Vitebsk, a position aimed at developing the city’s artistic life, especially urban design. His mandate was to organise art schools, museums, exhibitions and lectures on the visual arts in the entire Province. His first project was the Vitebsk People’s Art College, founded in late 1918. The next year was spent setting up community studios for the product­ion of paintings, sculptures, signs and posters.

The former Russian Empire had abruptly ended, as had its cultural organisations. So Chagall planned to follow the modern model of the Free Studios that had been recently created in St Petersburg and Moscow.

The Vitebsk People’s Art College had teachers from every art move­ment, from the realism of Yehuda Pen (who had trained Chagall and Lissitzky back in 1906), to the Suprematism of recently arrived Malevich. Chagall was organising teachers for applied arts, painting, art history, sculpture and graphic arts. The programme included theoretical study of contemporary art methods; design of applied arts: wallpaper, embroidery, bookbinding, wood painting; and practical courses.

Nearly 200 students enrolled at the People’s Art College and changed Vitebsk from a provincial backwater. Thanks to the October Revolut­ion, revolutionary art was doing very well. Chagall clearly thought of himself as a leftist artist of the avant-garde. 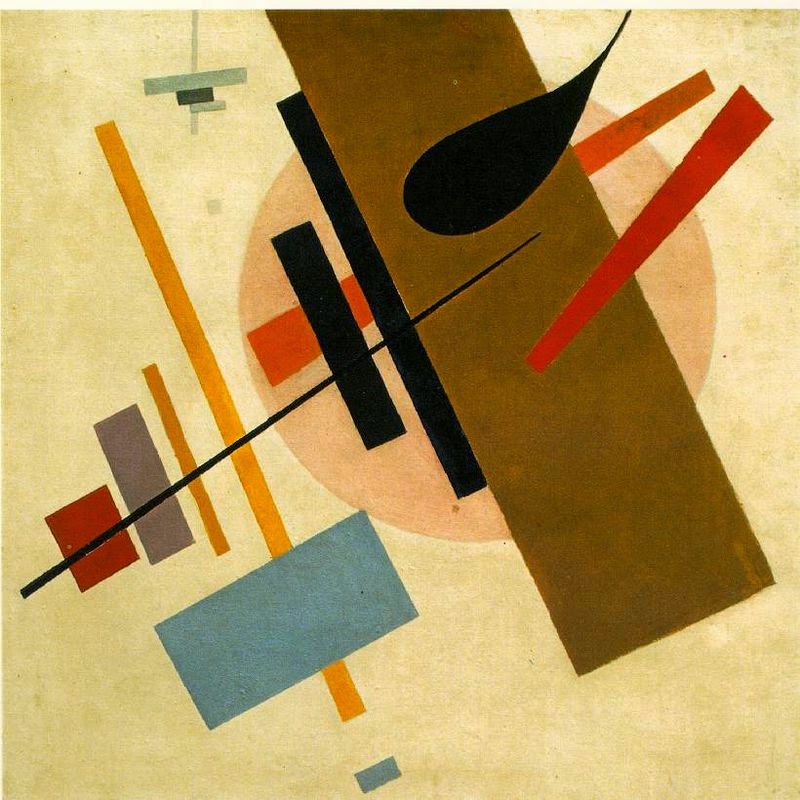 
The peaceful coexistence of the various art trends could be seen in the early photographs where all of the teachers stood side by side, as well as in the formal agreements signed by Chagall and Malevich. In April 1920, Chagall informed art critics that there were young people around Malevich and around himself. Both of them were mak­ing their way to the circle of leftist art, albeit in different ways.

Alas it didn't last. Several times an unhappy Chagall thought of leaving Vitebsk because of bureaucratic harassment and short­ages. But he was happy with the First National Exhib­ition of Paintings by Local and Moscow Artists. The 41 artists included leading avant-garde players: Chagall of course plus Kandinsky, Malevich and Rodchenko.

The young Vitebsk artists became attracted to Malevich’s total com­mitment and his seductive, prophetic speeches. These artists turned away from Chagall and towards the UNOVIS/Champions of New Art, created early in 1920. By May 1920, all of Chag­all’s students had moved to Malevich’s studio, the newly formed School of Contemporary Art.

Chagall officially resigned in June, and was soon in Moscow producing stage sets and costumes for Yiddish plays by Sholem Aleichem at the Jewish Chamber Theatre. For the rest of his long life, Chagall never returned to his beloved Vitebsk.

Who is better known and loved now, Chagall or Malevich? I think if you asked random people on the street, they would not even know the name Malevich.

Malevich influenced and radicalised Alexander Rodchenko, Wassily Kandinsky, El Lissitzky and the entire Bauhaus. People took note of Malevich's manifesto, published at the same time as the 1915 exhibition, "Cubism and Futurism to Suprematism in Art".

But he gave up Suprematism in the 1920 and his influence faded. I think you might be right... everyone still knows Chagall but who knows Malevich these days?

Kazimir Malevich, an artist as influential as he was radical, cast a long shadow over the history of modern art. This exhibition, his first retrospective in thirty years and the first ever in the UK, united works from collections in Russia and elsewhere to tell of revolutionary ideals.

The book, edited by Achim Borchardt-Hume, Head of Exhibitions at Tate Modern, is still available.

Excellent. I note that two rooms were filled with Malevich's Suprematist works.

But if Black Square was one of the defining works of Modernism, revealed to the world after months of secrecy, why was it hidden again for almost half a century after its creator’s death?

The second painting by Malevich reminds me a little of Paul Klee works - is there a connection in time?

I have no idea if they ever met each other, but their abstract shapes were not totally dissimilar, were they? Perhaps their differing ideologies meant that Malevich’s geometry was powerful while Klee's was much less so.

I'd not heard of Malevich before. I still prefer Chagall, because for me his works are more evocative. I feel something when I regard a Chagall.
Having looked at several Malevich works since your post I find them jarring, but then they are quite different in style.

I too prefer Chagall and also because his works were more evocative of a beloved world that disappeared. But perhaps that was Malevich's very point. Malevich saw himself as revolutionary, modern, avant-garde and looking to the future. Malevich saw Chagall as backward looking.